Aiming to beat the on-ear market.

The Beats Solo Pro is for the listener who's always on the move. Noise cancelling is surprisingly effective for a pair of on-ear headphones. Although the sound signature remains bass-heavy, as is emblematic of Beats, it rarely overpowers vocal reproduction.

The Beats Solo Pro take sound and design seriously. These are the company’s first noise cancelling on-ears, and Beats hit it out of the park with one exception: comfort. Time to find out if it’s worth pushing past the pain for these otherwise exceptional on-ear headphones.

Who is the Beats Solo Pro for? 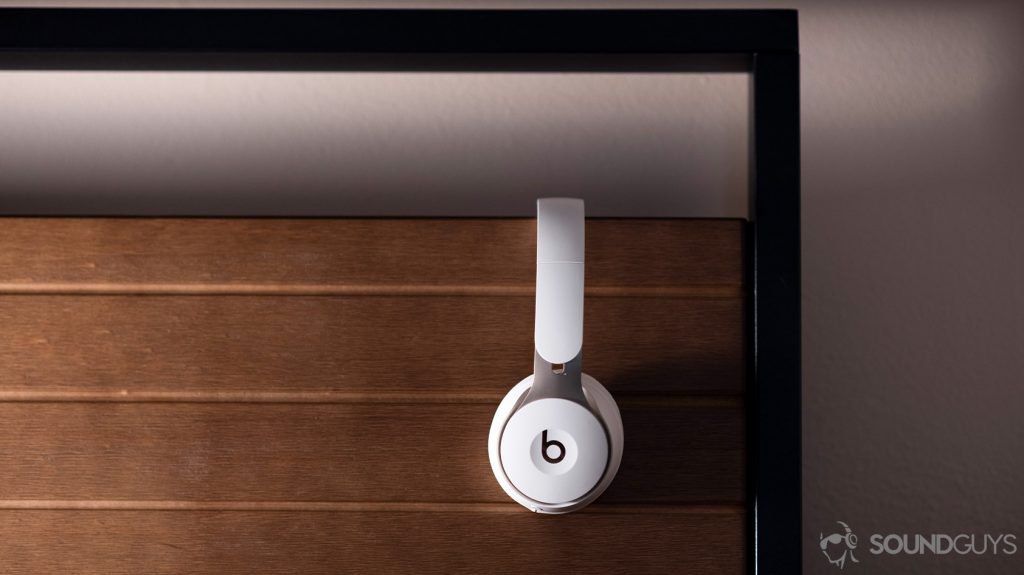 The cloth carrying pouch doesn’t do much to protect the headphones.

The Beats Solo Pro noise cancelling headphones showcase a striking, mature appearance. The concealed hinges maintain a streamlined design, and the headband extension mechanism is nearly undetectable. Limited degrees of rotation are allowed in every direction. This design is meant to increase comfort by allowing the ear cups to rest along with the natural angle of your ears. Yet, it can’t negate the immense pressure placed on the head. After an hour of listening, it felt like I was removing an expensive clamp, rather than a pair of headphones. If you have glasses, comfortable listening time is halved.

Pressure from the headband makes the headphones uncomfortable after an hour of listening.

Just like a Thanksgiving turkey, these headphones are stuffed. A speech-detecting accelerometer works in tandem with the beam-forming microphones to detect when you’re speaking. Ideally, these technologies work to transmit just your voice and reduce background noise by combating sound caused by the movement of your head. Unfortunately, the microphone performance falls a little bit short of our expectations.

The Beats Solo Pro are some of the best Beats headphones to date.

The Beats Solo Pro are available in six colorways: light blue, dark blue, red, black, gray, and ivory. No matter which color you get, a soft zippered pouch and Lightning cable are included. Apple-owned Beats didn’t integrate a 3.5mm input. This makes sense seeing as Apple leads the charge in killing off the headphone jack. However, it’s a shame for Android users whose phones retain the auxiliary audio connection.

How to make commands and switch between listening modes 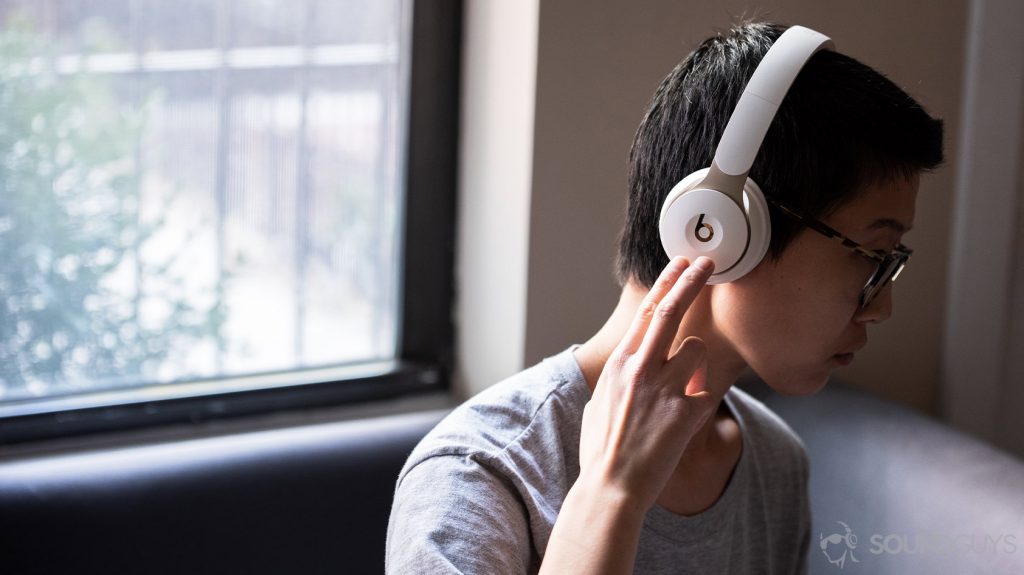 Android users need to hold the “b” logo down for a few seconds to access Google Assistant.

The left ear cup houses a new button for toggling between noise cancelling, transparency, and extended power mode. Transparency allows ambient noise in, so you can stay aware of your surroundings.

In order to make playback or call controls, you have to press the right ear cup. This large, tactile button is easy to operate bare-handed or with gloves. Pressing the Beats logo acts as a multifunction command, while pressing on the edge above or below the logo adjusts the volume. If you have an iPhone, you can just say, “Hey Siri,” for hands-free virtual assistant access. Google or Alexa users need to hold the “b” logo down for a few seconds.

Do the Beats Solo Pro have good noise cancelling? Low-end attenuation is fantastic given that these are a pair of on-ear headphones.

In a departure from their early noise-cancelling models, Beats hit the nail on the head with its on-ear ANC technology in the Beats Solo Pro. It uses real-time audio calibration to automatically adjust noise cancelling intensity. A big problem with on-ears is their inability to passively isolate listeners from their surroundings. If you can’t get a good seal with the headphones, ANC is usually a lost cause. The clamping force of the headset is so great, however, that a secure fit is easy to come by. Again, performance is at the expense of comfort.

The chart above depicts just how well the Beats Solo Pro cancel noise. The higher up the line, the more those notes are attenuated. As you can see, even bass frequencies (everything left of 260 on the plot above) are blocked out by the Solo Pro. This is impressive since low sounds are the hardest to block out. However these aren’t going to compete with something like the Sony WH-1000XM3. On-ears don’t seal around your ears, so outside noise can still reach your eardrums through the gap between the headphone padding and the side of your head.

How do you connect the Beats Solo Pro? 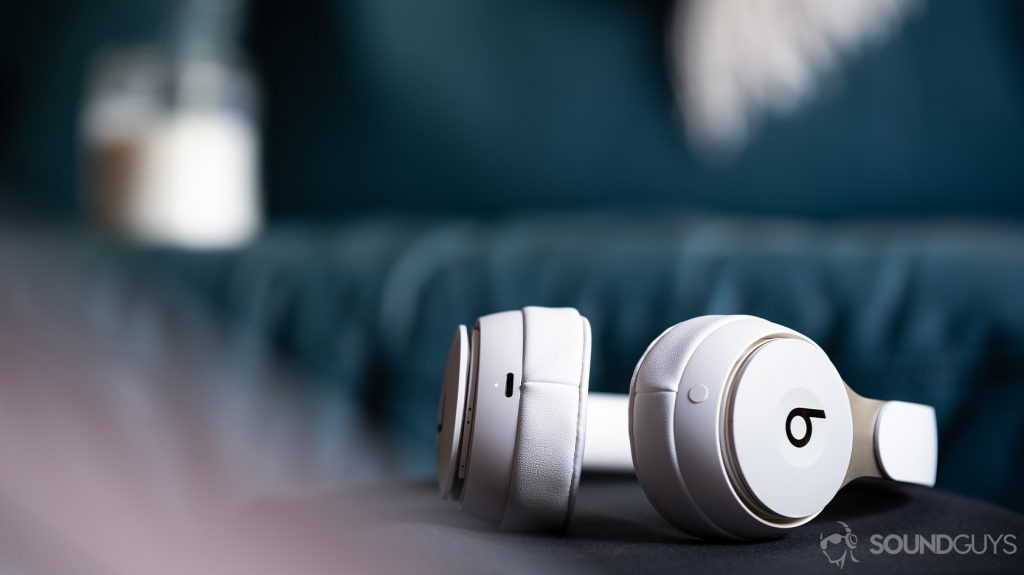 Beats omitted a 3.5mm input. Your only option for connecting the headset is to go wireless.

Like the AirPods and Beats Powerbeats Pro, the Beats Solo Pro feature Apple’s latest H1 chipset. Upon unfolding the headset, pairing is instantaneous with iPhones. If you’re an Android user, you’ll still have to manually open your phone’s Bluetooth settings and select the Solo Pro. Once paired, the headphones will automatically reconnect to the last used device when unfolded. The act of folding or unfolding the headphones acts as the power toggle, too.

These Class 1 Bluetooth 5.0 headphones support high-quality AAC streaming. Our testing indicates iPhone users will get the most out of this, as the codec’s performance on Android is unreliable. If you’re an Android user who wants optimal wireless audio quality, you’ll have to look elsewhere. Fortunately, there’s no shortage of great Beats alternatives.

iPhone users benefit from Apple's H1 chip in side of the Solo Pro.

To my dismay, these don’t support multiconnect. Alternating between source devices requires manual intervention. It’s not a dealbreaker, but it is annoying given how expensive the headphones are. On the flipside, connection strength is excellent. I never experienced any connection stutters or skips during testing.

How long is the Beats Solo Pro’s battery life?

Beats claims a 22-hour battery life with noise cancelling turned on. We recorded nearly that, squeezing out 21 hours, 53 minutes of 75dB playback from a single charge. If you need more than that, you can get approximately 40 hours of battery life with noise cancelling and transparency mode turned off. Like other Beats products, the Beats Solo Pro support Fast Fuel charging. By charging the Solo Pro via the included Lightning cable for 10 minutes, you get three hours of juice. That’s enough for a round-trip work commute and then some. Sub-bass and upper midrange frequencies are the most emphasized, which is good for most pop and hip-hop.

As is typical of Beats headphones, the Solo Pro adopt a bass-heavy sound. The sub-bass is relayed twice as loud as fundamental vocal frequencies (~250-400Hz), which causes some noticeable “missing” notes in your music (see: auditory masking). Additionally, you can hear some string instrument resonances in spite of the exaggerated bass response.

Despite being closed-back on-ears, the Beats Solo Pro do a fine job at rendering a seemingly realistic representation of 3D space. If you want to get the most out of their default sound: hip-hop, rap, and pop are the best genres to listen to. As discussed earlier, passive isolation is great. This enhances low-end reproduction and makes the active noise cancelling technology evermore effective.

The Tones and I’s song Jimmy opens with a Db-Ab chord pattern to set the somber tone. Toni Watson enters after the second pass. The detail in her voice remains fairly clear until the first chorus at 0:34. Here, the clapping, bass line, and more aggressive piano chords mask Watson’s vocal resonances. The words are still audible, but you don’t perceive the same sense of detail and slight vibrato as you do with more neutral-leaning sound signatures.

Bass frequencies bode well for this song in particular as the extra low-note impact emphasizes the pained reminiscent feelings the song elicits from the listener. The final chorus (2:42) feels more effective in the immediate sense because of the emphatic bass reproduction. The low notes are produced even louder than the audio engineer intended which works to further underscore Watson’s forlorn, yet powerful tone. Unfortunately, microphone quality is one of the worst things about the Solo Pro.

If there’s a downside to the Beats Solo Pro, it’s the microphone. The beam-forming mics led me to have high hopes for the microphone quality. Unfortunately, low-end attenuation is too great to accurately reproduce vocals. As illustrated by the demonstration below, my voice sounds muffled, distant, and outstandingly inaccurate. Put plainly, you’re best off using your smartphone’s microphone for both professional and personal calls.

Should you buy the Beats Solo Pro? 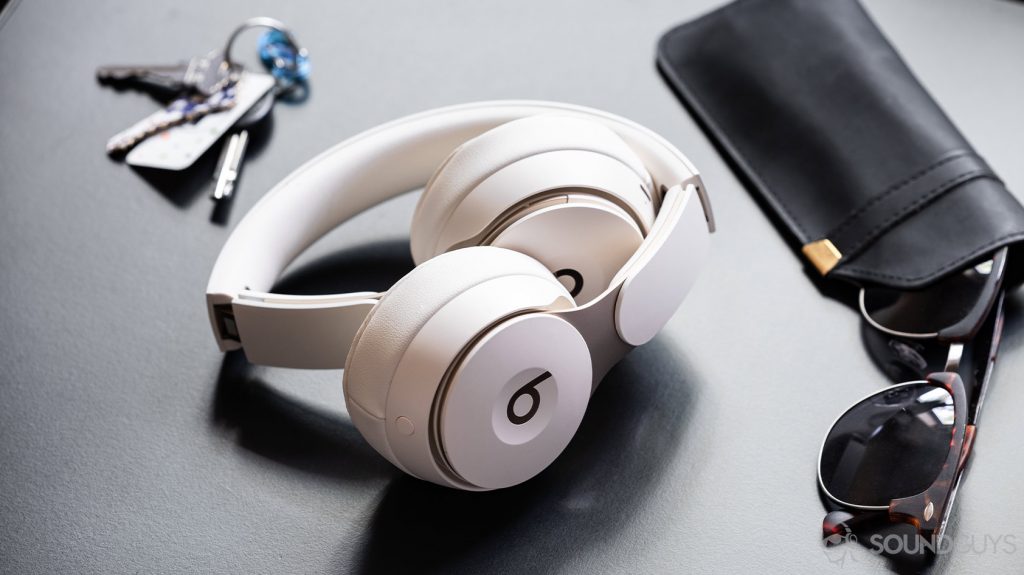 The button on the left ear cup lets you cycle through listening modes.

Yes, these are the best Beats Solo headphones to date. If you can pardon the microphone quality, expense, and comfort, you’ll find the Beats Solo Pro an easy-to-love pair of daily headphones. For better or worse, the discomfort is a necessary evil that enables such excellent noise cancelling.

If you’re not willing to sacrifice comfort for a slightly smaller build, the Sony WH-1000XM3 are still our go-to ANC headphones. These afford plenty of features like Ambient Aware mode, touch controls, and granular EQ adjustments. Battery life is impeccable, too. Otherwise, the Bose QuietComfort II is still a fabulous pair of noise cancelling headphones that have since been reduced in price thanks to the newer Bose Headphones 700.

Next: Better sound than Beats for under $100