It's easier than it looks. 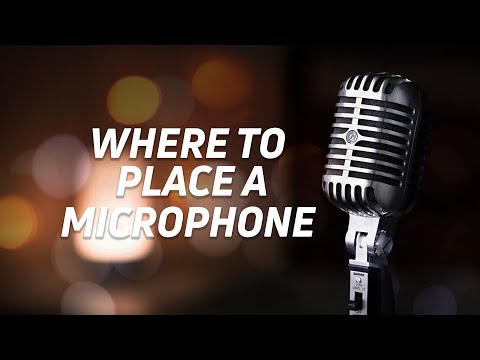 If you’ve ever read specifications or reviews on microphones, you’ve probably stumbled across a polar pattern before. Together with frequency response, they define a microphone’s most important characteristics. These polar charts are meant to show you how the microphone responds to the sound around it, and in this article, we’re going to help you interpret them. Be sure to watch the video above if you simply want to know where to place your microphone once you understand its polar pattern.

Editor’s note: this article was updated on June 14, 2021, to expand on technical information.

We’ve added the microphone graphic to help explain the chart.

To better explain this, manufacturers will include what’s called a polar pattern on the box, or in the documentation, to show users what the pickup pattern is like—but the axes and traces aren’t often explained.

Essentially, the blue line illustrates where the microphone will pick up the signal optimally. But what do all those confusing terms about pickup patterns mean? Let’s take a look!

This type of microphone captures sound from all directions at once. If you’re looking to buy a lapel microphone for an interview, or are going to be on camera, you’re probably going to run into this pickup pattern in most of the products you look at under $100.

While these mics are great for capturing a room’s ambiance, it’s not so great if you’re recording in a noisy environment, need to isolate a person speaking, or pick out a singular musical instrument among many.

If you studied Latin in high school, you’d know that all “cardioid” means is “heart-shaped.” That describes the basic shape of this type of microphone’s pickup pattern.

This type of microphone is good at capturing a sound that’s generally in front of the recording element, but it can be at an off-angle and still be fine. This is probably the most common type of pickup pattern for consumer microphones, as it is very forgiving on the user for its placement, while also preventing unwanted sounds from behind the mic from showing up in your recordings.

A hypercardioid mic has a tighter pickup angle and offers more side-rejection than a cardioid pattern. It is, however, slightly sensitive to sound sources that are directly behind the mic.  A hypercardioid recording pattern provides better isolation from room noise and nearby instruments and can offer better feedback resistance than a cardioid mic, but you need to maintain a more consistent position directly in front of the mic. This type is exceptionally useful for recording certain instruments like drums, and recording on-camera audio (in what are called “shotgun” mics).

Also known as a “figure 8,” this pattern can pick up sounds from both the front and back of the microphone. This type of microphone is less common and has limited applications. Sounds coming from directly in front of and directly behind the microphone will be picked up easily by this type of unit.

A bidirectional microphone picks up sound from in front and behind the diaphragm.

Typically, these microphones will look nothing like the microphone illustration in our diagram, but more like our old standby the Blue Yeti X. You will need to angle the microphone straight up, or upside-down so that the diaphragm is facing your subject, rather than merely pointing the protective grill at whatever you want to record.

The above diagram gives a nice overview of the microphones we’ve discussed so far, and includes the lesser-known sub-cardioid type that falls right between omni and cardioid.

So far we’ve considered how a general polar response applies to each microphone, but in reality, it’s not that straightforward. The polar response actually changes with frequency. To more accurately describe any given microphone, multiple polar plots are required to illustrate how it behaves at specific frequencies.

Multiple polar patterns on one chart showing the variation over frequency for an omni mic.

In the above more comprehensive polar pattern chart, we can see that what’s referred to generically as an omnidirectional microphone can actually become quite directional at higher frequencies.

Multiple polar patterns on one chart showing the variation over frequency for a cardioid mic.

In this more comprehensive polar pattern chart, we see that the cardioid pattern isn’t consistent across frequencies: at low frequencies, it’s closer to omnidirectional, getting more directional as frequencies increase.

As we have seen, a microphone’s polar pattern can tell you a lot: which microphone to pick for a particular job, and how best to place and angle that mic to make the best use of its directional characteristics.