The Sony WH-1000XM3 was the reigning king of noise cancelling headphones, does its follow up, the WH-1000XM4, manage to steal the crown?

When it comes to noise cancelling headphones, Sony has ruled the roost for a few years now. Since the release of the company’s landmark WH-1000XM3, pretty much the best every other company could muster has been in contention for second place. However, now that the Sony WH-1000XM4 is out, who’s the real top dog?

Much like when the WH-1000XM3 came out, the newer model hasn’t rocked the boat much, keeping the look virtually identically, and making largely incremental improvements. However, the comparison isn’t so cut and dry—newer doesn’t necessarily mean better, and a few of the tradeoffs the WH-1000XM4 makes might send you reaching for last year’s (or the year before last, rather) model. Let’s break it down.

The Sony WH-1000XM4 has all of its predecessor’s features, and then some 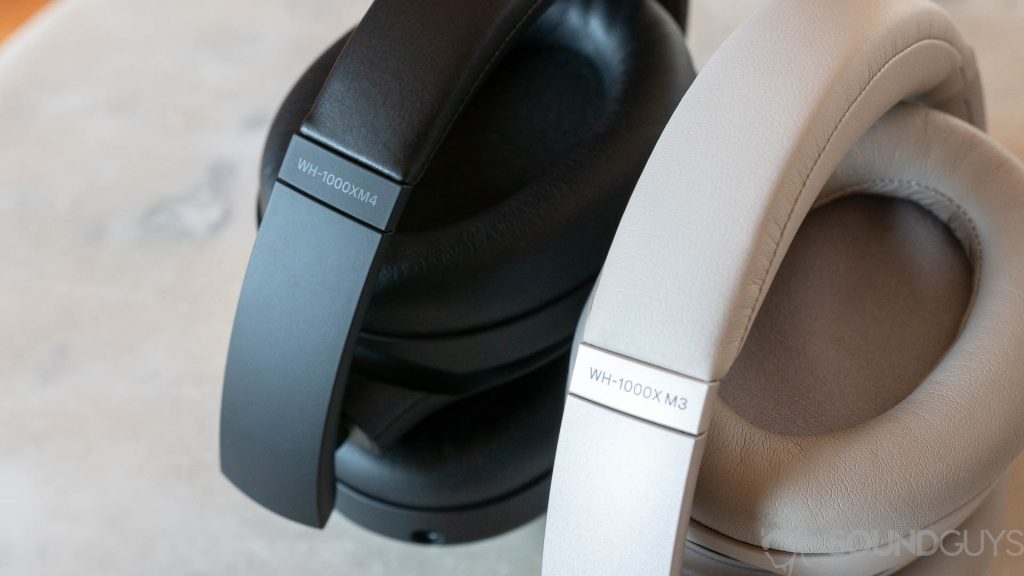 These headphones are almost physically identical.

This is one of the most straightforward points of comparison between these Sony headphones. The Sony WH-1000XM4 can do everything the Sony WH-1000XM3 can, and it offers a couple new hardware tricks to boot.

Both headsets offer touch controls on the right headphone that let you pause, play, adjust volume, skip, and backtrack with various taps and swipes in different directions. While the feature itself is largely the same, the execution isn’t. The Sony WH-1000XM3 sensors are extremely sensitive, and this is cause for frequent, accidental inputs from bumps, nudges, and brushes. The controls were so responsive that it became annoying. With the WH-1000XM4, Sony tried to correct this, and may have gone a little too far. In our review, Adam found the newer model’s touch controls to be unresponsive. In fact, he ended up leaning more on other control methods, because things were so unreliable. 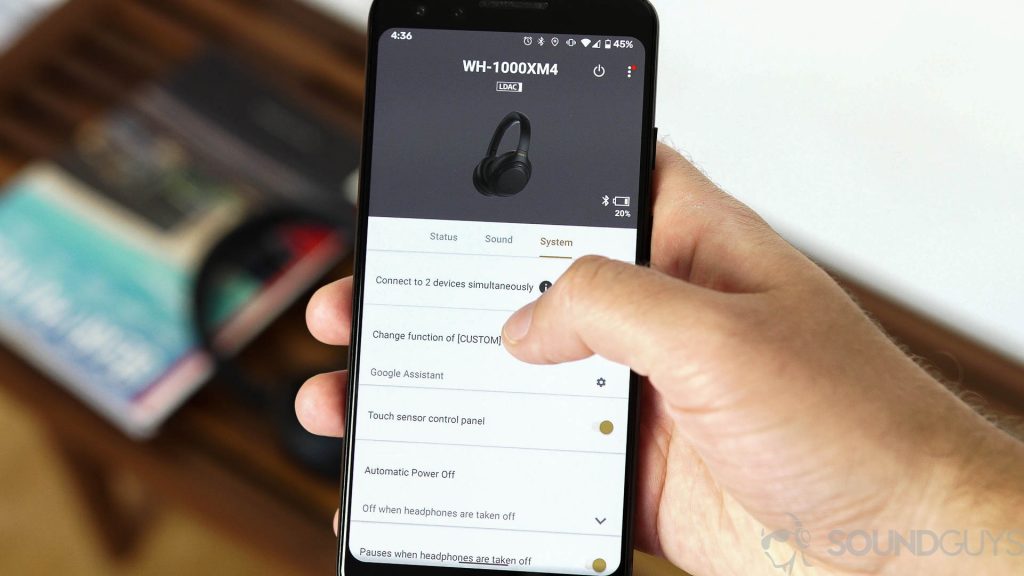 While the app isn’t the prettiest it gives you access to all the customization options you need and even some special features.

Both headsets also sync up with the Sony Headphones Connect app, which brings access to a whole suite of features. You may use the app to set custom EQ profiles and use preset ones, access Sony 360 Reality Audio, and enable ambient sound control, which creates different noise cancelling profiles for different environments.

The Sony WH-1000XM4 also adds a speak-to-chat function, which pauses whatever you’re listening to when you start talking. The feature works well—maybe a little too well—Adam mentioned the headphones pausing playback when it registered his chuckles during a podcast.

The newer Sony headphones also come equipped with a few extra sensors inside the ear cup. These pay attention to when you actually have the WH-1000XM4 on your head, and pause whatever’s playing when you take them off. This feature works very well, and in fact Adam found himself relying on it when the touch controls were less responsive than he wanted. 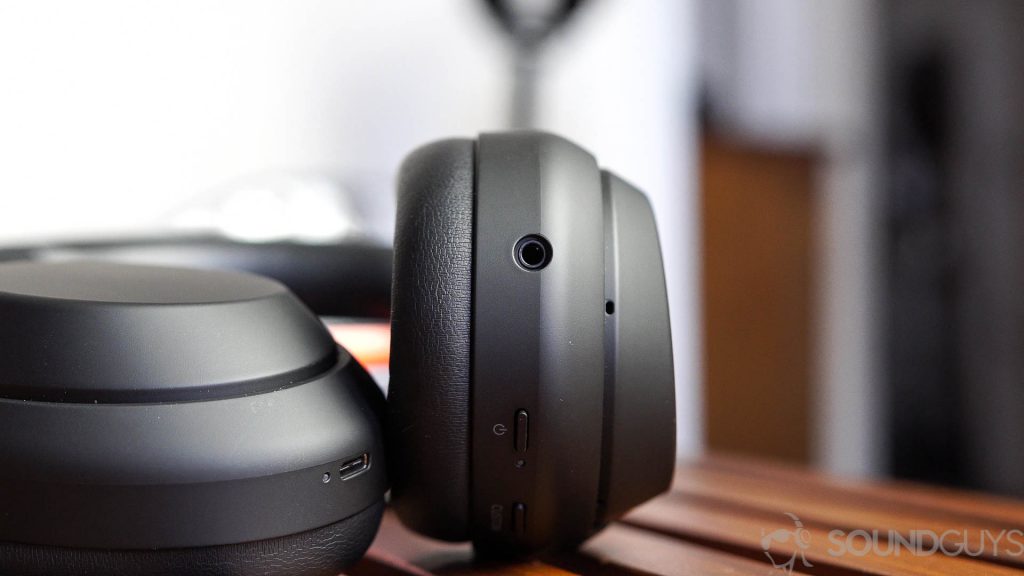 Regardless of which Bluetooth option you favor, both headphones still support 3.5mm wired connections.

One of the biggest places the Sony WH-1000XM4 and WH-1000XM3 differ is in their connectivity options. The Sony WH-1000XM4 features Bluetooth 5.0 technology, support for Bluetooth multipoint connections, and codecs like high quality codecs like AAC and Sony’s own LDAC. Multipoint only works with AAC, but it still allows the headphones to pair to two devices at once, making switching back and forth easy.

The Sony WH-1000XM3 uses Bluetooth 4.2, and supports a wider variety of codecs. On top of AAC and LDAC, the headphones also support aptX, so Android listeners will have a more consistent high-quality option. The unfortunate trade-off here is that the older headphones also lack Bluetooth multipoint.

Determining which one is better really depends on what your needs are: if you’re a heavy Apple user, the WH-1000XM4 is probably the way to go. You won’t miss aptX, and multipoint will make it easier to swap between your various devices.

It’s a little dicier if you’re an Android user—multipoint is really nice, but AAC just isn’t very good on non-Apple devices—it may be worth getting the older model if you don’t expect to swap between devices that much. After all, both devices still support pairing via NFC, which you can do by just holding your compatible device up to the left headphone. Even if you have to live without multipoint, it’s not like you’ll have any trouble pairing devices. 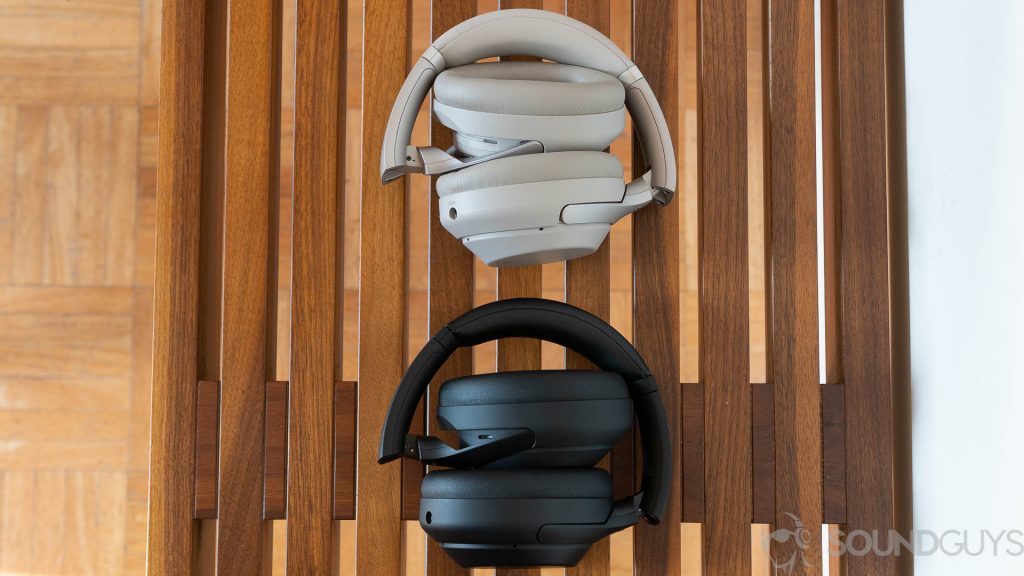 Despite the visual similarities, there are some discrepancies in battery performance.

For both products, Sony claims the battery lasts 30 hours. In our testing we found that not to be the case with either the Sony WH-1000XM4 or WH-1000XM3. The WH-1000XM4 clocked in at just a minute shy of 20 hours, which is still great for a pair of headphones. However, the Sony WH-1000XM3 manage slightly better performance, lasting 24 hours on a single charge. For both pairs of headphones, we tested at a consistent output of 75dB, with active noise cancelling turned on.

The discrepancy between the advertised number and our results may be disappointing, but remember turning ANC off, and listening at even a slightly lower volume will no doubt net you better results—not that even 20 hours is anything to sneeze at. It’s certainly better than just about any pair of true wireless earbuds will get you, especially ones with noise cancelling. Active noise cancelers do a great job killing low-frequency sound, but can sometimes stumble in other places.

With any pair of noise cancelling headphones, the true test of a products ANC function is how well it filters out low-end sound. Headphones with good passive isolation properties will always block out high-frequency sound better than headphones with tenuous ear pads, and a dubious fit. Top-notch headsets combine a good seal with good ANC for a big effect. Neither headphones are what anyone would consider slouches in this regard—the WH-1000XM3 led the market noise cancelling for years, at least until the Sony WH-1000XM4 showed up.

In charts like these, the taller the peak, the more noise is being cancelled at a given frequency. Clearly, the Sony WH-1000XM4 have considerably higher peaks, starting around 200Hz, meaning it’s especially adept at blocking out sound at the frequency and beyond. If you’re someone who rides a bus or flies on a plane often (or used to in the before time), these will do a better job blocking out the sound hum of an engine than basically everything else on the market.

The Sony WH-1000XM4 are more accurate, but the WH-1000XM3 may be more consumer friendly The increased bass response means this might be considered a little more consumer-friendly.

Both the Sony WH-1000XM4 and WH-1000XM3 sound great. They offer very accurate sound across the audible spectrum, and just about any kind of music will sound great with them. However, they don’t emphasize sound in the same way: where the WH-1000XM4 offers a more neutral output, the WH-1000XM3 boosts bass output by around 5dB. This means the sounds of instruments like drums and bass guitars, and various low-end sounds that pop up in EDM can sound almost 50% louder, depending on where they fall on the frequency spectrum.

This difference isn’t necessarily a bad thing, it just shows that the sound profiles of the Sony WH-1000XM4 and Sony WH-1000XM3 are tailored to different audiences. Increased bass output is generally considered more consumer-friendly—if you’re used to just grabbing any old headphones off the rack, this kind of frequency response probably won’t sound all that off to you. If you’re more of an audiophile, the more neutral-leaning of the WH-1000XM4 is probably preferable. Alternatively, you can set a custom EQ profile with the Sony Headphones Connect app if you want to avoid making the consideration entirely. Lower notes in deep voices won’t come across as loud as some of the higher ones, but the mic is still more than good enough for phone calls.

When the Sony WH-1000XM3 came out, we were impressed with its accuracy. It still has a lot of the characteristic fuzziness of an internal microphone, but it’s far more accurate than usual. Unfortunately, the Sony WH-1000XM4 doesn’t continue this. It still works fine, but the newer headset’s microphone array features a steep de-emphasis in the bass range, and slight bump in the highs—it’s likely an attempt to combat the proximity effect, but it means people will with very deep voices might come through quieter than higher voices.

If you’re only making the occasional phone call, both of these should do fine, but it’s disappointing to see the Sony WH-1000XM4 sport such an average microphone, when its predecessor had such a good one. Listen for yourself: One of the only physical differences between the two models is this sensor in the earcup of the WH-1000XM4, which registers whether you have the headphones on or not.

Deciding which headphones to buy between the Sony WH-1000XM4 and the Sony WH-1000XM3 really depends on your needs. The WH-1000XM4 can do just about everything its predecessor can, but the tradeoffs it makes aren’t necessarily improvements for everyone. The lack of aptX means Android users will have to rely on LDAC for high quality streaming—the codec offers the highest bitrate on the market, but its transfer rates aren’t consistent. If you’re someone who gets aggravated by little inconveniences like that (or less responsive controls), going for the older model might be the right move. The Sony WH-1000XM3 aren’t without inconveniences, though—you’ll still have to go into the connection settings every time you want to pair with a new device, and there’s no multipoint capability.

Apple users will probably gravitate more toward the Sony WH-1000XM4—its lack of aptX won’t matter, and Bluetooth multipoint is great to have. The WH-1000XM4 is also the more accurate-sounding option, though you can adjust either to your liking with Sony’s companion app.

Remember, even though we’re comparing two Sony headphones, the company isn’t the only name in town. The Shure AONIC 50 are fantastic headphones that fill all the gaps left between the Sony WH-1000XM4 and WH-1000XM3, with broad codec support, Bluetooth multipoint, and great low-frequency noise cancelling, though it is very expensive. The Sennheiser PXC 550-II also does a lot of the same stuff, for much less money, though its noise cancelling isn’t as good as more expensive options.

Really, if there’s one area of improvement that should probably sway your decision, it’s the noise cancelling. In this regard, the Sony WH-1000XM3 is no slouch—it’s not the absolute best of the best, but it’s better than almost everything (including the alternatives we mentioned above). However, the Sony WH-1000XM4 actually are the best of the best. If you commute to work, travel, or just spend a lot of time in noisy environments, you won’t find better noise cancelling than Sony’s latest.