It may not be very different than its predecessor, but that's not a bad thing.

Following up our pick for best wireless headphones, best noise cancelling headphones, and best headphones of 2017—Sony released a slightly-upgraded monster in the WH-1000XM3. Virtually identical to the model it replaces, incremental upgrades over the best isn't exactly a bad thing.

Few headphones will ever have bigger shoes to fill than the Sony WH-1000XM3, which is why they’re not too different than their predecessor. While incremental updates are usually boring, Sony simply made the best noise canceling headphones better, and far more capable of lasting the long-haul.

Editor’s note: This post was updated on December 23rd, 2019 to add information about software updates and worse ANC.

Very rarely will I say that a set of headphones is for “everyone,” but active noise cancelers that are comfortable and sound as good as the Sony WH-1000XM3 fall into that category. They perform well on commutes, flights, and just out on the town. Generally, these are headphones for everywhere but the computer… and even then they’re not bad if you’re not deep into the lossless audio game.

Despite being largely identical in many ways to the older Sony WH-1000XM2, a few upgrades have made the brand-new WH-1000XM3 a better buy for the long haul. For example, the ear pads are deeper, and the addition of USB-C charging means that you won’t have to scour and scrape for an obsolete cable to top off your cans.

While these are fairly minor upgrades, it does mean that you won’t have to worry about your headphones falling apart in a year or two. Instead, you’ll have your needs met by a modern design, with very little headaches. I’m not sure that these tweaks are completely worth upgrading for if you already own last year’s model, but if you’re buying a new set of headphones: these go a long way to setting Sony’s offerings apart from Bose, Sennheiser, and AKG. With the NFC chip, you can tap your phone to pair your ‘phones.

Probably the best thing about the headphones is that you rarely ever need to use your phone to control your music. Once you’ve got the headphone app installed, you can easily navigate playback with swipes of your finger (forward, backward swipes), adjust volume by swiping up or down, and activate your voice assistant with a long press. Initially, that assistant was limited only to the default one on your phone but the company has recently announced an update to the headphones that will give them full compatibility with Amazon Alexa as well. All you have to do is update through the Sony Headphone Connect app on your smartphone and you can choose whichever virtual assistant you want—depending on what smart products you have in your house, or simply which one answers your questions better. Additionally, you can temporarily hear the world around you by cupping your hand over the right ear cup, which makes the headphones use their external microphones to pass your surroundings on to your ears. This is great for when someone needs to tell you something, or for plane announcements.

Many users report extreme cold affecting the touch controls of the Sony WH-1000XM3, so be wary if you’re in an environment that freezes over a lot. Neither Adam nor Chris had issues with the Sony WH-1000XM3 in the frozen northeast US, but it’s possible that it varies from model to model.

If you’ve never used the Sony WH-1000XM2 from last year, noting that the WH-1000XM3 is virtually identical isn’t going to tell you what you need to know about these cans. For example, that the WH-1000XM2 were our pick for best headphones for most people for a long time, and this year’s refresh look to take that crown from their older brother. They’re extremely light, have great padding, and oh yeah: deliver on the promise of high-end active noise canceling headphones. Really, the biggest differences are the USB-C charging port, soft touch material, and new buttons.

The chassis of the WH-1000XM3 is the same hard plastic as its predecessor, though there isn’t any fake plastic leather over the ear cups anymore. Instead, it’s now a soft-touch material that your fingers can easily glide over. At the top of each ear cup are two wide microphones that collect data for the noise canceling unit to destroy outside sound. There’s a handful of buttons on the Sony WH-1000XM3, but you’ll mostly be using the swipe controls—and that USB-C charge port.

It’s unclear if Sony addressed the reported cracking issues with the previous iterations of the WH-1000X, but I didn’t run into any breakage or damage in my time with them. And I suppose that’s to be expected—I’ve absolutely abused the Mark 2 over the past year, and it still looks fairly new… minus somewhat flattened padding.

Battery life is great on the Sony WH-1000XM3, lasting 24 hours of constant 75dB playback… with maximum ANC running. This is an absolutely stellar result, and should keep you protected from the outside world for long trips.

When you’re buying active noise canceling headphones, the main reason you’re opening up your wallet is because they make the world melt away around you, right? Because of this, we test isolation and attenuation. And just like their predecessors, the WH-1000XM3 do a fantastic job of killing outside noise—drubbing the Bose QuietComfort 35 II, anyway. 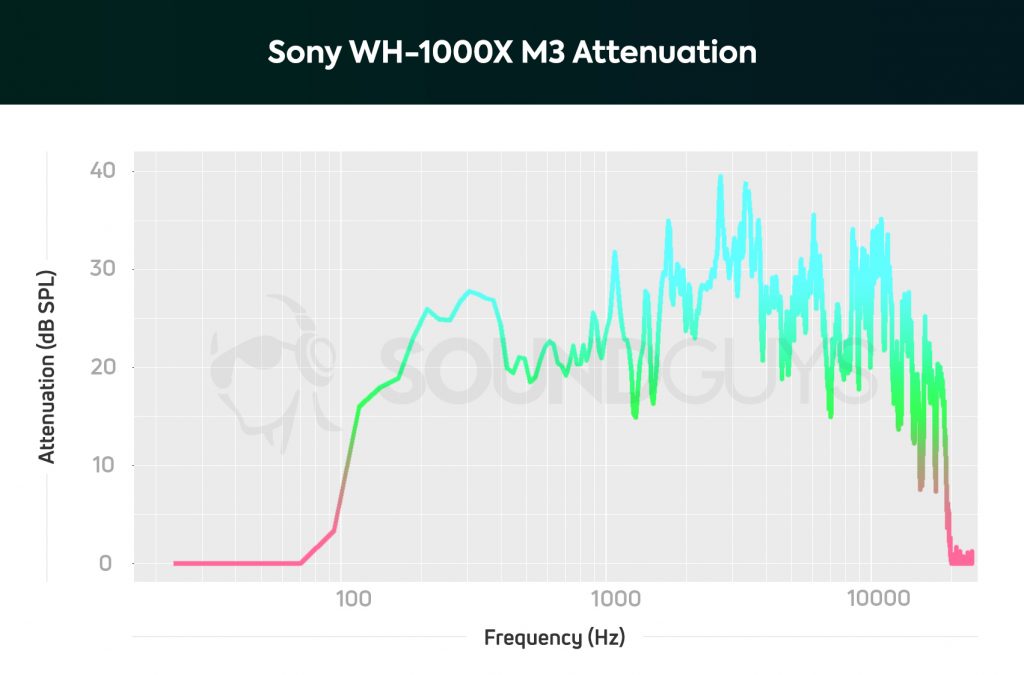 The Sony WH-1000XM3 make the world melt away around you.

While you’ll still be able to hear sounds like your officemates speaking near you, droning sounds like an HVAC system, engine noise, and other persistent notes will be muted out. That’s pretty much the best you could possibly ask for in a set of active noise canceling headphones, as the tech can only do so much. This is among the best ANC we’ve seen to date.

Can a software update make the noise canceling worse?

Essentially, many new ANC headsets require software updates for this, that, and the other. Because you have to connect to a set of headphones via Bluetooth—which has very little bandwidth—sometimes updates fail when they get marked as complete. Use the Sony app to see if there’s a mismatch in the version of software your headphones report, and what it actually has if you run into this problem. Nine times out of ten a re-install of the update will take care of it, and that’s true of Bose headphones, Sony headphones, any that require software updates over Bluetooth. 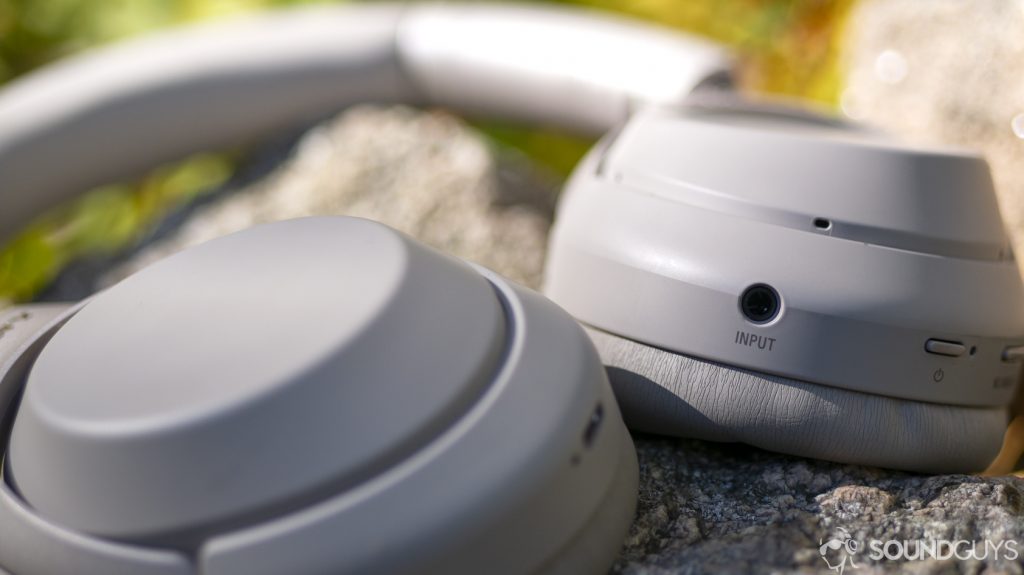 If you run out of battery, just plug in the included 3.5mm cable.

Great, really. We’ve come to a point in wireless headphones that most of the big gripes are gone, replaced by minor ones. For the Sony WH-1000XM3, the sound is quite good, bolstered by the fact that they target a very consumer-friendly sound by default. Though the chart it produces is wavy for some reason, don’t take that to mean that it’s got an issue with the overall response: it’s just that pink noise as a testing signal is inherently messy. It could also have something to do with the optimizer settings for the test head, which appear to be a work in progress. The main takeaway here is that the headphones target a consumer sound, with emphasized bass, a little bump in the mids, and a peak at about 10kHz. 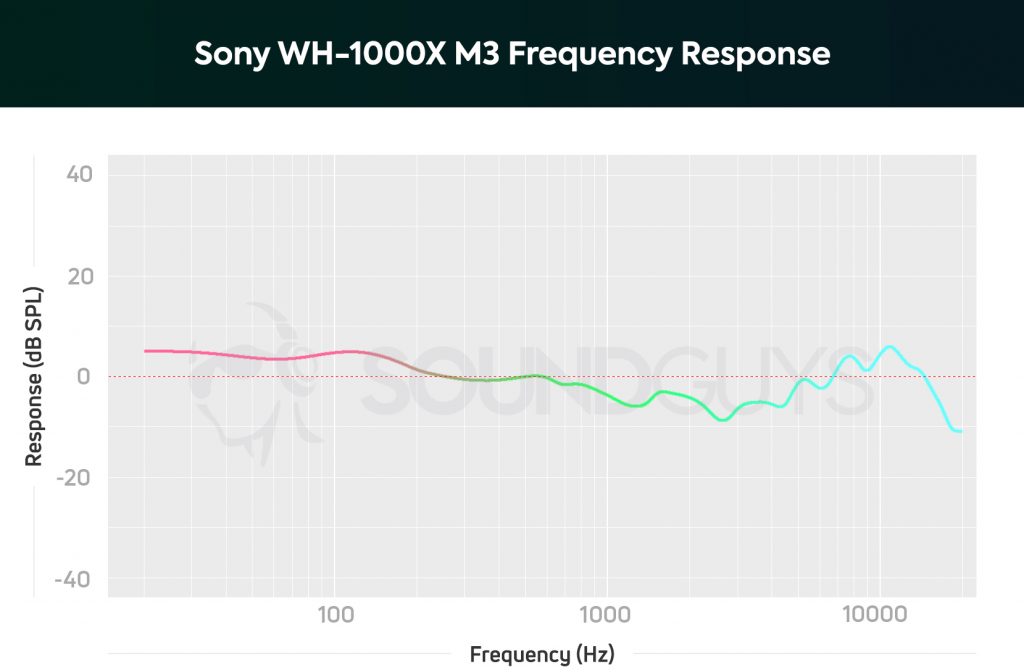 I mentioned earlier that the WH-1000XM3 isn’t for audiophiles looking for lossless listening, so I feel like I owe you an explanation. Sony’s headphones really are best in class here, but they’re not perfect. The LDAC codec is certainly impressive by many metrics, but only when you can get the 660 or 990kbps modes. Weirdly enough, the 330kbps default connection is worse than SBC in some ways, so you may find you should dive into the developer options in your phone to lock the WH-1000XM3 into 660kbps just to be sure you’re getting the best of what your headphones have to offer. The 990kbps mode may be tempting, but we find that 660 is a great middle ground that still exceeds your hearing capabilities. 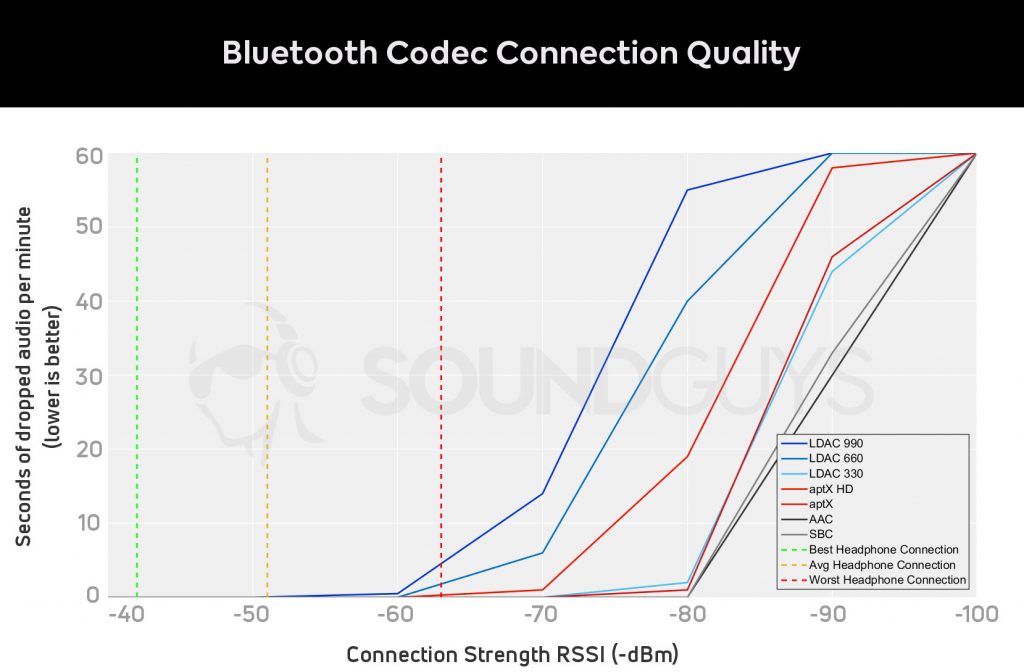 We tested LDAC with the WH-1000XM3, and we recommend using the 660kbps setting for best results.

So what does all this mean for you? Well, I can show you!

Bass is heavily emphasized in the LDAC and default SBC modes, but you can change this by using Sony’s app if you wish. However, you may elect to keep things as they are to really feel the bass in recordings that underplay it a bit. You may find that engine noise masks a bit of the bassline and bongo thumps to the one and only recognized version of September.

Mids take a bit of a backseat to the bass if you use the stock LDAC connection without swapping off to equalize your music. You may want to turn the bass down a bit if you’re jamming out to old Queen records.

Usually microphones are pretty terrible on headphones, but the Sony WH-1000XM3 is the exception to the rule. While the nature of transmitting audio still means that quiet sounds might get amplified in order to mask shortcomings of the power situation, the actual technical capabilities of the microphone are quite good. 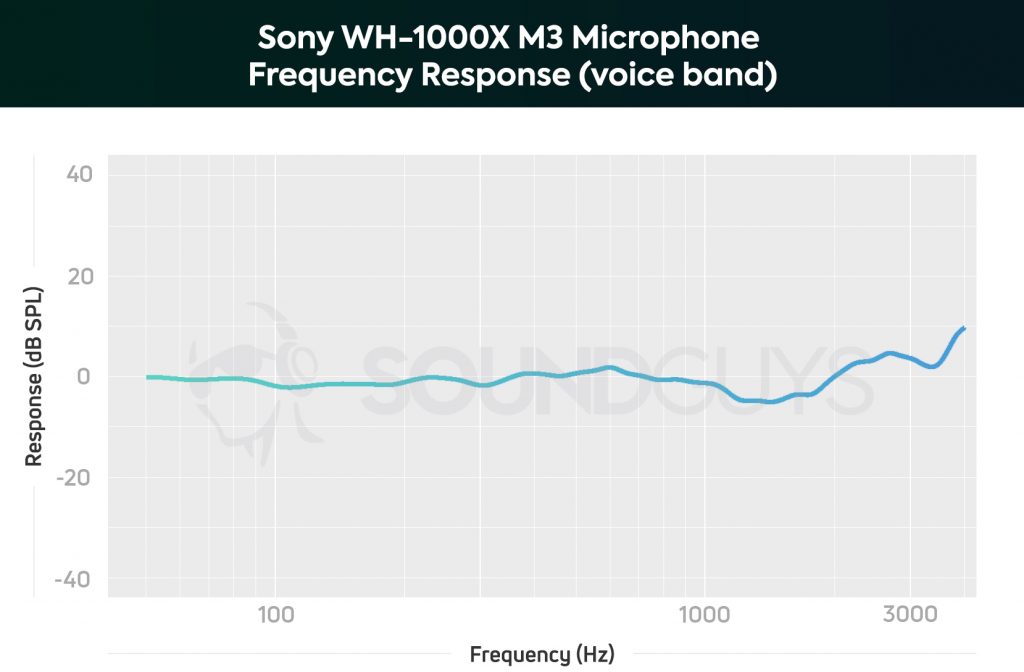 See that flat line up there? That means that throughout the range of notes that make up all the parts of a human voice, the Sony WH-1000XM3 doesn’t really treat any differently than the other. In short, your voice will sound roughly exactly how it should on your recording, or on the other end of a call. Of course, different voice clients and recording programs handle recording bitrate and dynamic compression differently, so be sure to kick the tires on a few phone calls before your return window ends to see if you like how these headphone handle it.

Maybe. While the Sony WH-1000XM3 is easily one of the best headsets out there, its little brother the Sony WH-XB900N is a credible budget pick, and gets you about 70% of the performance of these headphones for $100 less. That’s not a bad trade at all. If you’re on a budget, get the WH-XB900N and don’t look back. 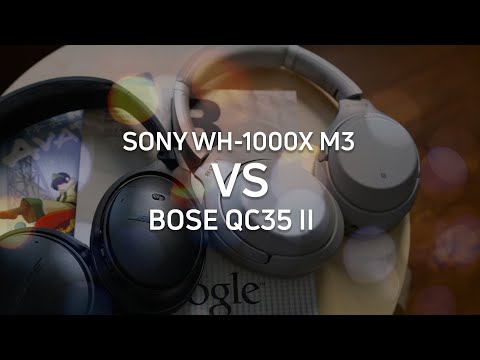 A gadget that costs $349 might sound like it’s too expensive, but it’s not. A really good set of active noise canceling headphones is worth its weight in gold, and the Sony WH-1000XM3 is among the best out there. Newer headphones offer some interesting ANC features like the Jabra Elite 85h, but none quite offer the raw ANC power the WH-1000XM3 does. Even if it’s not technically very different than its predecessor, that’s okay: all the WH-1000XM2 needed to be truly great headphones were a USB-C charging port, and deeper ear pads… which the WH-1000XM3 provide.

Active noise cancelers are the rare headphones that work well in just about any situation, and that’s why they’re so valuable. You’re not going to enjoy listening with high-end open back headphones on the subway, after all. The Sony WH-1000XM3 are the perfect travel buddies with great battery life, solid sound, and a price point under its main competitors.