The Bose QuietComfort 45 targets the Sony WH-1000XM4 in this noise cancelling headset showdown. Which headphones deserve your ears?

Sony and Bose have dueled over the top spot in the noise cancelling space for years, and while Sony has held onto the crown in recent years, the Bose QuietComfort 45 is angling to take it back. For the price, the Sony WH-1000XM4 is still one of the best pairs of noise cancelling headphones on the market.

How do the two stack up? 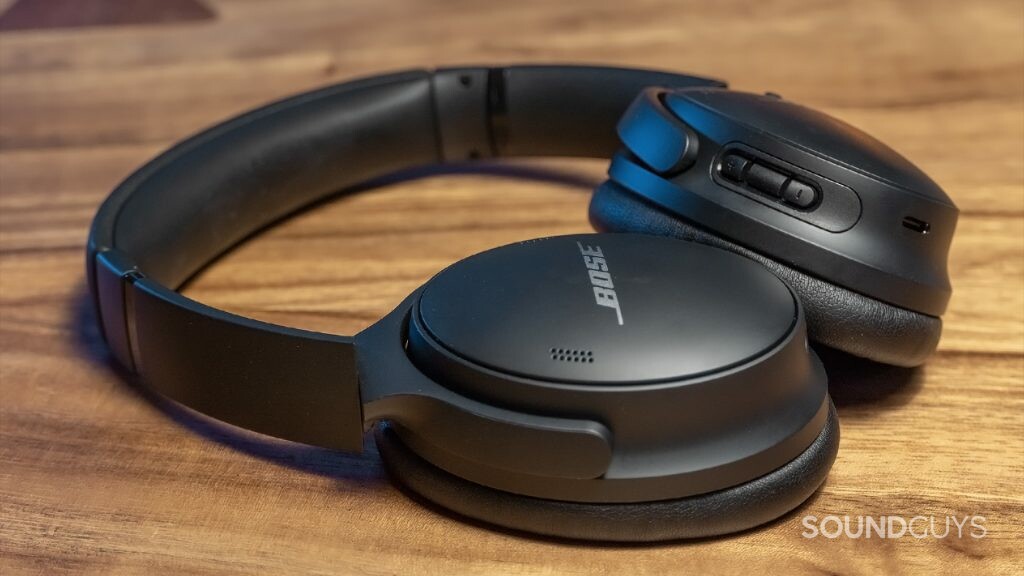 True to its name, the Bose QuietComfort 45 is a bit more comfortable than the Sony WH-1000XM4. Bose’s headset is lighter than Sony’s (240g compared to 254g), and with that lighter weight comes a slightly smaller footprint. While the Bose QuietComfort 45 and Sony WH-1000XM4 look very different from each other, they have something in common—both headsets look almost identical to their respective predecessors.

The Bose QC 45 swaps in a USB-C charging port, but looks otherwise the same as the QuietComfort 35 II. The WH-1000XM4 does even less to distinguish itself from Sony’s previous headset, with slightly thicker ear pads and a visible sensor inside the left ear cup. This isn’t necessarily a bad thing, both the WH-1000XM3 and QC 35 II are easy to use and comfortable to wear, and that’s still true for the newer headphones.

The QuietComfort 45 is built mainly of plastic, with a foldable design that makes for a compact, portable pair of headphones. The headphone hinges also rotate to let it lay flat. The QC 45 features on-ear controls in the form of physical buttons and they’re fairly intuitive. There’s an array of three buttons on the back of the right headphone—governing volume and playback control—and a button for toggling noise cancelling on the back of the left headphone. Here’s what everything does by default:

The Sony WH-1000XM4 also features a plastic build with a frame that folds up, and hinges that rotate to lay flat. Like its predecessor, its on-ear controls are a mixture of buttons and touch commands. There are buttons for power and toggling through the active noise cancellation and transparency modes on the back of the left headphone, and the side of the right headphone is touch sensitive—various taps and swipes handle playback and volume control. Here’s what everything does by default:

What Bluetooth codecs do the Sony WH-1000XM4 and Bose QuietComfort 45 support?

The headphones have hinges so you can fold them to toss in your bag and the earcups can rotate 90 degrees.

The Bose QuietComfort 45 and Sony WH-1000XM4 feature largely similar connection options, with a couple of differences. The QC 45 connects to your device of choice using Bluetooth 5.1, and supports the default SBC and AAC codecs. The WH-1000XM4 connects using the slightly older Bluetooth 5.0, but it also supports Sony’s own high-quality LDAC codec, in addition to AAC and SBC. Neither headset uses Bluetooth 5.2, so there’s no chance either will support Bluetooth’s upcoming LC3 codec.

If you’re an iPhone user, either headset should present virtually the same connection strength and audio quality, due to the AAC support. However, if you use devices outside of Apple’s ecosystem, only the Sony headphones offer a reliable high-quality audio codec—AAC can be a little inconsistent on Android devices.

Both the QC 45 and WH-1000XM4 also offer Bluetooth multipoint and each headset has a headphone jack for wired, lossless listening.

Does the Sony WH-1000XM4 or Bose QuietComfort 45 have better active noise cancelling?

Both the Bose QuietComfort 45 and Sony WH-1000XM4 offer big improvements over their predecessors in the active noise cancelling (ANC) department, but how do they compare to each other?

The Sony WH-1000XM4 features better passive isolation from 200-1000Hz than the Bose QuietComfort 45, but the Bose’s ANC outstrips it in that range—reaching nearly 40dB of attenuation, which means noises in that range will sound one-sixteenth as loud. With frequencies higher than 1000Hz, the superior isolation of the QuietComfort 45 further widens the gap.

Both headsets handle the kinds of sounds that ANC affects most very well, and very similarly. However, the reduction in high-end, incidental noise—what passive isolation affects the most—is considerably more significant with the Bose QuietComfort 45. Something to note: turning off ANC on the Bose QC 45 immediately turns on aware mode, whereas with the Sony WH-1000XM4, you can disable both modes for a standard listening experience.

To achieve a result similar to what our ANC charts indicate, you must get a proper seal with the headphones around your ear. If gaps form between the padding and your skull, then external noise will make it through the physical barrier of the headset and render both passive isolation and ANC far less effective. Both headsets have ovalesque ear pads that should accommodate most ear sizes, so getting a proper fit should be fairly simple.

Does the Bose QuietComfort 45 sound better than the Sony WH-1000XM4?

The Sony WH-1000XM4 doesn’t look too different from the originals except for a few slight tweaks.

While neither of these kinds of audio profiles are ideal, you’re probably going to have less issue with Sony’s headphones. The increased bass response isn’t so overbearing that it will cause too much auditory masking, and the increased mid-range audio means vocals should come through nicely. Conversely, the over-emphasized highs of the Bose QC 45 can sound pretty unpleasant, even if your volume isn’t that high. 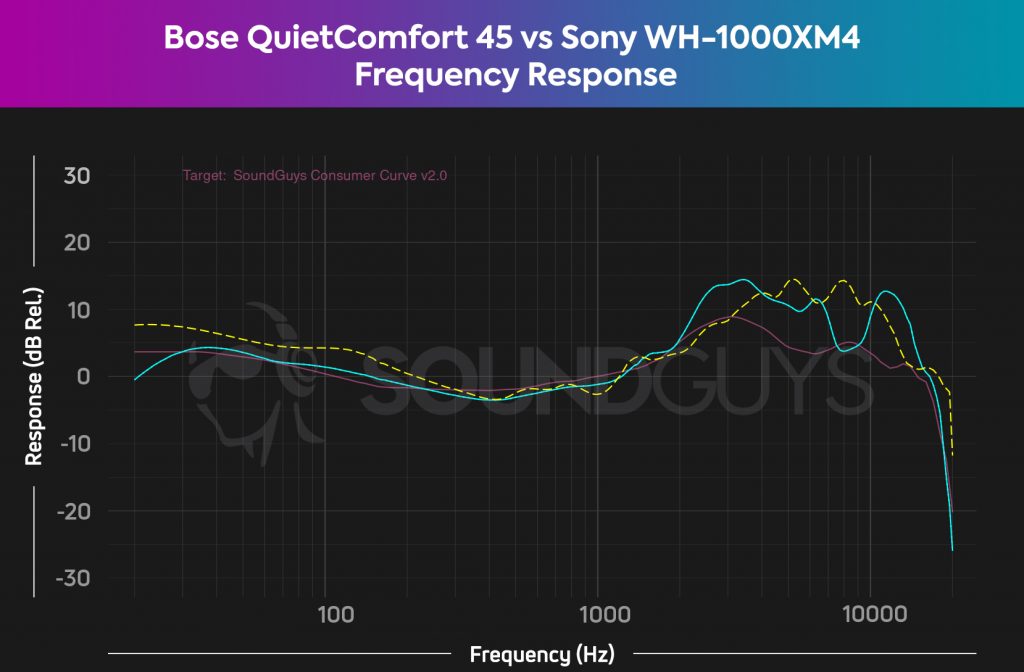 The QC 45 (cyan line) has a little drop-off in the sub-bass range, but otherwise its low end is closer to our target curve than the WH-1000XM4 (yellow dashes).

You can EQ the WH-1000XM4’s frequency response from the Headphones Connect app, something that the Bose Music app doesn’t yet offer. Sony’s multiband equalizer is very effective and allows a great deal of granularity that other headphone apps lack.

Does the Bose QuietComfort 45 have better battery life than the Sony WH-1000XM4?

Currently, it’s a little hard to compare the battery life of the Bose QC 45 and the Sony WH-1000XM4, because our battery testing for the QC 45 isn’t done. We’ll be sure to update this when testing is completed. However, according to Bose, the QC 45 can last 24 hours at 50% volume, and we didn’t run into anything egregiously different from that during the review process.

The WH-1000XM4 has a ton of Bluetooth codec options but thankfully still has a place for a standard 3.5mm audio cable as well.

On the other hand, Sony’s headphones we absolutely had time to test, and while the results are hardly bad, the WH-1000XM4 isn’t going to be winning any marathons. According to Sony, the headphones can last 30 hours of consistent playback on a single charge. However, at a consistent output of 75dB(SPL), we found the headset lasted one minute shy of 20 hours. Again, this is a very solid result, but hardly the stellar one advertised, and not likely any better than what you’ll find with the QC 45.

Both headsets charge over USB-C, and they both offer varying fast charging performance. Bose says that 15 minutes of charging with get you two and half hours of listening time with the QC 45. However, that pales in comparison to the Sony WH-1000XM4, which grants 5 hours of listening time after a mere 10 minutes of charging. Of course, you can also listen over either headset over a wired connection with the included 3.5mm cords (or 2.5mm-3.5mm cord, in Bose’s case). 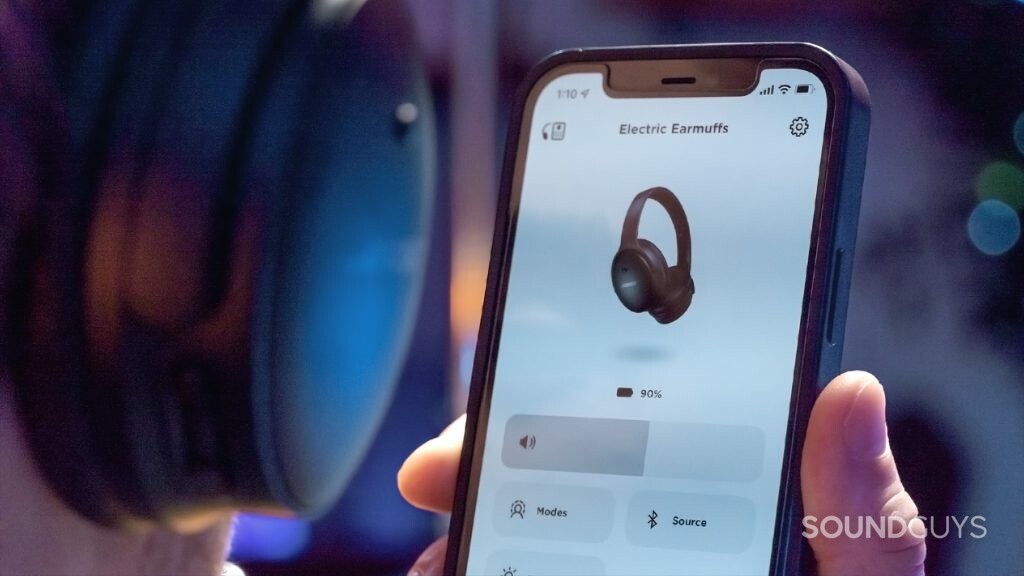 The app doesn’t offer much in the way of features, so those looking to EQ their headphones will be disappointed.

Both the Bose QuietComfort 45 and Sony WH-1000XM4 bring companion apps to unlock additional features, but the options are far from equal.

The Sony Headphones Connect app brings options for customizing one of the buttons on the headphones—you can set it to either toggle between noise cancelling modes or turn on your virtual assistant, and you can decide between Google Assistant and Amazon Alexa as the default virtual assistant. Additionally, the Sony Headphones Connect app also brings the ability to optimize noise cancelling and set up Sony’s 360 Reality Audio. This is a new standard for mastering music in surround sound, and available through Deezer, Amazon Music, and Tidal Hi-Fi. Oh yeah, and you can do more mundane things like customize the headphone EQ, prioritize connection stability over sound quality, and access firmware updates.

In comparison, the Bose Music App asks you to share a lot of information: your location, call and message history, and in return it gives you… access to firmware updates. There’s a little more to it than that, as you need to app to get virtual assistant integration set up and choose the name of your headset, but there’s no option for adjusting headphone EQ or customizing the controls. It’s basically a visual controller for your headphones (which already have on-ear controls). This could eventually change—Bose has made a habit of putting out pretty significant features in updates after launch—but right now it’s pretty lackluster.

Does the Sony WH-1000XM4 or Bose QuietComfort 45 have a better microphone?

This is an embedded microphone, so the quality is limited.

Neither the QC 45 nor the WH-1000XM4 have what you’d call a high-end microphone. They’re both loud, and clear enough to handle whatever your phone call needs are, but don’t expect anything approaching studio quality. Neither one really sounds better than the other, so you won’t need to worry about making this sort of trade-off at least.

Sony WH-1000XM4 vs Bose QuietComfort 45: Which headset should you buy?

The WH-1000XM4 has a ton of Bluetooth codec options, but thankfully still have a place for a standard 3.5mm audio cable as well.The Bose QuietComfort 45 may be the newer option by far, but that doesn’t necessarily make it a slam dunk. Sure, it’s cheaper by about $20 USD, but in saving that money, you lose out on an app that actually brings value, vastly superior quick charging, and a more pleasant default sound profile (which you can EQ).

The ANC performance of the WH-1000XM4 may have lost a bit of its luster in the last little while, but it’s still among the best noise cancelling headphones on the market, and keeps pace competitively with the QC 45. The real standout improvement of the QC 45 is its noise cancelling, but given all the other things, it’s just not a big enough difference to make this an easy decision.

Sony WH-1000XM4
All prices listed in USD unless otherwise specified. Prices may change over time, and vary by region. Unfortunately, we cannot list Amazon prices on the site, as they vary greatly by currency.

All the same, both headsets are very good, and you likely won’t be disappointed with either. If your budget is a little restricted, the Bose QuietComfort 45 will still get you from A to B, and Bose often adds new software features down the line, so you may see EQ customization and more eventually. If you’re an Android user and still vacillating between the two, remember that only the Sony headphones include a high-quality audio codec for you. Since neither headset uses Bluetooth 5.2, LC3 isn’t coming—what you get is what you get.

Bose QuietComfort 45
All prices listed in USD unless otherwise specified. Prices may change over time, and vary by region. Unfortunately, we cannot list Amazon prices on the site, as they vary greatly by currency.