What is the proximity effect, and why does it occur?

It isn't all bad, and can actually be a useful tool.

Proximity effect is a bit of technical jargon you’ll often hear applied in reference to people speaking into microphones. You can hear its audible effect all over podcasts, YouTube, and other streaming platforms. It’s easy to demonstrate, but understanding exactly why it happens requires at least a cursory understanding of some basic physics.

For a definition, the proximity effect is an increase in the proportion of low-frequency output that occurs as the distance between a directional microphone and the sound source is reduced to the point where they are very close, or almost touching. In other words: the closer the microphone gets to the sound source, the greater the bass boost!

If this is as far as you’re going to read, take these points away with you: 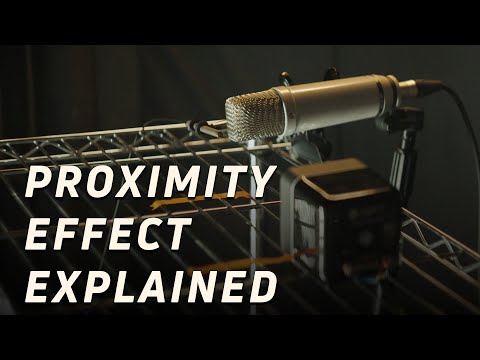 What causes the proximity effect?

Rob Sarmiento Cardioid microphones are susceptible to the proximity effect whether they’re being used on vocals or instruments.

We know that bass frequencies increase as the microphone gets closer to the sound source. The proximity effect occurs due to phase and amplitude variations of the sound waves arriving at the two sides of the microphone’s diaphragm. These variations are explained by the different ways sound radiates through the air, depending on the frequency and distance from the source.

Let’s explore the mechanics of what makes this acoustic phenomenon occur, so we can better understand when to use it as a tool and when to take preemptive measures to avoid it.

First up, we need to understand a bit about how a directional microphone, such as the Audio-Technica AT2020 (or mostly anything without an omnidirectional pickup pattern) actually works. A directional microphone (aka a pressure gradient microphone) produces an electrical output signal as it responds to the difference in pressure between the front and the rear of its diaphragm.

Directional microphones work by allowing external sound pressure to the front and back of the diaphragm.

The diaphragm is housed in the mic capsule—directional microphones have both front and rear sound entry ports, allowing sound to access both sides of their diaphragm. There needs to be a difference in pressure between the front and back for it to move and generate an electrical signal.

Start here: What type of microphone do you need?

When a sound wave arrives on the microphone’s axis, it has to travel further to get to the rear of the diaphragm, via the rear entry port. This is illustrated in the diagram above. That means the wave’s arrival at the rear of the diaphragm is slightly delayed compared to the front, and therefore exhibits a difference in phase from the wave hitting the front side. But to understand proximity effect, we need to consider both phase and amplitude changes from one side of the diaphragm to the other.

What is the inverse square law? Does it always apply?

The inverse square law describes how sound decreases in intensity when radiating into a sphere—in theory.

The inverse square law is the theory behind why sound gets quieter the further you are from its source. If a sound source is much smaller than the wavelength of sound it produces, it can be considered as a “point source.” This means it will radiate sound symmetrically and equally in all directions. As sound disperses from a point source, the energy produced expands over a larger and larger spherical area.

Since the total energy is conserved as the sphere gets larger, each point on the sphere contains less energy. As the distance from the source is doubled, sound intensity is reduced by 1/r2 —the inverse square—and if we translate that to the logarithmic decibel scale, it works out as a reduction in sound intensity of 6dB for each doubling of distance.

In practice, there is a lot less than 6dB of reduction per doubling of distance from source to microphone. This is partly because we’re either indoors, or close to physical boundaries (the ground, walls), but also because sound sources usually don’t behave like ideal point sources. This is especially true at higher frequencies, where the source is usually physically larger than the wavelength. In practice, sound behaves more like a plane (aka planar) wave, where successive wavefronts are practically parallel with each other. In this case, there’s much less energy dissipation with distance, and the inverse square law doesn’t apply.

Plane waves move with their wavefronts effectively in parallel.

When the sound source is at a distance (in the far-field), sounds of all frequencies arrive basically as plane waves like in the illustration above. The amplitude difference of the sound at the front and rear of our microphone diaphragm is relatively small for all frequencies. But the path difference causes a phase shift, which yields enough of a net pressure difference to generate an output.

When the sound source is close (near-field), the high frequencies will still arrive basically as plane waves, and the microphone’s response to those high frequencies is just like it was for the far-field. But for low frequencies, not so much…

At low frequencies, up close to the sound source—technically “very near-field”—we are actually dealing with a point source, since sources tend to be much smaller than the wavelength of low-frequency soundwaves. For example, the wavelength at 250Hz is close to 1.37 meters (4.5ft) long. Any frequency with a large wavelength compared to the size of the source will exhibit a high degree of wave-front curvature, and the sound energy will exhibit a drop-off much closer to the inverse square law.

This means for those low frequencies where the amplitude drops more rapidly with distance, the air pressure sensed at the front and rear ports of the microphone capsule will be significantly different. Since it is the difference in pressure that causes the mic’s diaphragm to move, the low-frequency sensitivity of the mic for very close sources is greatly exaggerated compared to high frequencies—we hear this as emphasized bass in the mic’s output, and call it the proximity effect.

When far-field and near-field situations are considered separately, it’s easier to understand how proximity effect occurs.

The proximity effect is therefore caused by the increased amplitude difference (compared to the phase difference) of low frequencies at a close distance.

Soundtrap The Shure SM7b is sensitive to the proximity effect, and is very popular with podcasters and vocalists.

Vocalists tend to like the proximity effect because it can make their voices sound “bigger,” more intimate, or more impressive as they get in close to the microphone. This technique is sometimes called “eating the mic” in recording lingo. By varying the distance between themselves and the microphone, and their position relative to the mic’s axis, singers and voice artists have an additional tool to manipulate the sound of their voice as part of the performance.

By understanding and using the way the mic’s frequency response changes with distance and angle, the proximity effect can work as an extension of the voice as an instrument. This is part of a larger subject called microphone technique, and is something that separates professional vocalists from amateurs. You can improve and develop your technique by spending time around your mic of choice while using studio headphones to monitor the output. Don’t try it with loudspeakers though, unless you enjoy the sound of screaming feedback.

The proximity effect can be a useful tool, as an effective tone control or equalizer.

For other acoustic sources you might want to record or amplify in a live setting, such as drums, speaker cabinets, or other stationary instruments, you won’t need to worry about the sound source and the mic moving around relative to each other. But the proximity effect can be a useful tool as an effective tone control, or equalizer, for the sound being captured. It can emphasize the thud of a kick drum or the “depth”—meaning an accentuation of the fundamental tones—of an amplified bass guitar. This is something you need to consider when setting up and positioning microphones, and an area where you may need to experiment a bit to achieve results you like.

When is proximity effect bad?

Jason Rosewell There are some negative sides to the proximity effect to be aware of.

There are challenges with a constantly varying low-frequency boost, which can sabotage your carefully dialed mic input levels. If you, or the voice talent, habitually dance or sway while performing, you may find it difficult to get a consistent sounding vocal. Consistent vocal input is of major importance if you anticipate editing multiple takes together later on. Proximity effect can also negatively impact speech intelligibility, or make the low-end of a mix dense and cluttered if it affects multiple tracks or instruments.

When you move in close to get the benefits of the proximity effect, consider that the overall sound pressure level the mic receives increases dramatically—and input overload or mic diaphragm breakup can cause distortion. Proximity can also make plosives (also known as “P-pops”) more of an issue. These are all solvable problems. Be sure to choose a mic that is appropriate for how loud your vocal will be. You’ll also need to set the input gain carefully to allow for the expected range in delivery levels, and use a pop-shield (which you should be doing anyway).

Can I control the proximity effect?

Gabriel Barletta An understanding of the proximity effect can be a useful tool in many recording and live performance situations.

You can vary the amount of proximity effect by changing the angle of the mic relative to the sound source. Rotating a directional mic like a cardioid so it’s positioned at 90° to the sound source means its front and rear sound-entry ports receive the same energy, regardless of signal frequency and wave-front curvature. This nullifies the proximity effect. Partially rotating a directional mic away from the source will reduce the proximity effect. This will also affect the overall sensitivity and tonal balance, but with a typical cardioid mic, this will be relatively minor over a range of up to 45°.

If you’ve made it this far: well done! Hopefully, this knowledge serves you well. Have fun with it!