The best headphones for studio use.

By Sennheiser
Check Price
If you're looking for a set of "end game" studio cans, the Sennheiser HD 820 is king... only if you're able to shell out a few thousand dollars though.
Best bang-for-your-buck
8.3

By Sony
Check Price
If you don't want to spend too much, the Sony MDR-7506 has been an industry mainstay for almost 40 years.
View Full Review
Best for Mixing
9.2

By Beyerdynamic
Check Price
For less than $300, this is one of the best pairs of open-back studio cans you can get; plus, they're supremely comfortable.
View Full Review
Best Style
9.3

By Audio-Technica
Check Price
The Audio-Technica ATH-M50X is a reliable set of headphones that's seen on the streets and in studios.
View Full Review
Best portable
9.0

By AKG
Check Price
No matter what genre of music you prefer, the K371 is going to make it sound good. Who says you have to sacrifice style for sound quality?
View Full Review

People love music, not headphones. Headphones are just tools that let us listen to music. Whether you’re a professional sound engineer or a musician, you’re going to want to be able to hear your music the way it was intended to be heard. Studio headphones can help you with that.

Editor’s note: this list of the best studio headphones was updated on March 10, 2021, to address an FAQ about the Sony WH-1000XM4.

The best studio headphones are the Sennheiser HD 820

Sennheiser is one of the most trusted brands in audio and although there are plenty of debates over which of their headphones sound better, the HD 820 dominates the hi-fi conversation. The large, closed-back design is a departure from the beloved HD 800, but the Sennheiser HD 820 retains the same unique aesthetic Sennheiser fans have grown familiar with. Although listeners may be concerned by the transition from open-back to closed-back between the high-end models, Sennheiser claims that this design is able to achieve the same open soundstage that we’ve come to expect. What’s more, it’s also able to insulate listeners from external noise better as a result of the closed build. 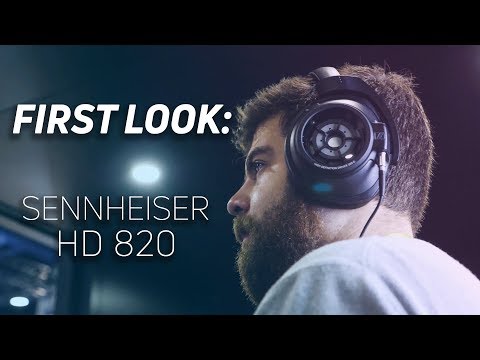 For better or worse, these 300-ohm audiophile headphones require the use of a DAC and amplifier, which will set you back quite a bit more. We understand that many people are simply in search of reliable studio headphones and aren’t looking to consider a payday loan to cover their next set of cans. Regardless, we felt it appropriate to tip our hats to the Sennheiser HD 820 and feature more financially viable options below.

What you should know about studio headphones

Studio headphones aren’t for everyone, because perhaps you want a bass-heavy sound, for example. However, there’s still a lot to like about a pair of headphones that won’t color your music too much when you’re listening.

One of the most popular pairs of headphones right now is the Studio3 Wireless from Beats by Dre, and even though they have the word “studio” in the name they’re not what you’d want to be using if you plan on working with audio. While we could go on about all of the reasons why you should want some studio headphones, we’ll keep it simple with a few quick points. The Sony MDR-7506 headphones aren’t insanely comfortable but they get the job done.

Save money and go with the Sony MDR-7506

Ever since the mid-1980s, producers and artists alike have been relying on the Sony MDR-V6 and its many variants. Boasting a flat note emphasis and very convenient design, the Sony MDR-7506 has been in use all over the audio industry. If you want the gear the pros use, this is the starting point. Of course, older headphones like this have some drawbacks. Namely, those pads don’t tend to last a long time, so you may find yourself looking for replacements. Not to worry though, Amazon has a ton of those, and they’re fairly cheap to buy. Other headphones like the Audio-Technica ATH-M50 and its series also use the exact same size of headphone pads because, as you might be able to guess, there’s such a big demand for these pads that it’s an easy way to reduce costs by avoiding making small numbers of supplemental pads.

Mix it up with the Beyerdynamic DT 880 Pro

Beyerdynamic is one of those companies that people trust just because of their reputation. They’re known for great quality headphones, and the Beyerdynamic DT 880 Pro, like its junior, is no exception. Besides being super comfortable thanks to padded velour earcups to keep your ears happy, they also have a relatively flat sound with the exception of a slight peak in the 7kHz-11kHz range. If you’re going to be mixing tracks and don’t want the headphones you’re wearing to color your mix at all these are a good pair of mid-tier headphones to look into. Of course, if you decide to use these with mobile devices you’re going to need an amp to power the 250Ω behemoths, but it might not work out for you as these are also semi-open back so sound leakage is going to be an issue. But if you plan on keeping your headphones deskside, these won’t disappoint.

Audio-Technica’s ATH-M50X is a classic

The ATH-M50x has a reputation for being a pair of studio headphones, but they’re not as flat sounding as many people seem to think. Sure they’re “flatter” than most headphones out there and they’ll get the job done in the studio if you need them to but they also have just enough in the lows to make for a great pair of everyday headphones as well. That versatility is what put them on this list. While the ATH-M40x have a slightly flatter sound that’s technically better for the studio, the ATH-M50x headphones are just a little more versatile and we think more people will be happy with them. Because of the bump in the low end of the ATH-M50x headphones, these might be better for the musician that might need to feel that extra bit of emotion from the instrumentation while in the recording booth and then still wants to listen to some music on the way home. These are a versatile pair of cans that will satisfy both roles well. The ear cups sit flat on your ears and provide a decent amount of noise isolation, not to mention that they also swivel up to 90-degrees which gives you the versatility you need while wearing them out and about.

The Audio-Technica ATH-M50xBT’s reflective logo is an eye-catcher.

If you decide you like the sound of the ATH-M50x, you might be interested to know that they now have a wireless variant called the Audio-Technica ATH-M50xBT. This variant can also be used with a 3.5mm to 3.5mm cable if need be, but it’s good to know that there’s a step-up model out there if you want your studio headphones to also be what you use on your commute.

Take your mixing anywhere with the AKG K371

The AKG K371 reference headphones are a great pick for anyone whose job requires frequent travel. Despite the over-ear design, these headphones are slim and portable: the ear cups flip up and into the headband similar to Audio-Technica’s design. What’s more, the K371 is good for DJs as you can rotate either ear cup upward to get a better read on the crowd or get them more pumped up. The natural-leaning frequency response is a necessity for creating an accurate product. The midrange frequency response nearly meets the platonic ideal, making this a pristine pair of headphones for vocal-heavy recordings. What’s more, AKG supplies you with three cables, two straight and one coiled, so no matter your environment, you’ll have something that works with you.

Despite the plastic build, the headphones are durable and withstood multiple trips at the bottom of Lily’s backpack during her full review. That’s not to say you can get away with dropping an unabridged encyclopedia onto them headset, but the build can withstand some roughhousing. What’s more, these headphones are great for listeners with glasses because the slow-retention memory foam wraps around the arm bands. Pressure is also minimal around the ears and atop the head. This tends to have its downsides, too, though as users have reported the headset coming off with vigorous shaking. Listeners prefer open-back headphones for their more natural audio reproduction, a benefit of the open design.

If you want good quality headphones and have money to spend but you don’t want studio headphones, try the Sony WH-1000XM4. These headphones are wireless and have excellent sound quality along with active noise cancelling and a slew of other features that further improve their value.

The Sony WH-1000XM4 are the best active noise cancelling headphones on the market, all things considered. What’s more, if you’re not fond of their preset sound signature, you can EQ it in the Sony Headphones Connect app. They support SBC, AAC, and LDAC Bluetooth codecs, but can also be switched to wired listening if you prefer.

Working at SoundGuys allows each of us to have plenty of hands-on time with the latest and greatest audio products. While we do spend ample time testing out great products, we also receive some ones that need work. Regardless of how one pair of headphones stack up against another, it gives us a different reference point for understanding what’s good and what’s not when it comes to consumer products. Testing headphones means putting them to work in realistic situations.

Ultimately, we want to make the research process easier for you, so you can spend more time enjoying your headphones. And while you can read all about our ethics policy, we’re transparent in that none of our writers may benefit from championing one set of cans over another.

Again, our picks tend toward the midrange and lower as far as pricing goes, but there are many other headphones out there that will cost you a whole lot more than what we’ve got here.

How well would the Sony WH-1000XM4 work as studio headphones in wired mode?

The Sony WH-1000XM4 have a relatively neutral frequency response, and they do let you equalize the sound signature in their app. Their passive isolation is also pretty decent, which means you won't risk sound leaking out of them when you're in the studio. A neutral frequency response and good isolation are two of the key reasons why someone might want to buy a pair of studio headphones, so the Sony cans will make a pretty good substitute.

Should I get studio headphones or studio monitors?

Ideally, you will have both studio headphones and studio monitors at some point. Studio headphones are necessary for recording and tracking, but studio monitors are much better for mixing. They create a more accurate soundstage than headphones can, and don't fall victim to crossfeed, which is a phenomenon that occurs when sounds from one headphone bleed into the other, creating a narrower perceived stereo image than what is accurate.

Where should I buy my headphones?

More corporations than just Amazon have quick and cheap shipping now, and plenty of small businesses sell your favorite products too. Where you choose to buy your headphones could depend on a lot of things including your shopping ethics, how much customer support you want, and the warranty of the company. Check out our guide to get a run down of some options and their stats.