The answer is almost assuredly: "no." However, it's useful to know when you'd need an amp in the first place—we're here to clear things up.

Betteridge’s law of headlines aside, if you’re just dipping your toes into the world of high-end audio, you’ve probably asked yourself this question before. Getting a straight answer is tough: some people will tell you that an amp will always help, and that maybe you need what’s called a DAC (digital to analog converter) as well.

Well enough of the confusion, Papa Chris is here to clear things up. If you’re wondering if you need an amplifier for your headphones, the answer is almost assuredly: “no.” However, it’s useful to know when you’d need an amp in the first place so you don’t have to flood my inbox or rely on the advice of someone you’ve never met on the internet. Myself excluded, of course.

You only need an amplifier when the maximum output of your source—a smartphone, laptop, or something else—is lower than what your headphones require to reach that level. Bluetooth headphones will never need an amplifier, as the headphones themselves handles the power sent to the speaker elements internally.

If you’re using wired headphones, go plug them into whatever you’re going to be listening to them with. Can you get the volume up to a good level? Is there room to spare?

If you answered “yes”: Congratulations! You don’t need an amplifier. An amplifier’s job is to increase the output of your source to the level you want, and if whatever you’re using to listen to music can do that on its own: a lack of power isn’t one of your issues. You can stop reading here and go enjoy your audio adventures! If your audio sounds bad, it’s due to something else.

If you answered “no”: Buckle in kiddo, we’ve got some math to go over.

When you crank your volume on your smartphone but can’t get an acceptable listening level, there’s a few things that could be happening.

The first item on that list can’t be solved, but thankfully it’s the least likely scenario. The solution to the third problem is an amplifier.

I need you to go to the specs page of whatever headphones you’ve got (or are planning to buy) and take down a couple numbers for me. Got a pen and paper? Write down the impedance and the sensitivity of your cans. Impedance is the ability of your headphones to resist current, and the sensitivity refers to how loud they’ll get with one milliwatt of power. If your eyes just glazed over, don’t worry: it’s not just you, this can be boring. All we’re doing here is just trying to figure out if whatever you’re using to play music on can get whatever power the headphones you need to reach your normal listening volume. 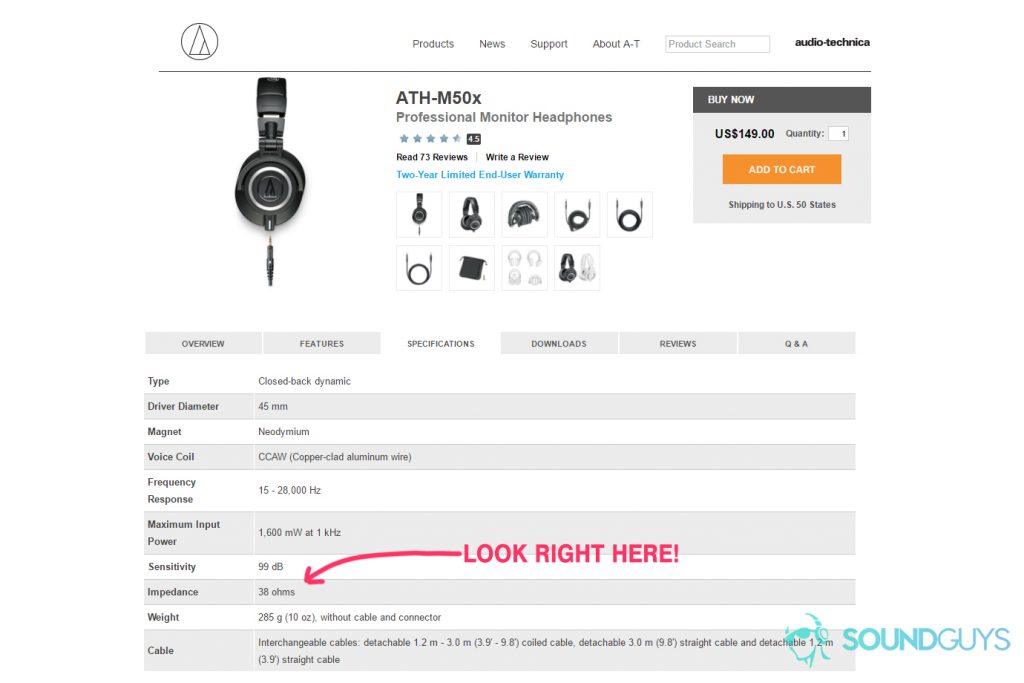 Specs pages can be boring, but they are useful if you’re wondering if you need an amplifier.

These numbers will be able to definitively tell you whether or not you need an amp with your source, but it takes a little bit of math. If you’re unlike me (and you have a life), you could use this tool and be done with it… but wouldn’t you like to at least understand what’s going on?

So in order to get enough juice to your headphones, your source needs to be able to handle the job. There are several factors working against you, including the headphones’ innate tendency to resist electricity, their power requirements, and so on.

Electric circuits are a lot like a water system. When you think of “current,” think of the rate water’s flowing through the pipes. When you see “voltage,” think “water pressure,” and when you read “impedance,” think about how narrow the pipes are (which constricts the flow of water a certain amount). It’s not a perfect analogy, but it works for what we’re talking about. When you want to pump a certain amount of water out of a reservoir, you’ll need to know the previously mentioned things to determine what it’ll take to get it. 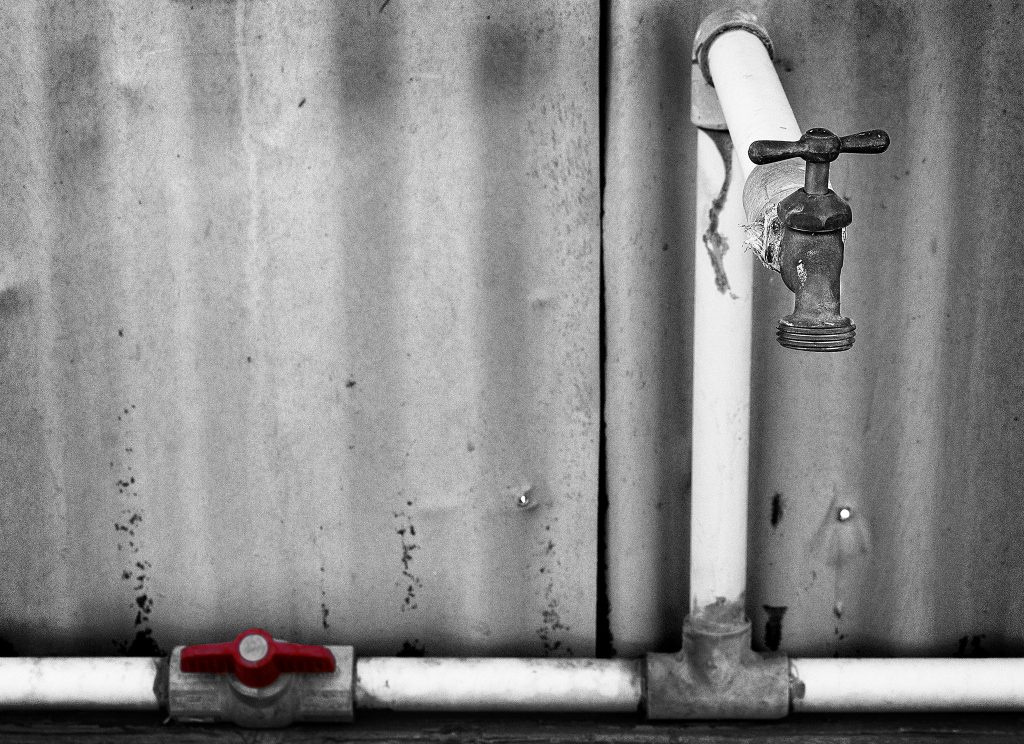 Flickr user rheinitz Despite the metaphor, please resist the temptation to plug your headphones into a spigot.

For headphones, you need to have at least that amount of “water” at all times in order to work properly. While you might be okay waiting for a minute or two while you fill up a bucket at a hand pump, your headphones can’t wait for the right amount of power to build up.

That’s where an amplifier comes in. Using its own power (or reservoir, if we’re going to continue this analogy), it can boost the signal from a source to satisfy the headphones’ requirements.

Editor’s note: This is gonna get really dry and textbooky so if you just want some common examples, skip to the last two paragraphs of this section
Do you know what a decibel (dB) is? It’s okay if you don’t, we’re only talking broad strokes here. It’s a measure of how powerful a sound (or signal) is. The dB scale is logarithmic, so every time you increase the dB by 10, you’re increasing the total power 10 times over. A 100dB signal is ten times more powerful than a 90dB one, and 100 times as powerful as an 80dB signal. While the perception of loudness can’t be measured objectively, we do know that humans perceive a change in 10dB to be a change of roughly 2x in loudness. 70dB is twice as loud as 60dB, four times as loud as 50dB… you get the idea. If you’re wondering what level you should be targeting when you make your calculations, I usually say 85dB simply because it’s loud, but not so loud as to give you noise-induced hearing loss that quickly. 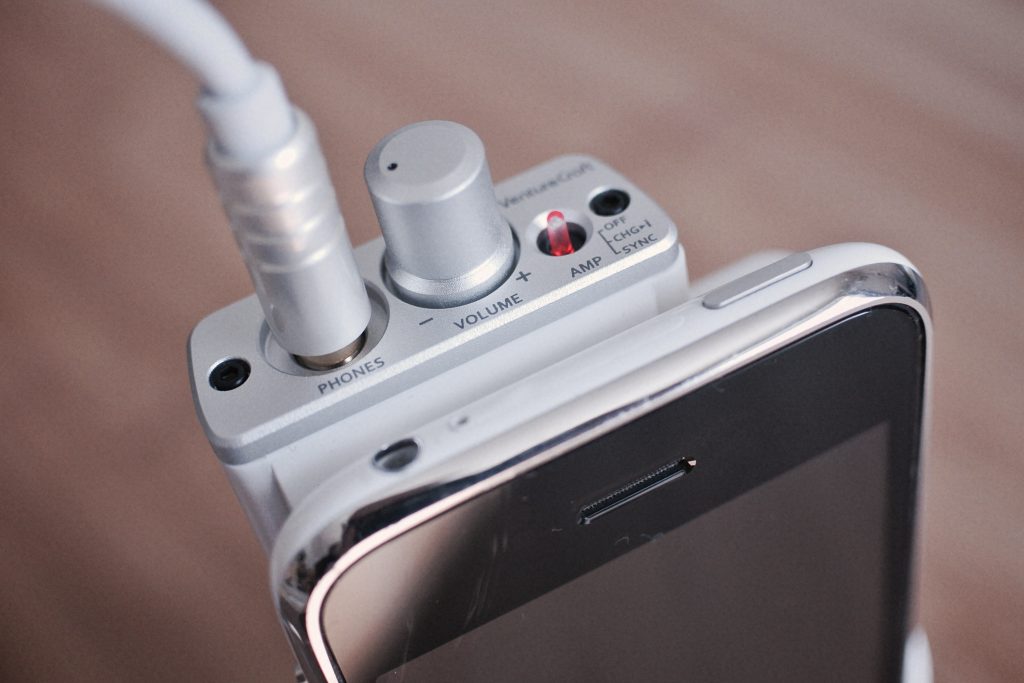 Flickr user mujitra Portable amps are still clunky, so buying headphones that work well without one is a smart purchase.

So remember when I told you to write down that sensitivity number? That’s how loud the headphones will get when there’s one milliwatt of current applied to it; usually this is pretty loud—a level you shouldn’t be listening at anyway—but it’s how we determine the baseline for figuring out how much more power needs to be applied to raise or lower the volume. By using Ohm’s law and applying what we know about decibels, we can figure out the current needed to get a certain volume level.

Essentially, the math works like this: for every 10dB you want to increase the volume, you need to apply ten times the power. For every 10 dB you want to decrease the volume, you need to reduce it to 1/10th the power. Easy enough, but what about the voltage? Basically, it’s as easy as plugging your numbers into this equation: Voltage(Vrms)=√[Power in Watts*Impedance]. Just remember, because we’re dealing with milliWatts, be sure to divide any number in front of mW by 1000 first. 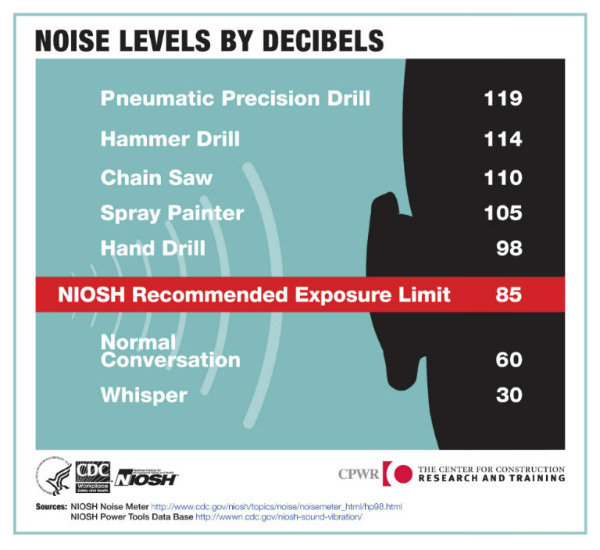 Centers for Disease Control The CDC and Chris Thomas agree, keep your tunes lower than 85dB.

Let’s look at two different theoretical examples. Headphone A has an impedance of 300Ω and a sensitivity of 85dB/mW. While it only needs 1mW at 0.55Vrms to reach a comfortable listening volume of 85dB, in order to increase the level on your hifi setup you’d need to pump 10mW at 1.73Vrms to reach 95dB. That’s a lot of juice, and not something your smartphone can really do. Given that a smartphone can’t output that kind of power, you’re going to want to use an amp with headphone A.

Alternatively, Headphone B was designed for smartphones, and has an impedance of 32Ω and a sensitivity of 105dB/mW. This set will only need 0.01mW at 0.02Vrms to reach 85dB, and will be much easier to run off of just about any source because it is so efficient. You will set your headphones on fire and deafen everyone around you long before you’d reach power levels that would require an amplifier with Headphone B.

If it wasn’t obvious before, very few headphones out there require a lot of juice to work properly. It’s really only when you start getting into the world of audiophile-grade cans that you start to see cans that need a dedicated amplifier to work the way their designers intended, and that’s because most headphones—even the newer high-end ones—are being designed for use with things like iPods, smartphones, and laptops; low-power devices.

Read next: Best headphone amps of 2019

Still have questions? Sound off in the comments below, hit up Chris on Twitter, or SoundGuys on Twitter to learn more. Who knows? Maybe your question becomes a video!