Apple decides to play nice with Android (sort of).

For less than the price of the AirPods, the Beats Studio Buds delivers a good fit, great sound, and active noise cancellation. This is also the first set of Apple-owned Beats earbuds to feature quick pairing with Android devices, albeit at the expense of some key features for Apple users.

Since Apple purchased Beats in 2014, each iteration of Beats headphones and earbuds has become more tied into the Apple ecosystem. That all changes with the Beats Studio Buds, which ditches the Apple H1 and W1 chips for a more universal experience across both Apple and Android devices.

Without the tight integration in the Apple ecosystem, does the Beats Studio Buds do enough to stand out from a crowded market of true wireless earbuds?

Editor’s note: this Beats Studio Buds review was updated on November 19, 2021, to add information about the Beats Fit Pro.

Who should buy the Beats Studio Buds?

What is it like to use the Beats Studio Buds?

Beats includes three sizes of ear tips, a USB-C charging cable, the case, and the earbuds.

As the packaging on the Beats Studio Buds states, great sound starts with a proper fit. Beats supplies you with three sizes of silicone ear tips, so most people should be able to attain a tight seal. Since the earbuds are a featherweight 5g and barely stick out of the ear, they stay comfortably in place without the worry of falling out even during intense workouts.

A clickable button on either earbud controls music playback. It’s a lot more reliable than the touch controls found on other true wireless earbuds, although there isn’t any way to control the volume from the earbuds. Automatic ear detection is also missing from the Studio Buds, so media playback keeps going even when you remove one or both earpieces. However, you can toggle between ANC and transparency mode from the earbuds, iOS Settings app, or Beats app on Android. Transparency mode lets you hear your surroundings as if you weren’t wearing earbuds at all.

Apple continues to tip-toe back and forth between USB-C and lightning connectors for various products. Since these earphones are targeted at a broader audience outside of the Apple ecosystem, the case charges via USB-C. Unlike recent AirPods models, the case doesn’t support wireless charging.

How does the Beats Studio Buds work with Android?

Pressing the pairing button opens a pop-up menu on Android to connect the device.

Digging into your device settings on Android shows battery life, tracking, and more.

Using the Beats app, you can toggle between listening modes, customize the onboard earbud controls, and rename the earbuds. If you’re struggling to connect the headphones to your device, the app is a great help. However, the Beats app doesn’t offer much after that initial setup phase—it’s mostly a set-it-and-forget-it kind of thing.

How do you pair the Studio Buds to an Android phone?

Pressing the pairing button on the case shoots a pop-up notification to your nearby Android device, similar to how AirPods and Beats pair to Apple devices. Once connected, you can click on the Beats Studio Buds within Bluetooth settings to see battery information, find your headphones, or open the Beats app.

How does the Beats Studio Buds work with Apple devices?

Pairing the earbuds for the first time on Apple devices is as simple as opening the case.

Even without an H1 or W1 chip, the headset pairs effortlessly to pretty much any Apple device. Once Bluetooth is turned on within your device, just place the Beats nearby and pop open the case to see the pairing card pop up.

Read more: What are the benefits of Apple’s W1 chip?

Apple isn't shying away from Android with the Beats Studio Buds

Without an H1 chip, there isn’t smart iCloud pairing across Apple devices, so you won’t get seamless switching from your phone to your computer. There are also no sensors to support Spatial Audio head tracking when watching movies and TV shows. Even without the H1 chip, you can still say “Hey Siri” when paired with an Apple device.

The earbuds maintain a reliable connection with an Android or iOS device. You get Bluetooth 5.2, with support for the AAC and SBC Bluetooth codecs. AAC is optimized for Apple devices, so you might be better off turning it off within the developer settings on your Android device. The Beats Studio Buds don’t have support for higher-quality Bluetooth codecs like aptX or LDAC.

How well does the Beats Studio Buds cancel noise?

Even with ANC turned on, the Beats Studio Buds struggle to reduce ambient sounds below 1000Hz

Noise cancelling on the Beats Studio Buds is mediocre at best. The included ear tips passively isolate high-frequency sounds, but even with ANC turned on the earbuds struggle to attenuate ambient noises.

Most ambient sounds you encounter (like airplane engines, transit, and air conditioning) live below 1000Hz. With ANC on the Beats Studio Buds, these noises will sound about 25% quieter. That might seem significant, but it’s well below the best on the market.

The Beats Studio Buds passively and actively blocks out much more noise than earbuds like the AirPods (which isn’t exactly saying a lot). This will help prevent auditory masking, so your music will sound like it should in most environments. It will also help protect your ears, as good passive and active noise cancellation makes users less likely to crank up the volume on their earbuds in noisy environments.

How does the Beats Studio Buds sound?

These aren’t the bass-heavy Beats of old. The Beats Studio Buds have a consumer-friendly frequency response that closely follows our house curve. Most people should enjoy how their music sounds with any genre of music.

The earbuds do have a noticeable dip in mid-range frequencies, leaving low and treble frequencies louder in comparison. However, the earbuds don’t suffer from the same auditory masking issues of older Beats, which had an extreme boost in bass frequencies that masked other parts of music.

The fundamental frequencies of most vocals lie between 100Hz and 400Hz, a place of 5-10dB of attenuation on the Beats Studio Buds. The vocals on tracks such as good 4 u by Olivia Rodrigo sound noticeably quieter than they do on most studio headphones.

The Beats Studio Buds do a great job of accurately reproducing high-frequency sounds. Cymbals on September by Earth, Wind, & Fire are well defined, and easy to hear in the mix. There’s no custom EQ functionality with the Beats Studio Buds, so you’re pretty much stuck with how they sound out of the box.

Beats claims the earbuds last 5 hours with active noise cancellation turned on and 8 hours without it. In our testing of continuous playback at 75dB(SPL) with ANC turned on, the right earbud lasted 4 hours, 24 minutes, while the left earbud lasted 4 hours, 41 minutes. This is slightly below average among true wireless earbuds but is in the same ballpark as other true wireless earphones from Apple and Beats.

The charging case provides an additional two full charges to the earbuds, with Fast Fuel providing 60 minutes of playback from only 5 minutes of charging.

How good is the Beats Studio Buds for phone calls?

Dual beam-forming mics on the Beats Studio Buds provide adequate microphone quality. Nobody reported experiencing problems hearing my voice through the Studio Buds during calls, even when I was walking through busy streets.

Listen to the Beats Studio Buds microphone demo below and let us know what you think.

As of November 8, 2021, 633 readers have rated the above mic sample as somewhere between “okay” and “good.” This is a pretty typical result for true wireless earphones, and at the upper end of what you should expect to get out of any products of this type.

Should you buy the Beats Studio Buds?

The Beats Studio Buds is in a competitive part of the true wireless earbuds market.

For $149 USD, the Beats Studio Buds is a competitive entry into the true wireless earbud market. As the price drops with future sales and discounts, the Studio Buds is sure to move to the top of many potential buyer’s lists.

There is a lot to like with these earbuds, so you don’t have to worry about buyer’s remorse. Great sound, sweat resistance, and active noise cancellation packed inside a small and comfortable package is a rare find in the sub-$200 true wireless earbud category.

Still, there are considerable downsides to these earbuds for both Apple and Android users. These wireless Beats earbuds ultimately end up sitting on the fence between the two operating systems, compatible with both, but failing to truly excel on either platform.

If the price and Beats branding fit your life, go ahead and buy the Studio Buds. They aren’t the best true wireless earbuds in the world, but they’re the best bang-for-your-buck earbuds sporting either a Beats or Apple logo.

What are some alternatives to the Beats Studio Buds?

The AirPods Pro is hard to beat for iOS users.

For anyone considering the Apple AirPods (3rd generation) or AirPods (2nd generation) over the Beats Studio Buds, we highly recommend that you stick to Beats here. Neither the second nor third-gen AirPods seals to the ear so you get a very poor fit and virtually no isolation. 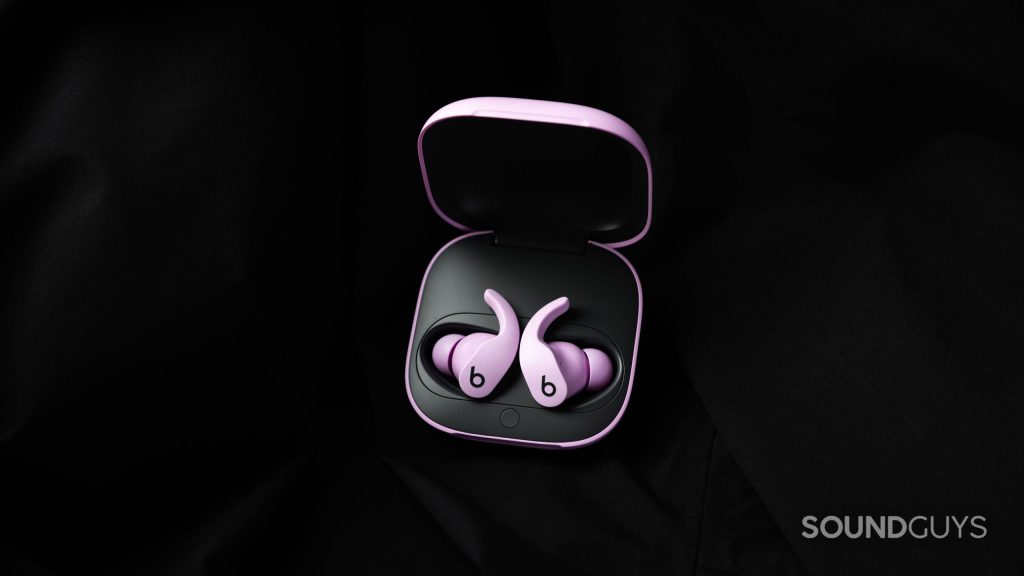 The Beats Fit Pro is a great set of workout earbuds for those who swap between iOS and Android.

If you want all of the premium software features that you get with the AirPods (3rd gen) in a more athletic package, consider the Beats Fit Pro instead. Like the Fit Pro includes active noise cancelling and little wings that extend from the earbuds to keep them in place. This is a more compact design than the Beats Powerbeats Pro and with the Fit Pro, you get things like spatial audio.

What if you don’t have an iPhone?

Android users (especially those with a Samsung phone) should check out the Samsung Galaxy Buds 2, which falls in the middle of the Galaxy Buds Plus and Galaxy Buds Pro. The ANC is slightly better on the Buds 2 compared to the Buds Pro, and much better than the Beats Studio Buds. However, with the Galaxy Buds 2, you don’t get the same IPX4 rating, and you can’t use any of its in-app software features on an iPhone.

If Alexa is your virtual assistant of choice, the Echo Buds (2nd gen) are also worth a look. Amazon’s integrations via the Alexa app allow for a ton of control over the earbuds as well as all your smart home devices.