It's worth spending a decent amount of money on Bluetooth headphones, but no need to break the bank.

By Plantronics
Check Price
The Plantronics BackBeat Fit 6100 are among the most comfortable workout headphones out there, with a sound profile tailored to a session at the gym.
View Full Review
8.3

By Bose
Check Price
If you don't mind paying the Bose premium, you're in for a great pair of on-ear headphones.
View Full Review
7.7

By Sony
Check Price
Sony makes great noise cancelling headphones, and the WH-CH700N can get you more than half way there for less than half the price.
View Full Review

By Phillips
Check Price
They may look a little derivative, but these Phillips noise cancelling headphones are a solid, high-value option.

The sound quality may not quite measure up, but when you’re out and about nothing quite beats the convenience of wireless headphones. The best wireless headphones work with everything, sound great, and are comfortable to wear for hours on end. However, while spending a decent chunk of change on a pair of headphones can definitely pay off, you don’t need to absolutely break the bank to find some that checks all the boxes you want. Here are some of the best Bluetooth headphones under $200 on the market right now.

Editor’s note: this list was updated on April 17, 2020, to include the AKG N60NC, AKG N700NC, and House of Marley Exodus in the notable mentions section.

Audiophiles and audio enthusiasts know Audio-Technica as a premium audio company that puts out high quality affordable headphones time and again. Audio-Technica hit it out of the park with its wireless headphone debut. If you liked the ATH-M50x, you’ll love the M50xBT—they’re almost identical to the wired version, for better and worse. They add playback controls, which are great, but retain the same synthetic padding, which is a bit thin. However, the headband has a sturdy metal frame, and folding the ear cups in and up results in a compact, travel-friendly form.

The Audio-Technica ATH-M50xBT isn’t a flashy pair of headphones, instead focusing on nailing the audio quality the company is known for. It includes the necessities to keep pace with the best of them including Bluetooth 5 and aptX support. Battery life is also excellent; these lasted 31.2 hours on a single charge. If you’re looking for Bluetooth headphones under $200 that can do it all, the ATH-M50xBT is absolutely your best bet.

What you should know about Bluetooth headphones

There are all sorts of features to be on the lookout for when you’re shopping for Bluetooth headphones under $200. One of the most meaningful is active noise cancelling, but what is it? You can dive deeper if you really want to learn the science behind it, but if you don’t feel like dusting off your old textbook and want the TL;DR version, here it is.

Tiny microphones built into the headphones pick up what’s going on around you and then play the opposite sound wave into your ear along with your music. Because the sound wave that’s produced by the headphones is basically the exact opposite of the one that’s outside of the headphones, it cancels out. Leaving you with just the blissful sound of your music. See? That wasn’t so bad. Science can be cool.

The next thing to really consider is codec support. Some of this depends on the device you use with your headphones, but what makes LDAC or aptX HD good? We’ve got a bit of technical jargon to go over, but we’ll try and keep it relatively short. For a full breakdown make sure to check out this great article by Rob Triggs over at our sister site Android Authority.

LDAC is supposed to be better is because it has a higher bitrate than the standard SBC codec, but our testing revealed that LDAC falls short of hi-quality claims. We’re still waiting to see if aptX Adaptive is going to be as good as it seems, but luckily any issues are increasingly hard to hear as we age because, sorry to break it to you, our ears aren’t that great when we’re old. 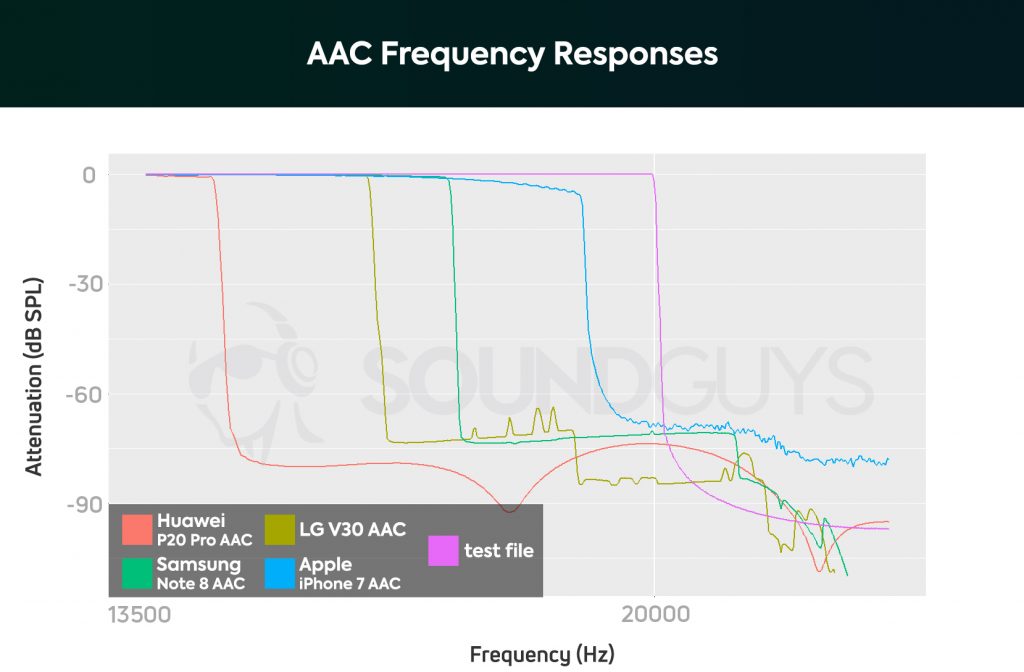 The AAC codec performance varies greatly depending on what source device is being used.

Even if your phone doesn’t currently support it, you should still get Bluetooth headphones that support these codecs anyway. Android 8.0 brings support for these wireless standards to lots of phones in the near future and assuming your headphones last longer than your smartphone does: your headphones will only sound better as the tech in your phone catches up. Additionally, the AAC codec performs far better when paired with an iPhone than an Android phone, so if you’re in the market for headphones to use with your Samsung Galaxy phone, maybe avoid the AirPods.

For a great workout experience, check out the Plantronics BackBeat Fit 6100

The Plantronics BackBeat Fit 6100 check all requirements for a great pair Bluetooth headphones for working out. These are comfortable, lightweight, and extremely water-resistant (IPX5-rated). The memory foam earpads evenly distribute weight along the area surrounding the ear, and they’re plush enough to be comfortable with glasses. 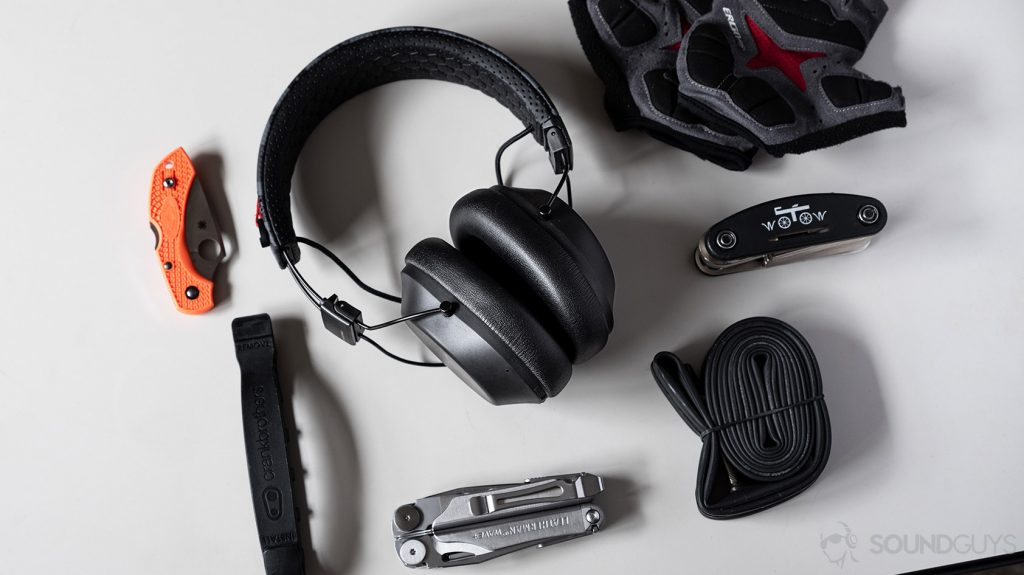 Other great features include Bluetooth multipoint support, which lets you connect two devices to the headphones simulatneously, and it may remember up to eight devices for fast switching. Standalone battery life is great, too; you get ~27 hours of listening on a single charge. Once the battery dies, you only need to charge for 15 minutes to get six hours of playback. One of the greater annoyances is the microUSB, but its forgivable considering how much these headphones offer.

Sound quality isn’t the best because auditory masking rears its ugly head into nearly all media playback, but since the BackBeat Fit 6100 are explicitly billed as Bluetooth workout headphones, the emphatic bass response makes sense. In fact, many athletes prefer this type of sound to keep them pumped during their routines.

On the whole, Plantronics’ Bluetooth headphones and earbuds are no stranger to success and the same goes for its latest over-ear model. Plus, the tension headband is a neat, yet functional trick for adjusting the headset according to your workout intensity. For ~$130, you’ll have a hard time finding a better pair of workout cans.

If you’re on the hunt for a pair of great on-ear Bluetooth headphones under $200, look no further than the Bose SoundLink On-Ear Wireless. Bose gets a lot of flack for exaggerated treble emphasis, but time and again the company produces the most comfortable headphones out there. 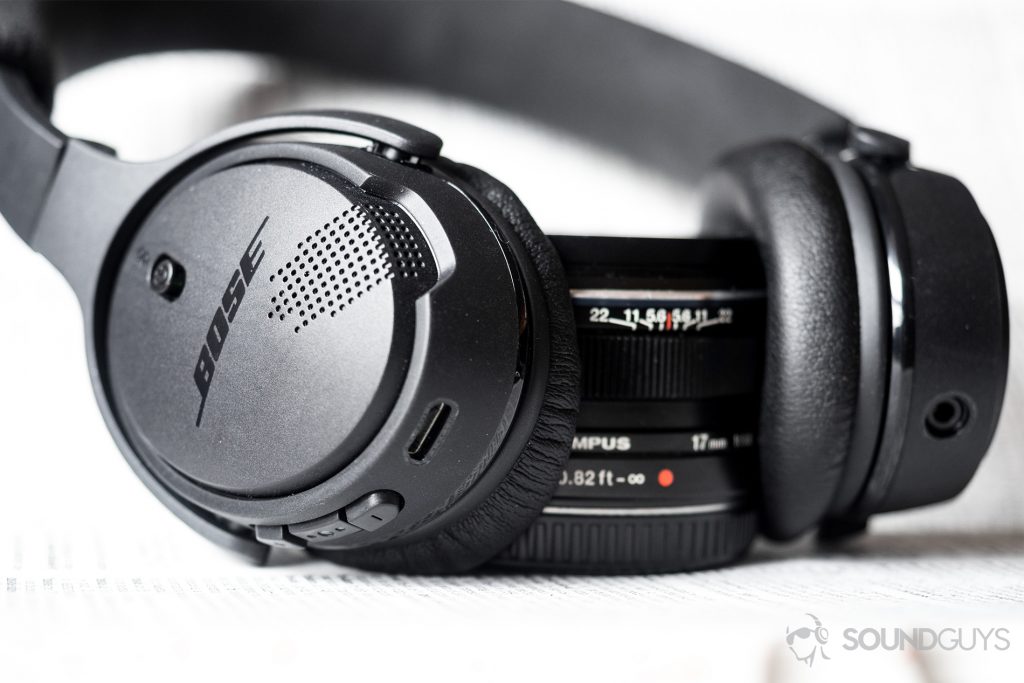 As enthusiasts have grown to expect with Bose, the mids and treble are emphasized, but that’s fine. If your ears favor pop music, you’ll probably enjoy the prominent vocals and the feigned clarity of overemphasized highs.

Battery life clocks in at 15 hours, which is enough to get you through about a fortnight of public transit commutes. And topping them up takes a little over 2.5 hours, which is on-par for wireless headphones.

These are comfortable in large part due to their lightweight plastic build, though that plastic seems pretty flimsy. If the wrong thing falls on them in a bag, odds are these headphones will be toast—our unit had clear evidence of superglue holding things together in one of the hinges. However, even with that in mind, the Bose SoundLink On-Ear Wireless headphones very comfortable and a great option for the on-ear crowd.

While Sony flagship headphones the WH-1000XM3 may be the current king of the audio market, you don’t need to spend so much to get a solid pair of noise cancelling headphones. The Sony WH-CH700N offers slightly stepped down performance for a slightly reduced price. These over-ear Bluetooth headphones feature a lightweight plastic build, which brings some durability concerns, but makes for a solid travel companion when paired with the rotating ear cups. The ANC feature isn’t as proficient at filtering out low-end noise as these headphones’ flagship sibling, but it still works reasonably well. And on top of that, the WH-CH700N feature very accurate audio and mic output, which is pretty rare for headphones with embedded microphones.

As I mentioned earlier, these headphones come with virtual assistant integration, so you’ll be able to get Amazon Alexa and Google Assistant reading your texts to you and answering your questions on the fly. These headphones also offer absolutely fantastic battery, clocking in at 43.57 hours of playback on a single charge. When you finally do run the battery down, you’ll be able to get an hour of playback time after only 10 minutes of charging.

For the price, the Sony WH-CH700N offers a ton of features, and decently executes on all of them. Shame it’s still got that classically terrible product name, though.

If the Philips 8000 Series Wireless Noise Canceling Headphones looks a little familiar to you, you’re not alone. These headphones look suspiciously similar to the Sony WH-1000XM2 under the hood, but that’s okay—those are great headphones. These are… less great, but for around $150, they definitely get the job done. The 8000 Series bring touch controls, Google Assistant integration, Bluetooth 5, and ANC to affordable package. The battery is still in our testing, but can apparently last up to 30 hours on a single charge. With fast charging, you can get two hours of playback time after just five minutes of charging, and up to six hours of playback time after just 15 minutes. In our brief experience, the touch controls are as responsive as something like the WH-1000XM3, but for the price you could do a whole lot worse when it comes to Bluetooth headphones under $200. 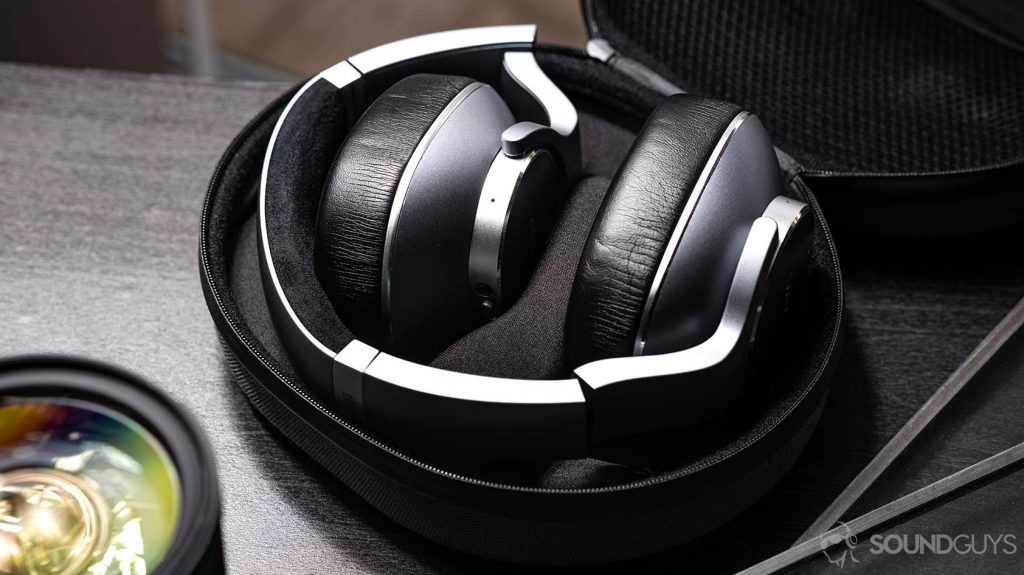 The headphones fold up and fit into the included zippered carrying case.

SoundGuys is our daily grind and our mission is to leave our readers more informed and interested in the world of audio. We understand that audio is both an objective and subjective experience. In order to account for the former, we run as many products as possible through our objective testing methods.

You may have noticed that we don’t run ads on our site, and that’s no accident: we don’t want any extraneous

Ultimately, we want you to glean as much information from these lists and the linked features as possible. While our site does operate on affiliate links, we are transparent about our ethics policy.