Cord is proprietary
Soundstage is lacking

If you're looking for an all-around solid pair of headphones you can use whether you're editing videos or listening to music on the bus, this should be on your shortlist. 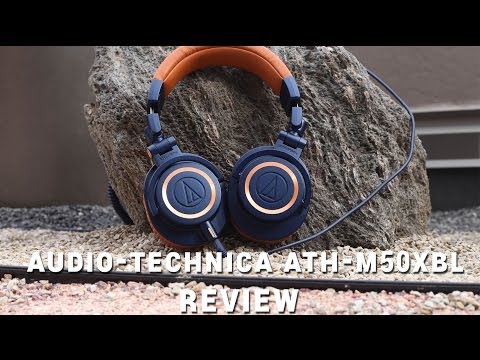 Audio-Technica is one of those companies that has earned the respect of the audio world, and one of its most popular products is the ATH-M50x headphones. This headset went viral several years ago and, as is the case with all great headphones that have a 3.5mm connector, is still going strong. But what is it about these headphones that make it so good for just about everyone? Let’s find out.

Who should get the Audio-Technica ATH-M50x?

The Audio-Technica ATH-M50x is a staple in the audio world.

When it comes to build and design, Audio-Technica hits the nail right on the head with these headphones. It’s stylish enough to stand out but not so flamboyant that it draws unwanted attention. Since its initial release, this headset has become available in a few different color options including subtle dark blue with tan leather, and stealthy all-black.

Aesthetics aside, the ATH-M50x is a pretty sturdy pair of headphones. The entire build is plastic, so don’t expect anything premium here, but combine the lightweight plastic with the plush padding and it is comfortable to wear for those long listening sessions. The ear cups also rotate 90 degrees so you can have it flat around your neck when not in use, and you can adjust it ever so slightly to get the most comfortable fit. While it’s not as comfortable as something like the Bose QuietComfort 35 II, it’s certainly more versatile when it comes to finding a good fit.

On the downside, the ATH-M50x doesn’t breathe very well due to the padding, so if you’re in a hotter environment you might find that you need to take it off from time to time to avoid sweaty ears. While we had no issues with durability, it’s worth keeping in mind that it is made of plastic so you might not want to throw a pile of books or a laptop on top of it.

How do you connect these headphones?

The Audio-Technica ATH-M50x came out before everyone decided that removing the headphone jack was a good idea (which it wasn’t), so all three cables that are included in the box have 3.5mm jack at the end. As we mentioned above, it does come with a quarter-inch adapter so if you have an audio interface or higher end piece of gear you can just screw it on.

The ATH-M50x are wired only.

Audio-Technica also has a wireless version of these headphones, the ATH-M50xBT. And I encourage you to go for that option over the aging ATH-M50x, not simply for the wireless upgrades, but the removal of the cable-locking mechanism. By removing this, you can use any old 3.5mm to 3.5mm TRRS cable lying around should yours break. Just keep in mind that as convenient as Bluetooth is, it isn’t perfect and the quality of certain codecs is dependent on whether you’re using an Android or an iOS device.

How does the Audio-Technica ATH-M50x sound?

The ATH-M50xBT frequency response is identical to the wired version.

The ATH-M50x can passively isolate some low-frequency noise.

The Audio Technica ATH-M50x is marketed as monitor headphones, but it’s more like a Swiss Army Knife of audio if you’re going just by the sound performance. Its frequency response is relatively neutral, but there is still a slight emphasis on notes in the lower frequencies that you won’t find on higher-end studio headphones. These headphones sound great when it comes to classical music, especially in the upper frequencies where string instruments lie. The ATH-M50x reproduces mids and highs with little auditory masking.

Passive isolation is okay: incidental sounds like nearby conversations and the clang of dishware is blocked out by the headphones, but these aren’t the headphones to take onto an international flight.

Should you buy the Audio-Technica ATH-M50x?

Audio-Technica ATH-M50x
All prices listed in USD unless otherwise specified. Prices may change over time, and vary by region. Unfortunately, we cannot list Amazon prices on the site, as they vary greatly by currency.

Yes, the ATH-M50x still have excellent sound quality that is up to today's standards, and they're lightweight and comfortable too. If you're looking for a more affordable pair of studio headphones, the Sony MDR-7506 are a great alternative.

What colors can I get these in?

Currently, the Audio-Technica ATH-M50x is available in black, Gun Metal, White, and purple. The Bluetooth version also has a black version and a purple version. Just remember, some of these color options are more expensive, if you're shopping on Amazon.

Do the ATH-M50x have a microphone?

Do you need an amplifier for the Audio-Technica ATH-M50x?

No, you don't need an amp! You can enjoy these with any source that supports the 3.5mm TRRS plug.