The ultimate guide to Bluetooth headphones: Wired is still king for quality

Give us back the damned headphone jack.

Look, we get it: Bluetooth headphones are convenient. It’s the K-cup coffee machine of audio. Like the aforementioned liquid sadness brewer, Bluetooth is a crappy, expensive facsimile of the real deal—but many, many people enjoy it because it’s convenient and they don’t need gourmet coffee every day.

I’ve never enjoyed the audio quality of Bluetooth headphones, but that’s just me. The sound is better than it ever has been, and it’ll get you 99% of the way there—but not everybody is willing to make that tradeoff. Since USB-C headphones have largely ceded their market advantages over Bluetooth, we have to examine the consumer audio technology’s performance in a world where the headphone jack is disappearing.

Bluetooth is extremely convenient, but at a cost.

We deal in facts around these parts. That’s why we’ve spent the better part of last month testing codecs and their performance ceilings. Spoiler alert: it’s mostly bad news.

Editor’s note, this article was updated on January 13, 2020 to address the announcement of LE audio and the LC3 codec.

We use a commercially-available Bluetooth high-def interface with an S/PDIF output to test the Bluetooth output of four flagship phones. This way, we’re able to record test signal output and compare the datasets with our in-house analysis software. We kicked the tires on a 96kHz/24-bit test file to see how Bluetooth handled high-bitrate music, as well as normal 44.1kHz/16-bit files to see how each codec treated CD-quality streaming audio. We then measured the recorded sample against the original file. We used both lograrithmic sine sweeps, and complex signals like square waves in order to provide a more realistic set of tests for how people actually use Bluetooth headphones.

We then fed the data through our charting programs, and plotted responses to identify issues. We also reached out to select companies for comment on these issues, but received no comment.

Every single Bluetooth codec has significant quality issues—despite many creative solutions employed to make the most of the limited bandwidth the standards employ. For those keeping score at home: not a single codec available can meet wired signal quality. Though Bluetooth audio has come a long way since its noisy beginnings, it’s still not ready to replace the headphone jack. Qualcomm’s aptx HD, and Sony’s LDAC 990kbps codecs come close, but everything else falls far short of the mark.

However, most people won’t be able to hear the difference if they’re older than 24, have some form of noise-induced hearing loss, or are in the presence of outside noise. For this reason, we recommend wireless Bluetooth headphones for those commuting, or in noisy situations. If you’re listening primarily at home at the computer—get a set of wired headphones.

We’ll show you two types of charts: noise charts and frequency response charts. The first shows you how much noise the Bluetooth adds, and the second shows you how it changes the way your music sounds. Many of the codecs we found actually cut out high frequency noise, but that’s only a problem if you can hear it.

The ultimate guide to Bluetooth headphones: AAC only acce...

While iPhone users can expect that their phones are missing essential parts to look good, AAC is one of those codecs that maybe cut a few too many bits out of its data transmission. By using an aggressive psychoacoustic model of compression, AAC seeks to cut data where you wouldn’t normally be able to hear it anyway—but it gets a little too aggressive at times.

AirPods may be trendy, but they have significant sound quality problems.

AAC has some advantages when it comes to latency, but we recommend avoiding this if you care about audio quality. We found high levels of noise and lower than average frequency cutoffs—both unacceptable to audiophiles and younger listeners. Though the sound isn’t as bad as some may make it out to be, the shortcomings are noticeable to the human ear at normal listening volumes.

It may be high-frequency sound, but these drop-outs will be audible to younger ears.

Unlike with other codecs, AAC test signals from Android phones like the Huawei P20 Pro, LG V30, and Samsung Galaxy Note 8 all vary wildly. Though we can’t definitively say why each Android device seems to handle AAC encoding differently, the fact of the matter is that only Apple can do it well. We suspect some of the power saving features baked into the Google ecosystem’s varying hardware has consequences for audio playback. Nowhere is this more apparent than Huawei’s power-sipping P20 Pro, which seems to cut out at around 14.25kHz.

Our best guess is that Android phones differ in how they handle task scheduling in the CPU, which has consequences for battery life, and (you guessed it) AAC Bluetooth performance. As you can see above, AAC doesn’t hit the maximum range of audibility.

The problem is made even worse by the fact that Android phones can’t handle AAC in a method that approaches Apple’s performance with the codec. Consequently, we will no longer be recommending AAC-only headsets here at SoundGuys, as the experience is that broken from source to source. The results are crappier and noisier than the other codecs by a longshot.

Lossless audio only exists with LDAC 990kbps, but only sorta

LDAC is a strange family of codecs, not merely because they’re the only codecs that really attempt the hi-res thing, but because they have perplexing issues with common phones. For example, the bitrate defaults are wildly different from phone to phone. The Samsung Galaxy Note 8 and LG V30 both default to 660kbps, and the Google Pixel 3 defaults to the lesser 330kbps. However, the noise present with every LDAC connection is far greater than it is with a regular old 3.5mm headphone jack.

The new Sony WH-1000XM3 uses LDAC as its main Bluetooth codec, but you might not be getting the best they have to offer.

Despite big promises from Bluetooth’s only Hi-res codec, the standard doesn’t really deliver at best, and it falls far short with its basic 330kbps setting. Both the 660kbps and 990kbps connections offer decent quality, but the 330kbps setting has a lot of noise—and a comparatively poor frequency response with higher-def content. You probably won’t hear it, but it definitely falls short of the marketing.

Even if you force the 990kbps in the developer options, the signal strength is iffy enough that you may experience a cut out or two here and there if the phone is in your pocket. We recommend using 660kbps just to be safe.

Most of Bluetooth’s issues are inaudible to older listeners

The ultimate guide to Bluetooth headphones: Your ears are...

If you’re over the age of 24, Bluetooth audio is more than likely good enough for you. Most people older than that cannot hear the audible effects of Bluetooth… outside of AAC’s shortcomings, and a certain level of noise.

Every single Bluetooth codec out there exhibits a much higher level of noise than wired audio, and it isn’t even close. Where wired audio can handle CD audio and 24-bit audio, Bluetooth simply can’t… although 24-bit is dramatic overkill anyways. If you like your music loud, Bluetooth will be far noisier than wired listening over 72dB.

aptX and aptX HD get close to CD-quality, but not quite as advertised

The ultimate guide to Bluetooth headphones: aptX and aptX HD

Of the tested codecs we met, aptX and aptX HD fared the best out of all our candidates. While that may seem strange to say, on the whole their results were right where they needed to be in order to stand in for a wire for commuters, and listeners over 40. You’d really only run into issues at high volumes (90+dB), so while aptX isn’t quite able to keep up with CD quality, aptX HD is able to get extremely close to the mark with a little processing creativeness. Both codecs fall short in the highest frequencies a human could potentially hear, but the vast majority of people can’t hear sounds over 18kHz anyway.

aptX HD offers a noise floor at about the dynamic range offered by a CD. Unfortunately, it doesn’t quite get there.

However, that software processing can’t fix noise issues in high notes, so for best results you should listen at volumes below 90dB. Any higher and you’ll be able to hear noise above 1kHz. And before you ask: no, that’s not very quiet.

A new generation of Bluetooth is on the way

With all that said, we should point out that Bluetooth SIG announced a new generation of Bluetooth audio which should offer some interesting upgrades to the current experience. Not only is there a new codec, LC3, on the way, but it also seems to be an AAC on steroids that offers better quality than SBC at lower bitrates. While much hay is being made about the low-energy audio feature of the Bluetooth 5.2 stack, the new codec also works on Classic Bluetooth, offering LDAC-like quality (at least, from what we heard at the Fraunhofer IIC booth at CES 2020). This is going to be a very cool update to Bluetooth, and we’ll report back once we have more data on the subject. 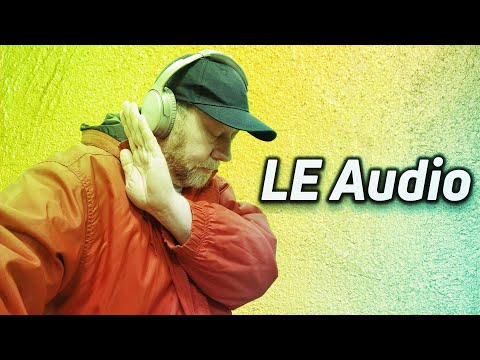 Bluetooth may be good enough for most people, but it’s not good enough for all people, and that’s a problem. While the benefits of high-bitrate music are academic, there are some flaws with Bluetooth audio that prevent it from replacing the 3.5mm TRRS plug in all contexts. It’s a more expensive, less effective solution.

There are new codecs on the way, like Qualcomm’s aptX Adaptive, but in the meantime: Bluetooth audio isn’t the best way to consume high-quality content. If you’re looking for commuting headphones, they’re great: but music lovers listening at the computer will want something with a wire. Not only will it be cheaper, but it’ll work better too.