The industry standard for a reason.

The Sony MDR-7506 might not be the best for enjoying your brand new listening station, but there's a reason this is a standard when it comes to audio production and mixing. 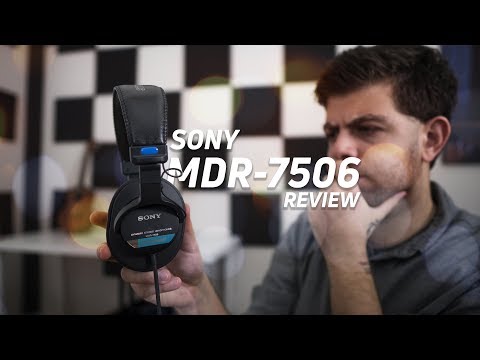 There are a few different scenarios when a pair of headphones become a “must-have” item. One instance is travel and this calls for a pair of active noise cancelling (ANC) headphones when you demand peace and quiet. Then there are exercise and more casual use cases when sound quality takes a backseat to durability. Let’s not forget the audio engineer whose headset is a tool, and one pair of headphones has become all but an industry standard: the Sony MDR-7506.

You’ll find this on the heads of people in recording studios, newsrooms, and video production crews. As someone who records in studios and whose job requires editing audio, I figured I’d try the MDR-7506 out. And although I did like it for work, there were some aspects that made it a little frustrating to use at times. But first, let’s talk about who should buy this studio headset.

Editors note: this Sony MDR-7506 review was updated on September 30, 2021, to add additional information about the history of the Sony MDR-7506 and mention the Sennheiser HD 280 Pro as an alternative.

Sony made these for audio production, and they’re good at what they do.

Entirely made of plastic, the Sony MDR-7506 isn’t the most durable pair of headphones.

There’s plenty to love and loathe with the MDR-7506 design. This headset is made almost entirely of plastic with exposed metal, and visible screws. This lightweight material doesn’t weigh you down, but it also means that the headset isn’t all that durable. With that said, this is designed to be repaired, not just replaced, and Sony even has service manuals for the model.

Sony provides a soft carrying case, but that isn’t enough to protect the headset if it jumbles around in a bag. On the bright side, this won’t cost an arm and a leg to replace, even if it breaks. Each headphone folds down into a more compact footprint, so you can travel with ease.

I had no problem driving these headphones with cell phones or even a tiny synthesizer.

The headphones don’t have any kind of plush memory foam padding, but this is sufficiently comfortable for mixing. True, the headband force is a bit much and the crown of my head gets sore after a couple of hours, but you can look into third-party ear pads for relief.

The look and feel is cheap with the padding wrinkles and fake leather stitching combined with the obvious branding on both ear cups. All of that put together results in something that simply isn’t pleasing to the eye. To be fair though these came out a few decades ago, and at that time they were just updating a pre-existing design established with the (discontinued) Sony MDR-V6 from 1985. So if you get Back to the Future and DeLorean vibes from the MDR-7506, now you know why.

The Sony MDR-7506’s can fold down to a more compact size (and they have a satisfying click while doing so).

The cable is non-removable (so don’t break it), but it’s super thick and durable and weighs the headset down. While this could be a “negative,” it adds a nice heft that inspires confidence. The long cable is great when you’re at a desk, but becomes a hassle if you take it out and about.

This is a good old fashioned pair of headphones that ends in a gold-plated 3.5mm connector with threading on it to attach the included 1/4-inch adapter. Now, the MDR-7506 has an impedance of 63Ω, so weaker smartphones might need a bit of a boost to power it. Granted, I have no problems when connected to an iPhone X (with a dongle), Pixel 2 (with a freaking dongle), my MacBook Pro, or my OP-1 synthesizer. Each sufficiently drives the headphones without issue.

How well does the Sony MDR-7506 block out noise?

While the Sony MDR-7506 does a good job at blocking higher frequencies (like most over-ears), they struggle with bass notes which barely get blocked at all.

Passive isolation isn’t very good, likely a consequence of the cheap ear pad material. Pretty much all low-frequency sounds make it through the headphones, which isn’t ideal if you’re mixing audio from your populated apartment. The headset manages to block out some high-frequency, incidental sounds though.

The frequency response of the Sony MDR-7506 does a good job of powering all parts of the frequency range equally.

Now, when it comes to audio production, you’ll hear terms like “flat” and “neutral” thrown around a lot, and what this means, in a nutshell, is that the drivers reproduce each frequency in the frequency range at the same sound-pressure level. That quality is generally what differentiates studio headphones from consumer headphones.

While that’s what most headphones meant for this kind of work aim to achieve, the Sony MDR-7506 tends to emphasizes mids and highs, which few consumer headphones do. It’s no secret that Beats headphones add a hefty amount of emphasis to lower notes, which results in a booming bass that consumers enjoy.

The 3.5mm connector is the only way to connect this to anything, but it also comes with a 1/4-inch adapter.

I’m used to the thumping kicks in the song Girls by Slow Magic being front and center, but here they’re left in the background, while the rhythmic shake/claps that come in at 0:39 take center stage. Even with everything going on at this point in the song, you can still clearly hear the slight reverb added to the claps giving it a livened feel.

The frequency response bodes well for all genres of music.

This livened feel is also present in Home Again by Michael Kiwanuka. The song starts out acoustically with just Michael’s vocals and his guitar drive everything forward, and in most headphones, the bass strings that he plucks at 0:14 are loud and noticeable. Through the MDR-7506, those plucks don’t have the same impact; instead, his vocals are louder.

This is all well and good for people who don’t want bass taking over a song; except it’s almost too much. At certain points in the song, you can hear some distortion and creep in.

The price, comfort, and durable design all make the MDR-7506 great for people recording live in the field or anyone editing in a studio.

The MDR-7506 headphones have a plastic build with a are over-ear cans meant for production.

I edited a podcast with a pair of crummy in-ears while I was traveling, and it sounded fine to me—until I got home and listened with Sony MDR-7506. Every little flaw became immediately apparent. For anyone who needs the finished product to sound perfect and doesn’t want to spend thousands of dollars on a pair of reference headphones like the Sennheiser HD800, it’s easy to recommend this.

Sony MDR-7506
All prices listed in USD unless otherwise specified. Prices may change over time, and vary by region. Unfortunately, we cannot list Amazon prices on the site, as they vary greatly by currency.

What should you get instead of the Sony MDR-7506?

While the Sony MDR-7506 is more used than almost any other headset in the creative industry, it’s been around a long time, and now there are plenty of competitors that may be worth your while.

The AKG K371 is an absolutely stellar low-cost set of studio headphones, even though it’s usually $60 more expensive than the MDR-V7506. For that extra cash, you’re getting improved sound quality and comfort—though you could get two MDR-7506 headsets for the price of one of those.

The Audio Technica ATH-M40x is another pair of sub-$100 studio headphones, long-favored by budding bedroom producers. It features a compact and foldable build, and great sound quality for on-the-go audio mixing. Sennheiser’s HD 280 Pro lands squarely in the same price bracket and similarly has a de-emphasized low end, but it also has some of the same features as the Sony MDR-7506, such as the plastic build and hefty coiled cable.