Audio distortion is a term most people are familiar with, largely thanks to Jimi Hendrix, Eddie Van Halen, and everyone who has attempted to imitate them by turning their amplifiers up to 11. But what is distortion, what causes it, and why is it the enemy of audiophiles?

People can usually recognize audible distortion, although it manifests in different ways. Distortion ranges from subtle, barely perceptible coloration, to faint “fuzz,” to a nasty buzzing on certain notes or frequencies—it can be so bad as to make it sound like something is really broken. More often than not, distortion creeps in as we turn up the volume, and there are reasons for that.

How do you define distortion?

Cranking the volume knob can result in distortion creeping in.

First, let’s define what we mean by distortion in general terms:

Audio signals get distorted in much the same ways that an image gets distorted when it passes through a dirty or broken lens, or when the image is saturated or “blown out.” Distortion can occur at multiple points in the audio signal chain, in both recording and playback. 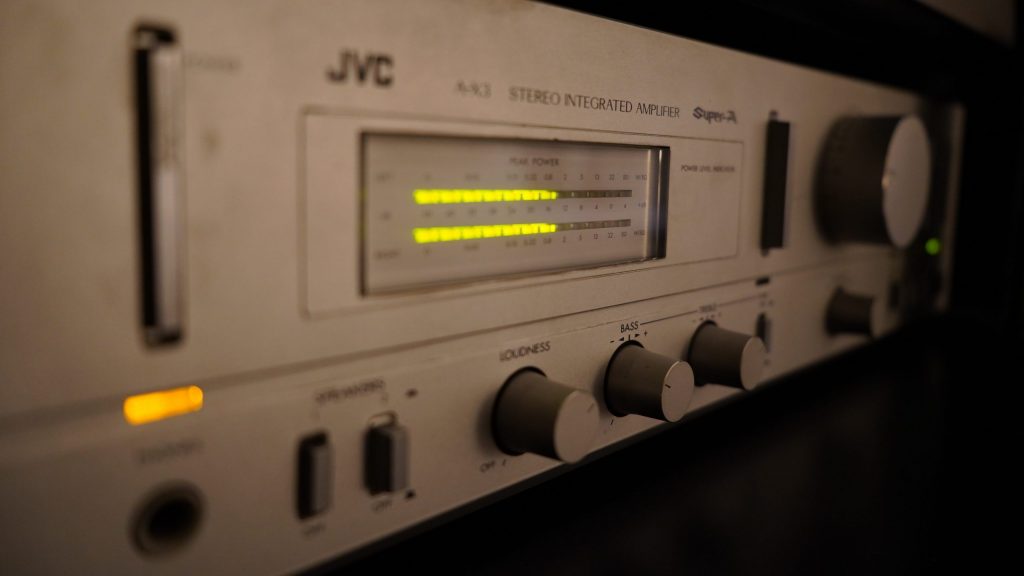 alvaro ortiz Too little amplifier power is a bad thing.

A signal distorts when an audio device’s output doesn’t track the input with perfect accuracy. The purely electronic components of our signal chain (amplifiers, DACs) tend to be far more accurate than the electro-acoustic components, known as transducers. Transducers convert electrical signals to mechanical movement to create sound, like a loudspeaker—or vice versa, like a microphone. The moving parts and magnetic elements of transducers typically become very non-linear outside of a narrow operating range. However, if you push electronics to amplify a signal beyond their capabilities, things can quickly start to sound bad.

Distortion is used creatively in music production, but that is a whole subject in itself. What we’re focusing on here is distortion in audio reproduction—otherwise known as the playback path—meaning how you listen over speakers or headphones. For accurate sound reproduction, which is really the primary goal of HiFi products, all distortion is considered bad, and equipment manufacturers aim to eliminate as much of it as possible.

How is distortion quantified?

Sam Moqadam Distortion generated at the sound’s source is an important element of certain musical genres, but we’ll save that for another day!

Our input signal is the piece of audio we want to play, also known as the “program material”—at least it would be if we were to subjectively describe any distortion that might be present. At SoundGuys, however, we’re in the business of avoiding subjective descriptions when good objective metrics exist. We are going to make objective measurements!

When we want to characterize audio systems we use test tones (aka sinusoids), or sinusoidal sweeps. These are simple audio signals, made up of sine waves at defined frequencies. Alone, test tones do not sound musical but are actually the basic building blocks of all complex, musical waveforms, and allow us to create accurate, repeatable, and standardized tests. With tests tones, we can more effectively observe and describe the nature of any signal distortion that our device creates under a test.

What is linear distortion? Frequency response can often be thought of much like a filter, that can boost or attenuate the input signal.

Strictly speaking, any device that doesn’t have a perfectly flat frequency response produces linear distortion. This type of signal distortion prevents the original spectral content of the signal from being faithfully reproduced. An ideal frequency response is typically thought of as a flat line—having no linear distortion. Keep in mind though that the ideal response may not be a flat line, depending upon the intended application of the device.

It is also possible to change the shape of the audio waveform without modifying frequency content at all by distorting the relative timing of different frequencies’ arrival (this happens in passive loudspeaker crossovers for example). You can use square waves to test for this, as changes to their shape reveal timing errors, and looking at the waveform quickly identifies problems. Phase vs frequency plots can also reveal this timing distortion. Ideal devices that do not introduce phase or timing errors are called linear phase.

What is non-linear distortion? How a non-linear transfer function changes the shape of a sinusoidal input waveform, resulting in non-linear distortion.

A perfect sine wave consists of only one frequency, though real devices produce non-linearities that add harmonics and distort the signal either a little or a lot. Non-linearities are inherent in devices that have an input-output characteristic that isn’t a straight line (e.g., the illustration above). Harmonic distortion is the addition of new tones to the audio signal. These distortion products occur at integer multiples of the original signal’s frequency and are harmonically related to the original tone. When the signal is a single sine wave (tone) of frequency f1, harmonic tones are f2, f3, etc., at integral multiples of the original tone.

For example, a 1kHz fundamental signal that has been subjected to non-linear distortion will produce energy at 2kHz, which is the second harmonic, 3kHz (the third harmonic), 4kHz (the fourth harmonic), and so on. Total harmonic distortion (THD) is the sum of all the harmonics measured in the product’s output. A THD measurement sums all the distortion products by adding up the extra harmonic energy into a single value, expressed as either a percentage (which we’ll typically show on a logarithmic scale), or as a dB value, representing the proportion of the energy compared to the fundamental or desired signal. The THD ratio will be a percentage value of less than 100%, or a negative decibel value. For example, 1% THD is equivalent to -42dB, 89% THD is -1dB. When making these measurements, the analyzer must have a significantly lower THD than the device under test.

Here’s a video that allows you to hear the effect of increasing amounts of THD applied to music and test tones.

THD is the most common distortion metric you will come across. In fact, the terms THD and distortion are often used interchangeably, although that’s an oversimplification, as many types of distortion exist.

How do typical headphones measure for THD?

Below are some real life examples of THD measured on headphones using our acoustic test head. As you can see, the results are plotted on a graph with a logarithmic frequency scale on the x-axis, just like a frequency response chart. An example of a headphone exhibiting a low measured %THD An example of a headphone exhibiting a high measured %THD

Here is an example consisting of two different in-ear headphone products from Sennheiser (IE 300, IE 900), which appear to have quite similar performance based on their frequency responses: However, the % Total Harmonic Distortion plots for these same products show us that the product engineers have made observable improvements by decreasing the non-linear distortion produced by the higher tier headphone.

Why doesn’t SoundGuys provide THD graphs for every product?

Although our standard headphone test provides us with information about many performance parameters, including distortion, we don’t generally publish all the data we collect. In fact, we rarely talk about THD in our headphone reviews, for two reasons:

We don’t currently include all of our measured data to keep our reviews as focused as possible on what you need to know, without adding unnecessary detail—or fodder for misunderstanding. This means you’re getting the distilled version of a product’s performance data, curated by our audio experts.

Next: What is dither, and why does it matter?

Are your headphones or earbuds a health risk?

Balanced vs unbalanced connections—what does it mean and what...

How to EQ your Bluetooth headphones with a mobile app

How do noise cancelling headphones work?