Don’t use AirPods with Android

If you're an Android user concerned about audio quality, you'll pass on the Apple AirPods.

The apple AirPods is everywhere, but that doesn’t mean we Android users should opt for them. Rather, AirPods should be avoided like the Bluetooth plague they are to Android systems. That’s right, while AAC performs well enough on iPhones, it just doesn’t cut it for Android devices.

Although the line between Android and iOS devices further blurs with each passing keynote, AAC streaming performance does differ between the two systems.

Editor’s note: this article was updated on October 14, 2021, to add a contents menu and for minor wording changes.

AirPods use AAC, and that’s a problem for Android

Here, you can see the measured high-frequency cut-offs, comparing AAC with SBC on a variety of phones.

Android handles Bluetooth codecs differently depending on the device, connection quality, and Android’s Energy Aware Scheduling algorithms, which determine a CPU’s efficiency. By de-prioritizing Bluetooth encoding, Android may be degrading streaming quality for the sake of energy efficiency.

In a similar vein, AAC takes psychoacoustics into account and streams data accordingly—something that not even aptX does. While we could dive deeper into the nitty-gritty of psychoacoustics, in short, it’s the scientific understanding of how humans perceive sound, positing that we only have so much bandwidth to process simultaneous sounds. The AAC algorithm that models this eats up a lot more resources than other Bluetooth codecs, and it shows when you test.

Understanding the processing capabilities required for AAC to function sheds light on why Android phones have been shown to struggle. On the iPhone, however, listeners benefit from a much lower noise floor, one that extends -11dB below the Samsung Galaxy Note 8’s. This means that iPhones, at least the iPhone 7, relay a much cleaner sound when streaming via the AAC codec than what the best Android AAC performer tested had to offer.

Another thing to note is that the Apple AirPods has Apple’s H1 chip integrated which makes for streamlined connectivity with iPhones. This doesn’t mean anything detrimental for Android users except that you are missing out on a slew of software features that an iPhone user would benefit from, such as battery optimization and automatic device switching.

Should you even care about AAC vs other codecs?

While AAC may seem promising and impressive considering that the data reduction accounts for psychoacoustics, it’s not as good as we’ve been told. Even if you’re using an iPhone, you’re still not hearing CD quality, although you could fairly make the argument that your ears are unable to differentiate between the lossless and compressed data.

It’s not just the codecs; the fit is substandard too 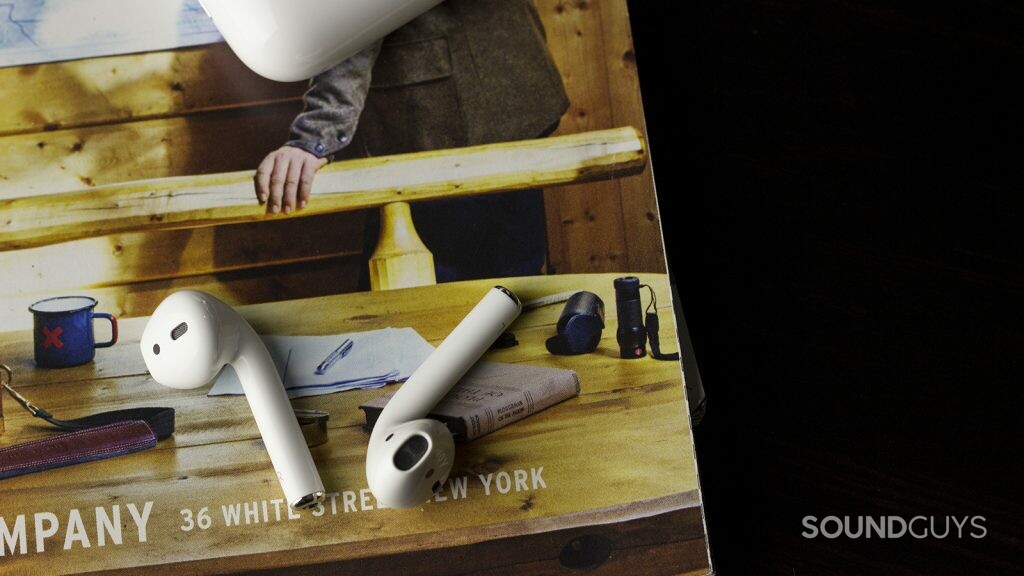 The Apple AirPods is easy to connect, if it’s connecting to an iOS device.

As any SoundGuy will tell you, audio quality is well and good, but it’s nothing without one thing: a good seal to the ear canal. While it’s understandable that Apple designed the AirPods so the earbuds would fit a majority of ears, they cannot form a proper seal with your ear canals.

The negative effect of this is two-fold because 1) your music is going to lack bass, since earbuds like these are tuned to match the acoustic impedance of a properly sealed ear canal; and 2) the AirPods allow for the ingress of external noise, which degrades sound quality due to compromised isolation. The latter makes increasing the volume much more tempting which could ultimately impair your hearing.

What about the Apple AirPods Pro?

The Apple AirPods Pro still uses the Apple H1 chip and only supports SBC and AAC. However, the fit and isolation (in part due to the active noise cancelling) are much better. The AirPods Pro has silicone ear tips that you can replace depending on what size fits you best. You still shouldn’t necessarily buy it if you don’t have an iPhone, but it’s definitely a better choice than the Apple AirPods.

Next up: Why is true wireless connectivity so bad?