The Logitech G935 harkens back to a previous era where the headphones were bulky and the LEDs were everywhere. Is this a classic or just dated?

Its design is a little dated, but the Logitech G935 could be just the thing if you're looking to build out your lightbright gaming setup.

Logitech’s made some of the most affordable gaming headsets on the market for a long time, but what happens when it aims for something a little more premium. The Logitech G935 is almost $100 more expensive than the company’s next highest price gaming headset. For that jump you get a pretty wide range of features, like wireless audio, surround sound, and customizable LED lights.

However, when the cheaper options do a lot of that stuff too, is a gaming headset like this worth it?

Not a lot comes strictly in the box with the Logitech G935—the headset actually stores its USB dongle in the left ear cup. Apart from that, it comes with a micro USB charging cable and a 3.5mm cord.

This design is very reminiscent of older Logitech gaming headsets like the G432 and G230.

The Logitech G935 is without a doubt a very “gamer” looking gaming headset. It’s made primarily of plastic, with large angular headphones and decorative grooves carved all over it. LED lights run along the back of the headphones, as well as through the Logitech G logo on the sides. In short: this thing is bulky and gaudy as heck—but that may be just what you’re looking for.

This isn’t a bad gaming headset though (much as it may look like one). The Logitech G935 feels sturdy. The headband sports an internal metal strip, and offers a decent amount of tension, so it always feels secure. The earpads are made of foam covered leatherette and they’re big enough that getting a decent seal is pretty easy. The pads are pretty rigid though, so people with glasses will probably have a more difficult time—even without them, it takes a little getting used to how tight the headset feels.

The panels come off, but seemingly just for storage.

The Logitech G935 features a design that implies a degree of modularity, despite a lack of replacement options. The headphone side plates are removable, revealing a storage slot for the headset’s USB dongle in the left earcup, and the battery on the right headphone. While the side plates, ear pads, and even the battery are removable: Logitech doesn’t sell replacements or alternate options for any of these. No different colored plates, no additional batteries, and no ear pads made of velour or other materials. It’s unclear why Logitech would decide to design the G935 like this—it certainly doesn’t add much aesthetic value. The storage it offers is nice enough, though.

On the subject of aesthetics, the Logitech G935 also supports Logitech’s LIGHTSYNC LED ecosystem. That means if you’ve got all kinds of LED-riddled Logitech gaming hardware, you can match their light colors easily. Of course, if you’re not interested in matching, you can also pick a color manually, picking from a near limitless range. If you don’t want a light-brite headset, you can also just turn the lights off, but then, you might want to find a different headset—a lot of options offer otherwise identical features for less money.

You can set the colors for the Logitech G logo and the strips that run along the back of the headphones separately.

Actually using the Logitech G935 is pretty straightforward, but there’s a bit of a learning curve to it. The headset features an array of buttons and switches on the left headphone, and most of them are customizable. There’s a power switch, volume dial, and mic mute button, as well as three programmable buttons—they default to cycling EQ presets, toggling surround sound, and managing LED brightness.

Remapping the buttons, using surround sound, and changing the LED color all requires using Logitech’s G Hub software. The app works well enough, but if you’re just looking for gaming features, it’s a lot of steps just to be able to use surround sound. Unlike with the Logitech G Pro X, there’s no support for Blue Vo!ce, so you’ve got very little control over the microphone. There’s an option to create your own EQ profiles, but it’s pretty clunky, and the changes aren’t super noticeable.

The headset’s plenty comfortable, if a little bit stiff.

The headset’s microphone is connected and flips up into the left headphone, which also mutes it. Using the mic is pretty straightforward, it’s got a flexible extending tip, so finding the right position is pretty easy, and it works as well as any other gaming headset with calling apps like Discord or Zoom.

How does the Logitech G935 connect?

Logitech doesn’t advertise compatibility with home consoles, but rest assured: you can get wireless audio on the PlayStation 4 and Nintendo Switch.

This is a wireless gaming headset, and like just about every product in that category, it uses a 2.4GHz wireless USB dongle to connect with your platform of choice. While it’s marketed primarily as a PC gaming headset, we found it works wirelessly without issue on the Playstation 4 and docked Nintendo Switch too—Xbox One gamers will have to use the included 3.5mm cord to play.

Gaming with the Logitech G935

If you’re a dummy like me, you can get all your light-up Logitech gaming junk to color coordinate very easily.

The Logitech G935 offers a pretty solid gaming experience, all things considered. It handled playing games like Overwatch, Risk of Rain 2, and League of Legends on PC with aplomb. The headset features DTS:X 2.0 surround sound through the G Hub app, and it provided decently accurate directional audio during matches of Overwatch. The G Hub app also allows for the adjusting the volume of different directions, which is great if you’re playing a battle royale game like Fortnite or PUBG and want to make sounds that happen behind you louder.

Playing console games isn’t quite as good an experience, as the G Hub features (including surround sound) aren’t available, but the headset games that only need stereo sound very well. The dulcet, laid-back tones of the Animal Crossing: New Horizons soundtrack sounded great, as did the classic electronic theme of Tetris 99 on Nintendo Switch. Unfortunately, the Switch still doesn’t support gaming headset microphones for most games, so you’re out of luck if what you want to play is tied into its draconian app chat system. Games like Dauntless, Warframe, and Fortnite will all work just fine, though.

How does the Logitech G935 sound? 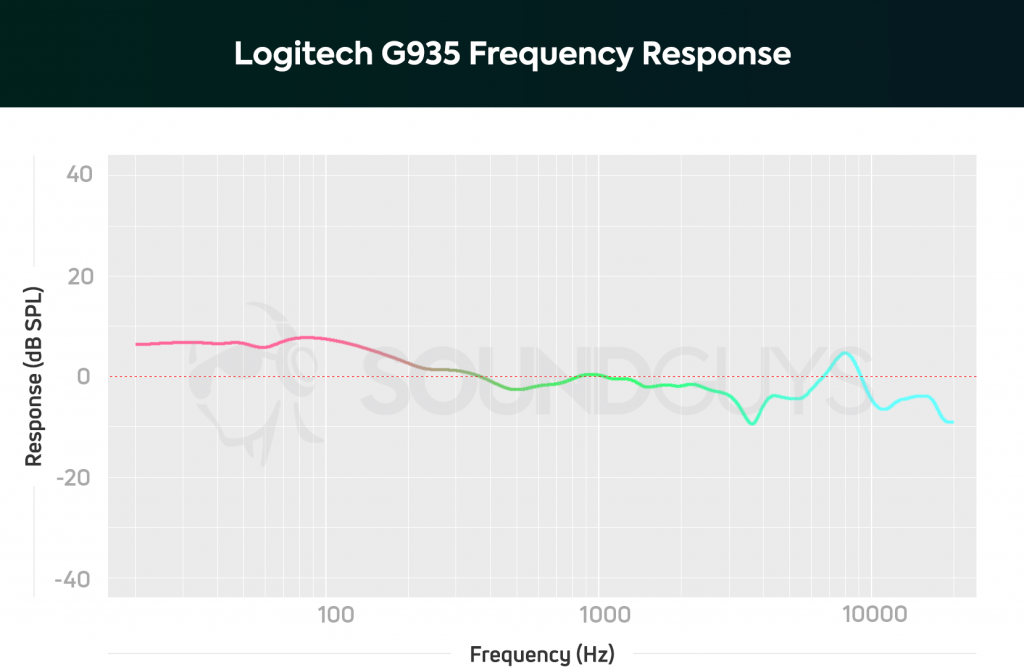 Over-emphasized bass like this is common in gaming headsets.

The Logitech G935 offers pretty accurate audio for a gaming headset. There’s a notable over-emphasis in the bass range, and some slight de-emphasis in the high range, but nothing too far out of whack.

In music, a frequency response like this means the Logitech G935 can struggle to accurately play really bassy music in a pleasant way. In “out of sight” by Run the Jewels, the bass line that drives the song sounds loud and intense, and while it’s awesome, it also drowns out the sounds of the hi hats. De-emphasis in the high range can make those kinds of sounds harder to hear, especially when bass sound is boosted like it here.

In games, this kind of audio output should do just fine with most genres and sound profiles. However, you might struggle a little in games like Fortnite, where hearing subtler directional cues like the sounds of enemy footsteps and distant gunfire can be a big benefit—overemphasized bass can make the sounds of explosions and gunfire louder than they’re supposed to be and more likely to drown out quieter sounds. The headphone pads are pretty stiff, so expect isolation to suffer if you wear glasses.

There’s nothing approaching active noise cancelling here, but the Logitech G935’s isolation acquits itself well. Thanks to the big and thick ear pads, you shouldn’t have any issue with the typical distractions of the home. Don’t expect to block out conversations happening next to you, but the whirr of a fridge or traffic noise out a window shouldn’t trouble you much. The headset’s microphone is arguably its most lackluster feature.

The microphone of the Logitech G935 is pretty much bog standard for a gaming headset. Unlike many 3.5mm options, there aren’t any overall volume issues, but there’s the typical steep de-emphasis in the bass range, and slight over emphasis in the high range.

The boost in the highs can actually be a good thing, making sibilant sounds (F, S, and SH sounds) come through more clearly, which is important for natural-sounding speech over calls. The under emphasis in the bass range is considerably less desirable. If you have a deeper voice expect to sound pretty tinny—people with higher voices shouldn’t have much issue. Listen for yourself:

Should you buy the Logitech G935?

If you’re already dialed into the Logitech LIGHTSYNC platform, maybe.

The hinges swivel to let the headset lay mostly flat.

The Logitech G935 isn’t a bad gaming headset by any means—it just seems a little dated. The bulky design, rigid earpads, and comparatively paltry battery life all conjure comparisons to an older generation of headsets, like the Logitech G432 or the Razer Nari. There’s nothing inherently wrong with buying it, but newer headsets offer all the same features and more with subtler designs and for lower prices.

The SteelSeries Arctis 7 or the HyperX Cloud Flight S both offer everything the G935 does for almost the same price, plus they’re more comfortable and have better battery life. If you don’t need a wireless headset, the Logitech G Pro X offers quite a bit more software features, as well as a sturdier, more comfortable build—it’s also cheaper. Wireless gaming headsets like the SteelSeries Arctis 1 Wireless or even the Corsair Void RGB Elite Wireless are also cheaper and offer basically the same features.

There are plenty of more expensive gaming headsets, less impressive gaming headsets than the Logitech G935 (looking at you, Astro). However, this headset sits at a strange and uneasy point in the market where it’s both just a tiny bit too expensive and a tiny bit lackluster—there are higher value options on both sides of the price spectrum.