Logitech introduces a new look with a new line of headsets, pairing a dash of color with a serious swath of features. Can it keep up with the competition?

If you're looking for a wireless gaming headset for PC, very few perform as well as the Logitech G733, and fewer still are as comfortable. The isolation leaves a little to be desired, but homebound users will find a lot to love.

Logitech has put some great gaming headsets out over the years, but a lot of the company’s more colorful plastic headsets have been in need of an update for a long time. The Logitech G430 was a great gaming headset when it first came out—in 2013—but standards have changed quite a bit since then. Logitech addresses these industry changes with the Logitech G733 Lightspeed.

Does this new lightweight wireless gaming headset modernize Logitech’s simpler offerings, or is it just one more piece of plastic for the pile?

Who is the Logitech G733 Lightspeed for?

The headset comes in lilac, blue, black, and white.

From the get-go, everything about the Logitech G733 Lightspeed screams gaming headset. This is a brightly colored, all-plastic device, with a clashing headband strap, colored LED lightstrips, and some rather odd angles. Basically, on a list of hallmarks, this checks every box, but that’s not necessarily a bad thing.

There’s a restraint to the Logitech G733 Lightspeed’s design that makes a lot of these elements actually pretty nice. The plastic is flexible, but there are very few points of movement or tension, so it feels sturdy. The LEDs are bright, but there aren’t many (they only occupy narrow strips on the front of the headphones). As garish as the G733 Lightspeed is, it’s also very comfortable.

At just 285g, this is a seriously lightweight gaming headset.

The headset’s suspension band gives the fit a lightweight feel, and requires very little adjustment. Its ear pads are made of mesh fabric, which breath nicely and keep heat buildup to a minimum. Taken together, these aspects make the Logitech G733 Lightspeed really comfortable, especially over long durations, though they don’t do much for establishing a decent seal.

Actually using the Logitech G733 Lightspeed is pretty easy. This is a wireless gaming headset built primarily for the PC, but also compatible with consoles like the PlayStation 4 and Nintendo Switch (when docked). Like most gaming headsets of its kind, the Logitech G733 Lightspeed connects using a USB RF dongle, and while there’s no wired option, it’s pretty much a plug and play affair.

Learn more: How to connect your gaming headset

The headset also supports Logitech’s G Hub app, and it’s probably a good idea to install it (more on that in a bit), but you don’t need it for basic functionality. On the left headphone there’s a power button, volume dial, and a button to mute the detachable microphone.

Is Logitech G HUB any good?

The Blue Vo!ce mic options make this great for voice calls, and activities like Dungeons and Dragons on the internet.

Logitech G Hub is typically a pretty run-of-the-mill app, offering EQ settings, customization options for the headset’s colored LEDs, and surround sound support, but with the G733 Lightspeed, it also offers Blue Vo!ce. With that inclusion, the Logitech G733 Lightspeed joins the Logitech G Pro X in being one of the few gaming headsets to offer a software experience that actually improves the headset.

Initially developed by Logitech-owned Blue for its Yeti mic, Blue Vo!ce is a suite of microphone software options. Turning it on dramatically improves mic output, and allows you to customize your mic audio with an impressive degree of granularity. There are preset mic profiles, like AM Radio and FM Radio, as well as different broadcast options and profiles for low and high voices. You can also set your own custom profile, and adjust everything from the EQ to options like noise reduction, compression, filtering and gating, and more. It’s a really comprehensive suite of options, and perfect for anyone who really values dialing in exactly how they sound on a call.

Logitech claims the G733 Lightspeed can last up to 29 hours on a single charge with the LEDs turned off. In our testing we found the headset lasted 28 hours, 26 minutes on a single charge at a consistent output of 75dB—so pretty well in line with what’s advertised. If you generally keep the volume lower than that, you may do even better, just know the LEDs require a lot of power. Expect a few hours less of battery life if you want to keep the lights on—still nothing to sneeze at.

How is gaming with the Logitech G733 Lightspeed?

This is a pretty PC-centric gaming headset, but it also works on PlayStation 4 and Nintendo Switch when docked.

The Logitech G733 Lightspeed offers a great gaming experience, all things considered. Getting it set up is easy, and it’s super comfortable. Even after long, multi-hour sessions playing games like Spellbreak and Final Fantasy XIV on PC heat buildup and headband pressure aren’t an issue.

The headset also offers DTS:X 2.0 virtual surround sound through G Hub on PC, and it works as well as most virtual surround standards. Directional cues in matches of Overwatch come through clearly, and you shouldn’t have any trouble with figuring out the direction of gunfire and explosions in games like Fortnite or Valorant.

How does the Logitech G733 Lightspeed sound? 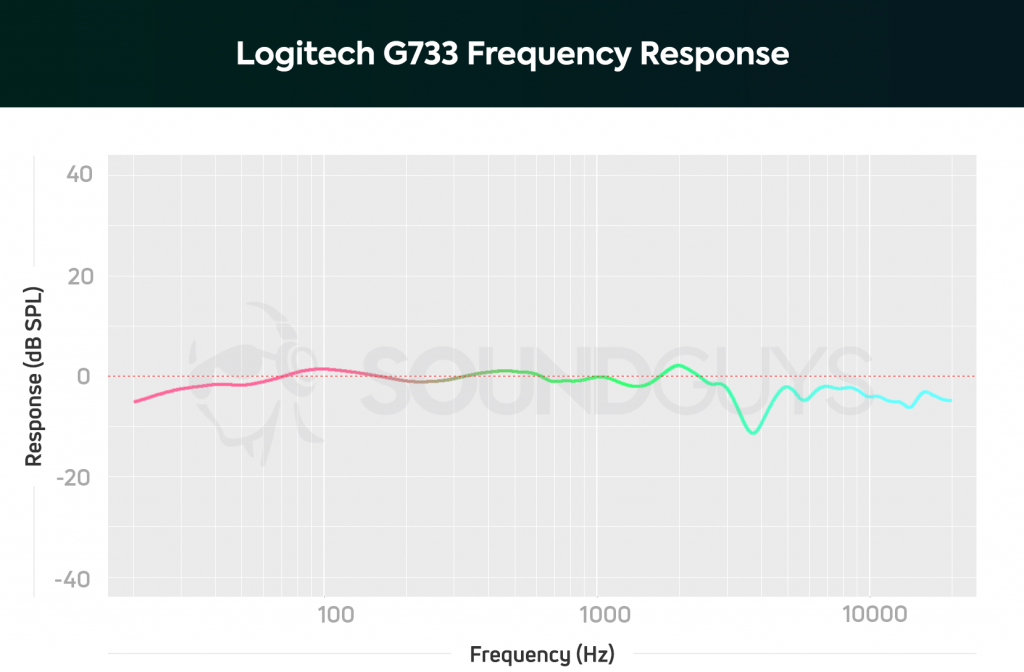 The Logitech G733 Lightspeed has very accurate sound output pretty much across the frequency spectrum. There’s a slight dip around 4kHz, but that’s more to avoid natural resonances in the ear than anything else. Basically, you shouldn’t have any trouble with distorted audio or auditory masking when using this headset.

For listening to music, a sound signature like this is great for pretty much any kind of music. The accurate bass output means genres like EDM should sound great, without the risk of unduly drowning out other sounds. In the Electric Six classic Danger! High Voltage, the shrieking guitar dominates the song, but never in such a way that it drowns any of the other instruments out. Similarly, the distorted bass feels present, but doesn’t pull too much focus.

In game, frequency response like this is great for basically any genre. You won’t have to worry about firefight sounds drowning out quieter sounds like footsteps in Valorant, and orchestral scores should come through really clearly, even when games sounds get more intense. This headset is comfortable, but it’s not going block out much.

The Logitech G733 Lightspeed’s headband offers a good deal of tension, and paired with the flexible mesh ear pads, the headset has no issue establishing a decent seal. However even with that, the material covering the ear pads and the thickness of the pads themselves mean isolation is pretty poor. This gaming headset clearly isn’t designed for outdoor use, so bad isolation isn’t a huge deal. However even a slightly noisier home might prove a little trying from time to time. 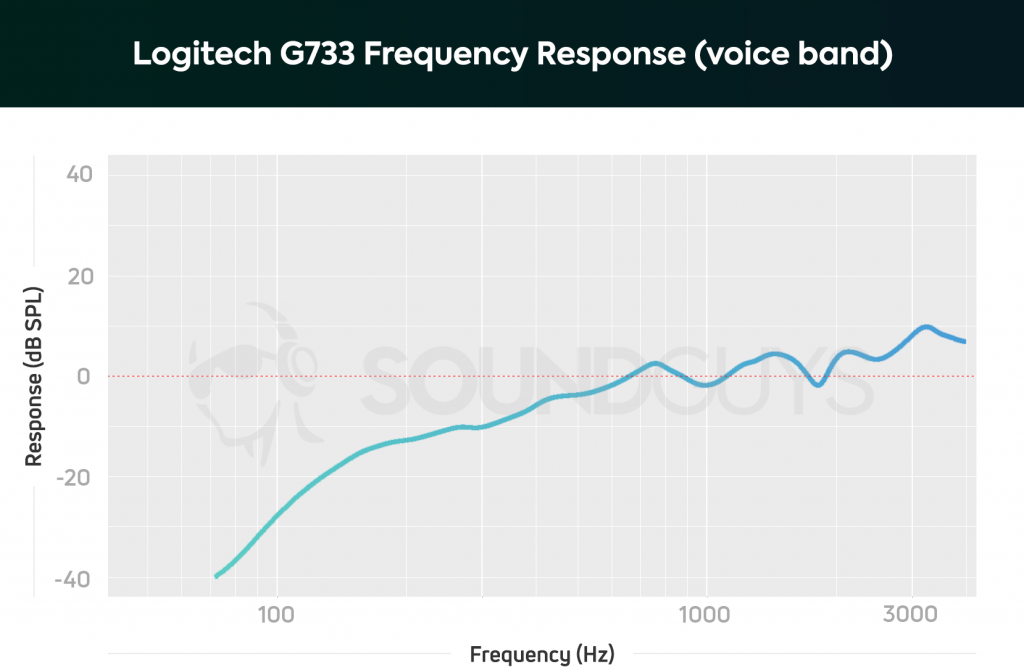 If hardware was the only factor in this mic’s performance, it’d be pretty average.

From a frequency response perspective, the Logitech G733 Lightspeed microphone is really nothing to write home about. It’s clear enough, but features a huge bass and midrange dropoff up to around 500Hz. If you’re playing on console, that’s pretty much all there is to it. If you’re on PC, G Hub and its Blue Vo!ce features can really improve things. Even before you select a preset, just turning the setting on introduces a notable bump in sound quality. Listen for yourself:

Should you buy the Logitech G733 Lightspeed?

If you want a full featured wireless gaming headset with great battery life, you should get the Logitech G733 Lightspeed.

Given its simpler physical design, the amount of functionality this headset packs in is pretty impressive.

Save for isolation, the Logitech G733 Lightspeed offers the same performance and almost identical features to Logitech’s more hardcore-oriented G Pro X, plus some of the best battery life you’ll find in a wireless gaming headset—all for the same price. If you know you won’t need to block out anything louder than idle chatter in another room, this is pretty much a slam dunk.

However, this is by no means a one-size-fits-all gaming headset. If you’re a console based gamer, something like the HyperX Cloud Flight S or SteelSeries Arctis 7 will scratch your audio itches a little more thoroughly, and for similar prices. If you want something specifically for the Xbox One, headsets like the Razer Thresher or SteelSeries Arctis 9x might be more your speed.

Logitech’s more colorful gaming headsets have been in need of an update for a long time. This new line is clearly aimed at the needs of a new generation of games and gamers, and absolutely nails what it needs to.