Picking the right Playstation 4 headset can be tricky. Here are some of our favorites.

By SteelSeries
Check Price
The Arctis Pro + GameDAC combo adds just about every feature you could want from a gaming headset, on top of great audio and comfortable fit. If you're looking for a one-stop solution that makes no compromises, this is it.
View Full Review
Best Wireless

By Beyerdynamic
Check Price
This headset is based on stellar headphones to begin with, it just comes with a boom mic. If you find yourself wanting to equalize your game sounds, this might be an easier way to deal with too much (or too little) bass.
View Full Review
Bang for your buck

By Sony
Check Price
When all you want is something simple, heading to the source is your best bet. You'll have a hard time finding a headset that works better with the Playstation 4 than this official headset. Its onboard controls and subtle microphone mean you won't need to fiddle with any software or gimmicks to get this working.
View Full Review
8.2

Trying to find the right PS4 headset can be tricky. There are so many options out there, it can be hard to tell what’s actually good, and what’s just—you know—there.

Sure, finding something good is simpler here than with a Nintendo Switch, but that doesn’t mean there aren’t a number of things to consider. Here are the best options we could find, based on our reviews, as well as research into products we haven’t gotten our hands on yet.

Editor’s note: This post was updated on March 5, 2020 with the HyperX Cloud Flight S and to reflect changes in price.

What you should know about PS4 headsets

The Playstation 4 runs into the kinds of quirks and constraints typical of a modern console. You can plug just about any 3.5mm headset into the console’s Dualshock controller it’ll work just fine. Past that, things get a little more complicated.

There’s no bluetooth audio support, so wireless headsets all need dongles. Additionally, many wired and wireless solutions require not just the use of one of the system’s USB ports, but also the optical ports on the back. This can lead to some rather odd looking wired setups that work fine, but might cause problems if they need to stretch across your living room or den.

With all that in mind, here are some of the best PS4 headsets.

The SteelSeries Arctis Pro + GameDAC almost offers too many features

If you’re looking for a PS4 headset absolutely packed with features, the SteelSeries Arctis Pro is your best bet. It’s Hi-Res certified, and offers performance to back that up. The headsets’s retractable mic is convenient and brings clear audio for in-game voice chat. Additionally, it’s extremely comfortable, with a thick ear pads made of a fabric SteelSeries calls Airweave, and a sturdy aluminum frame sporting a suspension band based after the band of a pair of ski goggles.

However, if comfort and raw audio quality were all this headset had to offer, I’d be recommending the Arctis 7, which feels exactly the same and costs considerably less. The key to really getting the most out of the Arctis Pro is its GameDAC unit. This little console acts as an intermediary between the PS4 and the headset, and it lets you control your experience in a number of ways. Whether you want to go deep and tweak the headset’s EQ and sound profiles, or you just want to change the colors of the lights on the headphones, the DAC’s got you covered. It’s compact, easy to use, and adds a ton of extra features.

The Arctis Pro takes a little work to set up on a Playstation 4. The GameDAC (which the headset connects to) needs to plug into the console itself, rather than the controller, and there are a couple boxes that need ticking in the console’s settings menu. However, once you’re all set up, prepare for great sound and more features than you can shake a thumbstick at.

The HyperX Cloud Flight S has the remarkable distinction of being one of the only PS4 headsets around to offer surround sound —when the field narrows to wireless headsets, it’s one of maybe two. However, if that was the only thing this headset had going for it, it probably wouldn’t be worth considering. 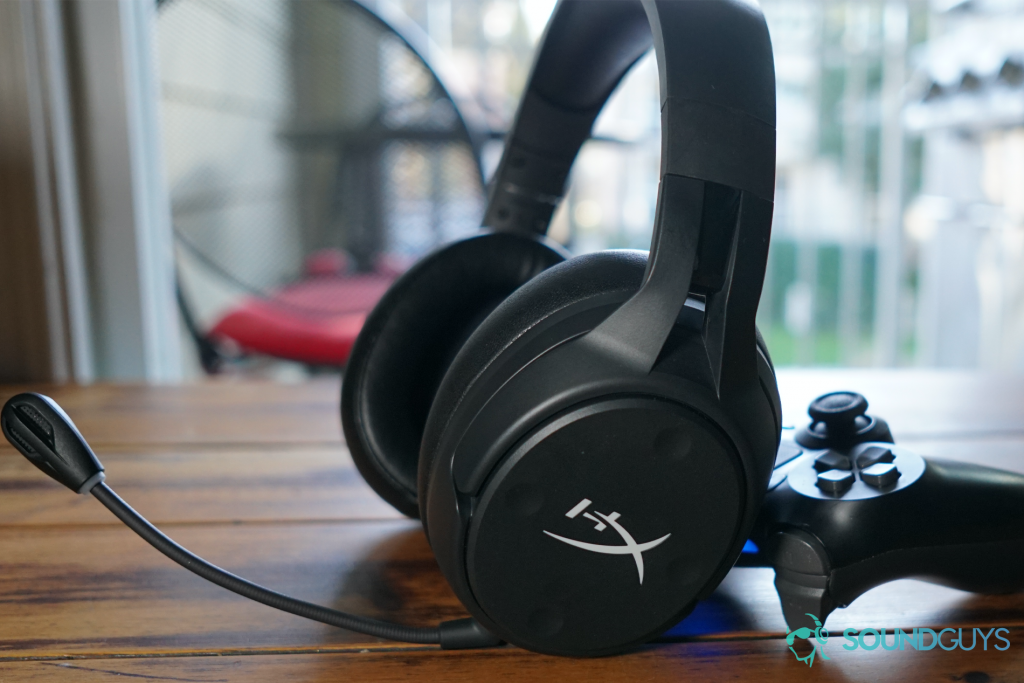 This gaming headset is built to be the convenient option for switching back and forth between the PC and Playstation 4, and as such, most of its features work well on both. It’s got solid, if a little bass-heavy sound, a decent detachable microphone, and best-in-class over 35 hour battery life. Wireless audio is achieved using a 2.4GHz RF wireless USB dongle, and it’s pretty much a plug and play affair. On top of all that, this the first gaming headset to support Qi wireless charging, so you can place it on top of any compatible charging pad you’ve got. HyperX makes a charging pad to go with this, but sells it separately, which is a shame.

The headsets rather considerable amount of options are all controlled by buttons and switches, including the surround sound function. It’s a little tricky to keep all the different controls straight, but once you do there’s a lot you can control on the fly, including the usual volume and mic mute options, as well as affecting game/chat and a few other things. Despite all these extra controls, the HyperX Cloud Flight S still maintains a straightforward and comfortable design.

The Beyerdynamic Custom Game has bass for days 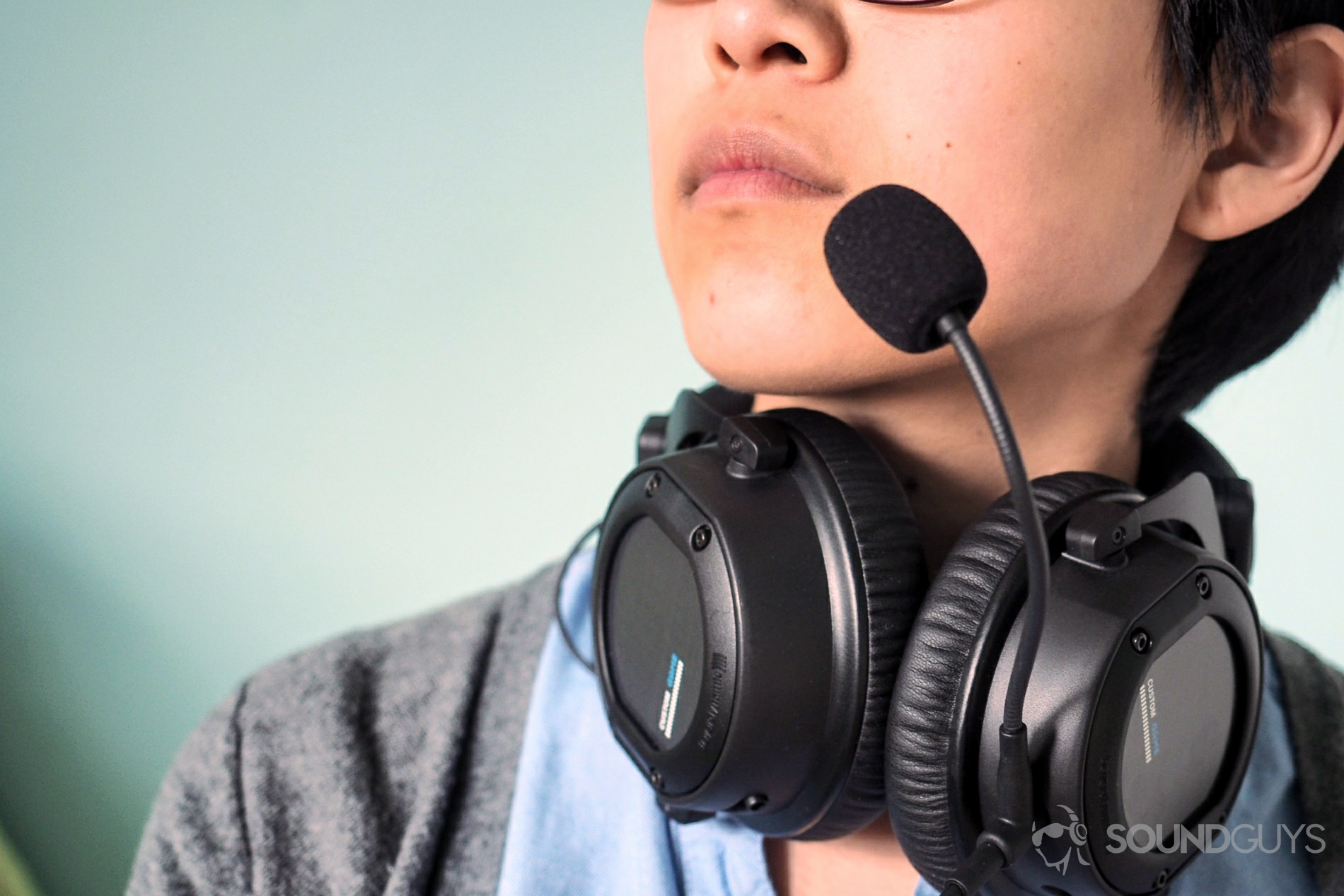 The Beyerdynamic Custom Game is a behemoth of a gaming headset, but it lets gamers customize its bass in a pretty unique way. Each ear cup has bass reflex vents, which are easily revealed or concealed with a simple sliding mechanism. Adjusting the bass reproduction also adjusts the influx of ambient noise that can permeate the headphones. In a quiet environment? Open up those bass vents and experience a boomier sound. For tournaments with plenty of chatter, just close the ports to drown everything out. 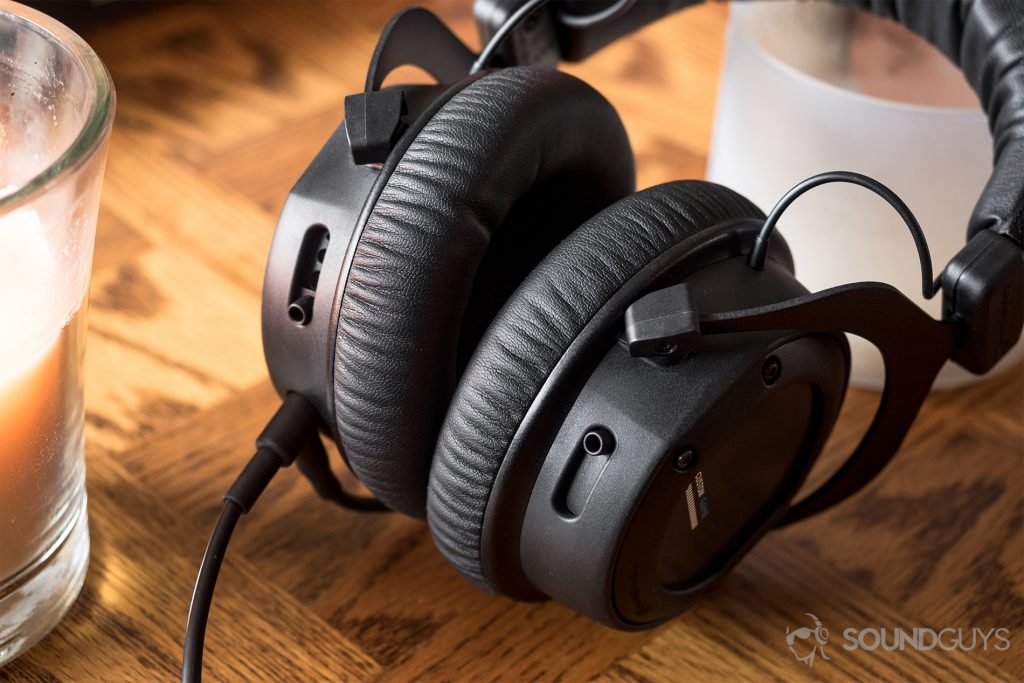 The cardioid boom microphone is forgiving when it comes to placement and hones in on your voice while simultaneously filtering out extraneous background noise. If customization is your thing, well, you’re in luck. The Custom Game headset includes interchangeable ear cup plates to non-verbally convey your style. If you’re not a fan of the all-black aesthetic, Beyerdynamic also has a bunch of customization options, as well as velour pads for people who wear glasses on their raids.

Because this is a 3.5mm headset, and a lot of its appeal is hardware-based, it’s just as good as a PS4 headset as on PC.

Sometimes you want something simple that just works, and given how console peripherals are always a little wonky, where better to go than the source. The Playstation Gold Wireless headset offers straightforward connectivity with its USB dongle and performance backed by Sony. 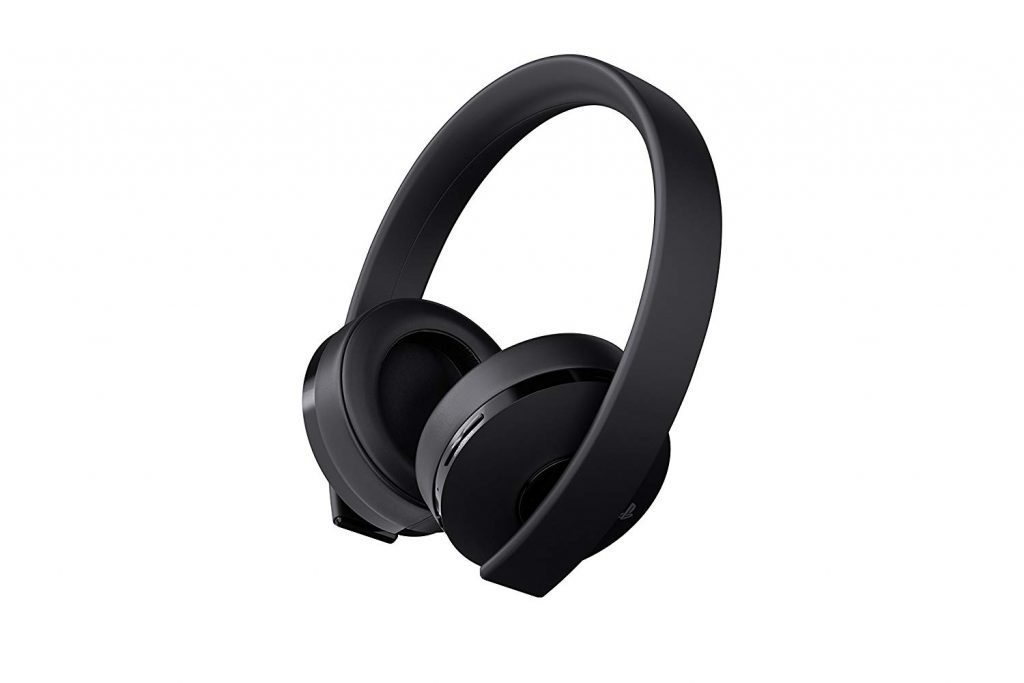 This sleek PS4 headset supports virtual 7.1 surround sound and can connect to the Playstation 4, Playstation 3, Playstation Vita (!), and PC without issue (though Vita and PC only support stereo sound). It comes with both a wired 3.5mm cable and a USB dongle for connecting to devices, so you shouldn’t have any compatibility options, even when the battery runs out—in our review, we found it lasted just over eight hours.

It might not look like it, but the headset also has a mic embedded into left earphone, so you can chat to your heart’s content, though you’ll sound a lot like you’re talking in a tin can using it. 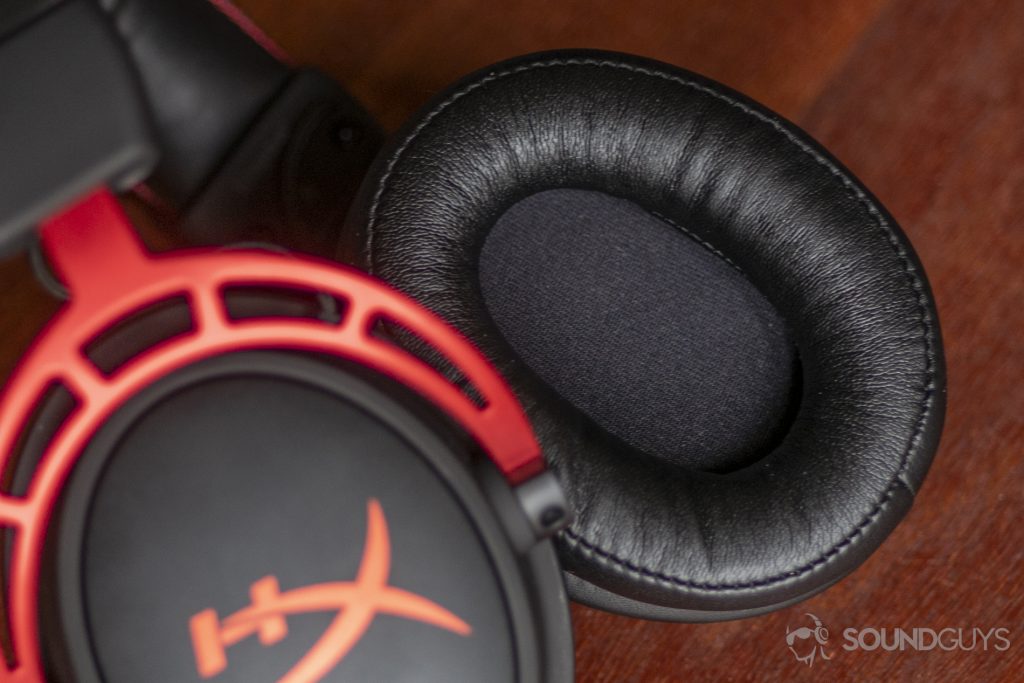 This is a no-frills device for gamers who want something simple that gets the job done with aplomb. It doesn’t offer the breadth of features many gaming headsets have, but rock solid performance like this is really what you should be aiming for anyway. Surround sound can be nice to have, but it’s hardly going to make you better at a game. Some games like Overwatch will even add it in for you. All you need to do is plug the Cloud Alpha into the Dualshock 4’s 3.5mm jack and you’re good to go.

The attached microphone is a little wonky, with underemphasized bass that can make deeper voices sound a little tinny. However, you really shouldn’t run into any clarity issues while chatting.

The headset was clearly designed with comfort and durability in mind. With a solid metal frame, thick plastic headphones, and deep leatherette pads make for a headset that feels fantastic. The inline controls add an extra degree of convenience, too.

There are lots of great PS4 headsets out there, and many of the ones we picked come from product lines full of similar offerings. The reason why we picked what we picked comes down to personal judgement. A lot of these products are very similar, and sometimes the features more expensive versions add just don’t really mean all that much, in our experience.

Razer’s Thresher line is a great example of this. For only a little more money, you could get the Thresher 7.1, which adds surround sound support. We opted for the cheaper model, because these headsets feel the same to use, and surround sound on average just doesn’t matter all that much. With the exception of games in the first person shooter genre and the like, the utility and immersion of surround sound (however you want to quantify that) really don’t differ much from stereo sound. The addition of features like the Thresher Ultimate‘s RF wireless hub similarly just didn’t seem to justify the added cost. 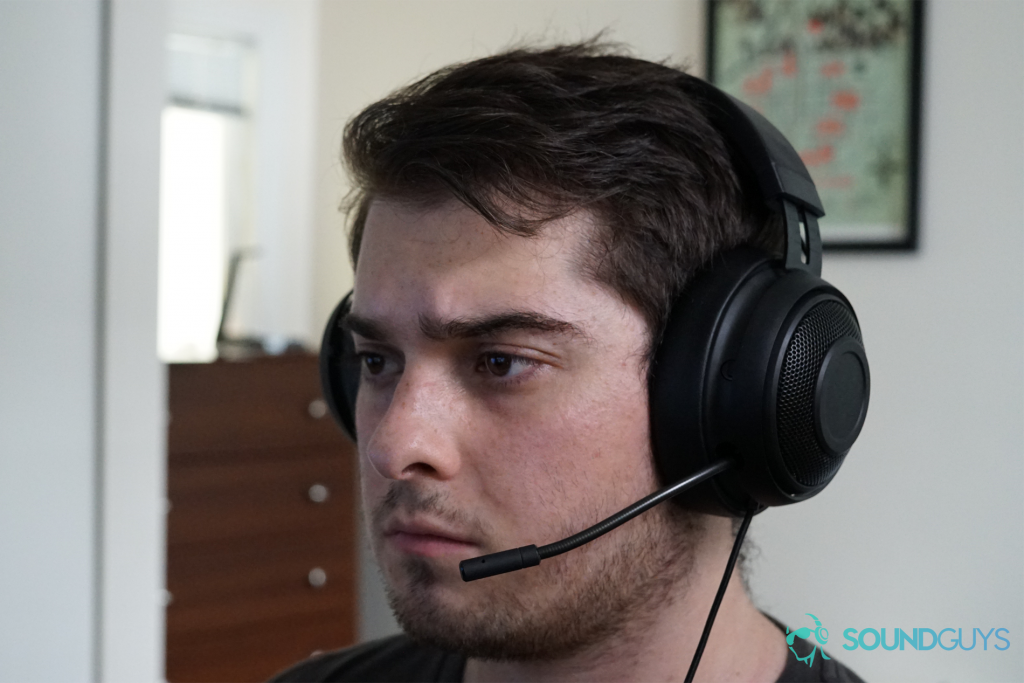 However, while generally we favor cheaper options, sometimes the more expensive stuff actually makes a lot of improvements, like the SteelSeries Arctis Pro + GameDAC. The headset looks and feels extremely similar to other SteelSeries headsets, like the Arctis 7 among others, but the addition of the DAC unit adds a degree of functionality and convenience that really completes the package.

It never hurts to shop around a bit, though. If a PS4 headset we’ve listed here sounds almost perfect, there might be a version with that one extra feature you’re looking for.