Budget-conscious gamers and people whose phones still have headphone jacks should pay attention to the JBL's gaming earbuds.

The JBL Quantum 50 is a very cheap, very good pair of wired earbuds for listening to music and gaming. If you have something with a headphone jack and urge to use it, this won't let you down, though the cord is a little short for PC gaming.

Big gaming headsets with flashing LED lights and tons of features may be all the rage, but if you’re in the market for something small, portable, and versatile, there aren’t many options. So many devices have dropped the headphone jack that decent wired earbuds are a little hard to come by—that’s where the JBL Quantum 50 steps in.

These wired earbuds are reasonably priced and work everywhere. Is that enough to make them worth it?

Who should get the JBL Quantum 50?

This set of wired earbuds is a fantastic portable option for mobile gamers.

The shape of the earbuds makes them very comfortable.

Regardless of how familiar you are with this product in particular, if you’ve used a pair of wired earbuds, the JBL Quantum 50 will feel pretty familiar. These are 3.5mm wired earbuds—you plug them into a headphone jack and they just work. There’s no setup, no software, and no fuss.

However, all that isn’t to say this is an anonymous product—it actually has a handful of nice touches to set it apart. The JBL Quantum 50 sports a braided cable (at least until the cord splits for each earbud), with an in-line control unit and in-line microphone. The earbuds feature unique tips with two distinct parts—there’s the typical silicone ear tip (with small, medium, and large options), as well as a rubberized disc meant to grip your concha. The soft-touch discs will be familiar to anyone who’s used the JBL Endurance Peak 2, or any other earphones from the JBL Endurance family. It’s very comfortable and makes it easy to get a good, consistent seal. 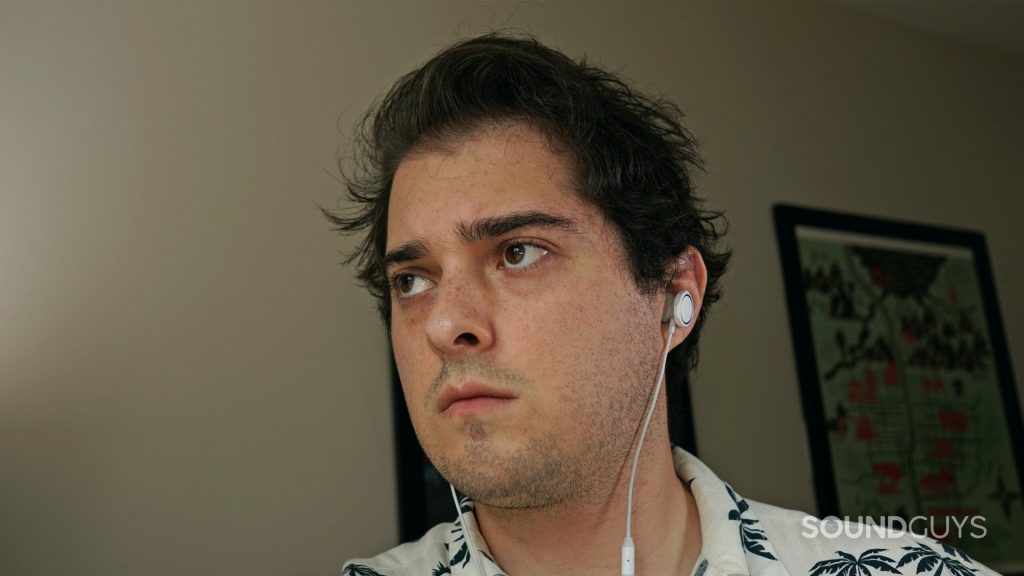 The unique ear tips spread the weight around, which avoids strain even after hours.

On top of being comfortable, the Quantum 50 is also very easy to use. Again, there’s no software here, so set up is as simple as plugging in. The earbuds’ in-line control unit reduces the need to reach for your phone every time you want to change something.

The control module sports a volume slider, a mic mute switch, and a multi-function button. You can use the usual single, double, and triple taps to control play/pause, skipping forward, and skip back, respectively. This button also offers call controls, a single press for answer, a double press for swapping between held calls, and a triple press for hanging up. When you hold the button for five seconds it prompts my Google Pixel 4a to tell me the time; though, that’s not an advertised feature and may have more to do with Google Assistant than with the earbuds.

How is gaming with the JBL Quantum 50? 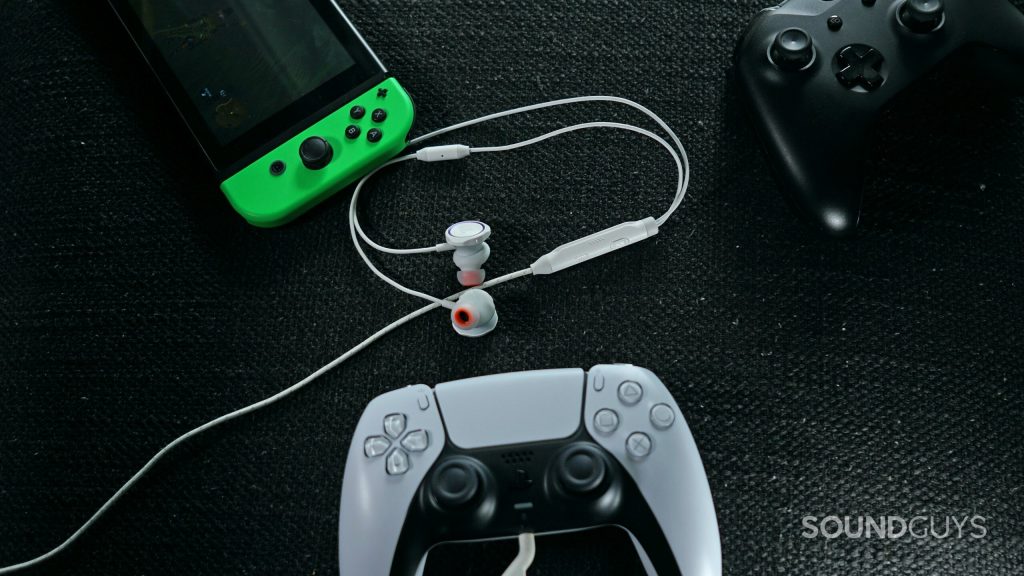 The JBL Quantum 50 offers a great gaming experience for pretty much anyone other than desktop PC gamers. The earbuds are very comfortable, even for long gaming sessions, however, the cord may be a little short if you have to stretch it across a desk.

The Quantum 50 doesn’t feature anything like virtual surround sound, but it supports the built-in standards that each major gaming platform offers—just don’t expect an especially strong effect. Most spatial audio features are tuned for over-ear headphones, so game audio may be a little hard to distinguish from regular stereo at times.

However, the JBL Quantum 50 is still more than capable of handling whatever a game throws at it. The explosions, gunfire, and score of Uncharted 4: A Thief’s End on a PlayStation 5 all come through clearly and distinctly. Similarly, the stereo experience of Apex Legends on PC sounds great, again provided you’ve got a setup where the earbuds can comfortably reach you.

How does the JBL Quantum 50 sound?

Bass sounds up to 200Hz will be a little loud and might mask some vocals, particularly female vocals.

The JBL Quantum 50 sounds accurate for a gaming headset. Compared to our target curve, there’s slightly more emphasis on low-end sound, but it still sounds pretty pleasant. It’s pretty uncommon among gaming audio products to hew this close to our curve, so anyone who’s used to a more consumer-oriented sound profile will probably enjoy this.

Music of all kinds should sound pretty nice coming through the JBL Quantum 50. The amplified low-end response means the sounds of instruments like kick drums and bass guitar should come through with a little added oomph. In Running Away by Vano 3000, BADBADNOTGOOD, and Samuel T. Herring, the distorted instrumentals come through loud and clear. The bass drum is especially prominent, which can make things like the bass guitar a little hard to pick out at times, but only slightly.

The JBL Quantum 50 features solid isolation performance for a pair of earbuds. Finding the right size ear tip is necessary for establishing a seal, but once you do, the earbuds should successfully quiet most background noise. This doesn’t compete with options that offer active noise cancelling, but it’s good enough. You can take this for a walk or into a cafe with ease—especially given how low-profile it is compared to most gaming headsets.

Can you use the JBL Quantum 50 for phone calls? The microphone sits higher up on the chord, hanging a little closer to your mouth.

While the JBL Quantum 50 sounds great, its microphone is more on the average side. There’s nothing especially wrong with how it sounds, but it features the same slightly muffled and slightly quiet audio many have come to expect from earbuds of most kinds. It’s fine for phone calls, but don’t expect crystal clear game chat. The microphone module is separate from the control unit, so you shouldn’t feel the need to hold it up to your mouth like a lot of wired earbud microphones.

Should you buy the JBL Quantum 50?

If you’re looking for a positively cheap, reliable option for gaming audio, you should consider the JBL Quantum 50. 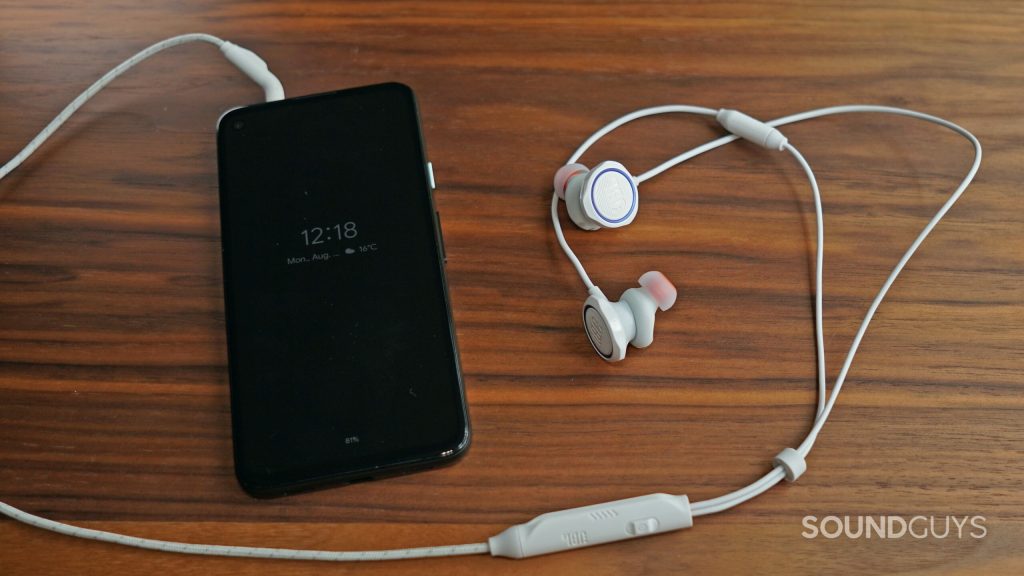 It’s pretty nice having earbuds I don’t need to recharge the earbuds.

At $29.99 USD, it’s hard to imagine finding a better deal than the Quantum 50. These earbuds sound great, they’re comfortable, and they offer good isolation. If you’re looking for something you can use for gaming or out and about, this is probably one of the better in-ear options on the market.

The cord is a little on the short side for some desktop PC setups, and the microphone is pretty average, but those are small tradeoffs to make for such a reasonably priced package.

JBL Quantum 50
All prices listed in USD unless otherwise specified. Prices may change over time, and vary by region. Unfortunately, we cannot list Amazon prices on the site, as they vary greatly by currency.

What should you get instead of the Quantum 50?

If you’re not sold on the JBL Quantum 50, maybe you’ll like the Razer Hammerhead Duo wired earbuds. Razer’s earbuds come in a few editions (Nintendo Switch, Console, and Standard). The Nintendo Switch model only comes in black/silver and the microphone and mute toggle are guaranteed to work on the Swtich. The Standard model has volume control buttons and a multifunction button for virtual assistant access.

Alternatively, an over-ear gaming headset might be more suited to your needs. They can run for a lot more money, but PC gamers especially will appreciate the longer cord and better microphone—console controllers include sound cards that clean up microphone audio, after all.

The Turtle Beach Recon 70 and the Razer Kraken X offer considerably better microphone experiences, and longer cords for PC gamers, for $10 USD and $20 USD more, respectively. That may seem like a bit of a price jump, given the low starting point, but that’s just an indicator of how cheap the Quantum 50 is—these are still very reasonably priced options.

You can use a 3.5mm connection with the Barracuda X if your smartphone still has a headphone jack.

There are plenty of great gaming headsets around $100 USD too, and they all offer superior experiences in one way or another. The HyperX Cloud Alpha is a perennial workhorse, with a more neutral frequency response and super comfortable build. The Razer Barracuda X brings a wireless USB-C dongle too, which means it can almost match the breadth of the Quantum 50’s compatibility.

However, these are considerably more expensive. And if you’re really set on earbuds, you still may be better off with the JBL Quantum 50.