Not very portable
No extra features

If you're looking for a gaming headset, the HyperX Cloud Alpha is a community favorite—for good reason. The combination of great sound and excellent durability make for a killer combination.

If you’re in the world of PC gaming, there’s a relatively high chance you’ve seen people talking about the HyperX Cloud Alpha on forums or other sites. That’s for good reason: it’s a rockstar of a headset under $100. But how good is it?

Editor’s note: this review was updated on April 3, 2020 to address developments in the gaming headset industry.

Who is the HyperX Cloud Alpha for? At home in front of a PC or console, the HyperX Cloud Alpha is the no-frills champion of the sub-$100 bracket.

What is the HyperX Cloud Alpha like to use?

In short, the HyperX Cloud Alpha was designed from the very beginning with durability and comfort in mind. The band and forks are solid metal, and each movable part of the headset is protected by robust joints, or thick padding. The earcups themselves are made of a thick plastic encircling a metal backing, and they use a super thick ear pad to seal to your head.

From the moment you take it out of the box, to the moment you hurl it across the room after your squadmates screw up for the thousandth time, the HyperX Cloud Alpha is probably one of the most durable headsets on the market. If you somehow damage the cables or microphone, both can be removed from the headset and replaced for a pittance instead of having to replace the whole unit. While I sound like a broken record saying it, being able to fix your headset is the most important durability feature to have. A super-thick band padding helps distribute the weight of the HyperX Cloud Alpha quite well.

When you start using the HyperX Cloud Alpha, you’ll notice that it creates a very good seal against your head after adjusting the band, which is important for two reasons:

It’s a given that you want solid isolation if you’re a gamer or work at home while the world around you is pretty loud, but ear pads this deep and soft are an unfortunate rarity. I wish more headphones followed this example, because it would do wonders for ears of all sizes. About one third of the way down the included cable is a remote that houses a microphone mute switch, and a volume wheel. It’s definitely convenient to be able to adjust your master volume without changing your computer’s settings when you move back and forth between programs. If you’re a parent or teen, being able to mute the mic when your family members walk in the room is also a good way to avoid the embarrassment of your Discord server hearing your home life.

How does the HyperX Cloud Alpha connect? The HyperX Cloud Alpha can connect to just about anything with a 3.5mm headphone jack. There are no fancy software bells and whistles necessary, this is just another plug-n-play headset without any complications.

How does the HyperX Cloud Alpha sound? 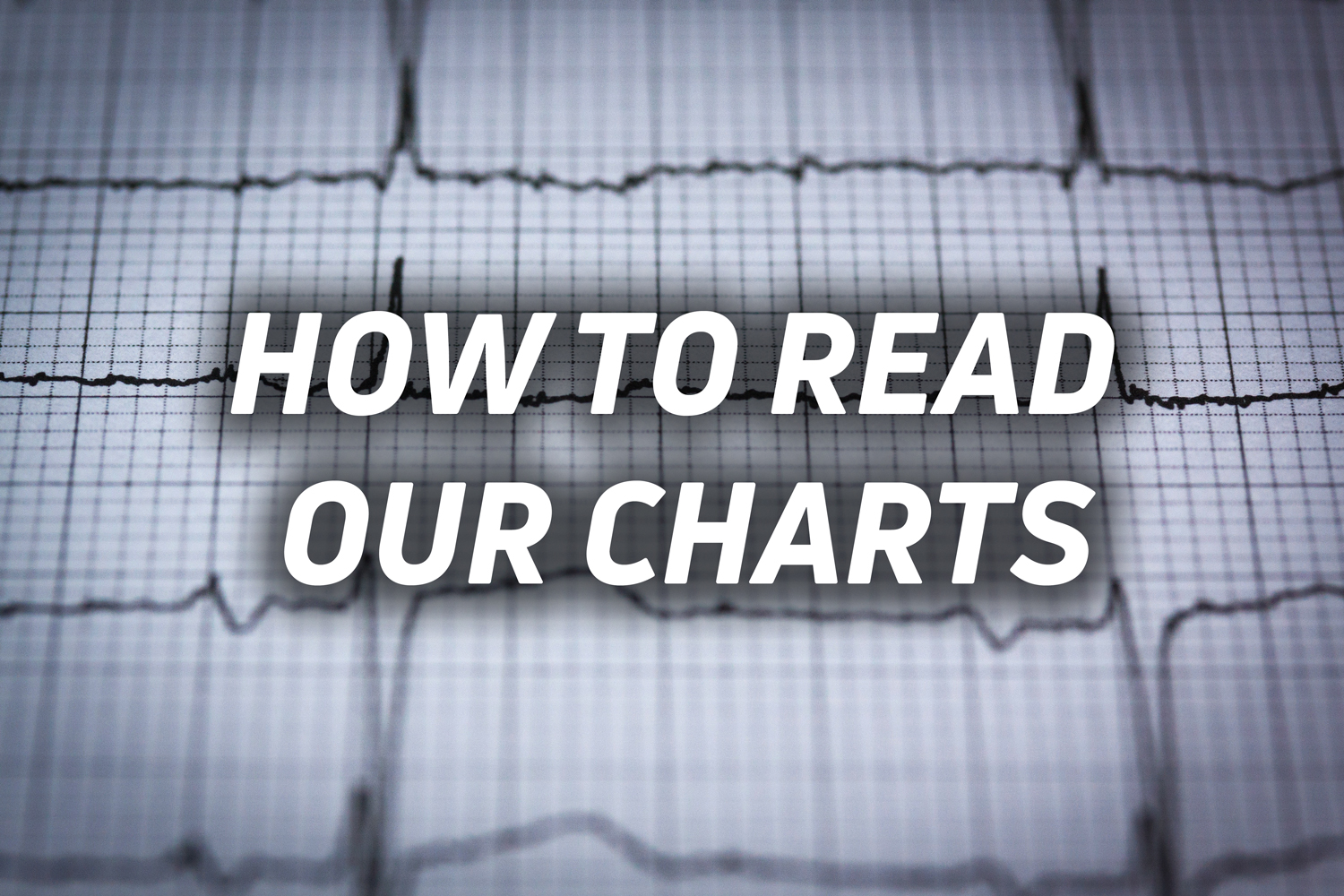 Honestly, I’ve enjoyed my time with the HyperX Cloud Alpha, and I can understand why this headset is so beloved by the online community. It sounds great, and provides really good isolation from the world around you. Sure, it’s not the highest of the high-end gaming headsets, but it offers a known quantity and it’s pretty good.

First things first, this gaming headset is incredible for blocking outside sound. That’s an enormous advantage not only because it means common household noise won’t make its way into your game (and therefore adversely affecting sound quality), but also because it means you won’t have to worry about cooking your ears prematurely. The cherry on top of a headset that isolates well is that you won’t wake anyone else up with noise leaking out of the ear cups. On more than one occasion, I used the Cloud Alpha sans microphone with my Switch with my wife sleeping soundly next to me. The in-line remote allows you to adjust volume on the fly, mute your microphone.

It won’t mute a train going by, but this is one of the best-isolating headsets we’ve tested by a country mile. To do better, you’d need active noise cancellation. 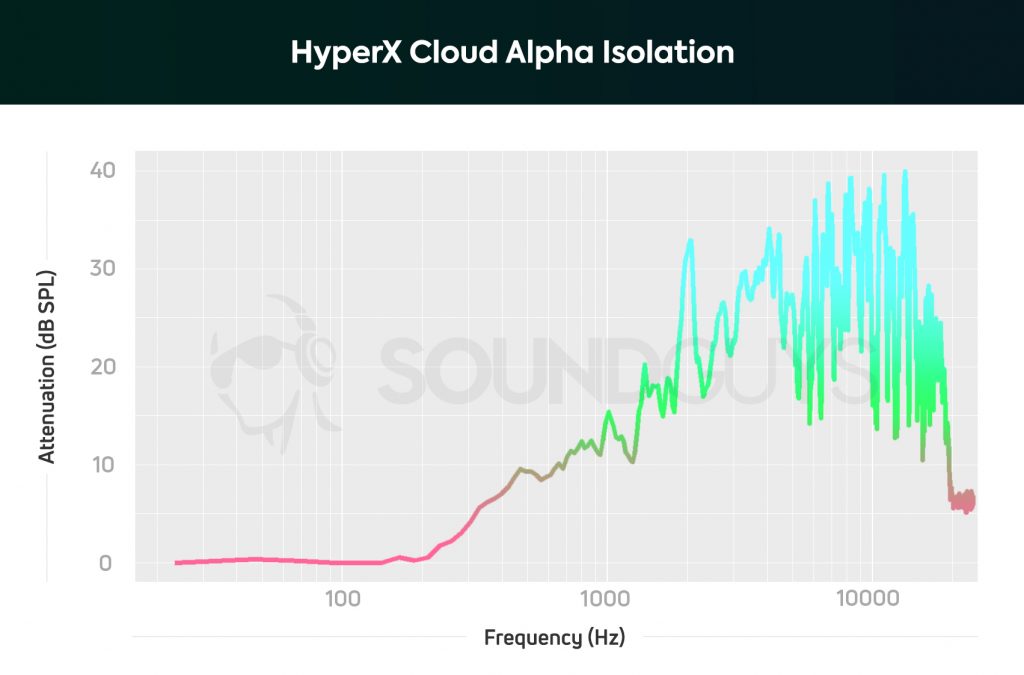 Even though it’s not a lot, the HyperX Cloud Alpha’s isolation between 200 and 1000Hz is uncommonly good for a gaming headset.

Now that we’ve established that you’re not likely to have outside interference in your tunes, let’s talk about sound quality. Because the isolation is so good, you won’t have to worry about destructive interference or auditory masking preventing you from hearing small details in music. However, the actual performance of the speaker elements in the HyperX Cloud Alpha also allow your music and games to really shine. 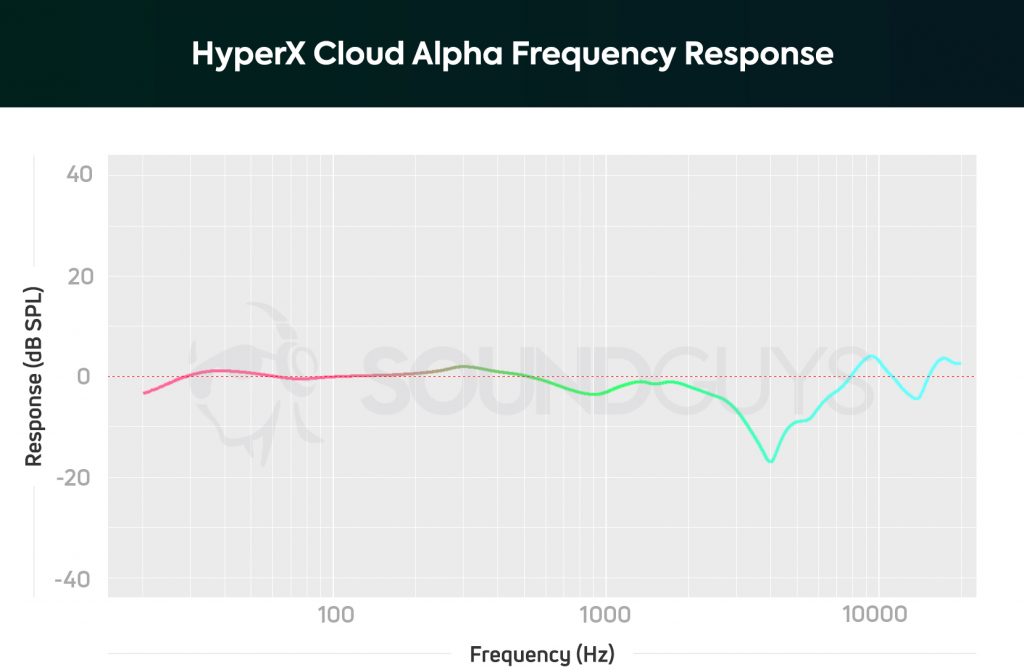 A frequency response this close to 0dB deviation is highly prized in the mixing and audiophile worlds—for good reason.

With the exception of a dip at 4kHz, the frequency response of the product doesn’t alter the signal sent by your console or computer that much, meaning the sound will be very similar to how it was originally mixed. The advantage of this kind of response is that little details won’t get lost as often, and music will sound much “clearer” than you might be used to. It’s why studio headphones will typically aim for this type of sound.

Low notes aren’t going to rattle your skull, and there won’t be a lot of boomy echoes to deal with. That may not be what you’re looking for, but this type of sound means you won’t lose quiet sounds in the low end, like heavy footsteps behind you. When you switch to music, you’ll be able to hear vocals and synths in a good balance of loudness, and you’ll be able to hear the qualities inherent to the instruments, like the distortion added to the low synth in Childish Gambino’s Sober.

The most interesting feature of the chart above is that dip at 4kHz. While it may seem out of place, it’s not an uncommon way to sidestep some issues that many consumers have with headphones. Namely, it takes the edge off of loud sibilant sounds like f, s, sh sounds, cymbals, and ringing. Additionally, some listeners experience some resonances and echoes in this range depending on their ear canals, so some manufacturers will also downplay this narrow band to avoid it.

While this is a smart way to go, you may notice some atmosphere effects in your games to sound a little off, but it’s really such a minor thing that you won’t notice it until someone points it out. You might notice it in a track like Pink Floyd’s Us and Them when the echoes of the guitar don’t last as long as they might otherwise. Like I said, super minor detail. The microphone is a little wonky, but otherwise it’s intelligently-tailored to the demands of voice chat. If you have a very deep voice, you may find that it makes you sound a bit different over voice clients like Discord. However, the vast majority of people won’t have the same problems that I had with it. You’ll notice that it slightly emphasizes notes that help people understand what you’re saying, but slightly de-emphasizes the range of fundamental notes. That’s to combat that overly-boomy sound that microphones can sometimes have when you get too close to them.

You can listen to the sample above to see what it’s like in the real world, but you’ll immediately notice it’s not quite the HyperX Quadcast or anything. If vocals are extremely important to you, I suggest using a USB mic or gaming mic in tandem with your headset instead of just this one. If you’re only using Discord: this is more than good enough.

Should you buy the HyperX Cloud Alpha?

Even if I were to offer alternatives, there’s a good reason that this is a headset that’s gotten so much attention and use from the gaming community, and that reason is quality. This is the headset you get when you’ve outgrown the best Razer options and need something built for the long haul. It doesn’t surprise us that this headset made it onto our best PC gaming headsets list with ease. Though, if you need a better mic, you want to look elsewhere. The HyperX Cloud Alpha is probably one of the most Platonically-ideal gaming headsets of late, as it offers a good mix of high durability, good sound quality, and extreme value. It might sound strange to you that I’m calling a $100 gaming headset an extreme value, but look at it this way: if you’re up all night raiding, if you spend a lot of time with headphones on your skull—you can spend hundreds or thousands of dollars chasing quality. The HyperX Cloud Alpha offers exactly that, far above its price point, so it’ll be a trusty companion for a long time.

If you’re looking for a step up, you’re probably going to want to stick with HyperX if you like the Cloud Alpha. Very similar to the Audeze Mobius, the HyperX Cloud Orbit has planar magnetic drivers, and built-in 3D sound support as well—but it’ll cost you.

Additionally, gaming headsets in the sub-$100 range are typically made of materials that are either easily broken or will decay quickly with heavy use. You can easily spend over $500 over a few years if your headsets keep breaking or getting worn down. The HyperX Cloud Alpha can be maintained with replacement parts, and is built like a tank to boot. That $100 may seem expensive up front, but it’ll probably be the smarter investment in the long run.

Is the HyperX Cloud Alpha good telephoning and video chat services like Zoom?

The HyperX Cloud Alpha will do in a pinch, but it doesn't have a very accurate or loud microphone. However, there are plenty of gaming headsets with good microphones you might like instead.

The microphone sample sounds like there's noise cancellation. Is this an artifact of the headset or your audio editor?

Our microphone samples are as close to raw as we can get it—what you hear is what it sounds like. In the case of the HyperX Cloud Alpha, HyperX claims the mic does some noise cancellation on the hardware side, which can have an impact.

Does the HyperX Cloud Alpha have 7.1 surround system?