The Razer BlackShark V2 could be one of the best gaming headsets under $100 to hit the market in years. Does it sink or swim?

The Razer BlackShark V2 is among the best gaming headsets on the market, in its price range or not. It's got better isolation than some noise cancelling headphones, more accurate sound most gaming headsets, and it's comfortable enough to wear for hours without overheating—what more could you want?

When you imagine a gaming headset, it’s hard not to think of something from Razer. The big bulky headphones, LED-riddled chassis, and jet black exterior of most of the company’s products basically codified the product category. Now, Razer’s newest gaming headset is setting itself apart by jettisoning almost all of that. The Razer BlackShark V2 features a paired-back, simple look. There are no lights, bulky headphones, or any other aesthetic flourishes at all really.

Stripped of so much flash, does the BlackShark V2 have the substance to back it up? 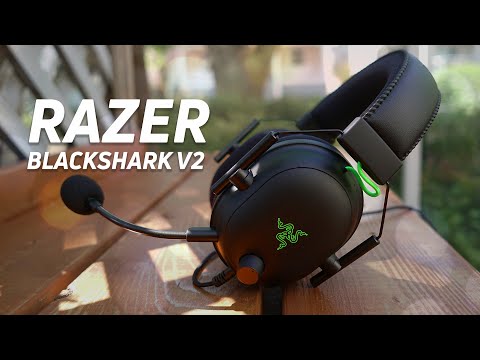 Who is the Razer BlackShark V2 for?

What is the Razer BlackShark V2 like to use?

There aren’t any random grilles or light-up logos here.

From the outset, it’s obvious the Razer BlackShark V2 is a gaming headset; from its boom mic, to the extra prominent volume dial, to the neon green accents. However, there’s a degree of aesthetic restraint here that other Razer gaming headsets lack. The headphones are smooth and not as bulky as something like, say, the Razer Kraken or Thresher—there aren’t any strange design flourishes or colored LEDs. Even the Razer logo is rather small compared to other headsets. Basically, it looks more like a regular pair of headphones than most Razer headsets.

The Razer BlackShark V2 is a primarily metal construction, with a headband covered in a soft foam cushion wrapped in a mesh fabric. The wireframe hinges don’t feel terribly sturdy, but I never ran into any issues over the course of reviewing the headset. The headphones have a pretty large tilt range, so people with wider heads shouldn’t have to worry about finding a comfortable fit. The ear pads are made of memory foam covered in layers of leatherette and mesh fabric—they’re very soft, and achieving a decent seal is extremely easy.

Thanks to the outer mesh layer, the ear pads manage heat very well.

Actually using the headset is pretty straightforward. There’s very little in the way of onboard controls, with just a volume dial and a mic mute button on the left headphone. The volume dial sticks out rather prominently from the side of the headphone, but there’s enough resistance that an accidental bump won’t change anything, and it actually feels pretty satisfying to turn—it has a built-in catch at the mid point of the knob for some reason.

The included USB soundcard is what lets you connect to Razer Synapse and access all the additional features.

This is largely a plug-and-play device. Once the USB soundcard installs its driver, you don’t really need to do anything to get it to work on PC. On consoles you need to do even less (just plug it into the 3.5mm headphone jack of the controller).

The headset’s more granular controls and additional features, like surround sound, are handled by Razer Synapse 3, the company’s universal (sort of) companion app. Synapse works well enough—the latest iteration of the app is better laid out than most gaming headset apps, but it’s still a little clunky. The software lets you customize your EQ and mic settings, and soon after launch it will include a suite of THX-tuned game profiles, to tailor your sound to games like Apex Legends, Valorant, and more (game profiles will launch August 6, 2020). These features are nice to have, but you also won’t be missing much if you skip Synapse, especially if you’re not interested in games that use surround sound.

Is the Razer BlackShark V2 good for gaming?

The mic is detachable, if you’re playing something single player, or just don’t feel like talking.

Playing games with the Razer BlackShark V2 is easy to do for long periods of time. This is a very light and comfortable gaming headset, and paired with the mesh ear pads: I never ran into any strain or heat issues—even after hours of use. The headset’s compatible in one way or another with basically every gaming platform; just ditch the USB sound card and plug into your PlayStation 4, Nintendo Switch, or Xbox One via 3.5mm.

On PC, the Razer BlackShark V2 gains access to THX Spatial Audio through Razer Synapse. While surround sound isn’t the kind of thing to really make you better at any game, it works pretty well here. Virtual surround sound standards often depend as much on the game as the headphones, but multiplayer games like Valorant, Overwatch, and the recently remastered Halo 3 all sound great with the BlackShark V2. In all of these games, picking out directional audio cues like footsteps and gunshots was easy, and I never felt like I didn’t have at least a rough sense of where a sound was coming from.

On PlayStation 4, Persona 5 Royal’s particular blend of music and game sounds come through very well, too. Everything was easy for me to pick out, even when voiceover, backing music, and combat sound effects were layered over one another.

How does the Razer BlackShark V2 sound? The Razer BlackShark V2 outputs very accurate sound for a gaming headset. The beginnings of the usual audio hallmarks are there, like over-emphasized bass and a slight de-emphasis in the 3-6KHz range. However, unlike many gaming headsets, including a large portion of Razer’s own catalog, the effect is pretty slight here.

The added emphasis to bass and highs is great for instrumental music that relies on bass guitar and drums, as well as subtler high range sounds like strings and hi hats. In The Seatbelts’ anime-jazz classic Tank!, the opening rhythmic bass guitar line sets the pace of the song and it never gets overshadowed by the brass or drums that take over later on with the Razer BlackShark V2.

Frequency response like this is also well tailored to just about any kind of game you’re into. The slight de-emphasis in the mids might make the sounds of footsteps in games like Valorant or Fortnite a little quieter, but not so much that they’d be hard to hear. While its audio is pretty well in line with the more accurate side of the gaming headset market, the Razer BlackShark V2 has arguably the best isolation of any gaming headset we’ve tested. There’s no active noise cancelling here, but some this headset still blocks out more sound than quite a few noise cancelling headphones including Razer’s own Opus. That may sound extreme, but but remember: isolation is more important for blocking out incidental sounds (the clattering of dishes or a baby crying)—ANC is only effective at getting rid of droning sounds (the whirring of a fridge, or low rumble of an engine).

Regardless, if you’re looking for a good headset for keeping the noises of your household at bay, you could do a whole lot worse than this. Expect people with deep voices to sound a little hollow with this mic.

Unfortunately, the Razer BlackShark V2’s microphone can’t match its fantastic audio output and isolation. Like most gaming headset microphones, there’s a steep de-emphasis in the bass and mid range here, as well as a slight over-emphasis in the high range. This means sibilant sounds (F,S, and SH sounds) will come through more clearly, but people with deeper voices will sound a little distorted.

This is a cardioid microphone, which means points at your mouth and doesn’t pick up sound much outside that area. Case in point: while recording this sample, Slack notifications pinged over my speakers multiple times. See if you can hear it:

Should you buy the Razer BlackShark V2?

The Razer BlackShark V2 absolutely nails the balance between comfort, audio quality, and features that headsets around its price aim for.

It doesn’t matter if you’ve got $500 budget or a $50 one, the Razer BlackShark V2 is worth considering.

The sub-$100 range for gaming headsets is pretty much the most competitive part of the whole market. It’s a space littered with very good and great options that pair accurate audio with lots of great features. Given all that, it’s pretty uncommon to feel comfortable unreservedly recommending a headset at around this price, unless we’re talking about the HyperX Cloud Alpha—frankly, this headset gives the Cloud Alpha a run for its money.

That’s not to say this is absolutely the right choice for everyone. If cords are a problem for you, a gaming headset like the SteelSeries Arctis 1 Wireless brings best in class battery life and multiplatform wireless audio. Also, If you’re only interested in something for consoles, you don’t need to spring for something with as many PC-centric features—headsets like the Fnatic React or Sennheiser GSP 300 would suit you fine.

However, few headsets sound as accurate as Razer BlackShark V2. Fewer still are as comfortable. Virtually none offer comparable isolation. Even if your budget stretches far higher that $99, you’d be hard pressed to find something better. The Razer BlackShark V2 Pro is designed for users who prefer an untethered gaming experience.

The Razer BlackShark V2 Pro features significant improvements over the standard BlackShark V2, including wireless connectivity and a significantly improved microphone. While its isolation and sound quality may not be as good as its non-pro counterpart, the BlackShark V2 Pro is still a great wireless headset—especially if you’re already invested in Razer’s accessory ecosystem.

Of course, with these improvements comes a premium price tag, with the BlackShark V2 Pro available for around $179. It’s not the most expensive gaming headset on the block, but it may leave a dent in some people’s bank accounts.

What about the Razer Kaira Pro?

Unlike the Razer BlackShark V2, the Razer Kaira Pro is specifically oriented toward Xbox consoles, specifically the Xbox Series X. When you use the BlackShark V2 with an Xbox console, you must plug the headset in via 3.5mm cable, but the Kaira Pro supports Xbox Wireless dongle-free audio. If wireless audio is a must-have, and you want to give Windows Sonic surround sound a try, the Kaira Pro may be a justifiable purchase. Otherwise, if you want something more versatile for less, stick with the BlackShark V2.

Is the BlackShark V2 good for mobile FPS games like PUBG Mobile?

If your phone has a headphone jack, it's fine. It'll function like any other pair of headphones with a mic.

Can you remove the mic?

Is the cable detachable?

No, but the USB adapter is, so you can still use the headset via 3.5mm.

Should I get the Razer Blackshark V2 or the HyperX Cloud Alpha S?

The Razer BlackShark V2 offers a more comprehensive software experience, and far better isolation. The HyperX Cloud Alpha S struggles with isolation in comparison, largely because of its adjustable bass vents, which let you adjust the bass volume by opening ports in the headphones to varying degrees. If you're looking for something that's more reliable for blocking outside noise, get the BlackShark V2. If having more physical control, granular though it may be, over your sound output is more important, get the Cloud Alpha S.