The Sennheiser GSP 300 jettisons the bells and whistles in favor of a more focused, better executed package. How does it stack up to the competition?

The Sennheiser GSP 300 is a competent stereo gaming headset. It handles the necessities well, but doesn't really do anything to set itself apart from the competition in its price range.

Sennheiser makes some of the best headphones on the market, but the company’s gaming headsets tend to miss the mark. They’re reliably good, but often held back by one or two quibbles—usually revolving around an extra feature or a less core design element. The Sennheiser GSP 300 aims to avoid all that, offering just the basics for under $100.

A lot of gaming headsets offer the basics and more for the same price, though—how does this one match up?

Who is the Sennheiser GSP 300 for?

From a certain perspective, the Sennheiser GSP 300 is actually little bit confusing. On one hand, this is a very simple gaming headset: it sports a split 3.5mm analog connection, and so offers just the basics from a features perspective—this is a pair of stereo headphones with a mic attached to it. However, while the function may be simple, the form is anything but.

This gaming headset features a similar design to Sennheiser’s other GSP gaming headsets, which isn’t inherently bad. It’s made entirely of plastic, and while it doesn’t feature any LED lights or strange sharp angles, it positively screams “gaming headset.” The cushions on the headband are covered in a bright blue mesh, and the frame is bulky and angular. The headphones connect to the band with a tilting joint that can bend any way you like, within reason. The attached microphone is, in a word, huge—it’s got a thick bendable arm and a big head.

In short, the Sennheiser GSP 300 is a pretty conspicuous device, but that’s not necessarily something to hold against it.

The adjustment mechanisms are pretty clunky looking, but this is a very comfortable headset.

The plastic build makes this headset exceptionally lightweight. The headband adjusting mechanism may look a little clunky, but it works and, coupled with the tilting headphone joints, it makes for a really comfortable experience. The headphone pads are covered in leatherette, and had no trouble establishing a seal around my ears. Unfortunately, gamers with glasses won’t find it so comfortable, and Sennheiser doesn’t sell velour replacements.

Actually using the Sennheiser GSP 300 headset is very straightforward. There aren’t a lot of bells and whistles with this thing, and so there’s not much to clutter the interface. The microphone is permanently attached to the headset and mutes when flipped up—you’ll hear a click when it happens. There’s also a big volume dial on the right headphone, and that’s all there is to it.

Gaming with the Sennheiser GSP 300

Luckily, the dongle is pretty short, so using it with a controller doesn’t feel like you’re covered in cords.

Gaming with the Sennheiser GSP 300 is similarly straightforward. This is a 3.5mm gaming headset, with no surround sound or any software-based features, so it’s pretty much just a plug-and-play affair. It’s absolutely comfortable enough for long gaming sessions, and I never ran into any issues playing games and chatting over Discord for hours.

The headset is well suited to games like League of Legends and Dauntless on PC, but it lacks surround sound for battle royale and shooter games like Fortnite and Overwatch. This isn’t necessarily such a serious issue, as surround sound is more of a luxury feature. It won’t make you better at a game, it’s just another source of information. Some games, like Overwatch, even offer in-game virtual surround sounds settings, so it’s far less of issue there.

Using the dongle with a Nintendo Switch works like most TRRS 3.5mm headsets, so it can still do voice chat with games like Dauntless, Fortnite, and Warframe.

Playing on console is similarly straightforward, but you’ll need the included 3.5 dongle to do it. Unfortunately, even though the headset defaults to a split mic/headphone connection, you can’t use it with the app-based  Nintendo Switch voice chat system. Regardless, once you use the dongle, the headset works just fine on every console.

How does the Sennheiser GSP 300 sound? The chart may seem a little all over the place, but don’t worry too much. The headset still sounds totally fine.

The GSP 300 reproduces relatively accurate audio; though, there are definitely a few things worth mentioning. There’s a pronounced de-emphasis in the sub-bass range, as well as in the high range around 4kHz. Outside of that, there’s generally accurate output in the mids and bass range.

In music, frequency response like this is pretty decent for just about whatever you want to listen to. The de-emphasis in the very low bass range can make electronic music sound a little less punchy. Some bass drums and bass guitar notes can be hard to perceive too, but you’d have to be listening pretty closely to notice. The real trouble you might run into is songs where bass lines are already rather faint. In Bikes by Rubblebucket, the bass guitar line normally sounds subdued but audible, yet it’s genuinely difficult to hear while using the Sennheiser GSP 300.

A sound profile like this is less of an issue for games. The de-emphasis in the bass range might make some of the really low rumbling in an explosion seem a little quieter, but you’re never going to feel like it’s quiet relative to everything else going on in a game. Plus, it makes it easier to hear more nuanced sounds like footsteps, enemies reloading nearby, and even your chatting teammates. This is pretty normal stuff for a gaming headset—good for a TV blaring in another room, and not much more.

The Sennheiser GSP 300 features pretty good isolation for a gaming headset. Like most gaming headsets, there’s nothing approaching active noise cancelling here, but you shouldn’t run into any issues with the typical creaky flooring and whirring fridges that pop up at home. It won’t fare quite so well outside, but from the connection method to the physical design of the headset, it’s clear the GSP 300 was never intended for that anyway. 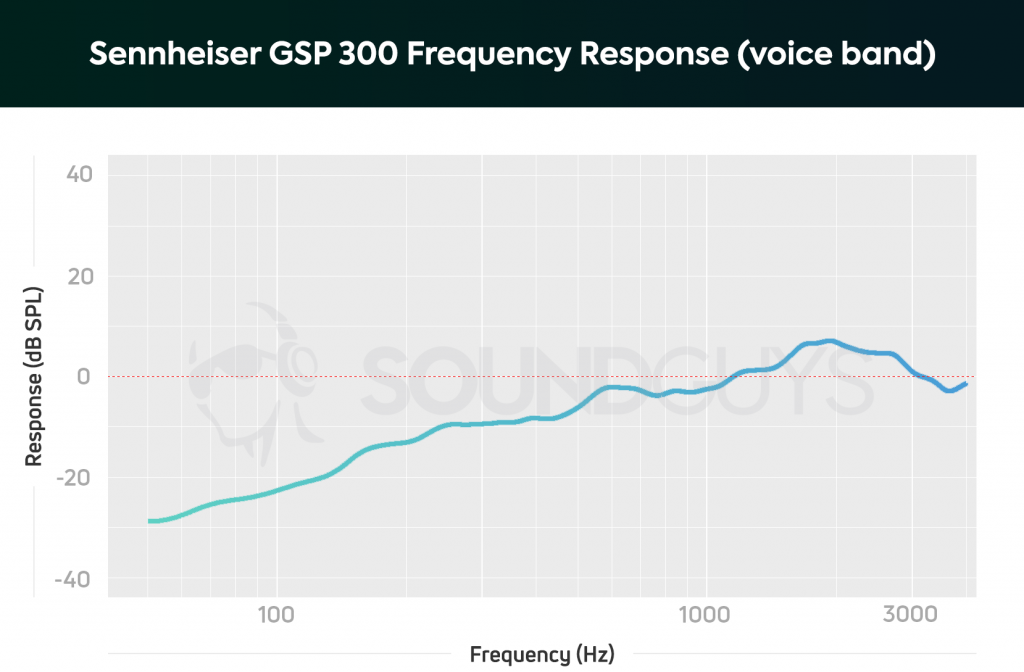 That the de-emphasis stretches into the mid range is a little worrying, but the mic still sounds okay.

The Sennheiser GSP 300 features a pretty average microphone for a gaming headset. There’s a notable de-emphasis in the bass and mid range, up to around 1kHz, and slight emphasis in the from 1-3kHz range. This means people with deeper voices can sound pretty distorted, and overall a little quieter. It also means that parts of speech that occupy the high range, like sibilant sounds (F, S, and SH sounds), can actually come through a little more clearly. Listen for yourself:

Should you buy the Sennheiser GSP 300

If you’re on PC, maybe the Sennheier GSP 300 gaming headset is worth it, but there are lots of other options to consider.

The volume dial is big and easy to find, even in the heat of gameplay.

The Sennheiser GSP 300 is a good gaming headset—there’s no doubt on that front. However, the sub-$100 price range is perhaps the most packed part of the gaming headset market. There is an absolute glut of great options, and a ton of them offer considerably more features than this gaming headset.

This headset is comfortable, sounds good, and it works on most platforms. However the HyperX Cloud Alpha is more comfortable, sounds better, and works on all the same platforms for the same price. Ditto for the SteelSeries Arctis 1 Wireless, and that also uses a USB-C dongle to connect wirelessly to an undocked Switch (and everything else using a USB-A adapter).

This feels more competitive with headsets like the Razer Kraken X, Turtle Beach Recon 70, and Corsair HS60 Pro Surround. However, all of those headsets are considerably cheaper, and they all offer surround sound in one way or another. In short, you could do a lot worse than the Sennheiser GSP 300, but you don’t have to look far to do better, too.