The Barracuda X joins rarified company offering wireless audio with a USB-C dongle for under $100 USD. Does it live up to its potential?

The Razer Barracuda X is a solid performer for $99 USD, and its USB-C makes it compatible with a lot of platforms. It's a little light on features, but given that most platforms handle the big audio features themselves now, you don't need need much. 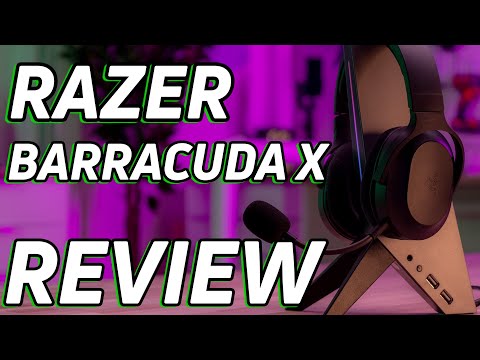 Razer’s been putting out audio products with a little less flash and a little more substance for a little while now, with headsets like the BlackShark V2 and Kaira Wireless. Now the company is back with another low-price, high-value product. The Razer Barracuda X is a low-profile wireless gaming headset that works just about everywhere, and weighs a lot less than most gaming headsets.

Is that enough to make this worth buying?

Editor’s note: This review was updated on January 6, 2022 to include a microphone score based on feedback from our reader poll. Thanks for voting!

Who is the Razer Barracuda X for?

What is it like to use the Razer Barracuda X?

There’s a dial for volume, a toggle button for muting the microphone, and a button for power.

It’s already clear when taking the Razer Barracuda X out of the box that it’s super lightweight compared to most gaming headsets (or regular headphones). At 250g, this is almost 40% lighter than a heavy metal gaming headset like the Corsair Virtuoso Wireless XT, and it’s 30g lighter than the Logitech G733, which is already billed as a lightweight headset. This means the Barracuda X could be an ideal candidate for people who want something that’s easy to wear all day.

This emphasis on all-day use is highlighted by a lot of this headset’s design. On top of being all plastic, the Razer Barracuda X features the same mesh fabric ear pads as Razer’s BlackShark V2 headsets. These pads manage heat around your ears very well, and they’re quite soft. The headband offers just the right amount of tension to feel secure without feeling too tight.

A control layout like this makes it easy to find what you’re looking for by touch.

Actually using the Barracuda X is very simple. This is billed as a multi-platform gaming headset, and as such, it doesn’t rely on the Razer Synapse companion app for any features—not that there are many additional features to speak of. Once you connect the headset to your platform of choice, the on-ear controls allow you to adjust headset volume, mute the microphone, and power the headset on and off. The controls are all laid out in a row on the bottom edge of the left headset, but they all have different profiles, so figuring out which one you’re touching is easy.

How long does the Razer Barracuda X battery last?

According to Razer, the Barracuda X can last up to 20 hours on a single charge, and we found that it performs even better. It lasted 25 hours, 22 minutes on at a consistent output of ~75dB—not the absolute best of the best, but pretty close. The wireless headset charges over USB-C in a couple of hours (when the LED indicator shines green and stops flashing, it’s full). Because of the lack of Synapse compatibility, there’s no way to get an exact battery reading—the LED light on the bottom of the headset will give you a rough estimate.

The Razer Barracuda X doesn’t support fast charging of any kind. Of course, when the battery runs out, you can always switch over to a 3.5mm connection if you’re in the middle of something and don’t want to take a break to charge up.

How does the Razer Barracuda X connect?

You can also use a 3.5mm connection to connect to your smartphone, or an Xbox console, which otherwise doesn’t work with this headset.

The Razer Barracuda X supports two connection methods; wired using the included 3.5mm cord and wirelessly using the included USB-C dongle. There’s also a USB-A adapter for the dongle, so you can use the headset even if your device doesn’t have the newest ports. However, the USB-C dongle opens up a range of platform options, like an undocked Nintendo Switch, the other (less used) port on the front of a PlayStation 5, and even smartphones that charge using USB-C. If you’re concerned about the wide dongle crowding ports, there’s always the USB-A adapter to fall back on.

How is gaming with the Razer Barracuda X?

The detachable mic is the same one you’d find on the Razer BlackShark V2 Pro.

The Razer Barracuda X offers a solid gaming experience across platforms. Given its battery life, lightweight build, and mesh earpads, the headset is well-tailored to marathon sessions, if that’s your style (shorter sessions are good too—remember to take breaks!). The varied mix of combat sounds, dialog, and a new funkier soundtrack in Final Fantasy VII Remake Intergrade Intermission on PlayStation 5 sounds great coming through the Razer Barracuda X.

As this headset doesn’t support Synapse, it relies on whatever platform you’re gaming on for things like virtual surround sound, and it doesn’t struggle with compatibility for any of the major ones. The PlayStation 5’s 3D audio feature works well coming through the Barracuda X, adequately recreating the sensation of swinging through New York City traffic in Marvel’s Spider-Man Miles Morales. Windows Sonic spatial audio is one of the less intense virtual surround sound standards, but the Barracuda X still works well with it, with a decent level of positional audio in Sea of Thieves on PC.

How does the Razer Barracuda X sound?

The drop in the sub-bass range is a little surprising.

The Razer Barracuda X offers fairly accurate audio for a gaming headset, loosely following our target curve, except in a few spots. There’s a drop in output in the sub-bass range, up to around 20Hz, as well as high range sound up to around 6KHz. However, midrange sound is nicely emphasized, as is most of the bass range.

Consistent audio output like this means that most music should sound pretty nice coming through the Razer Barracuda X, but you may find that bassier sounds lack some of their characteristic oomph. A lot of the kinds of droning or rumbling sounds you’d normally hear coming through a subwoofer occupy the sub-20Hz range, though headphones typically struggle to output this kind of sound anyway.

In the Herb Alpert & The Tijuana Brass cover of Walk, Don’t Run, the trumpets come through clearly, as does the rhythm guitar strumming that underscores a lot the song, but the de-emphasis in the bass and high range makes it hard to hear the rhythmic bassline and treble notes respectively. As more instruments are introduced into the song, the bass drum starts to get masked out, and the higher-pitched guitar noodling in the background of the song is hard to hear basically throughout.

In game, frequency response like this should be great for pretty much every kind of game. You may find that the rumble of a grenade doesn’t pack the same kind of audio punch if it goes off next to you, but many people may prefer that—especially in a multiplayer situation. Generally, video games don’t layer sounds as subtly as a lot of music, so you probably won’t even notice if something is a little quieter than usual. An explosion is always going to be the loudest thing in a given moment, regardless of minor changes in low-end response.

How well does the Razer Barracuda X block out background noise?

This isn’t going to block out much, but it should be alright at home.

The Razer Barracuda X features pretty average isolation for a gaming headset. There’s a decent enough level of attenuation in high range sound to make minor annoyances like someone talking loudly in another room, the whirring of a fridge, or the occasional car horn out a windowless less aggravating. This isn’t going to stand up well in a cafe setting, where incidental noises are very common, which is a little disappointing, given this headset can work with smartphones—the more restrained design (and detachable mic) makes for something less gaudy than most gaming headsets, so in theory, it’s better suited to going outside.

Getting the microphone in the right spot is pretty easy.

The Razer Barracuda X microphone sounds quite good for a gaming headset. It still has a little bit of a de-emphasis in the bass range, but even people with deeper voices should come through pretty clearly. However, the microphone is a little on the quiet side—the most common comment I get on a Discord call is that my friends need to turn me up. It’s not serious, but the default volume has a little trouble keeping up with game sounds.

Should you buy the Razer Barracuda X?

If you’re looking for an affordable multi-platform wireless gaming headset, you should consider the Razer Barracuda X—frankly, it’s hard to find better for $99 USD.

Having ear cups that swivel to lay flat is a nice touch.

The Razer Barracuda X isn’t a perfect gaming headset. Its audio output is a little odd in some places, and its isolation leaves a little to be desired, given its slightly more lifestyle-oriented bent. However, for the price, there aren’t many gaming headsets that work this well on so many platforms.

Overall, it’s hard to imagine being disappointed with the Razer Barracuda X. The headset pretty much nails the basics, and it leaves out the frills that newer platforms handle on their own—it’s especially great if you’re moving between platforms over the course of a whole day, and it’s unobtrusive enough to be a real contender for someone who spends a lot of time in Zoom calls.

What are some alternatives to the Razer Barracuda X?

If you don’t want to cross that $100 line, but you want something with more control options, the SteelSeries Arctis 1 Wireless sports pretty much identical features to the Barracuda X. It has the same kind of USB-C dongle, and comparable battery life. However, it also supports SteelSeries’ Engine app, which lets you set custom EQ profiles and check the exact battery life (something you can’t actually do with the Barracuda X).

Getting the Stealth 600 Gen 2 to work on consoles is a piece of cake.

If you’re looking for something with a more accurate microphone, the Turtle Beach Stealth 600 Gen 2 has one of the most accurate microphones you’ll find for under $100 USD. However, its wireless dongle uses USB-A, so it isn’t compatible with mobile phones or an undocked Nintendo Switch—it also doesn’t support 3.5mm.

If you’re really attached to this price range, but you want more features, you’re better off looking at wired options. For the same price, the Razer BlackShark V2 brings a whole lot more features on PC, and better isolation. For $30 more, the Logitech G Pro X brings a wide array of features, swappable ear pads and cables, and a microphone software suite with tons of options.