Reliance on an app for using some features.
Slightly overemphasized bass.
Mic struggles with bass.

This is a reasonably priced, fully featured, and convenient wireless headphone. It doesn't nail everything, but hits an overall bar of quality you'd have to spend considerably more to match.

SteelSeries has been a force in the gaming space for years, offering just about any kind of peripheral you could need. The Arctis 7 is the next in a long line of gaming headsets from the company, bringing a Discord-certified mic, long battery life, and wireless functionality.

The gaming headset market gets more crowded every week—how does this one stack up?

Editors Note: This review was updated on July 20, 2020 to include FAQ answers.

Who’s The SteelSeries Arctis 7 for?

The Steelseries Arctis Pro is for gamers of all stripes who want an easy, wireless solution to their audio needs. This headset works like a charm on PC and Playstation 4, with slightly more limited functionality on Xbox One and Nintendo Switch. The SteelSeries Arctis 7 comes with a way to connect to just about everything. The SteelSeries Arctis 7 is comfortable and sturdy headset.

The SteelSeries Arctis 7 is a wireless headset that connects using a 2.4GHz wireless RF USB dongle, rather than Bluetooth. While that means the headphones are a little less versatile, you don’t need to spend as much time pairing anything, and it has no noticeable latency.

Its design is almost identical to the SteelSeries Arctis Pro, which we recently reviewed, with a sturdy aluminum frame and an adjustable, ski-goggle-like suspension band. The headphones sit on slightly offset hinges, with panels that have a matte texture.

Much like the Arctis Pro, the Arctis 7 is really comfortable. After briefly adjusting the velcro suspension strap, I easily settled in for a number of comfortable gaming sessions. The strap was comfortable and elastic, applying just the right amount of pressure to keep the headset snug on my head.

However, it being wireless, walking around my apartment occasionally made it feel a little loose. These headphones are definitely designed for use while seated, despite not actually needing to be all that close to whatever you’re gaming on. Even relatively gentle movement can jostle things a bit. The Airweave pads are comfortable and stay cool.

The headphone pads included with the headset are made of airweave fabric, which seems like it sits between leather and velour in rigidity. Just like the Arctis Pro, these pads didn’t get nearly as hot as leather, and they were large enough to fit comfortably around my ears. Even so, they may not work as well as velour with glasses, it might be prudent for bespectacled gamers to replace them.

Controls line the bottom of both headphones. On the left headphone, there’s a mic mute button, a volume dial, and 3.5mm, Micro-USB, and four-pin ports. The right side houses the power button and a dial for switching between the game and chat audio channels the headset supports (represented as Arctis Chat and Arctis Game when you’re using the Arctis 7 on PC).

The left headphone also houses the retractable microphone, which extends out about four inches on a flexible wire.

Unlike most gaming headsets, the Arctis 7 doesn’t positively shout gamer with its aesthetic. There aren’t any neon highlights or LED striping—the only prominent light on the whole thing shines when the mic is muted. However, as I mentioned earlier, these headphones aren’t terribly well suited to use while walking around, so how you’ll look in public matters a little less here.

SteelSeries Engine lets you turn on surround sound and customize the headset’s output and dynamic range.

While the SteelSeries Arctis 7 offers a lot of the same options as Arctis Pro, it does so using software, rather than an included DAC unit. The headset uses SteelSeries Engine 3, the same software other SteelSeries devices use.

Engine lets you customize the Arctis 7’s sound settings in a number of ways. You can toggle back and forth between stereo and 7.1 sound, set the audio dynamic range, and even manually adjust the headphones’ output at different frequencies.

I’m not generally a fan of needing an app to fully use a piece of hardware like this—to be blunt, it sucks you need this in order to turn on surround sound. However, the app itself is more straightforward than most similar offerings from SteelSeries’ competitors, so it doesn’t get in the way. It’s not ideal, but it could be worse. The Arctis 7 mic extends about 4 inches from the left headphone.

The Arctis 7 features 7.1 digital surround sound for gaming using DTS Headphone:X 2.0 tech as the Arctis Pro, offering realistic 3D audio environments in games like Overwatch and Fortnite. This implementation fell pretty well in line with my expectations for a gaming headset. The sounds of footsteps and gunfire were easy enough to place in Fortnite, as were the different vocal character cues of Overwatch.

The surround sound features didn’t make much of a difference compared to stereo sound in non-shooter games like Assassin’s Creed Odyssey and Draugen, but it was still nice to have.

To be clear, even when the added information of surround sound was useful, it didn’t make much better at a game—I’m still as middling a Fortnite player as ever.

How good is the SteelSeries Arctis 7’s battery life?

When SteelSeries released the Arctis 7, it said the battery would last 15 hours. Since then, the company released a firmware update to improve that, claiming it now reaches 24 hours of use on a single charge. That seems like a bit of a stretch, but update definitely improved things.

In our testing the SteelSeries Arctis 7 lasted 16 hours 32 minutes, but you might get a little more out of that, as we tested at a higher volume than most people choose to listen at. The Arctis 7 has all sorts of ports, dials, and buttons to control many of its features.

The SteelSeries offers wired and wireless connectivity options. When going wireless, it uses a USB dongle compatible with PC, Playstation 4, and the Nintendo Switch when it is docked. For wired connections to the Xbox One and undocked Nintendo Switch there’s a 3.5mm cord, though you lose out on the various software features and multiple audio channels.

According to SteelSeries, the Arctis 7 has a 40 foot range. I haven’t run into anything contradicting that—walking around my apartment never presented any issues.

How does the SteelSeries Arctis 7 sound? 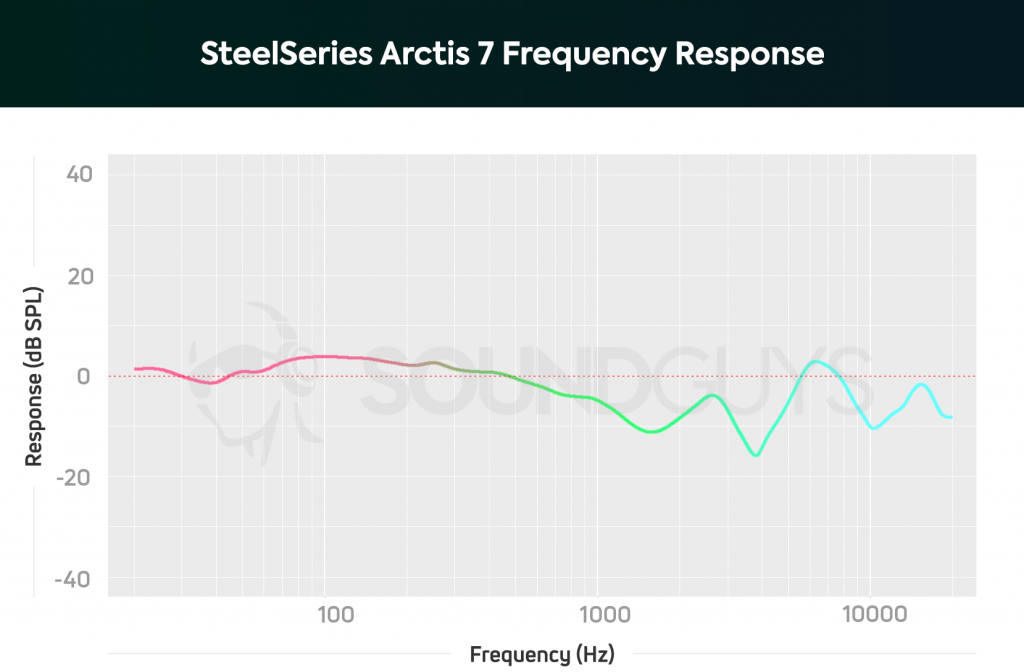 For the most part, this is a very normal, yet consumer-friendly sound.

The SteelSeries Arctis 7 offers pretty good audio output, with relative clarity across frequencies. It boosts bass, but not nearly as much as most gaming headsets. There’s also a little de-emphasis of mids around 1,500Hz.

In a game this means big explosion sounds will appear more prominent, sometimes at the expense of more subtle kinds of sound, like footsteps or different environmental noise.

Music sounds pretty good on these headphones, but i the sounds of strings and some cymbals can get a bit lost in tracks with a lot of bass or ambient noise. Take Gathering of Ancient Tribes by Goat for instance. The bass line comes through clearly, even though it’s not terribly aggressive, but the distorted guitar lines that make up a huge part of the song sound less like individual parts than a big indistinct whole. Greater emphasis of mids and highs would have helped with that. 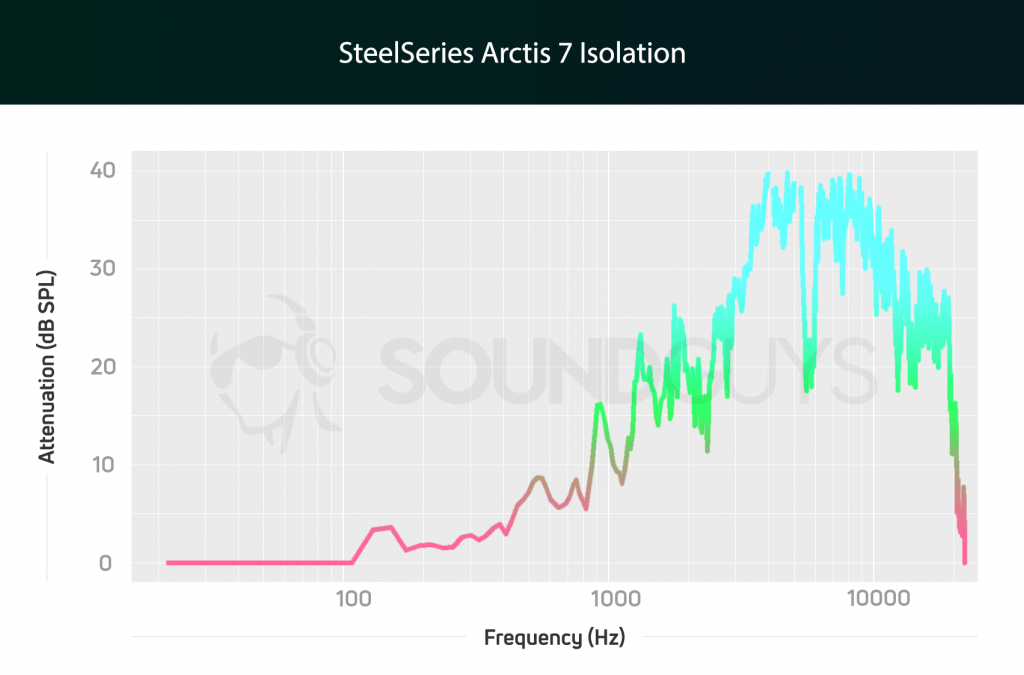 High-pitched sounds and mids will be blocked well, but low rumbles will reach your ears.

The Arctis 7 does as well or better than most gaming headsets when it comes to isolation. It can hardly compete with headphones with ANC, but you shouldn’t get any trouble from the sounds of noisy roommates, family in the other room, or the occasional traffic sound out the window.

Unlike most gaming headsets, these headphones actually work while out and about when using the 3.5mm cord. In an outdoors setting, these won’t do much to block out the rumbles and beeps of city life, but some of that you’ll probably want to hear some of that—it’s rarely a good idea to completely tune out your surroundings. 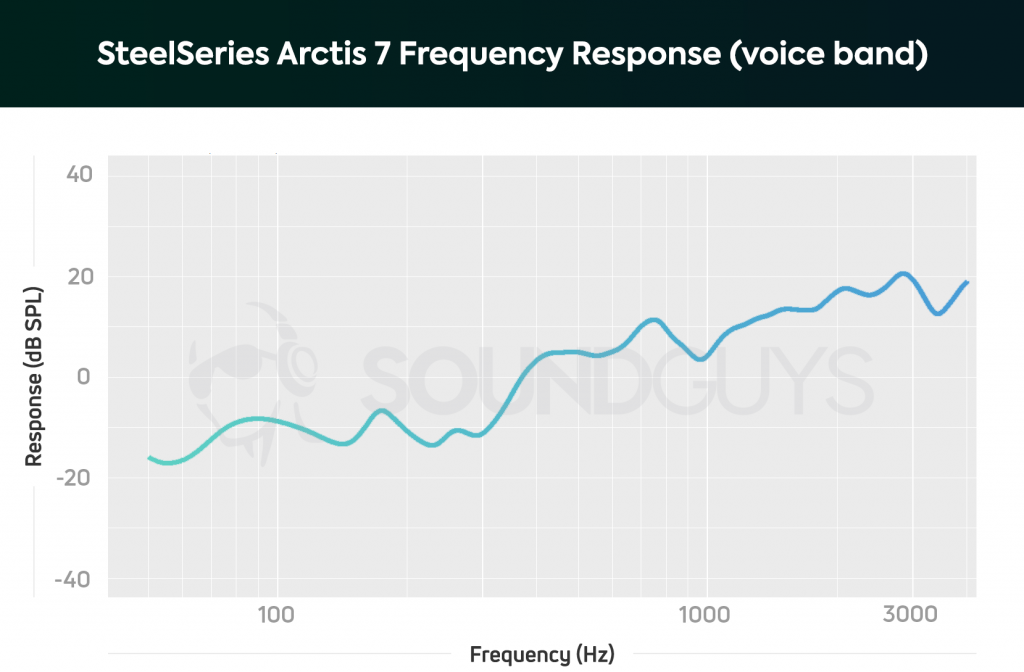 The integrated mic on the SteelSeries Arctis 7 is pretty much bog standard for a gaming headset. According to the box, this is a Discord-certified mic. Aside from a special icon popping up next to the input and output options in the Discord app, apparently this means the headset also does some of the voice processing work the program usually would.

It’s hard to tell if this is meant to bring greater audio quality to calls, but the mic still behaves much like non-certified mics on competing headsets. It has no trouble reproducing the range of most voices, with greater emphasis on the high end, where F S SH sounds tend to live. However, it also de-emphasizes bass frequencies, which can make lower voices sound tinny. Have a listen for yourself:

Should you buy the SteelSeries Arctis 7? The matte black finish of this model SteelSeries Acrtis 7 is unassuming.

The SteelSeries Arctis 7 is extremely comfortable, sounds pretty good, and offers a slew of features. The headset is compatible with just about everything it could be, and sets up in no time.

While I much prefer the Arctis Pro’s Game DAC unit to the Engine app, it’s also $100 more expensive, which is a lot to ask. There aren’t many headsets with sound as good and as many features as the Arctis 7 in this price range. If you’re really set on something cheaper, the HyperX Cloud Alpha sounds as good or better, but it doesn’t offer nearly as many options, and it’s wired to boot. The SteelSeries Arctis 1 Wireless is also a great option, with great sound and wireless functionality, though it’s not quite as comfortable and it’s mic leaves a little to be desired.

You’d have to spend a pretty decent chunk more to get better sound and features than the SteelSeries Arctis 7.

What's the difference between Arctis 7 and Arctis 3 Bluetooth?

The SteelSeries Arctis 7 is a wireless gaming headset that uses a 2.4GHz USB wireless RF dongle—you plug the USB dongle into your PC and the headset will connect to it for lag-free wireless audio. Despite the name, the Arctis 3 Bluetooth is actually a wired gaming headset, connecting to gaming platforms like the Nintendo Switch, PlayStation 4, and Xbox One via the 3.5mm headphone jack. It offers Bluetooth support for connecting simultaneously to a mobile device. Consoles don't support Bluetooth, so it won't help for wireless gaming.

The SteelSeries Arctis 7 and Arctis 1 Wireless are both pretty comfortable, but the Arctis 7's ear pads are definitely more substantial. If you're worried about your ears coming into contact with the headphone speakers, the Arctis 7 is the clear choice. Paired with its suspension band, it's just a more comfortable gaming headset overall.

How does the SteelSeries Arctis 7 fit on the ear? My current headset is a little too tight and can cause irritation.

If the SteelSeries Arctis 7 nails something as well or better than any gaming headset on the market, it's comfort. These are over-ear headphones, so they go around the ear, rather than rest on them. The suspension band is adjustable and made of a stretchy material similar to the band of a set of ski goggles, so you can set the tension to your liking too. If you want to upgrade to something more comfortable, you won't find a better option than this.