An experience, for sure.

Although there are better ways to spend $200, I definitely enjoyed my time with the Razer Nari Ultimate. If you're looking for a unique feature that provides a new experience while gaming or listening to music, these are an interesting choice. 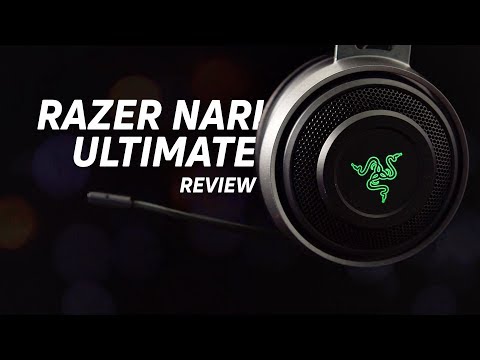 The company Razer is all but synonymous with gaming at this point. They know who their audience is and they also know that good audio can really take your gaming experience to the next level, which makes for some really interesting products. Today, Razer released their newest set of gaming headphones dubbed the Nari Ultimate, which they claim has “supreme wireless immersion”. The main feature here are specialized drivers in each earcup that provide haptic feedback to vibrate along with the bass. But is it simply a gimmick? Let’s find out.

The Razer Nari Ultimate are for:

What’s so special about the build of the Nari Ultimate? 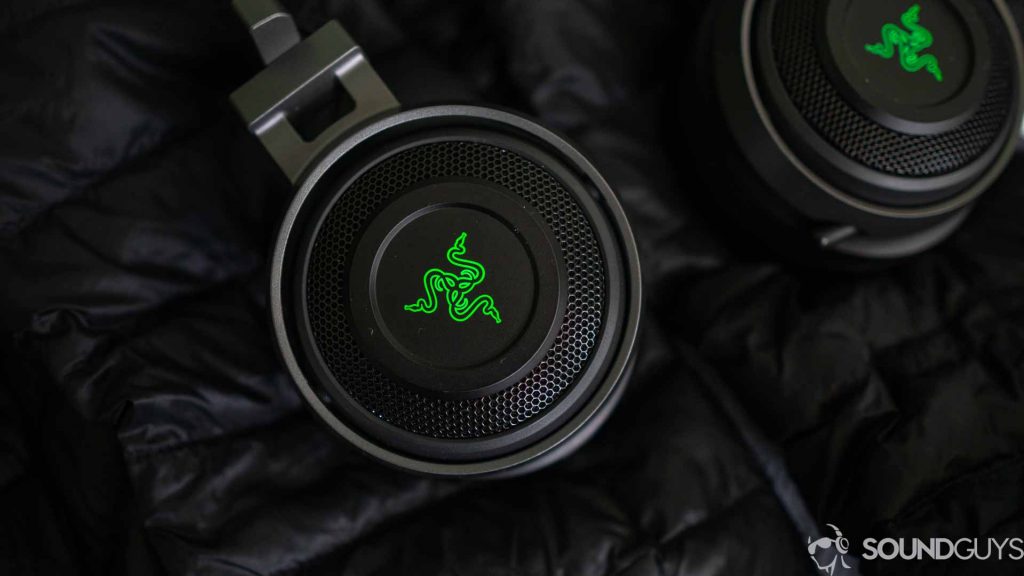 The Razer logo on the side of each ear cup glow subtly when you turn them on.

We’ll get into the connection, battery life, and sound quality down below, but it’s important to start with the build quality. Especially in this case, because there’s a lot to get into. The biggest feature of note is what Razer calls Hypersense featuring haptics by Lofelt, which provides haptic feedback for the low end via specialized drivers in each ear cup. It reminds me of a haptic watch I tried at CES a year or two ago from a company called Lofelt. It bumped along with the bass of whatever you were listening to and sure enough, the haptic feedback here was made by the same company. As you may have guessed, it’s supposed to add depth to the game you’re playing letting you feel on another level what’s going on in the game for full immersion.

Unfortunately, it’s pretty hit or miss. It’s particularly annoying when watching movies or YouTube videos, as seemingly every sound sets off a small vibration that has nothing to do with what’s going on. And when it comes to listening to music it’s sometimes enjoyable and sometimes annoying. The haptics feels way too strong, though according to Razer: you’ll be able to change the intensity levels in all production models of the Nari Ultimate. 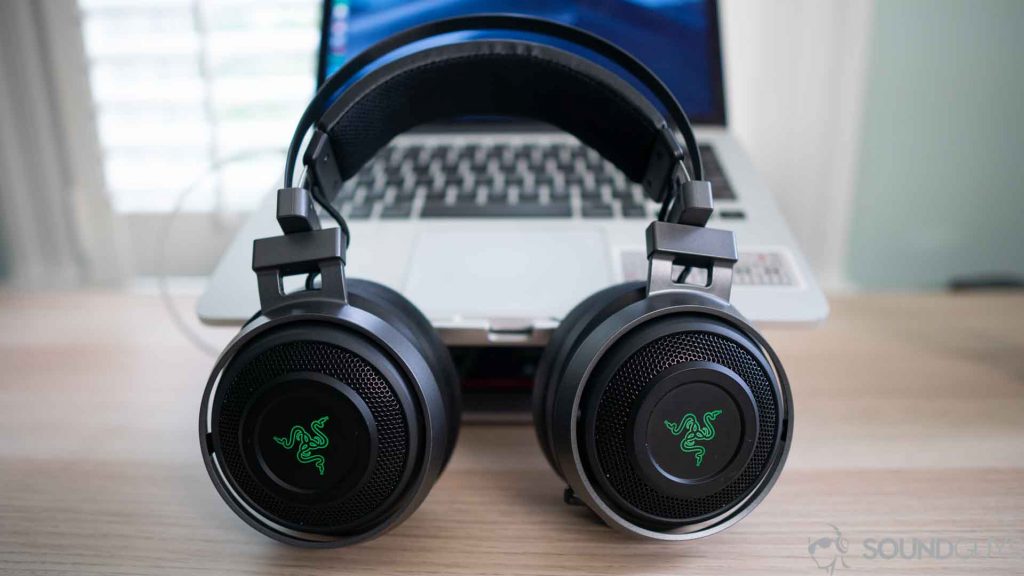 These headphones have a self-adjusting headband that works wonders and don’t feel like it’s pinching your head.

Now into the rest of the build. At first glance, the Razer Nari Ultimate are huge, and look like they were built for battle. But then you get a little closer and realize their materials aren’t what they appear. What I thought was a rough metal turned out to be a lightweight plastic with a paint job. The only metal I could find was on the headband, everything else is plastic. It’s a pretty convincing job though, and the plastic even feels cold to the touch just like metal would. This is good news because metal would make them heavier, and if you’re going to be sitting in front of a computer for hours at a time you’d want something lightweight. As these are already 432g as-is, I’m glad they didn’t go with actual metal, or they’d be even heavier. Still, I’m not sure how these would fare if they were crushed at the bottom of your bookbag.

Razer obviously put their Chroma RGB lighting in these

The earpads of the Nari Ultimate are similarly huge and made of a synthetic leather that isn’t the most convincing I’ve seen, and they feel a little cheap to the touch. That said, they’re super comfortable and even have hidden divets in the cushion for people who wear glasses. Attention to those kinds of details is what I look for, and Razer didn’t disappoint here. Razer obviously put their Chroma RGB lighting in these, and when I first found that out I shook my head and assumed the worst. But surprisingly, I really liked how the company managed this. Just like the Nommo Chroma speakers, they took a minimal approach here. The Razer logo on the side of each ear cup glows but isn’t super bright and is way more subtle than I expected it to be. It’s pretty great, especially in low light situations. What isn’t great are the two wheels on each ear cup that feel cheap and stuttery. The buttons are fine, but the wheels definitely could use some more TLC. Scrolling with them just isn’t as smooth as a pair of headphones that cost $199 should be.

How can you connect to them?

The Razer Nari Ultimate are wireless headphones, but that title comes with a catch. Mainly, that in order to use them wirelessly you have to plug in a USB adapter to your computer or console. Luckily, this little USB adapter can be popped in and out of a storage spot on the bottom of the right ear cup which is super nifty—but it means that if you want to use these with your smartphone: you can’t. It’s only for devices with a standard USB, so unless you plug in the included 3.5mm audio cable (which requires the use of a dongle even if you use Razer’s own phone) you can’t use it. If you want to use them with any devices that don’t have a USB input, you’ll need to use the included audio cable.

While gaming, one of the little wheels is also dedicated to mixing game and chat audio together. You can switch between game audio and chat audio, and everywhere in between. Just scroll the wheel to get the perfect balance for you. Above that is a dedicated mute button, and below is the power button, which also lets you know how the battery is doing depending on what color it is. 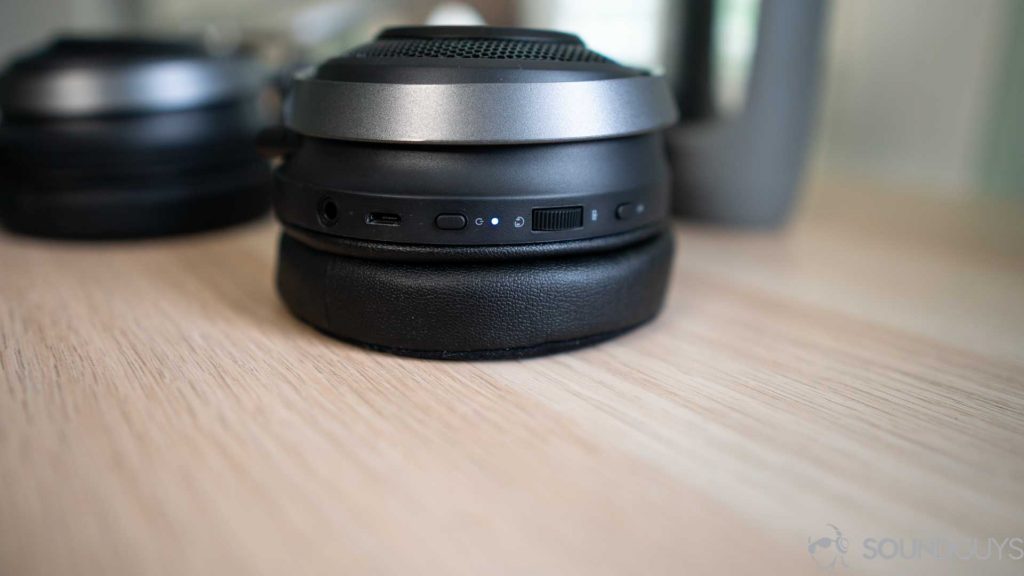 You’ll find most of the controls on the left ear cup, including the 3.5mm input, power button, mute button, and microphone.

As far as battery life goes, we were able to get these to last us exactly 8 hours and 22 minutes when streaming music constantly from our computer. As always, we had the headphones to output around 85dB which is the recommended listening level if you want to avoid noise-induced hearing loss. Charging is simple as you just need to plug in the included micro USB cable, though it’s a shame that it isn’t USB Type-C. A weird move, considering their phone charges via the standard as well. 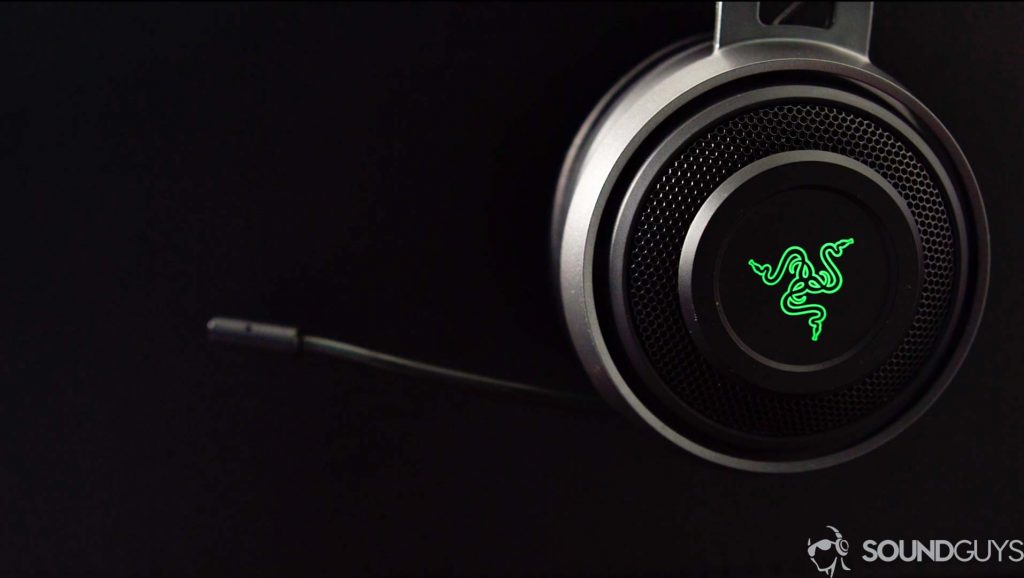 The microphone of is retractable, malleable, and sounds really good.

The first thing we should probably discuss is the microphone quality, because the Razer Nari Ultimate have a retractable mic that you can use when you need it, and hide when you don’t. For a quick sample of how it sounds in use, click the video up above. 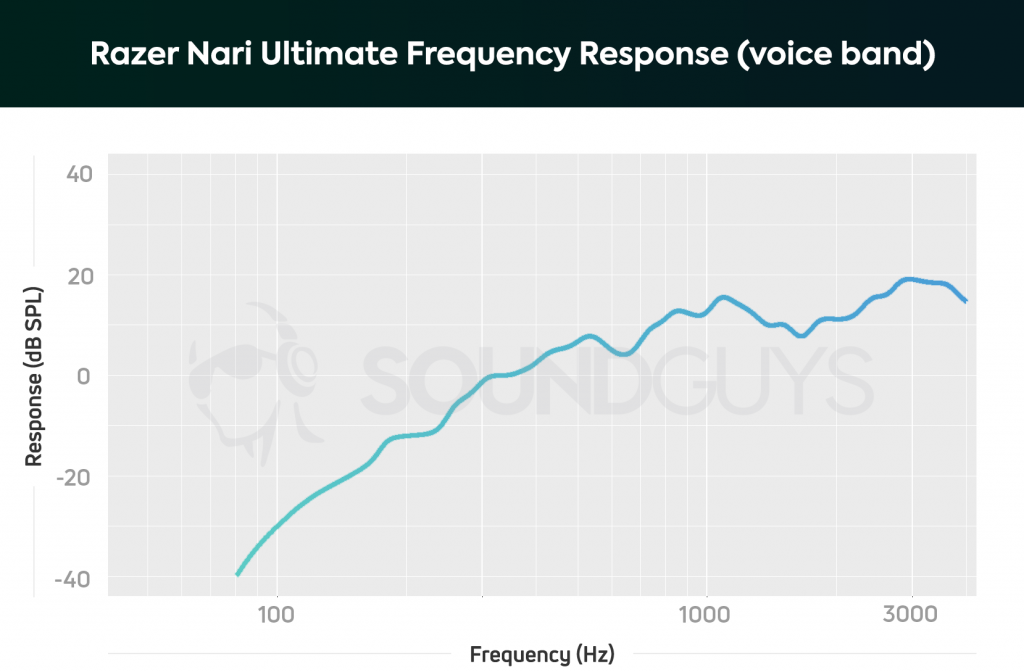 The Nari Ultimate’s microphone seriously de-emphasizes bass tones, but it should work fine for most voices.

The Nari Ultimate’s mic doesn’t have too much trouble clearly reproducing the sounds of the human voice, but it struggles with the low end. As you can see from the graph, frequencies under 1000Hz are very de-emphasized, which means those of us with deeper voices will sound a little distorted or tinny.

As far as sound quality goes when listening to audio, I was torn. I’m sure it’s fun while gaming, but when listening to music the overpowering haptics ruined it for most modern songs. A good example was in the song Run by Vampire Weekend, where because of the rolling drums and bassline, it just felt like the headphones were constantly shaking. That said when it works, it really works.

This feature was insanely fun while listening to older New Orlean’s style Jazz. During the song Trouble in Mind by Snooks Eaglin the soft feedback of the headphones really made it feel like I was listening to a live performance, with a soft rhythmic thumping that I could easily mistake for a bass kick at a show. That alone made these worth it for me as I mainly listen to old Jazz while I work.

That said, mids were definitely lacking in clarity which is weird considering part of the reason you’d get these is to communicate with people while gaming. 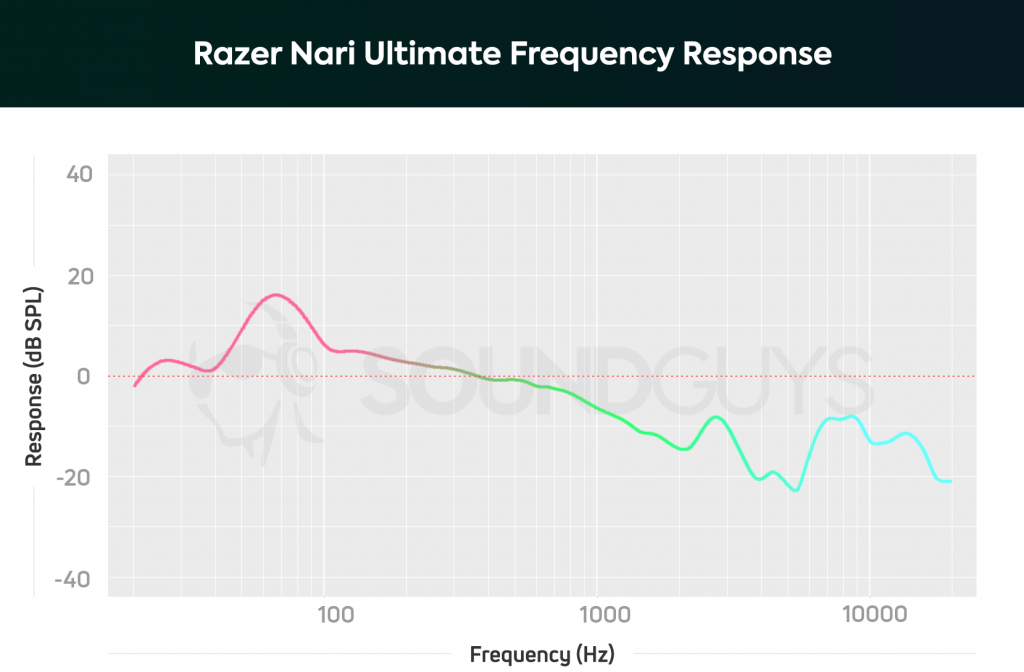 The Nari Ultimate de-emphasizes mids and highs quite a bit.

The Nari Ultimate starts de-emphasizing sound starting around 300Hz, affecting a the mids and highs. For a gaming headset this can be a bit of an issue in some games. Subtler sounds like footsteps, speech, and non-explosion noises typically occupy the mid range, and they can get lost in the booming sounds of explosions.

The lack of emphasis in the highs can distort the sounds of musical instruments like strings and cymbals. On high volume, the claps in Frank Oceans Pyramids all but disappeared after their initial hit. There’s none of the reverb I’m used to hearing. It’s all pulled back to avoid harshness, which is good if you’re going to be playing games with the volume blasted (again, don’t do that). The Razer Nari Ultimate doesn’t have any trouble isolating you from sounds in the home.

On the isolation front, the Nari Ultimate does a decent job. The headset can’t compete with ANC-sporting devices, but it can keep the sounds typical of home life at bay. You shouldn’t have any trouble ignoring noisy roommates in another room or the occasional sound of traffic out a window. The low rumbles and noises of walking around a city will still come through, but you probably won’t be doing a lot of walking around with these. 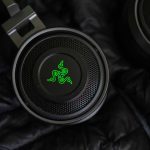 The Razer logo on the side of each ear cup glow subtly when you turn them on. 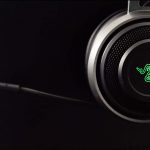 The microphone of is retractable, malleable, and sounds really good. 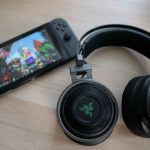 If you want to use them with any devices that don’t have a USB input, you’ll need to use the included audio cable. 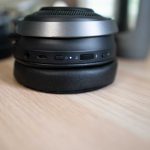 You’ll find most of the controls on the left ear cup, including the 3.5mm input, power button, mute button, and microphone. Though the padding is huge, plush, and comfortable, the two sliding wheels on each ear cup feel cheap. 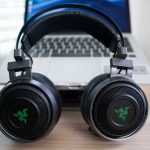 These headphones have a self-adjusting headband that works wonders and doesn’t feel like it’s pinching your head.

Though I’m not entirely sold on the build quality of the Razer Nari Ultimate—especially at the price of $199—I have to admit I really enjoyed using them. Though you can use them for music (and I used the hell out of them for that if you can’t tell), they’re made to provide another layer of immersion when gaming… and they do the trick. Now to be fair: I’m no gamer. I own a MacBook Pro, not a PC. And I ditched my PS4 in favor of a Nintendo Switch. So as proud as I am of my Splatoon 2 skills, I’m probably not the person that is going to get the most out of these headphones. And yet I still like them. Sure, they don’t sound as great as you’d expect when listening to music, but if they’re anything, they’re fun. And what is gaming supposed to be if not fun?

Razer Nommo Pro review: For the gamers and the non-gamers