One of our favorite neckband headsets with a great microphone system.

The LG Tone Flex XL7 is a top-end wireless neckband headset. It can upscale low-resolution files to 32-bit high-res audio for optimal streaming quality. Meridian Audio Technology results in a neutral-leaning frequency response that bodes well for nearly all music genres. If you want a wireless headset with few compromises, this is a stylish pick.

LG is doubling down on wireless neckband earbuds with its product refreshes of the LG TONE line. The LG TONE Flex XL7 is a premium headset at a fair price. The retractable earbuds are practical and dedicated Google Assistant is conveniently placed. If you’re in the market for wireless earbuds with great battery life and sound quality, you can’t go wrong with these.

Editor’s note: this LG TONE Flex XL7 review was updated on September 21, 2020, to include a microphone poll for readers.

Who should get the LG TONE Flex XL7? 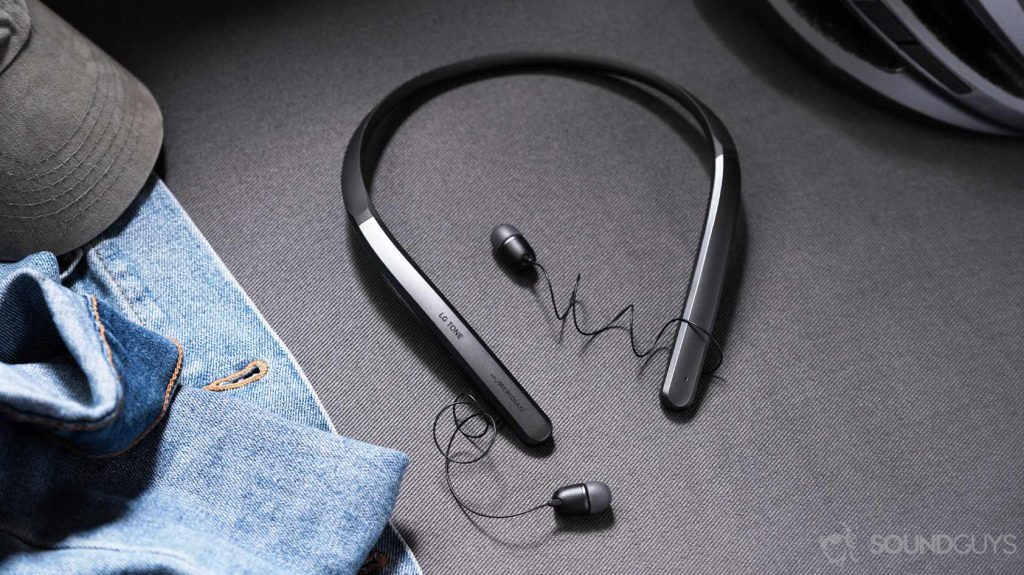 The Tone Flex XL7 earbuds have trouble retracting all the way into the neckband.

What’s it like to use the LG TONE Flex XL7? The neckband is flexible yet resilient.

As the name denotes, the neckband is flexible which makes it easy to stow the headset in a side pocket or purse. The rubberized segment has a modest stippled texture. This creates just enough friction against the back of the neck to keep the band in place. The left side of the neckband houses a few buttons for powering the headset on and making playback and volume changes. You’ll find the USB-C input on this side, too.

The opposite side has a single button for Google Assistant access. Pressing it prompts a female British voice to read your notifications aloud. If you want to make a command, hold the same button down for the duration of your command or question. Once you’re done speaking, release the button and Google Assistant will provide a response. The Google Assistant button sits independently from the playback controls, making it easy to find and use.

Retractable earbuds are a neat design but these ones needed help along the way. The ‘buds stopped withdrawing just a few centimeters from the neckband caps. I had to manually push the earbuds back into place. It’s not a huge deal. Yet it’s annoying seeing as this same mechanism works flawlessly on other LG headsets.

LG only provides large and small ear tips, so you may benefit from investing in a third-party pair.

This stands as yet another headset without angled earbud nozzles, which makes finding a proper seal more difficult than it would be otherwise. The headset lacks any water-resistance or official IP rating. However, it does have a nifty feature of vibrating during incoming calls. It doesn’t vibrate for general notifications though, which I found to be a shame. The headset affords over 10 hours of playback on a single charge.

Battery life is considerable. Our testing yielded 10 hours, 22 minutes of playback upon subjecting the earbuds to a constant 75dB SPL output. This exceeds LG’s listed eight-hour duration, and when the headset dies, you can quick charge it with the included USB-C cable. Just 10 minutes provides three hours of listening, which is the same as what the Tone Style SL6s grants. Battery longevity and fast charging are two marked highlights of the LG TONE Flex XL7.

Just like the other headsets in the LG TONE line, the LG TONE Flex XL7 operates via Bluetooth 5.0 firmware with a 10-meter wireless range. Similarly, you’re limited to AAC for high-quality wireless streaming. This is to the benefit of iPhone users; however, AAC’s performance on Android devices is volatile. It seems a shortsighted mistake to forgo aptX support with a headset equipped with Meridian Audio technology and 32-bit upscaling capabilities.

Bluetooth multipoint functionality is supported: you can connect to two devices simultaneously and alternate between the two by pausing playback on one and playing content on the other. This is great if you’re working from home and want to keep an ear on potential incoming calls while streaming audio or video from your desktop.

What do the LG TONE Flex XL7 sound like? The LG Tone Flex XL7 earbuds have a neutral-leaning frequency response and perform well with nearly all genres. Isolation isn’t great but can be improved by investing in memory foam ear tips.

LG teamed up with Meridian Audio to tune the LG TONE Flex XL7 and audio quality is significantly clearer than the Tone Style SL5 and SL6s earbuds. This is in part due to the 32-bit DAC. While 32kbps is overkill, the technology upscales low-quality audio files, emulating high-res ones. If a file is notably low-quality, you may be able to perceive a difference.

This headset has a fairly neutral response across the most audible portion of the frequency range. See how the green line neatly follows the red dotted line in the frequency response chart? That means those notes are accurately reproduced with minimal emphasis or attenuation. This serves those with eclectic taste as nearly all music will sound good with the Tone Flex XL7. 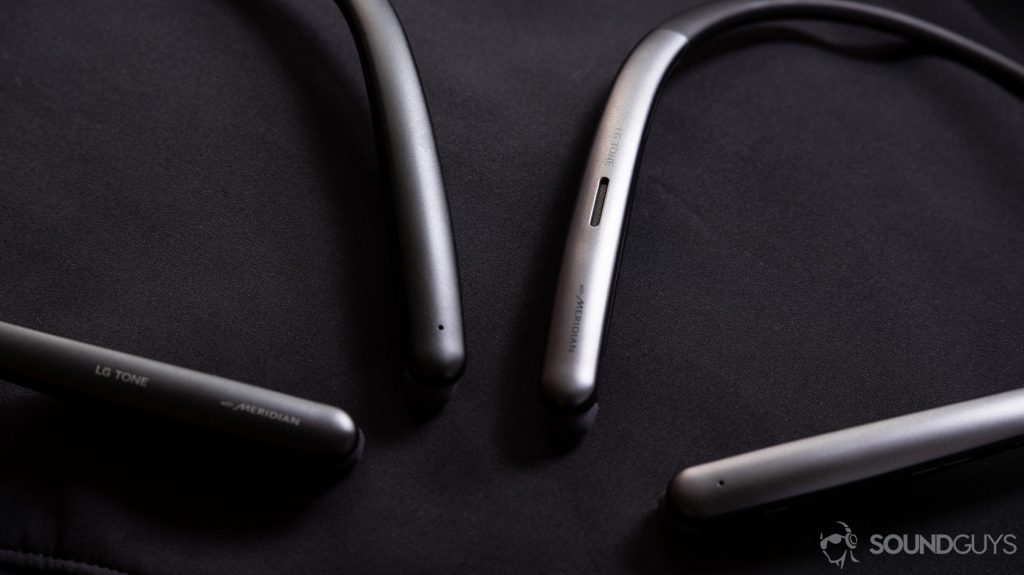 The earbuds isolate you from high-pitched sounds, but low noises like neighboring traffic remain audible. If you’re unable to get a proper seal, you’re bound to encounter auditory masking. This is when a louder sound makes it hard to discern a quieter one. See, our brains have limited processing power and can’t equally perceive limitless stimuli. It may be worth the extra few bucks to get a pair of memory foam ear tips. These will filter out external noise and optimize low-end reproduction.

Jimmi Charles Moody’s song Happy Song opens with an F-G-B piano chord progression, which is accompanied by a lone whistle pattern and finger snaps. The whistling remains distinct from the lower piano chords. This surprised me seeing as some attenuation occurs from 2-7kHz, where we’d expect to find the harmonic resonances of a person whistling. That said, snapping is hard to identify in the intro and verses because Moody’s low voice and the piano chords’ fundamental frequencies overlap.

I enjoyed the sub-bass attenuation for this song because the bass guitar’s presence is prominent as is, a consequence of how the song was mixed. However, with the slight de-emphasis, it’s still a staple of the song but doesn’t run the risk of masking the cymbal hits which enter during the chorus or continuous whistling. 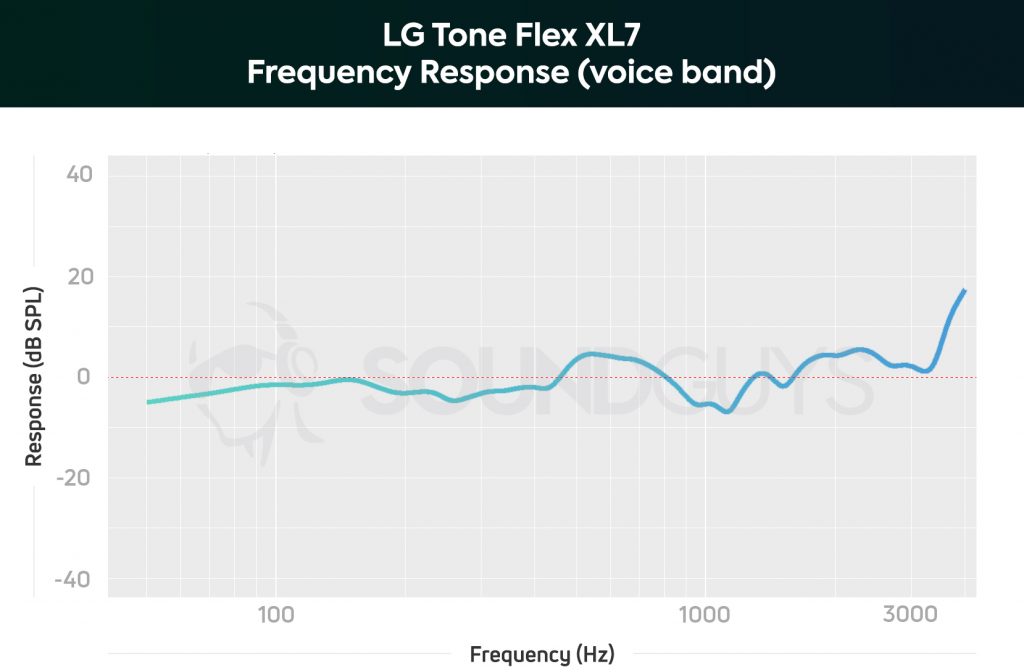 The microphone is significantly better than our previously reviewed LG wireless neckband earbuds. When limiting the mic’s response to the human voice band, we see that audio reproduction is fairly even across the board. Whether you have a high or low-pitched voice, the Tone Flex XL7 will make you sound as you do in real life. Clarity, however, is subject to change depending on how much you’re moving. Anytime I was talking and walking, the person on the other line could hear the microphones rustle against my clothing.

How does the LG TONE Flex XL7 compare to other wireless neckband earbuds? The LG TONE Flex XL7 is LG’s flagship pair of neckband wireless earbuds. They initially retailed for $149 and have since been reduced to $119, making them a bargain for those in search of high-quality wireless streaming and sound quality.

If you want a more feature dense pair of earbuds, you may want to direct your attention to the Plantronics BackBeat Go 410 with variable noise cancelling or the RHA T20 Wireless. RHA’s earbuds are unique in that they allow you to switch out filters as a way to alter the sound. You can also convert them from wired to wireless earbuds thanks to the MMCX connectors.

Should you buy the LG TONE Flex XL7?

Yes, the LG TONE Flex XL7 is the best headset between the Tone Style models. These are great for anyone who wants a pair of Google Assistant-integrated earbuds with reliable connection quality and accurate sound quality. Again, the lack of aptX support seems a short sighted decision, but it’s no secret that the best audio quality is experienced through wired listening anyway.

If you like the LG TONE Flex XL7 but feel it may be a bit out of your price range. The LG TONE Style SL5 boasts a similar design sans-Google Assistant integration. Interestingly, the retractable earbud mechanism works more effectively on the cheaper model than this one. You can also abandon LG altogether as we’ve compiled a list of the best wireless neckband earbuds for those who aren’t yet ready to dive into true wireless picks.

Does the LG Tone Flex XL7 have noise cancelling?

The LG Tone Flex XL7 headset doesn't support noise cancelling, but we happen to have a complete list of the best noise cancelling earbuds for those in the market. Listeners who need something with water-resistance, good microphone quality, or great battery life will find it all there.