A streamlined design and reliable pair of neckband earbuds.

Cables are very thin
Few ear tips
no aptX, AAC and SBC only

If you like the idea of true wireless earbuds but are concerned about losing them, the LG Tone Style SL5 is a great middle-ground solution. This headset has retractable earbuds, so you never have to worry about misplacing one or the other. Battery life exceeds LG’s specs. If you’re always on the go, be sure to take these with you.

LG is an audio monolith and household name. It sticks to what it knows and hasn’t deviated from its neckband wireless formula with the LG Tone Style SL5. This headset features retractable earbuds, high-performance quick charging, and a sleek design for all listeners. If your budget is $100, these may be the ‘buds for you.

Editor’s note: this review was updated on March 12, 2020, to address FAQ section questions regarding Bluetooth pairing.

Who is the LG Tone Style SL5 for? 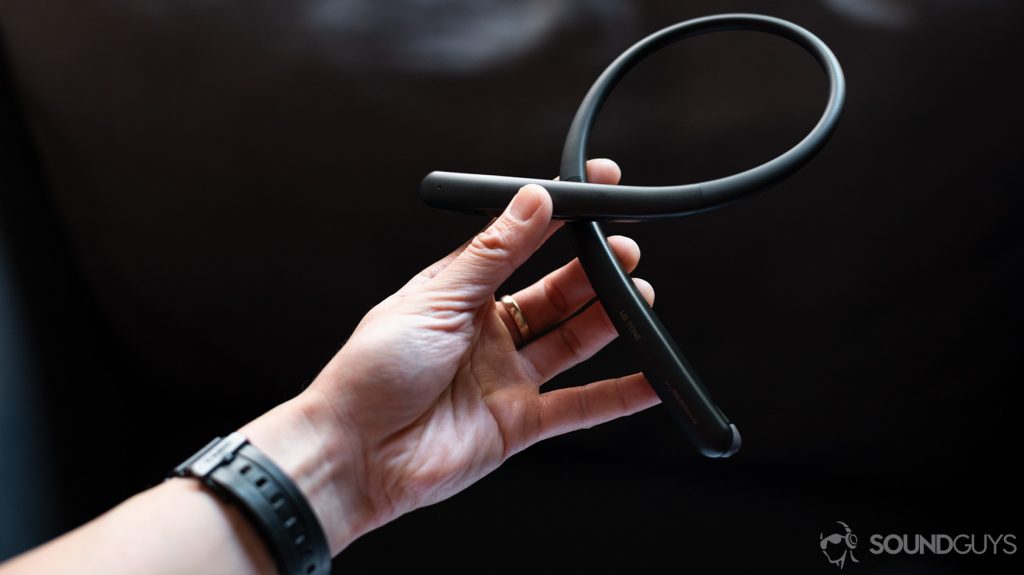 The neckband is flexible, yet durable.

What’s it like to use the LG Tone Style SL5? Thin cables connect the earbuds to the neckband, which could become an issue over time.

Earbuds without angled nozzles are a dying breed, but LG is fanning the embers with the Tone Style line. This makes finding a comfortable, proper fit difficult: after an hour or so, it was impossible to ignore the earbuds poking against the bend of my ear canal. The retractable earbuds nestle flush with the neckband’s end caps. To retract them back into the neckband, extend them as far as the cables allow and release. I was immediately struck by how thin the cables are but they’ve held up just fine.

LG provides three pairs of ear tips: small, medium, and large. For $100, I would’ve hoped to see an alternative material, like memory foam. If you gravitate toward thicker silicone or want memory foam, you’ll benefit from throwing a few bucks down for a third-party option.

This headset doesn't offer many features but is a great pick for listeners who want something easy to operate and keep track of.

A slightly rubberized material gives the neckband some flex, making it easy to pack into a confined bag. I wish the material created more friction, as the band constantly slid about while walking, unlike the RHA T20 Wireless. The left anterior side of the neckband houses a covered USB-C input, power button, and volume rocker, which lets you skip or replay tracks when depressed for one second. This arrangement is great. It’s intuitive and easy to find the buttons without blindly scavenging around. 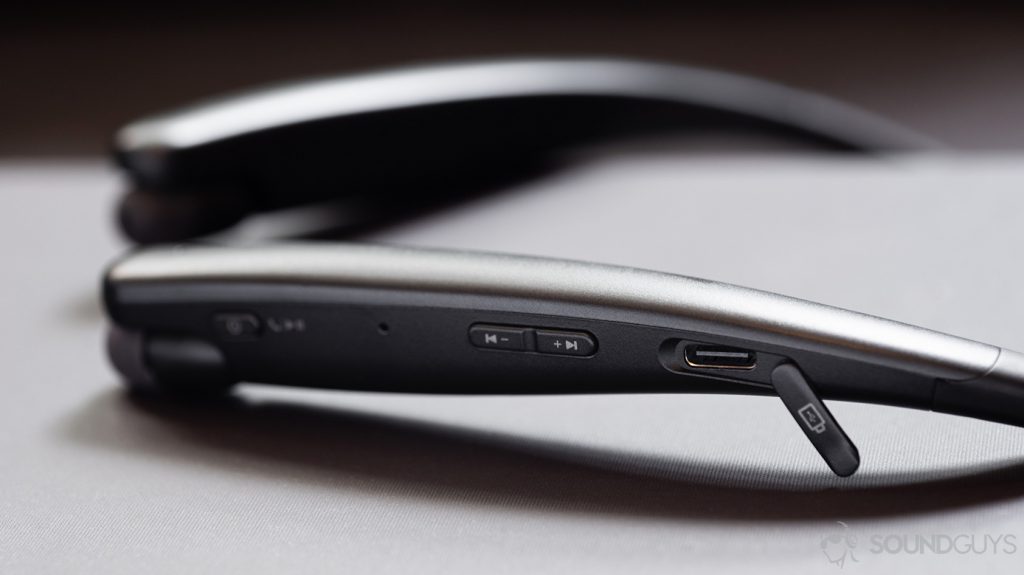 It takes about two hours to fully charge the headset, but it supports quick charging, too.

Battery life is superb: these lasted 10.1 hours, which is well beyond LG’s eight-hour playback time. The support quick charging, too: 10 minutes with the included USB-C cable juices up the headset for three hours of use. Battery life and charging performance are some of the best things about the LG Tone Style SL5 earbuds.

How do you connect it to your phone? AAC is the only compatible high-quality codec available with the Tone Style SL5.

The earbuds use Bluetooth 5.0 firmware and take just a few moments to pair to your phone. Press and hold the power button for a few seconds, and a voice prompt will notify you of the earbuds’ pairing status. From there, select the LG Tone Style SL5 from your phone’s Bluetooth menu. There’s also a quick pairing option, which isn’t the same as NFC pairing. To quick pair the headset, hold the power button for a few seconds and keep the headset within a meter from the desired source device. A prompt will appear on your smartphone asking to pair with the Tone Style SL5.

Unfortunately, high-quality Bluetooth codec support is limited to AAC, but there exists a range of neckband earbuds that do have aptX support. Multipoint functionality is supported, however, so you can connect to two devices at a time with the SL5. LG partnered with Meridian Audio to tune the LG Tone Style SL5 earbuds. Audio doesn’t come through as clearly as I expected, given the partnership. The hump in the frequency response chart, from pink to green, indicates that vocals take precedence. Male vocals sound particularly good with these earbuds and are 50% louder than cymbals. Bass frequencies are about as loud as guitar and piano harmonics, which is good for general listening but may not be enough for self-proclaimed bassheads. If that’s you, then you may want to take a moment and EQ your music.

If you’re looking for earbuds with great isolation, these aren’t them. As is typical with in-ear models, the high-pitched sounds are nullified by the earbuds. However, low-end quieting is nearly non-existent. Again, memory foam ear tips or angled nozzles would greatly improve this.

The song Colorado by Chastity Brown highlights the LG Tone Style SL5’s strengths and weaknesses. The twangy, nostalgic song opens with a steady drumbeat, guitar strums, and infrequent plucks of a steel guitar. Right off the bat, the acoustic guitar is rendered difficult to hear with these earbuds compared to the drums. Once Brown begins singing at 0:28, it takes effort to pay attention to the acoustic guitar, relative to the other accompanying instruments.

While the auditory masking is undeniable, Brown’s vocals sound excellent. During portions of the chorus, a backup singer harmonizes with Brown’s melody, and both voices are distinct and audible. I was surprised to hear the harmony and expected it to be masked by lower notes from the drums. The microphone is just okay. Unless you have a high-pitched voice, you’ll likely sound distant or muffled to the person you’re speaking with. While the dual-microphone technology sounds impressive, it’s unable to evenly reproduce the human voice’s frequency range. Most voice’s fundamental frequencies are lower than 400Hz, but the SL5 microphones attenuate this range. What’s more, motion from the cables is picked up and relayed through records as heard in the example below.

Should you buy the LG Tone Style SL5? The LG Tone Style HL5 isn’t feature packed but if you want something reliable and convenient, this is an affordable pick.

If a barebones neckband wireless headset is all you want, then the LG Tone Style SL5 is the best pick for your needs. It offers little in the way of features but performs well in most regards. Again, I would’ve preferred a more rubberized texture on the flexible portion of the neckband and angled nozzles, but the retractable feature works flawlessly.

Alternatively, the Plantronics BackBeat Go 410 currently retails for $99 and affords even more features than the Tone Style SL5. You get noise cancelling technology, sweat-resistance, and the option for wired listening if the battery dies unexpectedly. As a matter of fact, it’s our number one pick for the best wireless neckband earbuds.

How do I pair these to my phone?

Press and hold the power button for a few seconds, and a voice prompt will notify you of the earbuds’ pairing status. From there, select the LG Tone Style SL5 from your phone’s Bluetooth menu.