A very comfortable pair of earbuds that are ultimately unremarkable.

The LG TONE Free HBS-FN6 is a gem among a sea of AirPods-look-alike duds: the buds are IPX4-rated, and the silicone ear tips are very comfortable. Unless you’re regularly sharing earbuds, the UVnano charging case isn’t much to gloat about, but the sound quality is great for consumers looking for relatively accurate audio reproduction. For the price, these aren’t the best deal, and we recommend getting the non-UVnano case version, or considering the Samsung Galaxy Buds Plus, among other alternatives.

The LG TONE Free HBS-FN6 is simple to use, and does as its name promises: frees users so they may go about, uninhibited by cables. LG kept it simple all the way down to the color variants—black or white. In a time when true wireless earphones are being dropped in droves, is Meridian Audio tuning enough to make LG’s buds shine, or will they grow cold in the shadow of their direct competition?

Who should get the LG TONE Free HBS-FN6? The earbuds take on a familiar shape to much of the competition. 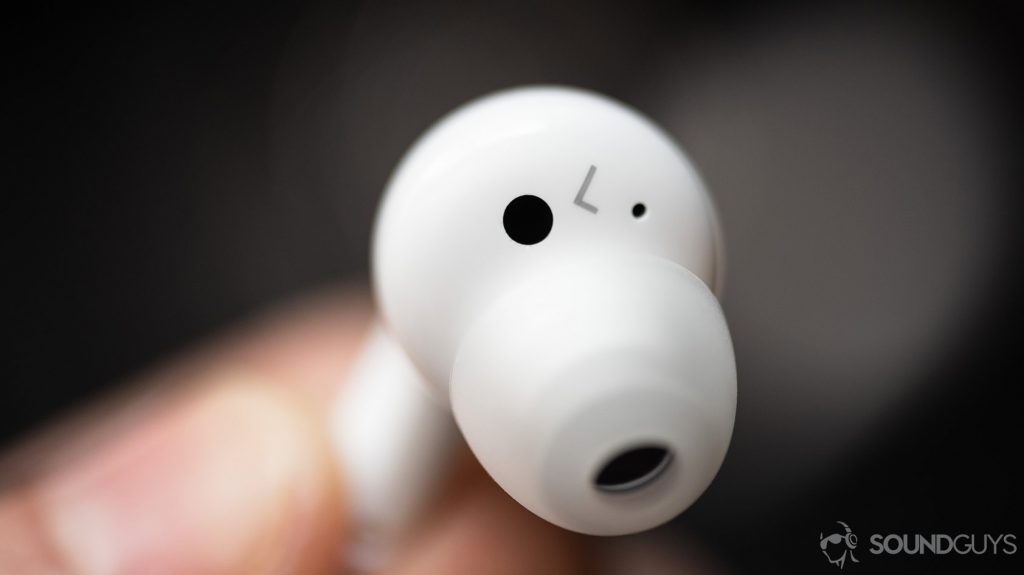 Automatic ear-detecting sensors force your music to pause when the buds are removed, but you must manually resume playback via onboard controls or your phone.

LG’s perfectly circular charging case hides scratches and scuffs well, and features a toned down design—though not as minimal as the Apple AirPods. A long indentation along the seam made it easy to open the case, even single-handedly. To manually pair the headset, you’ll have to inch your thumb to a button offset from the LED indicator, both of which are nestled below the case’s seam.

Opening the case leaves a greater impression than the exterior design: two blue-tinted LEDs momentarily alight the silicone ear tips. No matter how many times I opened the case, the blue glow consistently impressed me. The blue lights, however, are purely decorative and have nothing to do with the UVnano technology.

These rival the Samsung Galaxy Buds Plus as the most comfortable earbuds around.

UVnano technology is just LG’s version of two UV lights that were tested by TÜV SÜD, and proven to kill 99.9% of Staphylococcus aureus (S. aureus) and Escherichia coli (E. coli) bacteria. For this to work, close the lid for 10 minutes to complete the UV exposure cycle. This is dandy, and could even aid in preventing ear infections, but we still recommend physically cleaning your earbuds on a routine basis. Doing so will remove physical debris that may catch in the nozzle mesh, or find its way into your ear canals. 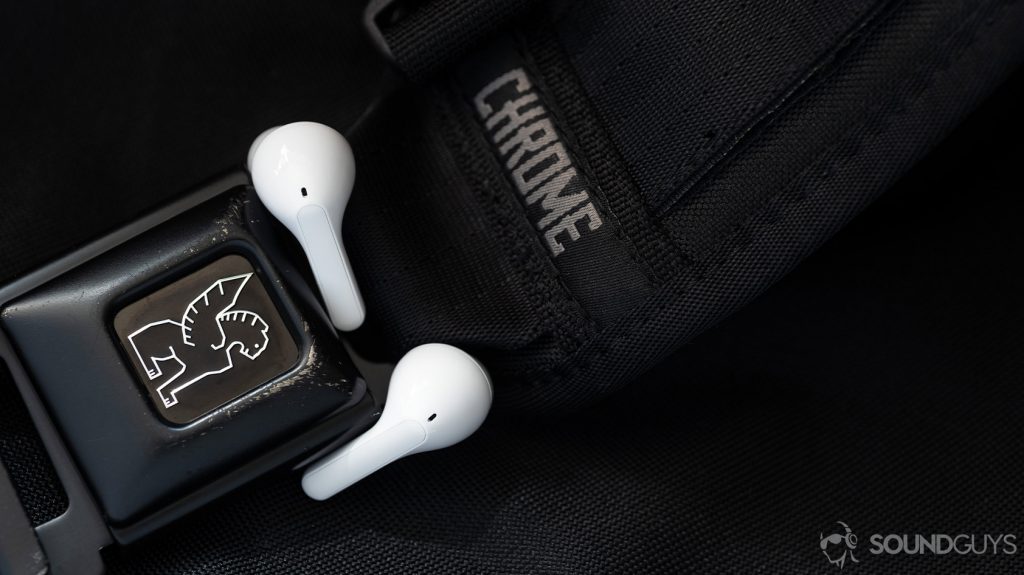 Only the very top of the stem may register touch commands.

The earbuds feature dedicated nozzles and silicone ear tips (small, medium, large), and the ear tip material is extremely comfortable. I wore the earbuds until the batteries died without any signs of discomfort. Each earbud has a touch panel which only consists of the upper-quarter of the stems. This small area led to a lot of misfires, especially when walking around. I mean a lot: eventually, I stopped relying on the touch controls and used my phone instead.

Should you get the LG TONE Free app?

The LG TONE Free app offers immediate access to firmware updates, no matter what operating system you use. This is important for wireless headsets, because it elongates the lifecycle of a given product and convenience tweaks along the way. Its layout is easy to understand, and the user manual is front-and-center for you to refer back to anytime.

In order to enable Google Assistant access, you must get the LG TONE Free app.

Other features include equalizer settings: you can choose from four Meridian presets (Immersive, Bass Boost, Natural, Treble Boost), or create two of your own presets. You may also choose between three degrees of ambient passthrough intensity, adjust the volume, remap the touch controls, and lock the touchpads altogether. Incoming notifications can also be read aloud, but you must enable systems permissions for data collection. 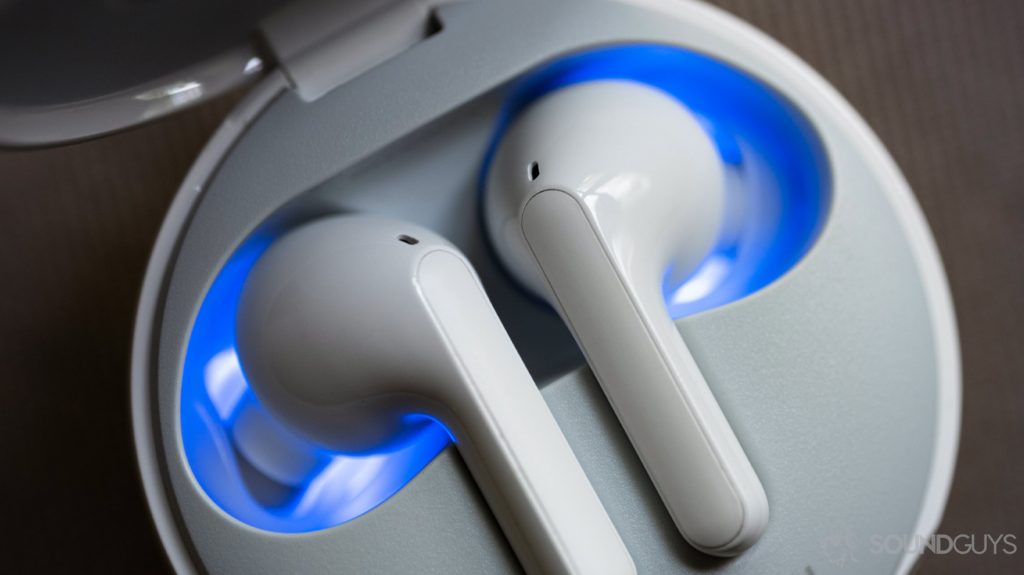 The inside of the case lights blue for a few seconds every time it’s opened.

Bluetooth 5.0 firmware doesn’t guarantee perfect wireless performance, as demonstrated by the LG TONE Free HBS-FN6: when I was outside the connection hiccuped a few times every hour. Another drawback, albeit an unsurprising one, is the lack of  Bluetooth multipoint support. You may only connect to one device at a time, and switching must be done manually. 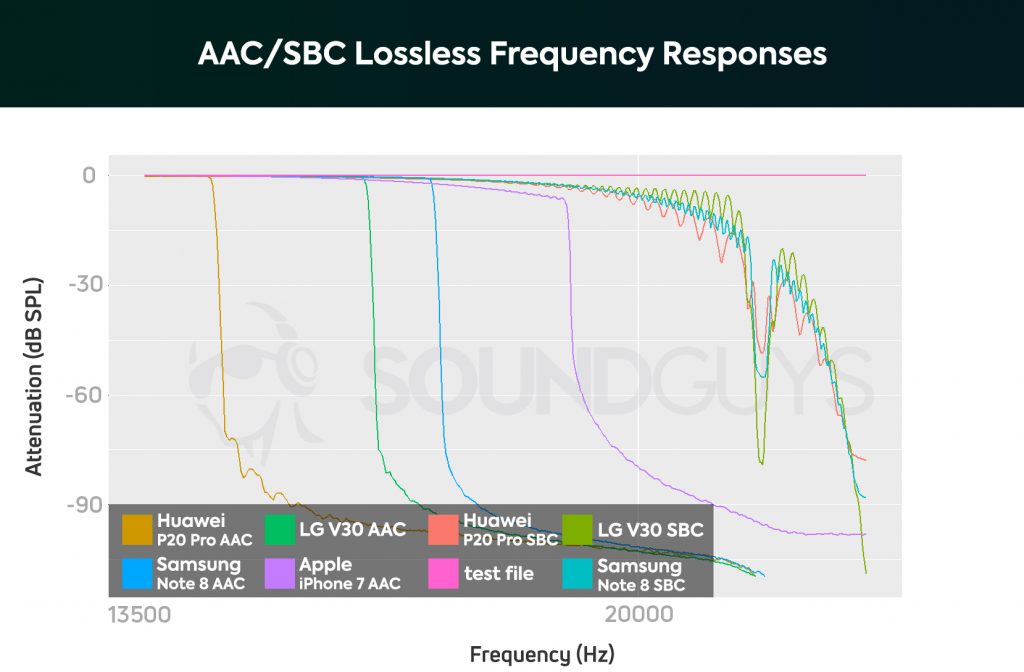 Android phones don’t give you CD-quality playback with AAC.

High-quality Bluetooth codec support is limited to AAC, and this works very well with iPhones but not so well with Androids. We have an entire breakdown of why headsets that only support SBC and AAC shouldn’t be used with Android, but in sum, it’s not the codec’s fault. Instead, Android doesn’t efficiently decode AAC which leads to latency, inconsistent streaming rates, and the introduction of unwanted noise (compression artifacts) into your music.

This won’t ruin your experience by any means, especially if you have older ears or have attended many concerts sans-earplugs. Even still, it’s hard to discern the difference between Bluetooth codec qualities unless you’re in ideal conditions. Anyone Android user who fancies themself a critical listener won’t be satisfied with just AAC support.

We subjected the earbuds to our standard battery test, a constant 75dB(SPL) output, and they lasted exactly 5 hours, which is one hour short of the specified 6-hour playtime. The earphones may be fast charged: five minutes in the case yields one hour of playtime, and the USB-C charging case provides an additional two charge cycles.

In total you should get anywhere from 15-18 hours of use from the LG TONE Free HBS-FN6 before you need to search for a USB-C cable. You may also use any Qi wireless charger to top the case up, but doing so will likely be slower than by cable. Interestingly, I was able to charge the case atop my Samsung Galaxy S10e with Wireless PowerShare enabled. 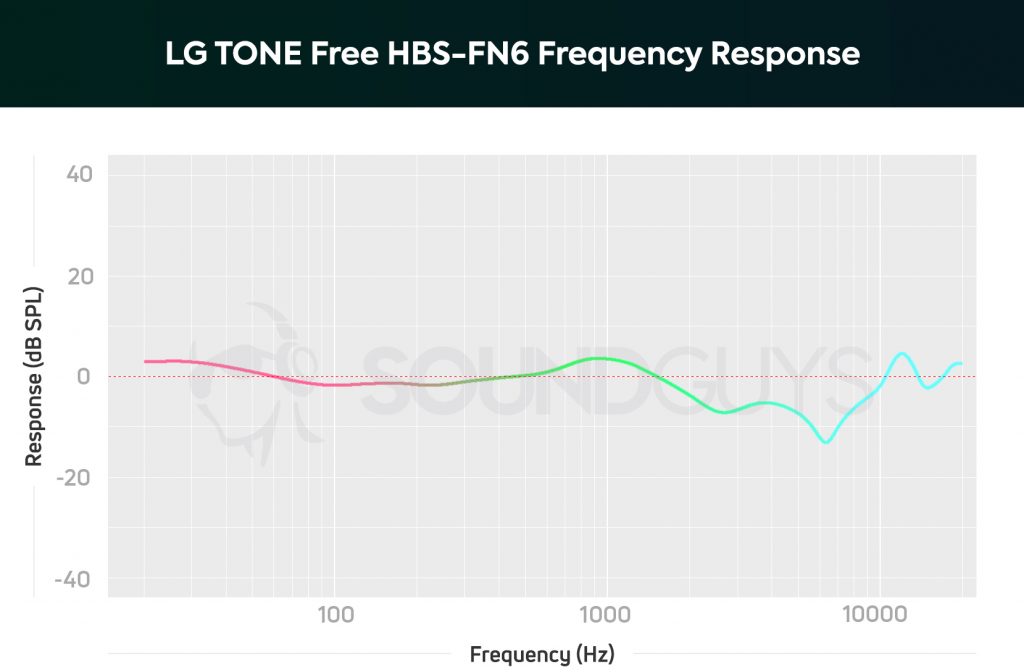 The neutral-leaning sound signature may be off putting to bass-thirsty consumers.

Meridian Audio did a very good job tuning these earphones for the audio enthusiast. More casual consumers accustomed to bass-heavy sound signatures won’t be pleased with what may be miscategorized as “non-existent bass,” when in reality, the bass notes are accurately rendered. The problem is that we consumers are trained to consider a 5-15dB bass emphasis normal, so when we encounter accurately reproduced low notes, our brains perceive it as woefully inaccurate. All this is to say, the LG TONE Free HBS-FN6 sound very good and handle a variety of music well; though, clarity isn’t quite as good as a $169 price tag may suggest.

To read the frequency response chart accurately there are a few things to understand: the dotted red line extending from the 0dB(SPL) mark represents the platonic ideal. If all frequencies were relayed accurately, the frequency response line would be a flat. Most of us prefer something other than the ideal though: it’s deemed more exciting, which is where deviations (emphasis and de-emphasis) come into play. 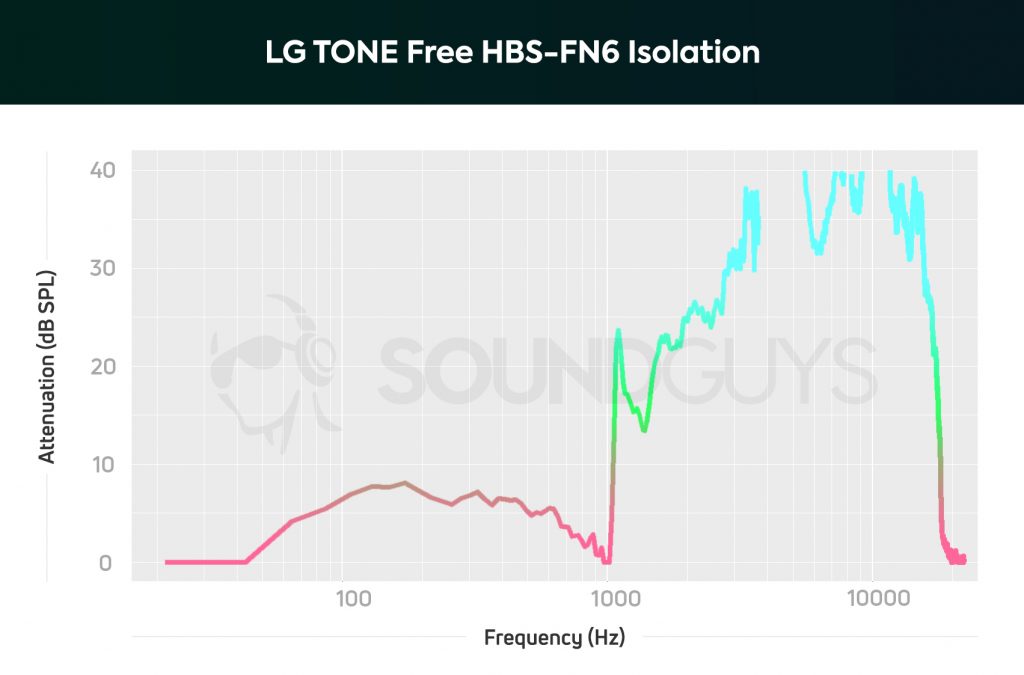 Isolation is above average for a pair of in-ears, and background conversations are essentially muted.

The sub-bass emphasis barely hits the threshold of perceptibility, but affects that tangible oomph we so enjoy in pop and hip-hop genres. A more significant bump around 1kHz brings out vocal and instrumental resonances, making it easier for us to perceive detail. That dip from 1.5-10kHz: don’t worry, because it’s a very common feature of headphones and earphones to combat unwanted harmonic resonances within your ear canals. These notes can be irritating to the human brain, and are sometimes amplified when a proper seal is created, something these buds are very good at forming.

Passive isolation is good and can be attributed to the angled nozzles and malleable ear tip material. It never took effort to get a good fit with these earbuds; it just happened, every time. If the pre-installed medium ear tips don’t work for you, try out the alternatives. Doing so is well worth it because it improves audio quality and can even protect your hearing: you’re less likely to increase the volume to dangerous levels if the ear tips create an effective barrier between you and the outside world.

The song Uncharted by Sara Bareilles begins with a popular F-C-G-Am intro on the piano, and these chords come through clearly in the first verse without masking Bareilles’ vocals. I appreciated the light touch on bass alterations when listening to Uncharted: the slamming of Bareilles’ fingers to play the F chords in the second half of the first verse resonates loudly, as it should, without impeding the reproduction of her voice.

Minor auditory masking occurs during the choruses, as is to be expected during particularly racketous portions of a song. To hear this, skip ahead to 1:44: it becomes nearly impossible to hear any detail from the secondary electric guitar because of how the kick drum, vocals, and main guitar mask it. Cymbal hits can also be difficult to perceive which may be heard during the end of the third verse (2:26).

Can I use the LG TONE Free HBS-FN6 for phone calls? 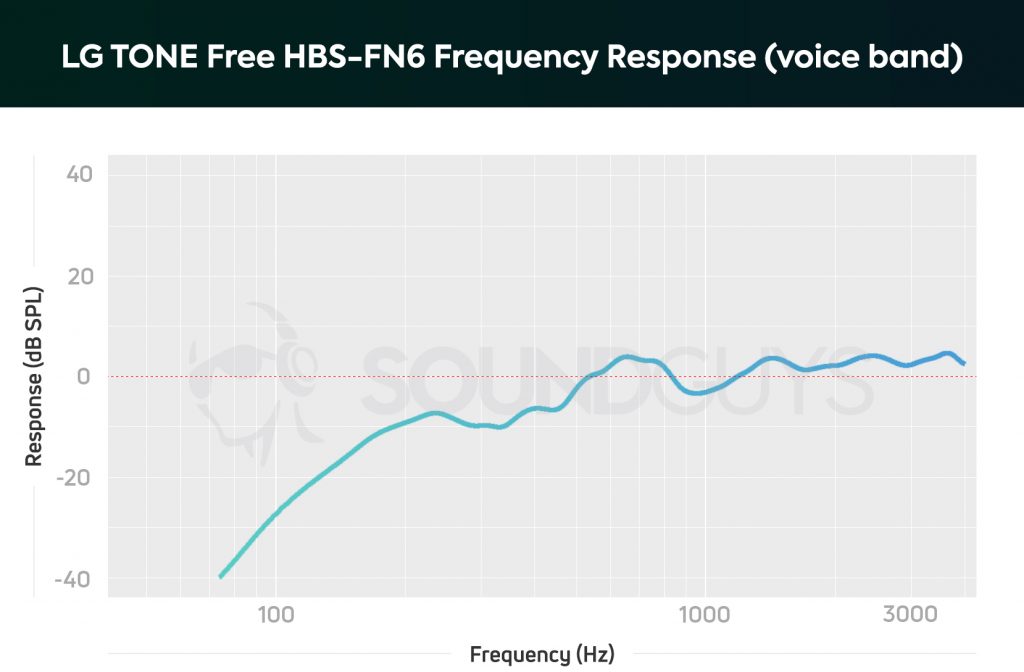 The microphone system does a pretty good job of transmitting vocals, but also relays background noise.

Yes, LG outfitted each earbud with a dual-microphone array for clear vocal transmission, and it relays fine audio. The microphones strategically de-emphasize low-frequency notes to combat the proximity effect. While this is good because it prevents bass notes from clipping, it also can make very low registers sound “hollow.”

There is one major problem with the microphone system, though: it fails to reduce background noise. When on the phone with my mother, she noted that my placing of scissors in a wooden drawer sounded as loud as my voice. Keep this in mind if you’re a multitasker when you take calls.

Should you buy the LG TONE Free HBS-FN6? 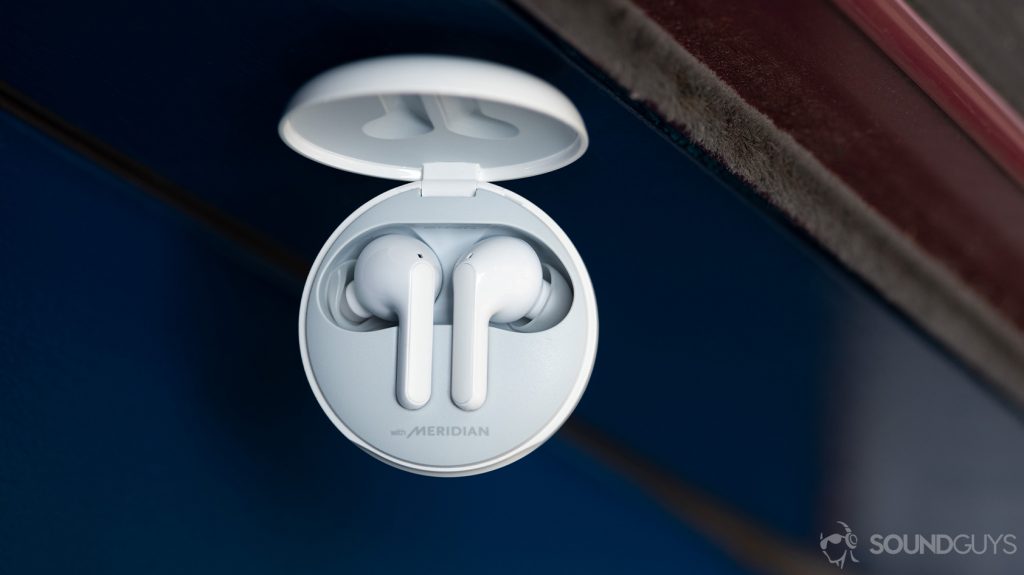 The earbuds aren’t a very good deal, but they are a good deal comfortable.

If you’re a fan of LG’s design and trust its products, then yes, the LG TONE Free HBS-FN6 is a good buy. The UVnano charging case, while cool, won’t replace the need to scrub the earbuds, but is good for those who need some peace of mind. Ultimately, the reason anyone should buy these earbuds is for their sound quality and comfort. Critical listeners who want something portable will enjoy what the LG TONE Free earbuds offer, despite the lack of aptX streaming.

Maybe LG’s true wireless earphones don’t appeal to you, that’s fine. We’re living in a golden age of true wireless earbuds, and two great alternatives to the LG TONE Free HBS-FN6: the Samsung Galaxy Buds Plus and Anker SoundCore Liberty Air 2, both of which are more affordable than LG’s buds. The Samsung Galaxy Buds Plus are cheaper than the LG TONE Free, and more versatile.

The Samsung Galaxy Buds Plus are even smaller than LG’s and are tuned by AKG, another famed audio company. Its high-quality Bluetooth codec support is also limited to AAC, but Samsung Galaxy smartphone owners will benefit from the proprietor scalable Samsung codec. Microphone quality is better with the Galaxy Buds Plus, and the touch controls have the opposite problem: they’re a bit too sensitive.

Even cheaper are the Anker SoundCore Liberty Air 2 true wireless earphones which also feature a stemmed design with touch panels. The touch controls are a tad more responsive than what I experienced with the LG TONE Free headset. Anker SoundCore’s buds are the only ones listed to include aptX support; though, the default sound signature strays the farthest from accurate. It’s bass-heavy sound is noticeable, but easily mitigated in the SoundCore application. The earphones are IPX5 water-resistant, and like all the buds discussed in this LG TONE Free HBS-FN6 review, the Liberty Air 2 support quick charging.