Apple is in the air.

By Sonos
Check Price
The Sonos Move is the perfect AirPlay 2-equipped speaker for the home, offering great sound underneath its minimalist design.
View Full Review
7.8

By Libratone
Check Price
For high-quality audio streaming on-the-go, the Libratone Zipp 2 is perfect—sporting a compact design that delivers powerful sound in all directions.
8.2

By Marshall
Check Price
With support for Amazon Alexa and the Google Assistant, in addition to AirPlay 2 support, the Marshall Uxbridge Voice has the potential to be your next smart speaker.
8.3

By Apple
Check Price
If you're already invested in Apple's walled garden, and have a subscription to Apple Music, you'll get the most out of the company's smart speaker.
View Full Review
9

By Sonos
Check Price
If you're willing to splurge on a soundbar, the Sonos Move is one of the best out there: featuring AirPlay 2 support, adaptable tuning via Trueplay, and voice assistant integration.

If you want the best wireless audio streaming solution in your home, you’re better off using a Wi-Fi speaker system. Unlike Bluetooth, audio streaming over a network allows for higher data transfer rates. Apple AirPlay is one of the most reliable wireless streaming technologies available, with support for it increasing over time. If you’re eager to join in on the move towards network-based content streaming, take a look at this list of the best Apple AirPlay speakers currently available.

The best Apple AirPlay speaker is the Sonos Move

Sonos is best known for making high-end audio products that deliver great sound with a sleek design—if you’re willing to drop some serious cash. The Sonos Move is no exception. This is Sonos’ attempt at a portable speaker, featuring a more compact build in comparison to other speakers from the company. It sports an IP56 water and dust-resistance rating that allows this speaker to go anywhere—from the comfort of your living room to your backyard. While the Sonos Move is meant to be a portable, its handle design and overall heft make it quite difficult to carry around. This speaker is better suited for home use rather than your next road trip.

As a Wi-Fi based speaker, the Sonos Move supports AirPlay 2, so you can stream high-quality audio straight from the Sonos Move. For other devices, such as Android smartphones, the Sonos Move still supports Bluetooth connections, though you’re limited to streaming audio using Apple’s AAC codec.

Whatever connection method you use, the sound coming out of the Sonos Move can be best described as “consumer friendly,” with an emphasis in the low-end as you’d find in other speakers. This allows for great bass reproduction, especially when you’re listening to music outdoors. Just be careful not to push the volume of the Sonos Move over the edge, as this can lead to duller-sounding highs.

Related article: What is frequency response and how does it affect my music?

What you should know about Apple AirPlay

AirPlay is a wireless content streaming protocol developed by Apple, letting you stream audio and video across a shared network. Seeing as this technology is proprietary, content can only be streamed from compatible devices: Windows machines streaming via Apple Music, Mac computers running macOS Catalina, and iOS devices running 11.4 or later. Receiver units, such as speakers and TVs, must have the label “Works with Apple AirPlay” on its packaging to verify its compatibility.

Is AirPlay better than Bluetooth?

In short, yes. This is because AirPlay uses a Wi-Fi connection for greater transfer rates via the Apple Lossless Audio Codec (ALAC), which supports eight channels of audio at 16, 20, 24 and 32-bit with a maximum sample rate of 384kHz. Unfortunately, Bluetooth doesn’t share the same luxuries as Wi-Fi, with transfer rates ranging from 320kbps (SBC) to 990 kbps (Sony LDAC).

Because AirPlay is proprietary technology, there aren’t a lot of compatible devices currently on the market. While compatibility is continuing to grow, AirPlay-compatible devices tend to cost more than traditional Bluetooth speakers, which may deter some budget-conscious consumers.

AirPlay vs. AirPlay 2: what’s the difference?

Apple AirPlay 2 allows you to stream to multiple speakers in your house.

Apple AirPlay 2 was announced in 2017, and features multi-room functionality and HomeKit support. Multi-room audio allows you to play music from a single speaker or to any other device throughout your house—all from a single device. You can even choose different songs to play on each speaker in your home, though this requires a subscription to Apple Music.

HomeKit support gives you the ability to automate your speakers by adding them to rooms or scenes. For example, when you come home from work, you can configure HomeKit to turn on your lights, adjust the temperature, and put on a soothing track over your AirPlay 2 speakers.

Other enhancements included with AirPlay 2 include uninterrupted playback when you receive calls, shared playlist compatibility for Apple Music subscribers, and multi-device streaming support.

Use AirPlay anywhere with the Libratone Zipp 2

If portability is at the top of your priority list, the Libratone Zipp 2 is a great option—it supports AirPlay 2 and 360° sound, wrapped in a cylindrical body that can be easily carried around.

The Libratone Zipp 2 produces decent sound quality with its mono speaker that delivers audio in all directions. The mids are slightly de-emphasized which can result in a lack of oopmh; though, most speakers lack a proper sub-bass response, which is why so many home theater setups require subwoofers. Worst-case scenario, you can always adjust the EQ through the Libratone app. With the app, you’ll also get access to features such as firmware updates, volume controls, and management tools for connected devices.

This speaker is equipped with a host of connectivity options, including AirPlay 2, Bluetooth, and a 3.5mm input, so non-Apple users can take advantage of wireless functionality.Other features that make the Libratone Zipp 2 a worthwhile option include a 12-hour battery life, Amazon Alexa integration, and Spotify Connect support.

Marshall’s audio products are trademarked by their signature guitar cabinet-inspired designs. The Marshall Uxbridge Voice is a speaker that follows the company’s tradition of offering a product that looks and sounds like it was designed for audiophiles. As its name suggests, one of the speaker’s main selling points is its voice assistant integration. Whether you go for Amazon Alexa or the Google Assistant, the Marshall Uxbridge Voice is bound to be one of the best smart speakers you’ll ever use. With its dual far-field microphones, the speaker will be able to register your commands—whether you’re on the other side of the room, or trying to talk over your music.

The sound from the Marshall Uxbridge Voice packs a punch, despite its small form factor. Bass notes are relayed clearly but this can result in auditory masking that makes it hard to perceive upper-midrange and treble notes. Fortunately, bass and treble can be adjusted using the controls found on the top of the unit.

The Marshall Uxbridge Voice supports both AirPlay 2 and Bluetooth connections, though it lacks any wired input options. If you’re really looking for a future-forward smart speaker that does away with wires, except for the power cable, this speaker is definitely worth picking up.

Apple users should get the Apple HomePod

You can’t expect to go through an article about AirPlay without mentioning the HomePod. If you’re already heavily invested in Apple’s ecosystem, commit even further with the company’s very own smart speaker. 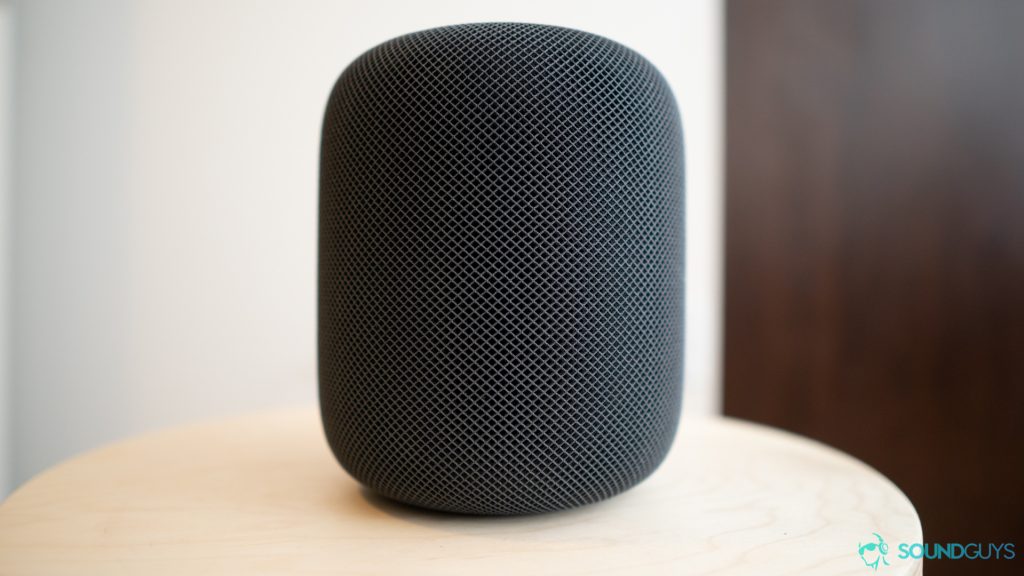 Over the years, Apple has gained plenty of experience when it comes to making great-sounding products—and it shows with the HomePod. Similar to the Google Home Max, the HomePod features a self-correcting EQ, using its integrated microphones to adapt its sound to your listening environment. This helps the HomePod produce a sound that allows the bass to come through the mix, without overwhelming higher-frequency noises like vocals, stringed instruments, or even synth leads.

When it comes to being a smart speaker, the HomePod uses Siri, which isn’t the smartest assistant available. Apple has yet to update Siri with the ability to answer informative questions at the same level as Amazon Alexa or the Google Assistant.

Related: What is a smart speaker, and what makes it great?

To get the most out of the HomePod, you need to use an iOS device. In fact, you can’t even set up the speaker without one. On top of that, you’ll need a subscription to Apple Music to get access to features like hands-free control via Siri. Apple plans to support third-party streaming services like Spotify, though details are still up in the air.

The Sonos Beam is one of the most popular soundbars on the market: it features a minimalist design that fits comfortably underneath many home entertainment setups.

Despite its slim figure, the Sonos Beam delivers a powerful sound with accurate bass reproduction that doesn’t mask the mids and highs. Upon setup, you’re prompted to use Sonos’ Trueplay system, which uses your iPhone’s microphone to adjust the sound of your speaker according to your listening environment. Unfortunately, this feature is not yet supported on Android. However, once you’re up and running, you’re in for an enjoyable listening experience—whether you’re watching a movie or jamming to your favorite playlist.

The Sonos Beam is a Wi-Fi based speaker, though it can be connected to your home network via Ethernet, if you so desire. While AirPlay 2 is supported, there is unfortunately no option to connect to the speaker via Bluetooth. Voice assistant integration is also included with the Sonos Beam, with your choice of using either Amazon Alexa or the Google Assistant. 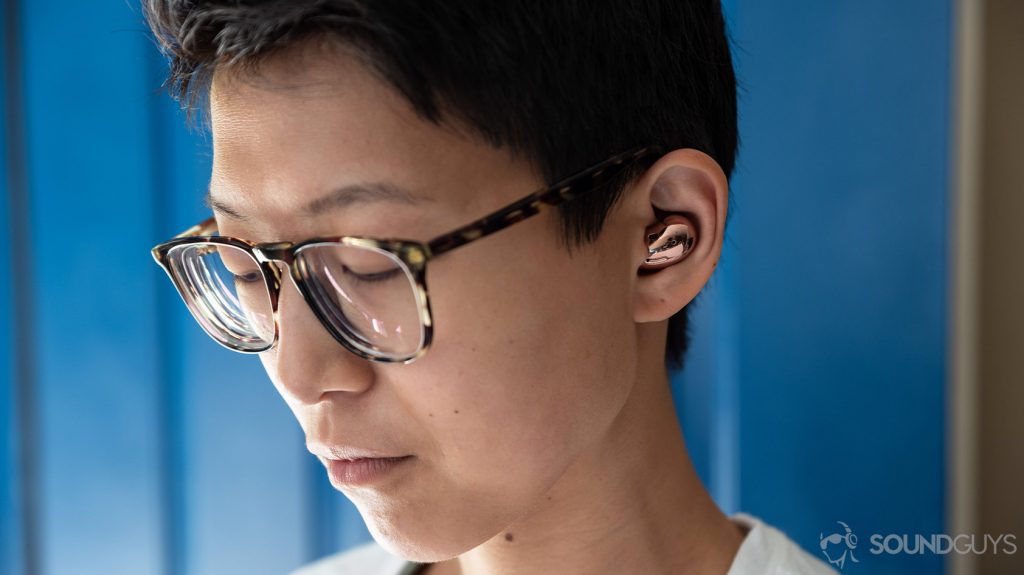 Next article: Best Bluetooth speakers of 2020