The battle between the two music streaming giants.

When it comes to the best music streaming services, Apple Music and Spotify immediately come to mind—which isn’t surprising, considering they lead the competition in regards to the number of paid subscribers. Sporting different feature sets that cater to specific users, it can be difficult to choose between the two. Let’s dig a little deeper into Apple Music vs Spotify to see which is the right music streaming service for you. Spotify Music is one of the most popular streaming services around.

First things first, it’s worth mentioning that neither Apple Music or Spotify will provide you with audiophile-grade streaming experience. If audio quality is at the absolute top of your priority list, look into HiFi streaming services such as Tidal.

Apple Music streams content at 256kbps utilizing the AAC audio format and streams via one high-quality Bluetooth codec: AAC, which is far more efficient than most other open-source lossy alternatives. By default, Apple Music will stream at the highest quality possible and will reduce quality when streaming using cellular data. However, this quality throttle can be disabled in the settings.

On the other hand, Spotify has its streaming quality set to automatic by default, adjusting depending on your connection strength—whether you’re on Wi-Fi or cellular data. The app streams audio using the open-source Ogg Vorbis codec at up to 320kbps for Spotify Premium users, and up to 160kbps for people with a free account.

The streaming quality from both services is sure to satisfy casual music listeners. However, if you’re someone who lives in an area with an unreliable internet connection, you’ll appreciate Spotify’s variable streaming quality options for an uninterrupted playback experience. If you don’t want to have to worry about needing to alter stream quality due to data constraints, Spotify also lets Premium users download and save up to 10,000 songs at a time on up to five different devices. Downloaded music can be saved at the same bitrate options as streaming—up to 320kbps.

Both Apple Music and Spotify offer a large collections of songs, albums, and playlists.

When it comes to music content libraries, there’s no beating Apple Music. With over 60 million songs, you’ll be sure to find music from the artists you love, and from artists you have yet to discover. Moreover, Apple Music is well-known for making exclusive deals with artists like Drake and Taylor Swift for early content release. This is exclusive content is due in large part to Apple’s paid-only service; users are required to have a paid subscription after the three-month free trial. On top of the exclusive content, users have access to many on-demand radio shows, including Beats1.

While Apple Music may have more content, Spotify’s music catalog is still extensive with over 50 million songs, with around 40,000 being added everyday. Unlike Apple Music, Spotify also offers podcasts, with over 700,000 currently on the platform. Over the years, Spotify has been diversifying their content library to become the ultimate audio streaming application, which is why the company has gone to great lengths to secure big name podcasters like Joe Rogan.

There’s no beating Spotify when it comes to recommendations

Spotify is well-known by consumers for its ability to recommend songs based on your listening history. Sure, Apple Music’s human-curated Stations allow users to discover new music, though it doesn’t quite compare to the magic behind Spotify’s recommendation algorithms.

Over the years, Spotify has refined its algorithms to help you discover songs based on your music tastes.

At the bottom of every playlist, you’ll see recommendations for new songs based on what’s in your list. You also get custom playlists such as Discover Weekly, which automatically generates hours worth of new music for you to discover based on your listening patterns. Spotify also includes a collection of hand-picked playlists featuring the latest hits, which are automatically reorganized for each user according to their tastes.

Apple Music’s For You feature automatically generates song recommendations based on your favorite genres and artists.

To Apple’s credit, it does have a dedicated For You tab that is full of generated song recommendations, similar to Spotify. Although the initial survey seems visually striking, it feels quite cumbersome to use. You have to long-press on genres or artists you don’t like; then, either tap or double-tap artists you like—as opposed to searching artists and genres to add them to a list. All of this can become infuriatingly time consuming to users. In fact, there’s a weird bug I encountered using iOS 13.5.1 where adding a new artist in the setup process crashes the entire app, forcing me to start over with the setup.

Alternatively, you can also take songs, albums, and playlists and create Stations, automatically generating a list of similar songs—including everything from hits to hidden musical gems. Spotify also has this feature, though most people opt to use the platform’s Discover Weekly playlist to find new music.

Spotify’s clean user interface puts your content at the forefront before giving you recommendations.

When it comes to music streaming apps, Spotify has the best user interface—which is surprising considering Apple is typically the king when it comes to design. In this case, Spotify’s app layout is much cleaner and better organized than Apple Music.

Spotify’s UI is laid out in a way that gives you instant access to your own content. The home page shows your recently played songs and playlists, which is what most people want to see when opening a music app. Every part of Spotify’s design puts your content at the forefront, only providing you with suggestions after you’ve seen what you wanted to see. 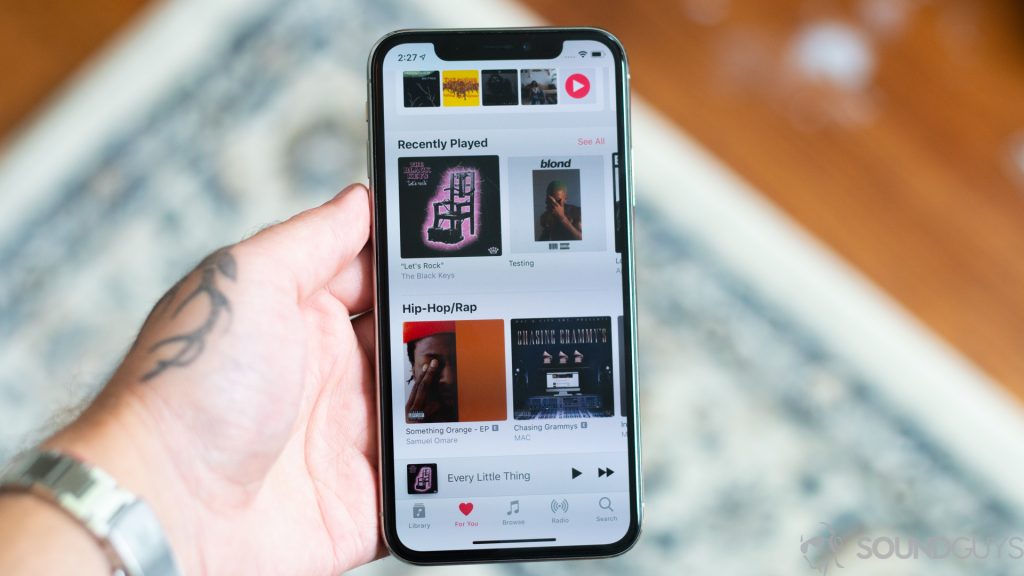 Apple Music’s interface is intuitive, but can look cluttered at first.

Apple Music is also well-designed, though it can come across as overwhelming with all the different tabs at the bottom of the screen. It seems like Apple wants to show off all the features at first glance, though this tends to get in the way of accessing your content. Apple Music’s interface divides its features into separate sections, rather than integrating them into a single scrollable page like Spotify. The large, colorful artwork plays into Apple’s design aesthetics, making Apple Music—like the company’s other apps—quite pleasing to the eye.

With Apple Music, you can search for songs using lyrics.

In terms of search functionality, Apple Music outshines Spotify for one main reason: Search by Lyrics. How many times have you wanted to listen to a song only to remember the lyrics and not title? With Apple Music, you can forgo Googling and type your lyrics directly into the app’s search bar. You’ll then be presented with the song with a small excerpt showing the lyric you searched—talk about convenience.

Both Apple Music and Spotify have recently added on-screen, karaoke-style lyrics to their apps. Gone are the days when you’re jamming to your favorite song, only to forget the lyrics and switch into a freestyle mumble.

The presentation of on-screen lyrics on Apple Music (left) is much more eye-catching compared to the approach taken by Spotify (right).

While Spotify’s inclusion of on-screen lyrics is nicely integrated into the Now Playing screen, Apple Music’s full-screen presentation of the lyrics just seems more attractive with its bold text and pleasing gaussian blur background; like a classier-looking karaoke machine. You even have the option to scroll through the lyrics and jump to a specific line in a song.

Take control of your sound with EQ

If you’re someone who likes to fine tune their listening experience, you’ll enjoy Spotify’s inclusion of a graphical equalizer, allowing you to tailor the sound of your music to your tastes. The app also includes several EQ presets for you to choose from, if you so desire. Android-owning Spotify users will be bumped into their phone’s system audio settings to EQ the sound, which may impact audio in other apps.

On the other hand, Apple Music doesn’t really offer any extensive EQ functionality. In fact, all you get are a list of EQ presets to choose from, which are only available to iOS users via the Settings app.

Spotify is better for use with voice assistants 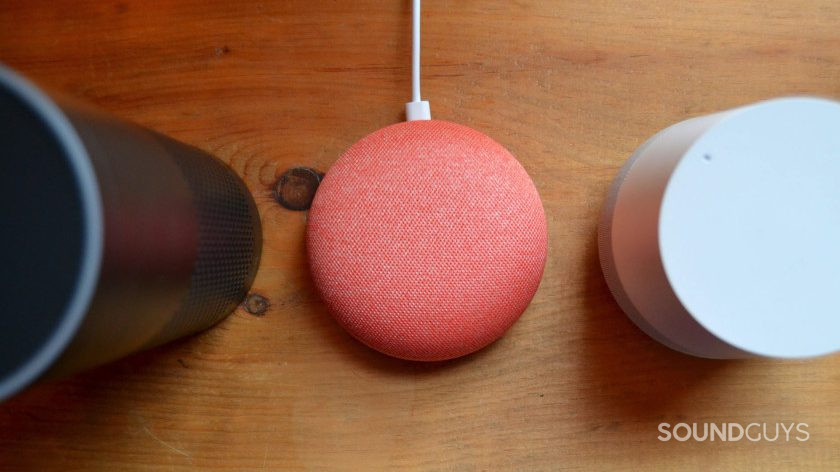 Spotify is compatible with many voice assistants, including Amazon Alexa and Google Assistant.

If you use a voice assistant in your daily life, whether it be through a smartphone or smart speaker, Spotify has you covered. The platform is supported by most, if not all voice assistants—including Amazon Alexa, Google Assistant, and Apple’s Siri. Yes, you read that right. Even Siri supports Spotify. Do note that voice assistant integration requires a Spotify Premium subscription.

On the flip side, Apple Music is quite lacking in terms of voice assistant functionality, with only Siri having full support for the platform. Unless you’ve got a HomePod or any other Siri-enabled device, don’t expect to stream your Apple Music playlists using your non-Apple virtual assistant.

Both platforms make it easy to share music with your friends and family. With either app, you can share songs on your Instagram story, or even send a direct link on your social media platform of choice. While this is certainly useful, Spotify has a couple of tricks up its sleeve that give it a leg up over Apple Music.

For starters, Spotify gives you the option to create Collaborative Playlists, allowing you and your friends to make the perfect playlist for a Friday night in, or a Saturday night out. You also have the ability to quickly share songs and playlists through Spotify Codes, which can be generated and scanned within the app itself. Apple Music doesn’t yet support collaborative playlists, but does support playlist-sharing.

Spotify and Apple Music both offer pricing options comparable to one another. An individual Apple Music plan costs $9.99/month, which is the same as Spotify Premium’s $9.99/month rate. For alternative plans, find the tables below:

Unlike Apple Music, Spotify allows you to use the service for free with a few caveats. Music can be played in shuffle mode you’re limited to skipping songs up to six times per hour. Recently though, some have reported a bug that allows free users to skip songs as many times as they want. Spotify has yet to comment on the matter.

Comparing the prices, it seems that both services offer a great value for money and you can’t go wrong either way. If you’re a student, Spotify may appeal more to you with its inclusion of non-music streaming perks like Showtime and Hulu.

Apple Music vs Spotify: Which is better? Spotify and Apple Music are similar streaming services, but Spotify has a leg up especially for those who live with their partners.

After comparing these two streaming services, it’s safe to say that neither Apple Music nor Spotify Premium is better than the other. Whichever platform you choose depends on your own wants and needs. If you’re someone who avidly uses Apple devices in their daily life, you’ll appreciate Apple Music’s familiar UI design language, Siri support, and automatic synchronization across Apple devices.

On the other hand, Spotify has always been designed with cross-compatibility in mind. If you’re looking to step out of Apple’s ecosystem when streaming music, Spotify is sure to satisfy listeners with its vast collection of music and podcasts, and its powerful music recommendation algorithms. However, while you can access Spotify for free, Premium doesn’t just get rid of the ads. The free version of Spotify doesn’t let you save music locally, which can tax mobile data plans, and also limits how often you can skip songs while using the mobile app (6 an hour). Still, it’s a great option if you want to save money and mainly listen to music on your computer.