What to look for in a gaming headset

Looking for an all-in-one gaming audio solution? Here's what to look out for.

Whether you’re a hardcore PC gamer or a console baby, eventually the people you live with will probably get annoyed at the various bleeps, bloops, and gunshots of your video games. Maybe you’ve already got a great pair of headphones and a webcam with a mic to cover your multiplayer needs, but sometimes it’s nice to have it all in one place. That’s where the gaming headset comes in.

These headsets offer an easy, all-in-one solution to your game audio needs, usually packing in a microphone, decent sound, and lengthy cords to suit just about any gaming setup. As with any kind of tech, there are quite a few gaming headsets on the market, and many aren’t great.

Here’s what you should look for when shopping for a gaming headset.

Editor’s note: This article was updated on July 19, 2021 to clarify the surround sound section according to the state of the gaming industry in 2021.

A comfortable headset is a good headset

The Razer Nari Ultimate gaming headset has a self-adjusting headband that works wonders and doesn’t feel like it’s pinching your head.

How over the ear headphones fit on your head is one of the most important things to consider, especially for gaming headsets. If you’re going to play for long periods of time, a bad fit can be physically painful—meaning you can’t really give all your focus to fragging.

It might seem fine at first, but trapped heat, sweat, and friction can build up over time. After an hour or so, even minor discomfort can feel pretty awful. A little extra weight in the wrong spot can give you neck pains. Slight pressure in the band can turn into sore ears or full-on headaches.

The quality of a headphone’s seal greatly affects the quality of its sound. Poor isolation can really change what you hear, and that’s especially important for headsets and games that use very slight directional audio cues.

The size and material of a headphone pad can have a lot to do with the quality of the seal. If the foam of the headphone pad doesn’t create an effective seal immediately, it may just need time to mold to the shape of your head. If the pad itself isn’t big enough to fit around your ear, you should look at either a bigger pair of headphones or replacement pads with a larger circumference.

If you wear glasses, you should really consider getting velour pads for your headset, or at least gaming headsets with eyewear channels in the ear pads. Without them, you’ll almost certainly miss out on a lot of bass. Just look at this chart comparing frequency response:

They’re exceedingly rare, but some gaming headsets include noise cancelling, which can filter out background noise and make your audio output clearer. Even if you’re playing at home where things are relatively quiet this can help. Traffic out the window, or annoying roommates or family, won’t cause too much interference.

Hearing all those footsteps and distant gunshots from different directions can save your life wandering around Fatal Fields in Fortnite. It’d be a shame to miss any of them.

Most gaming headsets are made of plastic—often cheap plastic. It’s important to find a headset that feels sturdy. If you can find something with a metal or wire frame, that’s ideal. If you’re stuck with plastic, find something with enough range of movement to account for whatever the shape of your head is.

With something made of cheap or flimsy plastic, even a little bit of tension or pressure on the headset can add up. Plastic can creak very loudly when it’s pushed even a little bit. I’ve even had a headset snap in half rather abruptly after a while, and I don’t even have a particularly large head.

Some headsets, like Beyerdynamic’s Custom Game, use an all-metal skeleton, meaning it can take a beating and keep on ticking. Definitely keep this in mind if the headset is going to be used by a… passionate gamer.

The mic of a gaming headset is often overlooked, but it’s important to think about a few things when you’re shopping around.

For starters, don’t get too attached to finding a recording quality gaming headset microphone—they don’t exist. Gaming headset mics often struggle in the bass range of the frequency spectrum, which can make people with especially deep voices sound a little like they’re coming through a tin can. These mics also often don’t get quite enough power through their given connection, whether it’s 3.5mm or USB, which means you might sound a little quiet. If you’re speaking over Discord or a console voice chat, this is pretty easily solved in the settings.

If this is a headset you could see yourself using on the go like a normal pair of headphones, it might worth looking at one with a detachable microphone. If you’re a homebound gamer, that’s less of a consideration, but making sure the microphone is adequately maneuverable is still important—even adjusting things by an inch or two can make a huge difference in call quality.

Not to be confused with 3D sound, surround sound is a relatively common feature in gaming headsets, and depending on the style of game you play, it can be pretty important. Headsets with surround sound offer up to a 360-degree soundscape, with multiple speakers covering each ear. They make it so if something is coming from behind you to the right, you’ll hear it from that direction. In most forms of entertainment, this is a luxury feature. In games, it can provide a real competitive advantage. If you’re one of the millions playing Fortnite, it’s a must.

Surround sound comes in a variety of standards. There’s Dolby Atmos for headphones, DTS:X 2, Windows Sonic, and a variety of others that headphone companies make themselves. These days, pretty much every gaming platform has its own form of spatial audio built in—Windows and Xbox consoles both use Windows Sonic, and PlayStation 5 has its Tempest 3D audio engine. These built-in standards work with any headset, whether it connects over USB or 3.5mm, which means it’s a lot less important for your brand new headset to include its own solution.

Every gaming headset supports stereo sound too, and if you don’t feel compelled to take the step of setting up spatial audio, you’ll probably be fine. Players of MOBA games like League of Legends and DOTA 2, or character action games, or really just about any single player game will have no issue at all with a stereo headset. Just know you’ve got options, even if the headset you buy doesn’t come with DTS or Dolby Atmos support.

How does the gaming headset look 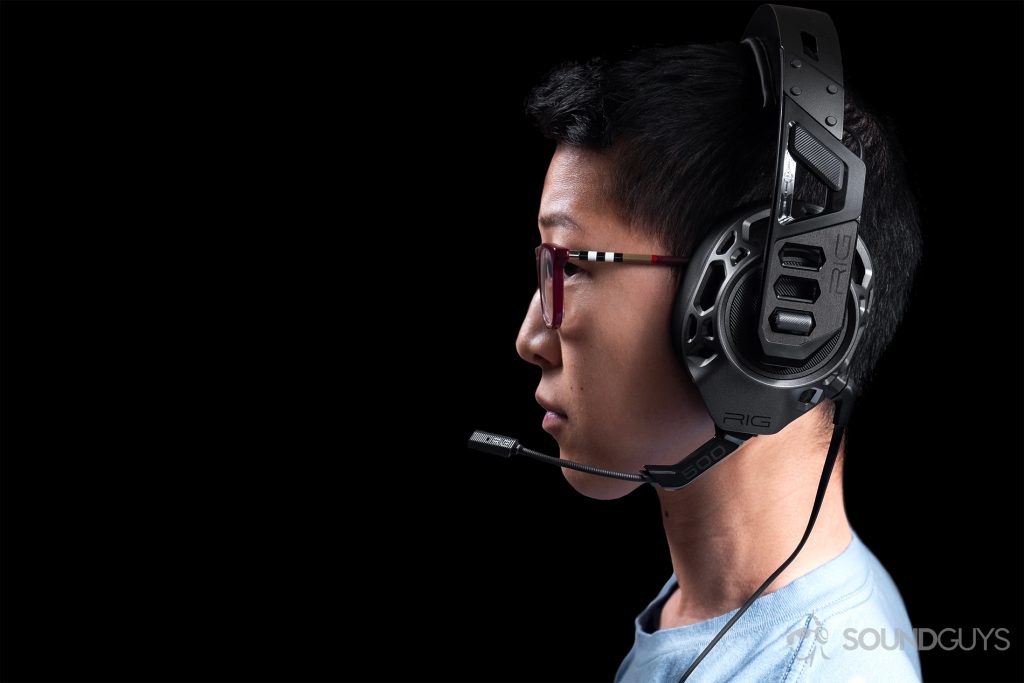 I call this the “will my roommates laugh at me” factor. Many gaming headsets look just like normal headphones with a mic attached. Many others look more like an alien spaceship docked on your head. Some of these things come in wild colors, with strange angular designs, colored LEDS, and names seemingly more likely to belong to something that fires lasers than covers ears.

This is especially important if you’re planning to wear your headset in public. Having a detachable mic won’t help if it looks like you’re wearing a little Tron lightcycle on your head.

It’s not hard to find a decent gaming headset for a decent price. They start getting pretty good from around $60 up, so you don’t have to break the bank to find the right one. Headsets like the Razer Kraken X and the Fnatic React headset both offer solid, no-frills experiences on the cheap. And even once you start getting closer to $100, options like the HyperX Cloud Alpha and SteelSeries Arctis 1 Wireless offer excellent experiences. Regardless of whether you get one of these, as long as you keep what I mentioned in this post in mind, you should end up with something that suits you just fine.

We’ve also got a bunch of lists and headset reviews, whether you want something cheap or extremely expensive.