An interactive gaming headset with booming bass and a boom mic

If you can afford to invest in a long-lasting set of gaming headphones, the Beyerdynamic CUSTOM Game are well worth it. Not only do they sound good for gaming, but they can easily be used as a daily desktop headset, affording you two products for one. 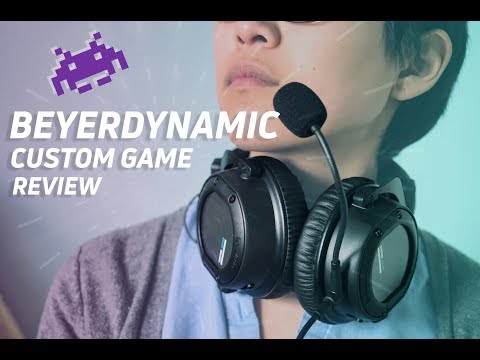 Sweaty hands death-grip your PS4 controller while you stare intently at the screen. Your left thumb, nearly slides off the joystick as your character sprints ahead, mere feet from your team’s base.

“Turn ar… d!” Your teammate exclaims, his voice muffled as his roommates make a ruckus in the background.

Your character drops to the ground. As the view shifts from first-person to third-person spectator, the game stats appear. You lose, 49 – 50.

Beyerdynamic knows how frustrating miscommunication is and recently plunged into the gaming sphere with the Custom Game headset. The cardioid, boom microphone effectively filters out ambient noise, allowing the speaker to take center stage. Though, with pre-established brands like Turtle Beach and Astro, is there room for a hi-fi audio company to join the world of gamers?

Editor’s note: this review was updated on April 6, 2021 to include a table of contents.

Who is the Beyerdynamic Custom Game for?

What’s it like to use the Beyerdynamic Custom Game? Swapping between the six cardboard plate covers of the Beyerdynamic Custom Game just takes an Allen wrench and a couple of minutes.

Nearly every piece of the Beyerdynamic Custom Game headset is user-replaceable.

Beyerdynamic’s ubiquitous design translates well into gaming headsets, as the massive ear cups and metal construction offer durability and weight distribution not seen on many other cans. Contrary to their size and weight, these are supremely comfortable. Even with glasses, I was able to wear the Beyerdynamic Custom Game headset for two and a half hours before flirting with fatigue. Speaking of which, all the plush padding is removable and, thus, replaceable. The ear cup plates are also user-replaceable, allowing individuals to style their headset to their liking. Minimal maintenance is required, but every now and again, users should gently clean the ear pads with a damp cloth. Beyerdynamic makes the headband a breeze to replace. Users simply have to un-velcro it from the metal reinforcement. The in-line remote has an easy-access mute switch, along with a volume dial and multi-function button.

The 3.5mm headphone jack makes the Beyerdynamic Custom Game compatible with just about any device. Plus, there’s a mute switch, and on the right, is a multi-function button, which calls upon virtual assistants. The other side houses a volume dial. Initially, it looks easy to accidentally adjust, but usage has proved otherwise. As we cover in the following section, yes, users can plug directly into their controller, if it allows for it.

How to adjust the sliders

Just like the Custom One Pro, the Beyerdynamic Custom Game integrates adjustable sound sliders, which reveal or conceal a series of three bass reflex vents; like a physical EQ-ing mechanism. As the position numbers ascend, so too does the bass emphasis. Switching directly from the first position to the fourth creates a distinct contrast, but gradual transitions are harder to differentiate. The left ear cup is set to pos. 4, which allows for maximum bass emphasis, while the right ear cup is set at position one, the weakest bass setting with the most ambient noise-attenuation.

To translate the parseltongue of specs, the around-ear headphones are closed-back, designed to improve isolation; its frequency response ranges from 5 – 35,000Hz, 15,000Hz more than the average human ear can perceive; and are a low-impedance, 16-ohm system, which means that they can be used with a phone without draining its battery.

The Beyerdynamic Custom Game cable terminates in a standard 3.5mm plug, which can be connected to any compatible device. And, yes, that means that you can plug directly into your Sony Dualshock 4 controller, gaming desktop, or anything else with a 3.5mm input and play away. The Beyerdynamic Custom Game headset retails for $199 and functions both as a gaming headset and for daily use.

All headphones need a mic this good

Atop the cable is a flexible cardioid microphone, undoubtedly one of the best microphones that I’ve used on a headset. The cardioid pattern allows for placement flexibility and is generally forgiving. These mechanics­—in conjunction with the pop shield—do a decent job filtering out ambient noise, exactly what you want when communication is paramount. For optimal voice quality, place the mic two or three inches away from the mouth.

The Beyerdynamic Custom Game is more than just an interactive gaming headset; they’re an all-’round great set of cans. Though much attention is paid to the low-end reproduction, the midrange and treble are nothing to downplay either.

Casey Abrams’ Robot Lovers, takes full advantage of recording across the x, y, and z axes, and the headphones’ exploit this mastering to the fullest. The Custom Game provides a great sense of spatial awareness; it sounds like the incoming cowbell is placed precisely halfway between the drums and my ear and is isolated to the right channel. This specificity wasn’t recreated by other headphones like the Monoprice 8323. The cardioid microphone is not detachable from the cable.

On a related note, any gamer who plays first-person shooters knows that spatial awareness is key for a successful kill/death ratio. It’s imperative for users to hear and identify where an enemy is approaching from, in order to diffuse an impending attack. If ambient noise is impeding in-game audio, simply adjust the sliders to position 1, which simultaneously reduces ambient noise and prevents the low-end from masking midrange frequencies.

For readers dubious of the variable bass reflex system, doubt no more. It’s quite effective and simple to operate. Listeners who have variable hearing abilities in each ear are accommodated by the Beyerdynamic Custom Game, which allows for different position settings on each ear cup. Though there are certainly more economical gaming headsets available, the Custom Game offers the ability for users to replace a variety of parts, increasing the unit’s longevity.

If your mindset aligns with mine, $149 is steep for a gaming accessory; however, Beyerdynamic makes sure your purchase is a long-term investment with the ability to easily wash and replace parts. In theory, you could have the Custom Game for years on end, only having to seldom replace parts. Plus, the cardioid microphone does a fantastic job transmitting the speaker’s voice, while simultaneously rejecting background noise.

If you're looking to invest in a long-lasting headset, the Custom game are a top contender.

It may seem odd that a hi-fi audio company is entering the gaming sphere, but the variable bass reflex system is novel and effective. Not only that but regarding sound quality, Beyerdynamic is deserving of its repute. It’s refreshing to see a world-class company push its limits while bringing something new to the table.

If you want even better mic quality, go with the standalone Beyerdynamic Fox USB Microphone The knobs are easy to adjust and feel sturdy. It’s unlikely that they’ll fall off anytime soon.

The Beyerdynamic Fox USB Microphone is great for gamers, whether you just want to sound better for your teammates or if you’re a Twitch streamer. The mic houses onboard gain and mix adjuster knobs as well as a mute button. Its cardioid polar pattern is forgiving when it comes to placement, so you don’t need to worry about your voice not being picked up if you’re not directly facing the mic, and the mic records 24bit/96kHz audio.

Does this gaming headset have surround sound?

No. The Beyerdynamic Custom Game is a 3.5mm gaming headset, and as such doesn't support virtual surround sound. However, lacking surround sound shouldn't be a deal breaker—it's just not that important most of the time.

Beyerdynamic Custom Game Interactive Gaming Headset
9
The custom game is the ideal headset for all gaming and multi- media applications as well as voice over IP applications. The detachable gooseneck microphone can be ideally positioned and provides maximum intelligibility of speech when playing and phoning. With the “custom sound slider” bass reflex vents at the Housing shells the sound can be selected in four stages from an analytical sound to a rich, full bass. The remote control integrated in the cable with Features such as microphone mute, volume control as well as temporary mute button is always within reach. No matter whether PC or console, the supplied extension cable ensures the freedom of choice to connect a device.