If you don't need a mic, you still have to buy one to get these.
No extra features.

The Beyerdynamic Tygr 300 R are a great pair of stereo headphones that forgo the typical features of a gaming headset, for better or worse. If you need a great headset and microphone for gaming, streaming, or podcasting—and you don't have either already— this is worth considering.

Traditional gaming headsets have a lot going for them. They offer compact, simplified solutions to the audio needs a wide range of gamers—from the aspiring Fortnite professional to the hobbyist looking for the most cinematic and immersive audio experience. However, for all their features, bells, and whistles, gaming headsets often don’t quite nail the basics. Mic quality is often pretty average, and the audio usually over emphasizes bass to obnoxious degrees. That’s where Beyerdynamic TYGR 300 R comes in.

The Tygr 300 R, part of the company’s Team Tygr bundle, is a gaming headset aimed at nailing the basics, but does it stick the landing?

Who are the Beyerdynamic TYGR 300 R for?

The Team Tygr Bundle is aimed squarely at gamers, streamers, and podcasters—really anybody who just wants great sound from a headset and a microphone. The headphones are meant for use in the home, with open-back earphones so you won’t miss a doorbell or phone ringing in the background. This is a pretty simple package—just the headphones and an adapter.

The headphones come with a 1/4 inch adapter in the box, and that’s it. There isn’t even an instruction booklet—not that you’d need one. Of course, they also come bundled with Beyerdynamic’s Fox USB studio microphone, but that’s in another box. When the light catches it just right, you can see the orange inside the earphone grille.

The Tygr 300 R is a sturdily made headset, with a metal frame and solid-feeling ear cups. The band is flexible metal, wrapped in a leatherette cushion held in place by velcro. The cushion also keeps the wire connecting the two phones out of the way. The headphones sport comfortable circular velour pads, so they’re great for bespectacled gamers.

These are some of the less conspicuously gamer-looking gaming headphones around. There are no colored LEDs, or edgy designs. This is the kind of headset you can wear without worrying if it looks like a UFO has docked on your head. The Tygr 300 R are almost all black, with orange visible through the open back grille on each earphone. They’re about as inconspicuous as it gets when it comes to over-ear headphones. The Tygr 300 R comes with comfortable and spacious velour pads.

The headphones comfortably fit on my head with minimal adjustment, and even after hours on end of use, I was more than happy to keep wearing them.

There aren’t any in-line or in-ear controls with these headphones. As gaming headsets go, there’s less to using this one than most. There’s no need to worry about extra settings; multiple knobs, dials, or switches; or clunky software. The Tygr 300 R is extremely simple—just plug it in and play.

These wired headphones use a 3.5mm plug to connect to your device. They also come with a 1/4-inch adapter, if you’ve got something that uses it. 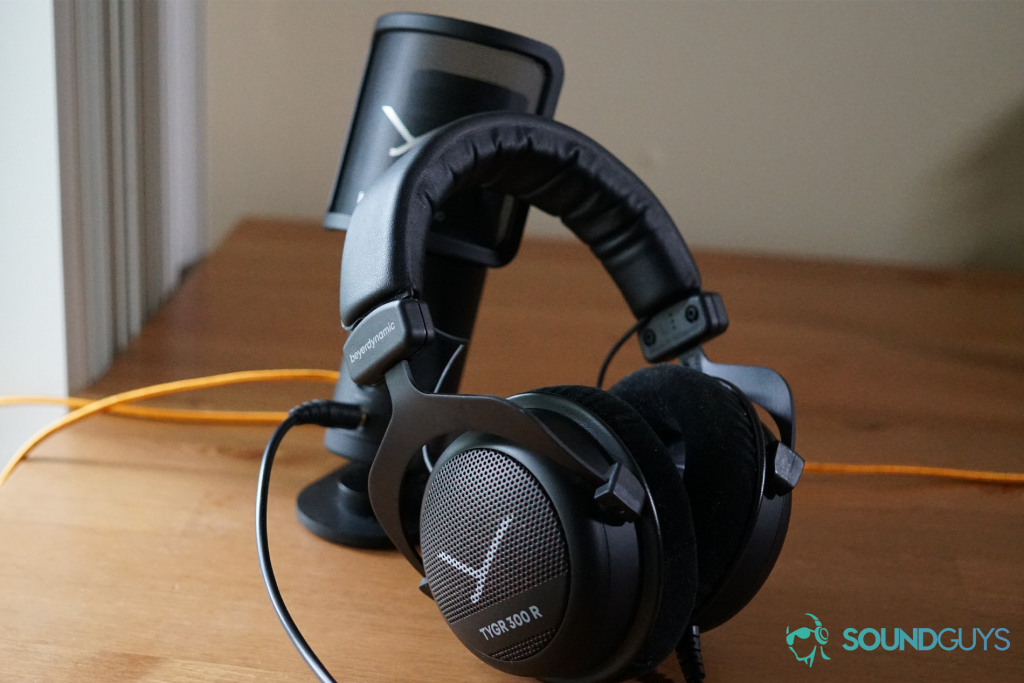 There’s no microphone built into this headset, which is pretty uncommon for something focused at gamers. However, the Tygr 300 R is only available bundled with the Beyerdynamic Fox USB studio microphone, and it’s clear the headset was meant to be used with it. The Fox covers for the lack of in-line or on-ear controls, sporting a 3.5mm jack in the front and knobs for controlling mic and game mix, and overall output volume.

We’ve got a full review of the mic from when it came out in May of 2018, but suffice it to say here: it’s very easy to use and offers good sound, albeit with pretty limited options.

Gaming with the Beyerdynamic TYGR 300 R The Beyerdynamic TYGR 300 R doesn’t offer the typical gaming audio you’d expect from something of this price. There are no surround sound features of any kind. However, sometimes the best gaming headset you can get is just the best headset you can get. A lot of the most common bells and whistles just don’t add all that much to the experience.

While a realistic soundscape and surround sound simulation can be useful in games like Fortnite, Overwatch, or the myriad other competitive shooters, stereo sound still gets the job done pretty well. In Overwatch‘s case, you can turn surround sound on in the menus even with stereo headsets. However, ultimately the difference just isn’t that big, and it matters even less in single player games or multiplayer games with different perspectives like League of Legends or Hearthstone.

I never had any complaints gaming using the Beyerdynamic TYGR 300 R. The headphones sounded great and they never missed a beat.

How do the Beyerdynamic TYGR 300 R sound? As the chart shows, the Beyerdynamic TYGR 300 R offers accurate sound across the sound spectrum. It slightly boosts bass, but not nearly as much as what feels like the vast majority of gaming headsets. In game, this means sounds of all varieties come across loud and clear. You don’t risk losing the sound of footsteps or characters speaking in the booming bass of explosions and gunfire, which can be a real boon in multiplayer environments.

When listening to music, it means you shouldn’t have too much trouble picking out the sounds of strings and lighter instruments from songs with more prominent bass lines.

In Telepathic by Rose Hill Drive, the Tygr 300 R had no trouble picking out the maracas in the background early in the song, despite heavy guitar and bass sounds. In the chorus, the rather strange whispered background vocals came through with similar clarity. These kinds of details often get lost in gaming headsets that over-emphasize bass. The Beyerdynamic TYGR 300 R won’t isolate you from much, but they’re open-back headphones. What’d you expect.

The Beyerdynamic TYGR 300 R don’t offer the greatest isolation in the world, but they’re not really designed for that. They’re open-backed headphones, so they won’t isolate you from the annoying noises of the home, like loud room mates or family, or TV in the other room, or traffic out the window. However, that also means you’ll have a harder time missing things like a ringing phone or doorbell.

These headphones aren’t just aimed at gamers, though. With the studio mic bundle, podcasters are also a potential audience. These headphones make it easy to hear yourself talking, which can be nice when recording—it’s always a little disorienting when your own voice is muted by more intense headphone seals. 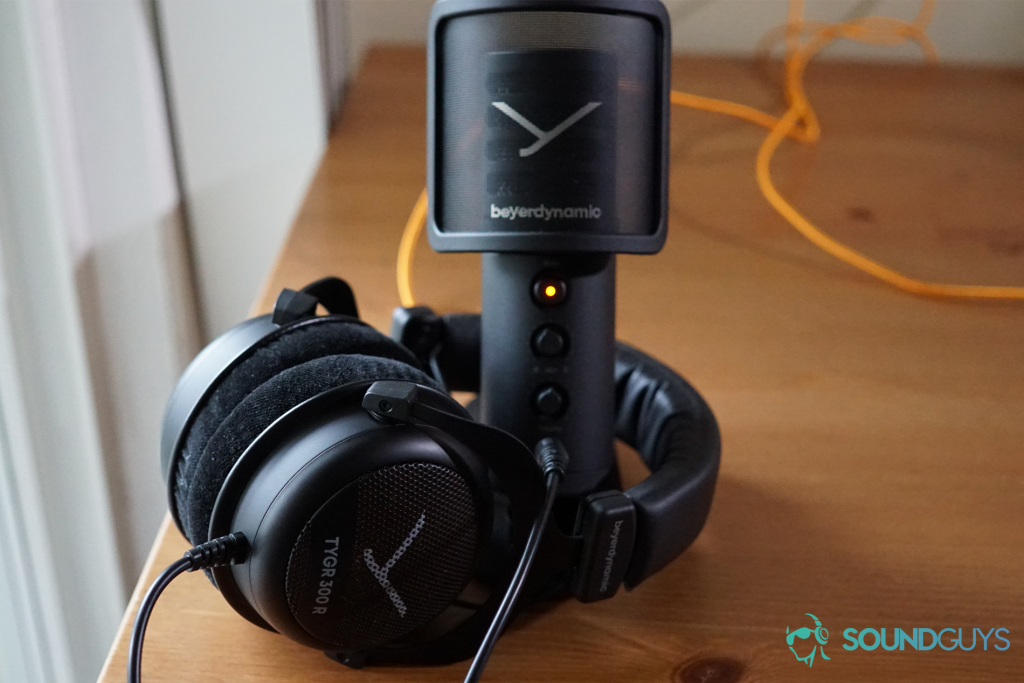 The Tygr 300 R, and its bundle, is a great option for very specific needs.

The Beyerdynamic Tygr 300 R are a great pair of gaming headphones. They offer clear and accurate sound and I never ran into anything that negatively impacted my gaming experience. On top of that, they’re just as good for music.

The lack of an integrated mic was a little inconvenient at times, though. I had to spend a little more time getting my desk organized to fit a stationary mic in a convenient way, when all I really wanted to was plug in and start playing. On top of that, you can only currently get the headphones bundled with the Fox microphone, which makes this a pretty expensive headset.

That’s not necessarily a bad thing, but if you’re looking to drop $400 on a gaming headset that sounds great and has an integrated mic with decent sound, something like the Audeze Mobius might be a better fit. If you’ve already got a separate mic you like, the HyperX Cloud Alpha offers similarly great audio quality and it’s only $100.

This not to say you shouldn’t get the Tygr 300 R, and its bundle—it’s just that this is a product with a pretty specific ideal audience. If you’re a gamer, a twitch streamer, or a podcaster, and you need a great headset and microphone—and you don’t have either yet— this is definitely worth checking out. Just make sure it’s exactly what you’re looking for.