These noise cancelling earphones are an awesome value, if you can find them in stock.

1More is known for quality products at an accessible price point and it holds fast to that philosophy with the 1More True Wireless ANC. These dual-driver earphones successfully unite style and performance, thanks to the fine noise cancellation and understated design. 1More is one of few companies to partner with Qualcomm for True Wireless Stereo Plus connectivity, ensuring a stable connection no matter the environment. It’s not the best ANC on the market, but these earbuds are great all-around performers for any listener.

Stylish, functional noise cancelling earbuds don’t come cheap… typically, but the 1More True Wireless ANC is an exception. It includes a wireless charging case and earbuds outfitted with comfortable oval ear tips. These earphones are in high demand, let’s see if 1More’s earphones are too good to be true or just right.

Editor’s note: this review was updated on April 21, 2020, to address the earphones’ limited availability.

Who should get the 1More True Wireless ANC? The earphones fit comfortably and don’t place undue pressure on the outer ear. 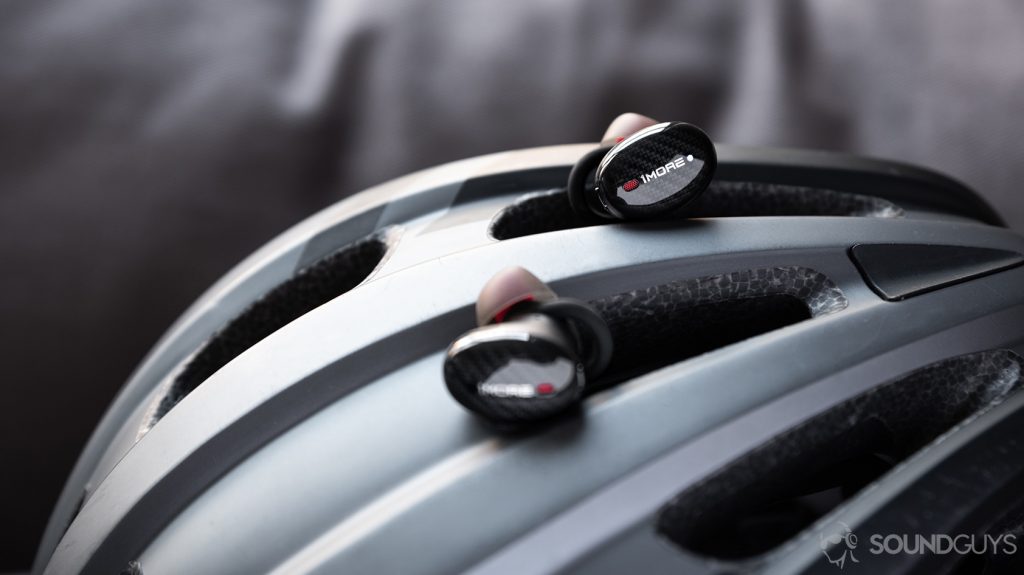 The O-hooks blend well with the earbud design and help keep them stable when moving around.

1More’s first noise cancelling true wireless earbuds resemble the 2019 1More True Wireless Stylish. This year’s headset retains the same O-hook mechanism and angled nozzles for securing a proper fit in the ear while introducing advanced features. The metal charging case can be topped up with the included USB-C cable or via a wireless charger.

What’s more, the earbuds now feature a dust-proof stainless steel mesh sandwiched between the housing’s internals and plastic outer shell. Build quality is markedly improved over the economical True Wireless Stylish, but water-resistance still isn’t featured with these earbuds. If you plan to exercise in them, do so with caution.

1More You can control nearly everything directly from the earbuds.

An infrared sensor housed in each earbud allows for automatic media pause upon removal. Unlike other true wireless earphones, playback doesn’t automatically resume when re-inserted. For that, you have to rely on the on-board controls and double-tap either tactile button. Speaking of, controls are generally sound, except that I frequently and inadvertently toggled listening modes when trying to readjust the earbuds.

A three-pair mix of ear and wing tips are provided by 1More, allowing you to assemble a custom fit. The oblong silicone sleeve fits with, rather than against, the natural shape of one’s ear canal. Unfortunately, the left default sleeve tore at the seam, so be careful when you’re switching things out as the material isn’t very durable: the base portion of an O-hook also ripped upon removal.

Is the 1More Music app useful?

Unlike competitors, 1More doesn’t push its free app onto listeners by brandishing the box with Google Play and App Store logos. This is for good reason: the app doesn’t do much of anything. Its greatest value lies in the firmware update access; otherwise, it offers no benefit beyond what listeners can control directly from the earbuds (e.g. ANC intensity selection). I do appreciate how 1More releases updates when necessary, something we’ve seen with the 1More Stylish. During testing, our review unit operated on firmware v0.3.23.

On March 24, 2020, 1More released a firmware update to improve audio quality according to the varying intensities of ANC. In order to access this update: 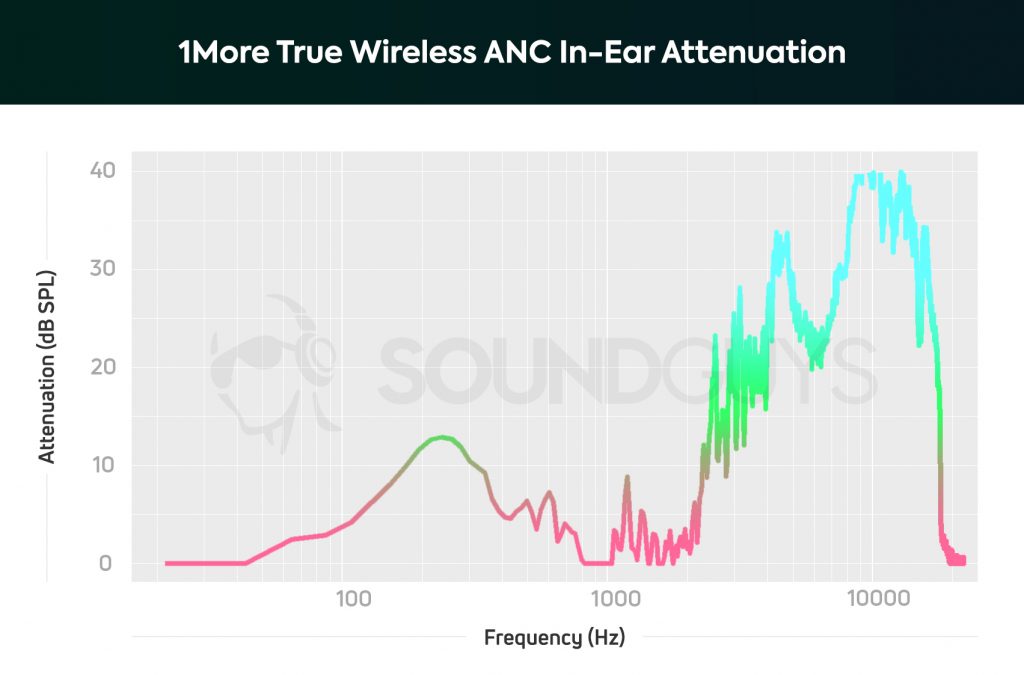 Noise cancelling performance is middle-of-the-road compared to premium alternatives like the Sony WF-1000XM3 and Apple AirPods Pro. Low-frequency attenuation is minimal, and only reduces loudness by ⅛ to ¼. Upper bass sounds are ½ as loud as they sound without ANC, which is enough to take the edge off of distant traffic. High-frequency noise is effectively blocked out, despite the dip in attenuation from 800Hz-2kHz. This range is difficult for a lot of true wireless earphones to combat and means most nearby chatter will make its way to your eardrums. 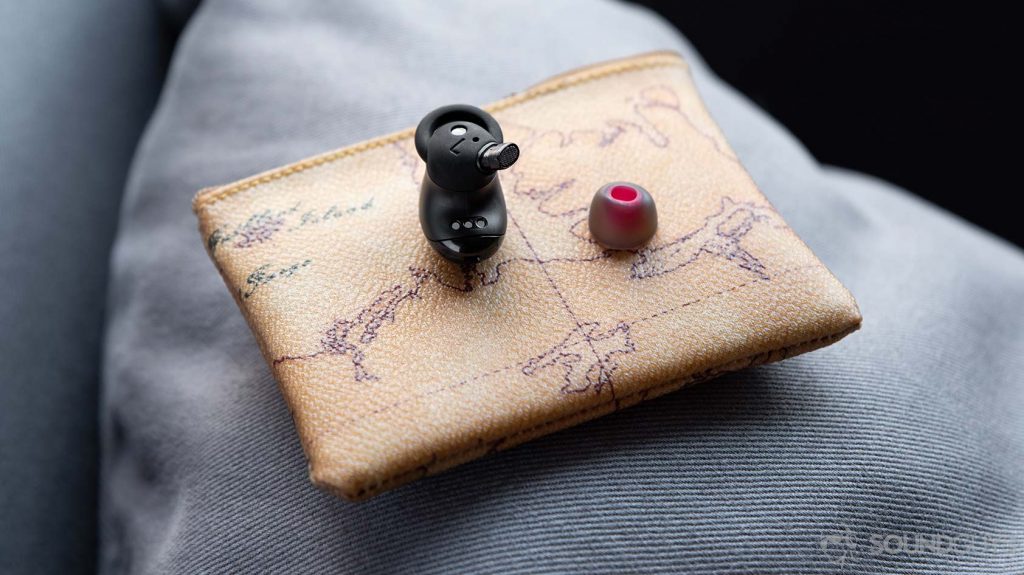 Oval nozzles fit more naturally with the shape of the ear canal.

Similar to the Apple AirPods Pro, the 1More True Wireless ANC uses a feedback and feedforward microphone system to mitigate both outside noise and in-ear noises (e.g. resonances that occur up and down our ear canals). These microphones then send the information to an integrated digital signal processor (DSP) to produce a natural quieting of ambient noise.

ANC effectiveness aside, I wish the pre-recorded voice used to notify you of which listening mode you enter was louder. This isn’t a huge problem when switching between passthrough and ANC off, but it’s difficult to discern noise cancelling level 1 and level 2 by ear alone. The USB-C/wireless charging case fits easily into a pants pocket.

1More shelled out for Qualcomm True Wireless Stereo Plus, which operates differently from standard true wireless connections. Rather than designating one earbud as the primary receiver and the other as the secondary, True Wireless Stereo Plus separately and simultaneously connects to both earbuds. Doing so reduces latency while improving connection strength and stability. The only caveat is you need to remain within the standard 10-meter wireless range.

The earbuds support both aptX and AAC high-quality Bluetooth codecs, meaning iOS and Android users alike benefit from CD-like quality audio. To fully benefit from the codec support, make sure the earbuds create a cogent seal as external noise can mask the sound of your music. The other benefit of aptX and AAC support is latency reduction, which is great news for mobile Netflix viewers and such.

We recorded 3 hours, 31 minutes of listening with noise cancelling on high before the batteries were depleted. This isn’t great but is unsurprising given all the technology drawing power from these minute ‘buds. While it does fall short of 1More’s listed five-hour battery life (ANC on), the fact that we throw earbuds back into the charging cases when inactive means battery life should rarely be an issue, save for cross-country flights. Even so, the earphones support fast charging: 15 minutes in the case provides two hours of listening, and said case supplies an extra 2.6 charges before requiring two hours to top back up again.

How do the 1More True Wireless ANC sound? 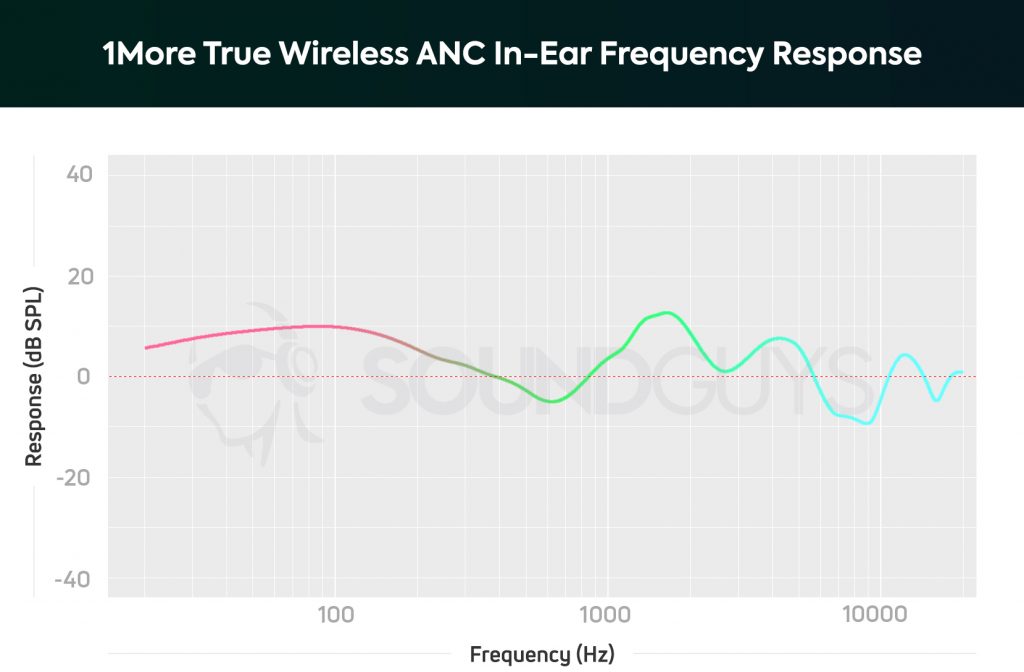 The 1More True Wireless ANC rely on a dynamic driver paired with a balanced armature driver in each earbud. This division of labor results in less harmonic distortion compared to similarly priced single-driver counterparts. As depicted by the frequency response chart above, low notes are boosted, but it isn’t as emphatic as the 1More Stylish.

If your music library is comprised of female vocalists and acoustic tunes, you may not appreciate how the sound signature makes bass notes sound twice as loud as the aforementioned sounds. 1More follows a formulaic approach to sound quality with these earphones: amplify the lows and highs. This gives more oomph to music while maintaining a false sense of clarity by way of treble emphasis.

Remember Sports’ song Up from Below, is a great example of the 1More True Wireless ANC In-Ear’s strengths and weaknesses. The song opens with a quick electric guitar riff before exploding into instrumental din backing Carmen Perry’s bare vocals. Auditory masking is immediately apparent when listening to Up from Below as the first line of the song, “I found your sign in the sky last night…,” is hard to discern over the right-channel guitar power chords and left-channel drum hits. The cymbal crashes are reproduced so that they’re more audible than they should be, a consequence of the 1.5-5kHz amplification.

While audio purists find this kind of sound signature unappealing, the fact remains that it’s popular among general consumers: we as a collective always want more bass, and the emphasized high notes do a good job at tricking our brain into thinking we’re perceiving all instrumental detail when in actuality it’s just that a certain range that’s typically hard to hear is louder. Although the bass is overkill for my taste, many listeners will enjoy it and how it pumps up the sound of their music. 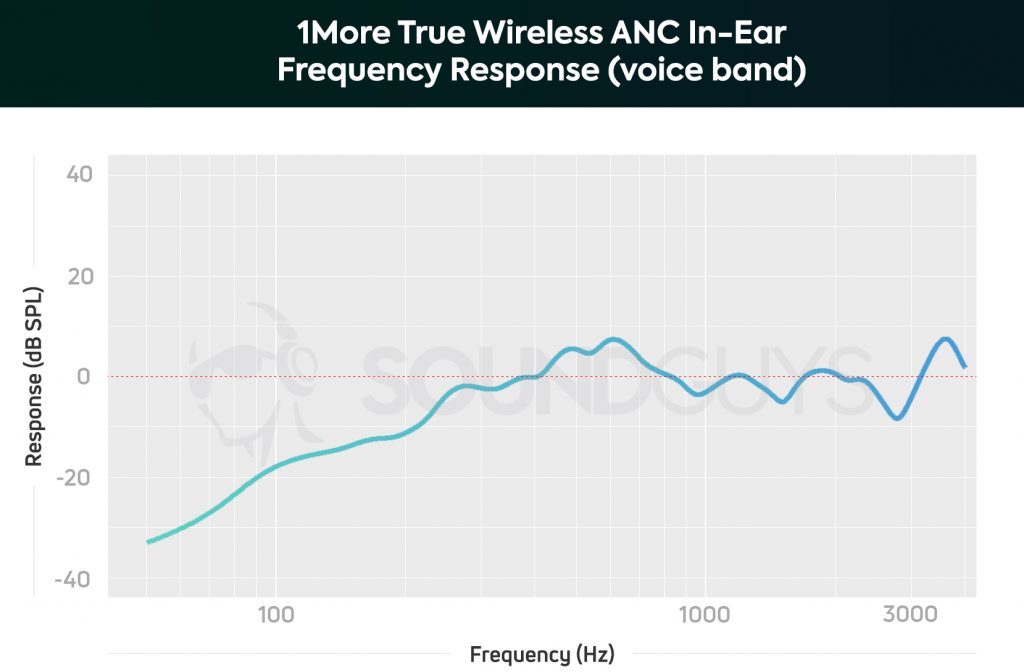 Low voices sound distant as a result of low-end attenuation.

The microphone array renders low fundamental frequencies two to four times quieter than their midrange counterparts. This can make baritone voices sound “off” to the person on the other line, but most people, women in particular, should sound relatively true to form. Of course, we spend all day discussing performance, or you can listen to the voice sample below.

How do the 1More True Wireless ANC compare to other noise cancelling true wireless earbuds? 1More’s ANC earbuds are $100 cheaper than the Master & Dynamic MW07 Plus and offer a more comprehensive set of features.

The most appealing thing about 1More’s noise cancelling earphones is the $199 price to boot. This is significantly cheaper than its competitors, and while performance can be improved, you get a lot of bang-for-your-buck with these earbuds.

Apple’s AirPods Pro are the talk of the town when it comes to this class of earbud, and for good reason: the company paved the way for true wireless popularity with the original AirPods. Seeing how the AirPods Pro cost $50 more than 1More’s unit, it makes sense that noise cancelling is more effective. 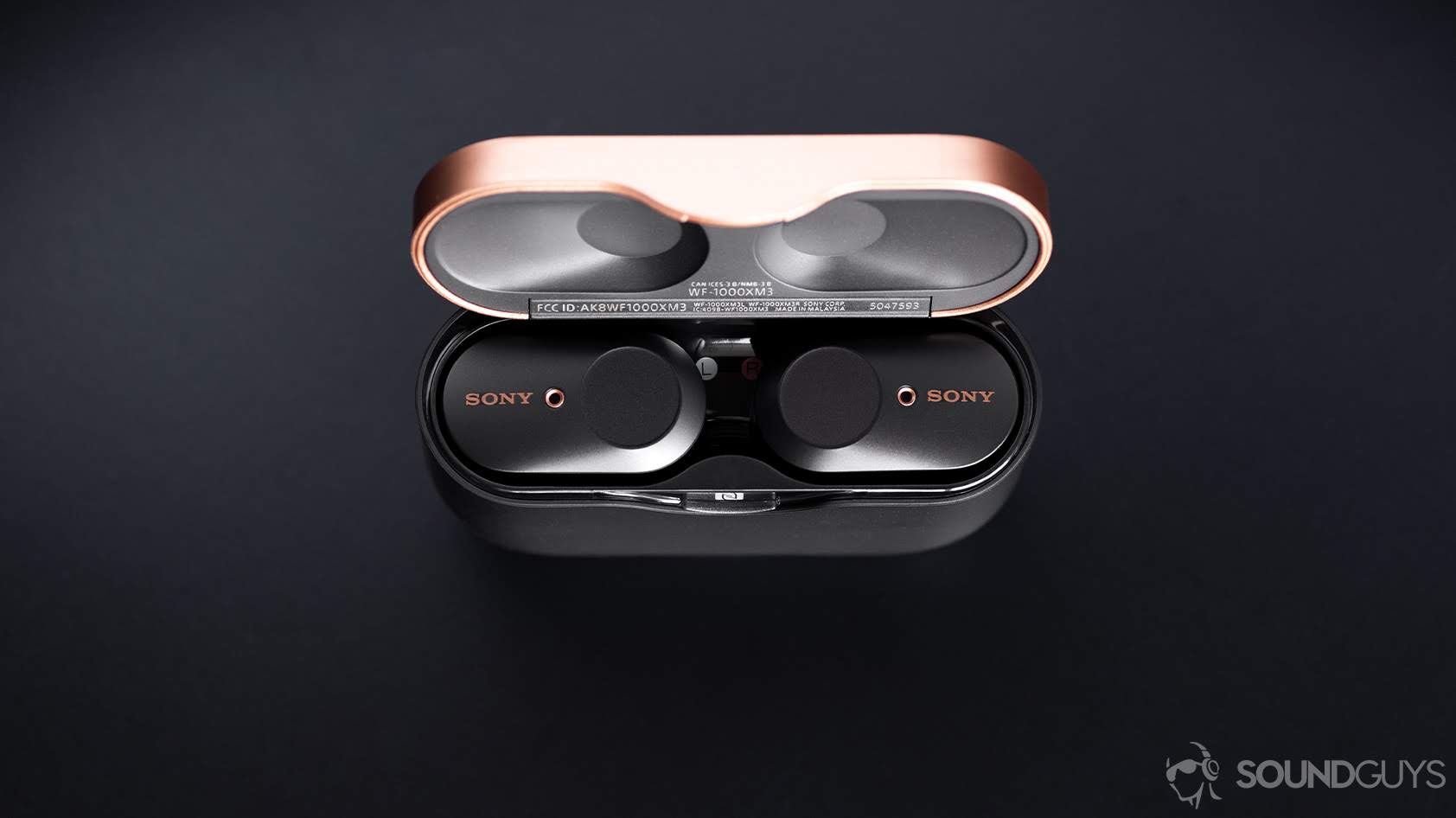 However, other features like connectivity and comfort are similar. The latter is highly subjective after certain base requirements are met, and the former is taken care of by Apple’s H1 chip or Qualcomm True Wireless Stereo Plus. Connection stability is remarkable with either pair of earbuds; however, iPhone users will benefit more from the proprietary hardware as device switching is made simple and hands-free Siri access is made available.

While both units have a built-in DSP, Apple’s does a bit more by adjusting audio reproduction when an improper seal forms and allowing for a basic earbud fit test. That said, it’s neat that 1More includes a DSP at all, and makes me excited to see how much further the future of sub-$200 totally wireless earbuds has to offer. 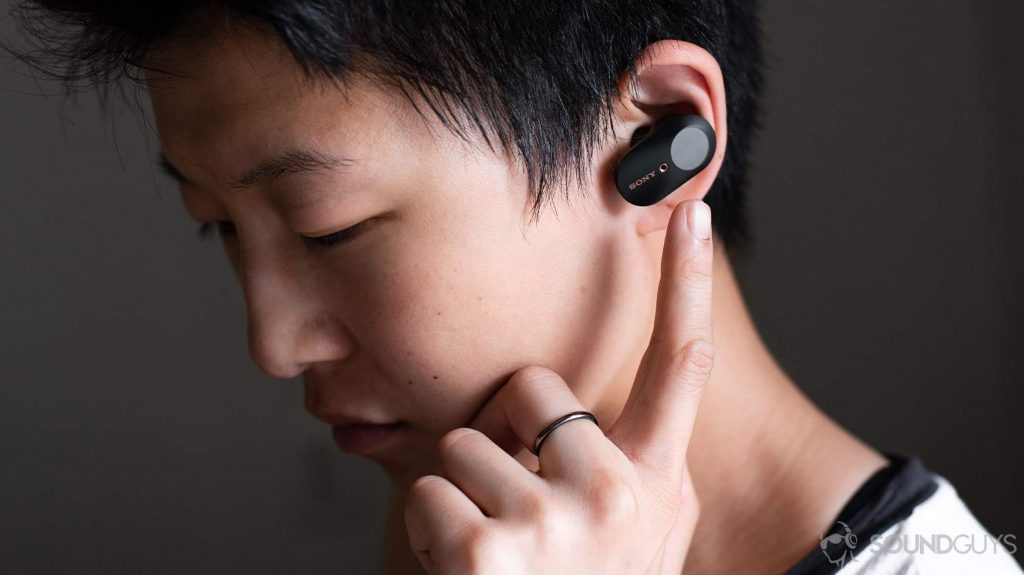 Sony is king of the castle when it comes to noise cancelling consumer audio products, and the Sony WF-1000XM3 is a hard product to beat. While the 1More True Wireless ANC can’t outperform the Sony earbuds on ANC alone, there are some advantages. For one, the dust-proof design is something that may seem frivolous without sweat-resistance but is something I seek in workout earphones as I often listen to music when rock climbing. Knowing something can withstand my chalky hands is a must-have when browsing around.

Ultimately both are great quality products, and while I prefer the Sony WF-1000XM3 over the 1More True Wireless ANC, there are plenty of reasons to champion 1More instead.

Should you buy the 1More True Wireless ANC?

Yes, you should absolutely get the 1More True Wireless In-Ear if you can find them. As of April 21, 2020, the earphones are out of stock on Amazon and on the official 1More website, further reinforcing that these ‘buds are among the best noise cancelling true wireless earbuds you can get with a starting price of $199. Their bang-for-your-buck value will only increase as the price inevitably drops with the changing market. You should click out of this review knowing that 1More’s earbuds don’t have the best ANC; instead, what they offer is a comprehensive feature set and attractive design at a reasonable price.

1More Triple-Driver review: What makes them worth it?