1More covers the basics with these slim earbuds.

The 1More Stylish epitomizes consumer friendly audio: the bass-heavy sound signature appeals to a wide swath of listeners, while the sleek design is attractive without being gaudy. If you're looking for true wireless earbuds with good battery life and style, these are it.

One way to stand out from the crowd of true wireless earbuds is to be the prettiest of them all. The 1More Stylish true wireless earbuds hold true to their name with an understated yet fashionable design. That said, there are a few drawbacks to the earbuds. For some, though, it may be worth it for the solid battery life and excellent fit.

Who is the 1More Stylish True Wireless for?

The clamshell securely holds the earbuds and charges via microUSB.

Anyone who enjoys a bass-heavy sound and prioritizes comfort and battery life before audio quality. That’s not to say the 1More Stylish earbuds don’t sound good; however, audio reproduction isn’t as clear as the Creative Outlier Gold—another set of sub-$100 totally wireless earbuds. Although 1More’s earbuds didn’t receive an official IP rating, they’re sweat-resistant and should withstand most workouts. 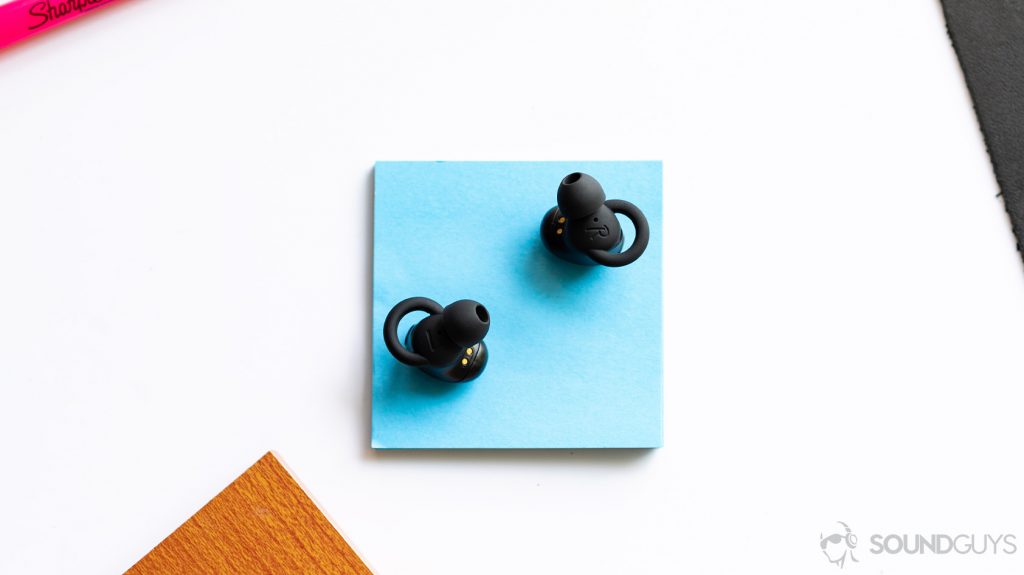 The O-hooks help to hold the earbuds since the plastic housings are rather slippery.

The pebble-shaped earbuds are as slippery as they are sleek. After a few fumbles, I took to holding them by the silicone O-hooks. On the rear end of each earbud rests a button for music and call control.  You can also access virtual assistant control by clicking either multifunction button three times, but in order for it to work, all media playback apps must be closed. As of November 6, 2019, listeners may make volume adjustments from the earbuds via the multifunction button on either ‘bud. In order to do this, download the 1More app and update the firmware. After the update is complete, clicking the left earbud’s button decreases the volume while doing the same to the right side increases it. 1More advises against updating the firmware if your phone uses a Snapdragon processor earlier than the 855 version.

An LDS antenna rests laterally within each housing which serves to improve connection stability by mitigating signal interference; however, use resulted in frequent connectivity skips and stutters well within the 10-meter connectivity range. Oftentimes, when I was listening with my Samsung Galaxy S10e less than a meter from the earbuds, hiccups were as frequent as a few times per song.

Connectivity stutters frequently occurred even with my phone just a meter away from the earbuds.

While wireless stability is a bummer, the 7mm titanium composite dynamic drivers reproduce a powerful bass response, sure to satisfy any rap, EDM, or hip-hop fan. Another positive of the earbuds is that they’re sweat-resistant, which pairs nicely with the bass-heavy sound. The O-hooks kept the earbuds in place while I was running and rock climbing with only a few instances when I felt the need to adjust them.

The 410mAh charging case takes just over an hour to complete a full charge cycle, which is coincidentally the same amount of time to fully charge the 55mAh earbud batteries. Unfortunately, 1More installed a microUSB, rather than USB-C, input on the charging case. While this is a bummer, it contributes to the sub-$100 price, an omission that may very well be worth it to many.

How do you connect the 1More Stylish earbuds to your phone? Despite the LDS antenna in each earbud, connectivity stutters are a frequent occurrence.

The 1More Stylish earbuds connect via standard Bluetooth procedures. You can either connect both earbuds to your smartphone or opt for the right one only. This is useful if you need to hear your surroundings. The earbuds operate via Bluetooth 5.0 and support both AAC and aptX high-quality Bluetooth codecs. If you experience latency, it’s most likely due to your phone or the app you’re using.

Both AAC and aptX high-quality codecs are supported for lag-free playback.

In theory, the earbuds maintain a 10-meter Bluetooth range, but in practice, I found that connectivity consistently falters once I walk seven or eight meters from my phone, and this is without any walls in the way. Things get even less reliable outside: my phone was in my pocket and audio playback stuttered so frequently that there were a handful of times I completely unpaired and re-paired the 1More Stylish earbuds from my phone. Bass notes are four times as loud as notes around the 2kHz mark, meaning your music will have a tough time with cymbals. 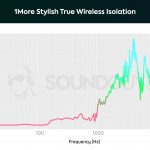 It sounds noticeably bass-oriented. The frequency response chart depicts bass frequencies (pink) emphasized 10dB louder than high midrange frequencies (green); this means that the former sounds four times as loud as the ladder. Although it’s not an accurate frequency response, some may enjoy the boosted low-end. Be aware, though, it does result in auditory masking, meaning lower notes will make higher ones more difficult to hear, reducing overall clarity in the process.

Isolation is solid. Granted, this is highly dependent on your use of properly fitting ear tips. Once you find the right fit, you’ll notice how well the 1More Stylish insulates you from the environment. Not only does this allow for an optimal low-end response, but it also means you’re less likely to increase the volume to dubious levels.

Dane Caston’s song Do It, perfectly portrays how exaggerated bass frequencies are and how this emphasis, while fun, reduces clarity. The song opens with an already emphasized bass track reminiscent of subwoofers that the cast of MTV’s show Pimp My Ride would install in patrons’ cars. Skip ahead to 0:22; Caston begins rapping but anything other than the fundamental frequency of his voice is difficult to hear. Vocal detail and resonances are lost to the already emphasized bass which is further exaggerated by the 1More Stylish sound signature.

Again, this isn’t a drawback by default. In fact, this is the type of sound I seek out in workout earbuds. However, when I’m looking for a pair of earbuds to listen to longterm, I avoid a response like this since it can be distracting.

Is the mic any good? 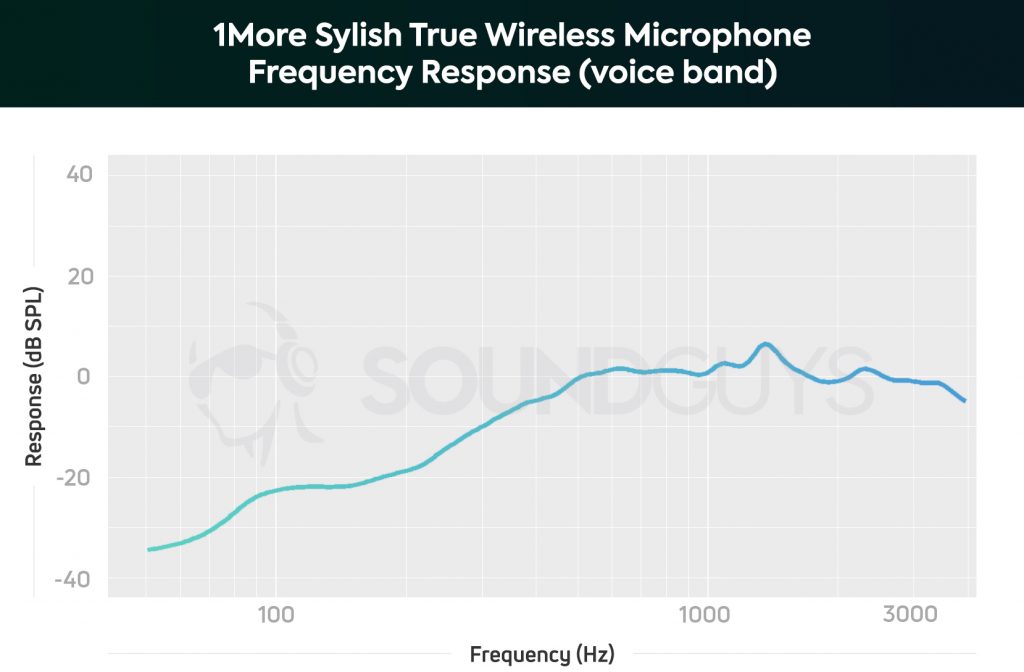 The microphone heavily attenuates lower frequencies, making them much quieter then they are. This can make male voices sound particularly unnatural.

As depicted by the mic’s frequency response chart above, the microphone isn’t great. Just like our headphone frequency response charts, the platonic ideal is a flat line along the 0-mark. The sharp incline from 10-500Hz means it attenuates low-frequency voices. Males, in particular, will sound unnatural when speaking through the 1More Stylish headset. Even my voice, while low for a female, sounds distant.

What’s more, while it attenuates some background noise, if you’re walking outside and happen to take a call, you’re better off just using your phone’s microphone. The internal MEMS microphone is no match for subtle winds. If you’re on the hunt for a viable headset for conference calls, we’ve curated an entire list here. 1More’s ANC earbuds are $100 cheaper than the Master & Dynamic MW07 Plus and offer a more comprehensive set of features.

ANC performance is good but can’t outperform the likes of Sony and Apple. Low-frequency reduction is minimal but takes the edge off of sounds like traffic and low-humming appliances. The 1More True Wireless ANC also reduce noise in the ear canal by way of an integrated digital signal processor (DSP).

How do the earphones compare to other alternatives? Bass frequencies are the star and often overpower vocals.

The 1More Stylish True Wireless earbuds have been met with increasing competition from cheap true wireless competitors. The Creative Outlier Gold is just a bit more expensive than the 1More Stylish and also supports aptX and AAC. Battery life with the Outlier Gold  is significantly longer than 1More’s earbuds on a single charge. Creative’s circular earbuds are more slippery than the 1More model, made even harder to hold by the fact that they lack a similar O-ring mechanism. However, that’s easy to forgive seeing as they’re much more durable with an IPX5 rating. Its elongated charging case takes up much more room than 1More’s

Another sub-$100 alternative to the 1More Stylish True Wireless earbuds are the Samsung Galaxy Buds. For about $10 more, you’re getting a better-sounding pair of ‘buds with an accurate sound signature, ambient sound controls, and a wireless charging case. However, the Galaxy Buds can only stream audio using AAC (best for iOS devices) and Samsung’s Scalable Codec, which is exclusive to Samsung Galaxy devices. If you’re using a non-Samsung Android device, you’re better off buying the 1More Stylish True Wireless, thanks to its support for the aptX codec.

The Anker Souncore Liberty Air 2 is another budget true wireless earbud to consider. It’s currently our top pick for the best true wireless earbuds under $100, offering excellent microphone quality, aptX and AAC codec support, Bluetooth 5.0, IPX5 water-resistance, and wireless charging. With all these features packed into such a portable and durable design, you’d be hard-pressed trying to find a better product for the same price.

Edifier and Anker also make great totally wireless earbuds retailing for less than $100. Although 1More is respected for its reasonably priced, high-quality audio products, standing out from the crowd is harder than ever.

If you’re not ready to commit to more expensive earbuds, 1More does a great job of providing all the necessities to the general consumer at an affordable cost. Listeners who are in search of the perfect commuter companion may want to reconsider headset style and look into over-ear headphones. There are plenty of excellent options out there from Sony, Jabra, and Bose.

Should you buy the 1More Stylish? If you need a sleek design, the 1More Stylish may be a justifiable purchase.

It depends. As mentioned above, there are better values out there when it comes to true wireless earbuds. However, if you can forgive the unreliable connectivity in favor of the strong bass response, stylish design, and solid battery life, then the 1More Stylish may make sense for you.

Still looking? Read up on our list of the best true wireless earbuds

Why should I get these instead of the 1More True Wireless ANC?

Is this covered under warranty?

Yes, all of 1More products are covered against defects, and this coverage lasts for one year from the date of purchase. This won't, however, cover water damage if the earbuds were submerged as the True Wireless Stylish are only sweat-resistant and did not receive an IPX7 or higher rating.

1More Triple-Driver review: What makes them worth it?