This covers all the bases you need in an affordable, if mediocre package. It gets the job done, but barely.

Tons of gaming headsets offer simple solutions and premium audio experiences to gamers of all stripes. However, not everyone is looking for one that costs $120 or more. The Razer Electra V2 is aimed at gamers who still want a decent, and easy mic/headphone combo without breaking the bank.

But is it any good?

Who’s the Razer Electra V2 for?

The Electra V2 comes with the bare minimum in the box.

The Razer Electra V2 is for gamers who want a simple solution to their audio needs with no bells, whistles, or added doodads. The wired headset is available with either 3.5mm connection or a USB connection, which is ideal for people who will use it exclusively with a PC. If you get the 3.5mm version (which I reviewed) it will also work for people who want more versatile headphones, with its removable mic and more convenient connection format.

The Electra V2 works well in environments with little background noise. Balconies can be great.

The Razer Electra V2 is not a comfortable gaming headset, but it should be. Its suspension band makes everything feel pretty light, but still feels pretty snug. Its headphone pads are made of a soft leatherette cushion. The mic is maneuverable, and works well enough in any position. However, using it for more than an hour still gave me frequent minor headaches.

The issue stems from the flexibility, or lack thereof, of the headphones. Rather than adding hinges where the headphones meet the frame, the Electra V2 headphones stay firmly in place, with no adjustment available. To compensate, the earpads are slightly raised from the headphones and can tilt to accommodate different head shapes. However, there’s only so much possible movement—they always ended up putting pressure right under my ears, where my connects to my head.

In the short term, this was fine. In the long term, it was seriously uncomfortable.

The headset is made of pretty solid materials, with an aluminum frame and hard plastic headphones. It feels sturdy enough, though bumping the frame can produce a vibrational hum that somehow always lasts for a few seconds longer than you’d expect (and yes, the mic can pick that up).

It’s not all bad, though. The suspension band is comfortable, and it doesn’t need any adjustment. The headset also feels really light, which is great.

The mic and volume switches feel sensitive and sturdy.

Thankfully, the Electra V2 isn’t the most intensely gamer-looking thing around, but it definitely has a lot of the visual hallmarks of a Razer product—mainly colored black, with bright lime green highlights lining the headphone pads. The cord is also the same shade of green. Glossy Razer logos shine against the matte texture of the headphones. There are also no obnoxious LEDs.

This headset is also very easy to use. There’s no software involved, so you can just plug in and get playing. There are volume and mute switches on the back of the left headphone, just where you’d expect it to be.

Gaming with the Electra V2

The suspension band of the headset is comfortable, but it can’t make up for the headphone pad design.

The Electra V2 offers stereo sound, but according to the box and the store page, it supports 7.1 virtual surround sound, through the Razer Surround software app. This is not the case—at least not anymore. Currently, Razer Surround only supports the Razer Kraken and Kraken X headsets. If you’re buying this headset expecting software support—don’t.

While the USB version of Electra V2 is compatible with Razer’s Synapse 2 app, the 3.5mm version doesn’t work with any of that. On Razer’s website, there’s no distinction made between the two models, which gives the opposite impression.

Normally, I’d actually feel pretty positive about not needing additional software to access a headset’s full features, but it frankly sucks that the headset is advertised with something it can’t do. It’s excusable on the box—this headset went on sale two years ago, after all—but the Synapse mention on Razer’s website is really misleading.

Of course, you’re also not really missing out on much—surround sound doesn’t make much of a difference in immersion or give much of a situational advantage most of the time. If you’re as middling at Fortnite as I am, 7.1 won’t change that.

The Electra V2 will work just fine with anything with a headphone jack.

Additionally, this being a 3.5mm headset, it’s compatible with just about everything, be it PC, Playstation 4, Xbox One, or Nintendo Switch. I spent considerable time using the headset with my Switch playing Cadence of Hyrule: Crypt of the NecroDancer Featuring The Legend of Zelda and had no issues.

In short spans, the Electra V2 was totally fine for playing most games. It didn’t struggle to offer clear sound in games like Fortnite, Realm Royale, and Overwatch, as well as Cadence of Hyrule.

How does the Razer Electra V2 sound? 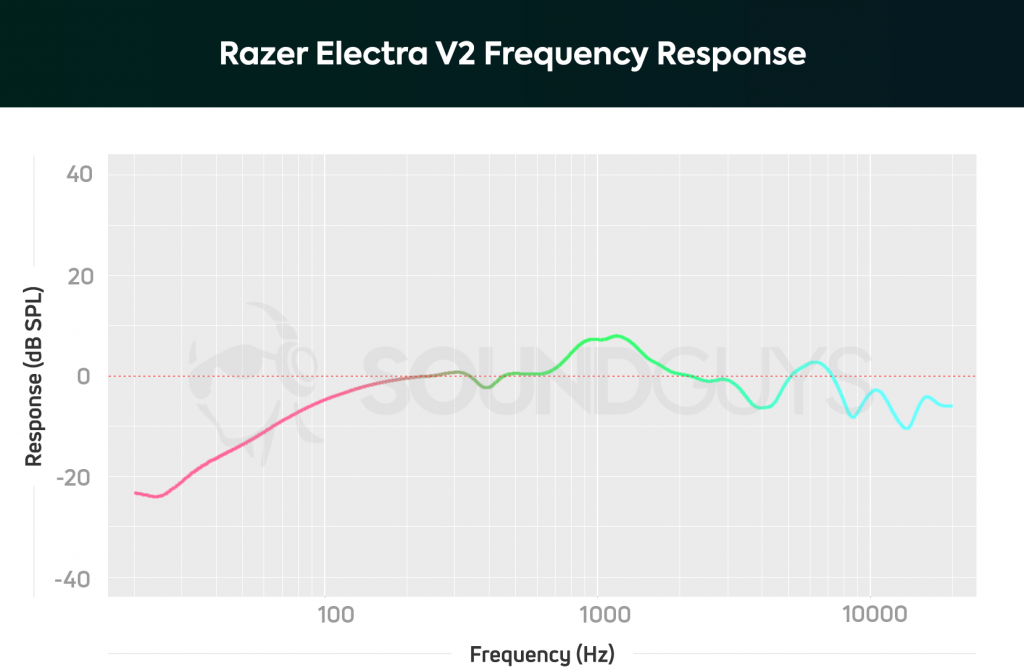 The Razer Electra V2 actually has a rather uncharacteristic sound profile for a gaming headset. Unlike other Razer offerings like the Kraken X and the Tiamat 2.2, the Electra V2 actually underemphasizes bass below 200Hz and boosts mids and highs. Typically, gaming headsets take the opposite approach, which you’d see represented on a frequency response chart as the line being higher on the left side of the chart—all to make explosion sounds go boom that much more.

In game, I actually don’t mind this approach. Explosions are typically the loudest part of whatever game they’re in. It’s unlikely you’ll have any trouble picking them out of the background, even with this reduced emphasis, and this balance means you’re less likely to miss the subtler sounds of games like Fortnite or Realm Royale, where audio cues like footsteps can really impact how you play the game.

The deeper sounding instruments of sweeping orchestral scores and bass drops EDM soundtracks of may get lost amid the sounds of strings, cymbals, and the like. However, the music of a game like Cadence of Hyrule, with its chiptune-inspired remixes, sounds great.

Outside of gaming, the Electra V2 offers a pretty average music experience. In the classic K-OS track Crabbucket, the bass guitar gets pretty hard to distinguish from the bass drum at times. Considering how prominent those parts are in the song, this really doesn’t offer the best experience.

On the isolation front, the Electra V2 struggles a little bit, with lower attenuation in the 1-2kHz range. This is likely because of the low range of motion on the headphones I mentioned earlier. I definitely felt like the headset never established a great seal around my ear most of the time. 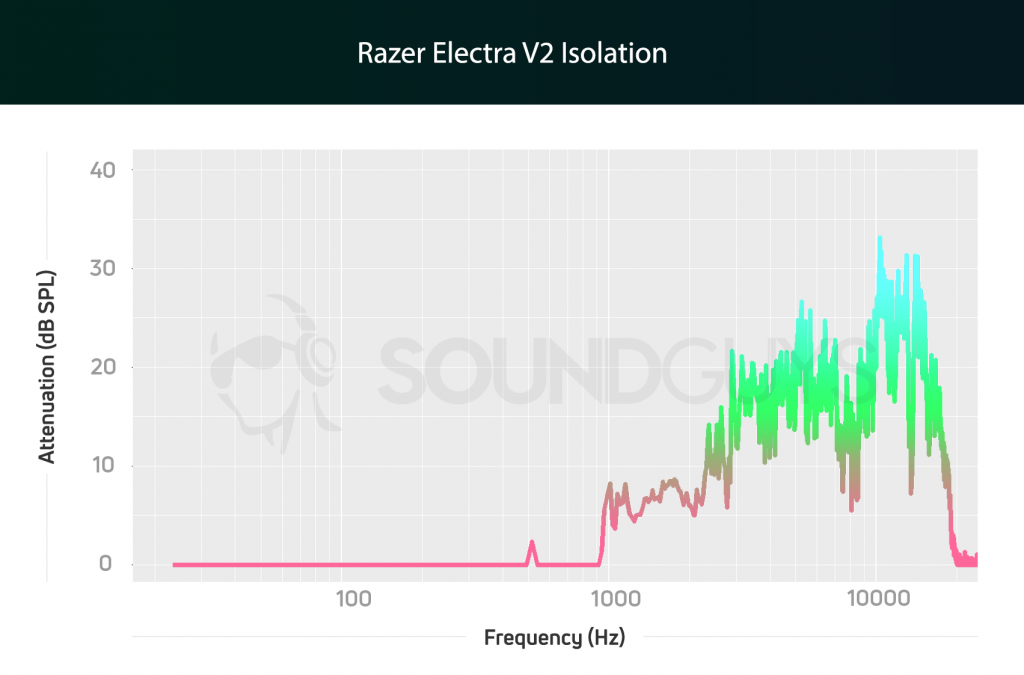 Home noises like loud roommates or TVs in the other room won’t come through loud and clear with these headphones, but they’ll be noticeable. Overall, the Electra V2 doesn’t offer as good isolation as many other gaming headsets, let alone headphones with ANC. 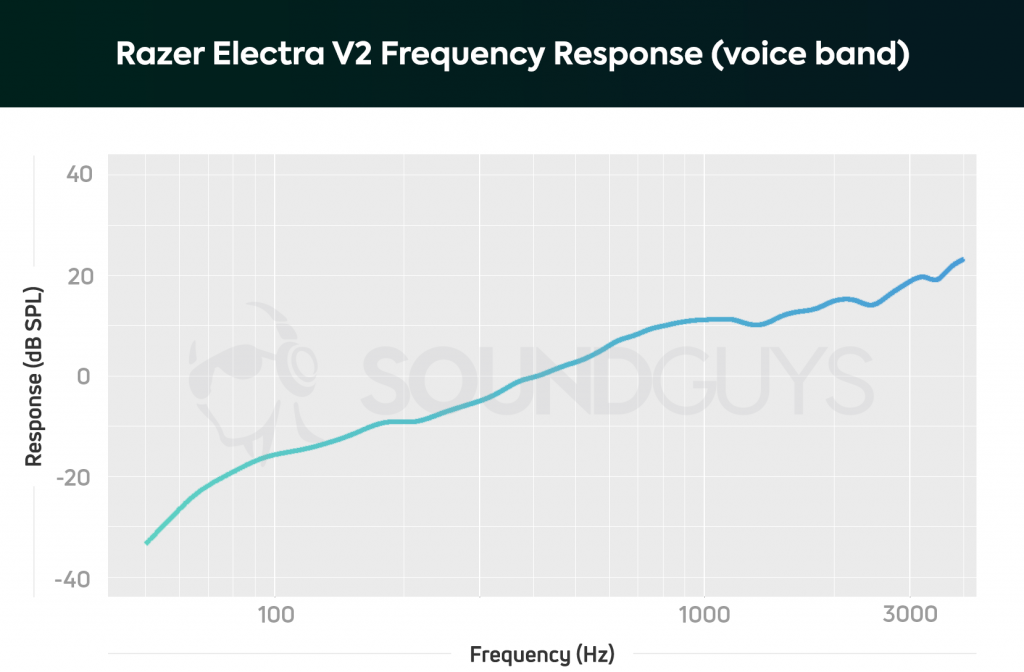 The Razer Electra V2 doesn’t seem to like to pick up bass all that much.

The Electra V2’s microphone offers clear enough output, with frequency response pretty well in line with most gaming headsets, but it seriously de-emphasizes low end sound and boosts highs. This means people with deeper voices will likely come across a little on the tinny side, and sibilant sounds (F, SH, and S sounds) will come across loud and clear.

Additionally, the mic seems a little more prone to catching breath sounds and wind than other similar offerings. It’s not a huge deal, you just need to spend a little more time getting the position right to avoid it.

It doesn’t sound great, but it gets the job done. Here’s how it sounds:

Should you buy the Razer Electra V2? 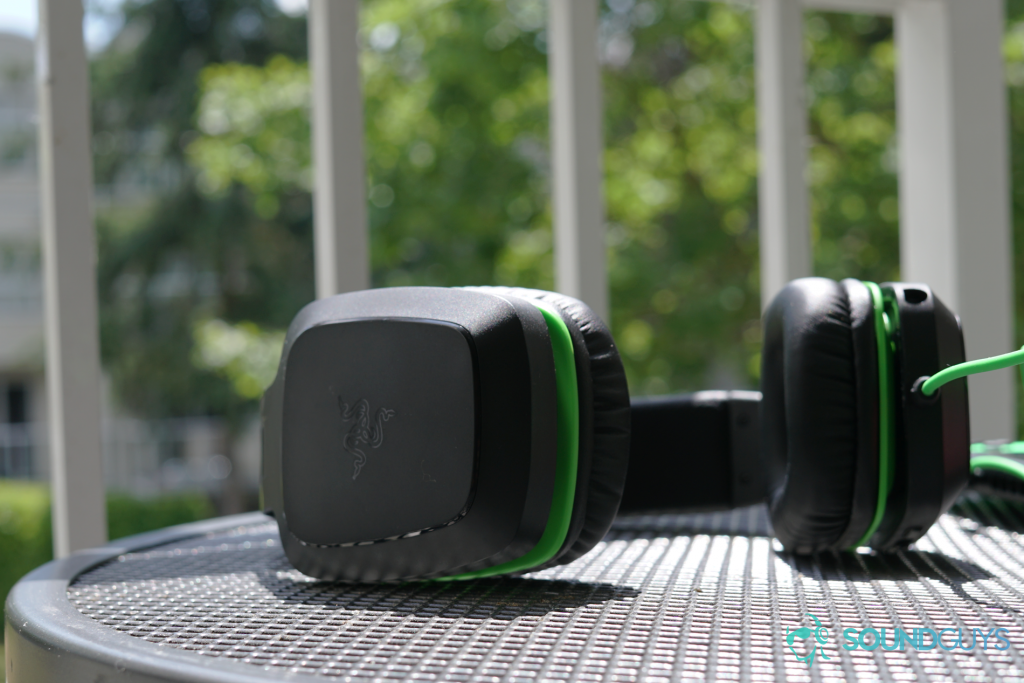 The 3.5mm mic is detachable, which is useful when out and about or when playing a game that doesn’t need it.

The Razer Electra V2 is a great example of a headset that cuts corners. Its build quality seems sturdy enough, but the simplification and lack of flexibility in the headphone design causes problems. These are the first gaming headphones I’ve used that consistently gave me headaches.

If you only play games for an hour at a time, this might be an okay headset for you. However, if you play games that little, perhaps buying a headset specifically for gaming isn’t the right move.

Even ignoring the comfort issues (which no one should), if you’re looking for affordable gaming headset, there are other far better options. The HyperX Cloud Alpha has far better audio, for under a hundred dollars. Razer’s own Kraken X is the same price as the Electra V2, and brings more accurate audio output both in the headphones and microphone.

The Electra V2 can get the job done, but it’s just not very good. There are so many better options—picking something else would be wise.