Stiff design takes getting used to.

The Razer Kraken 7.1 V2 is a decent gaming headset that covers the basics well, and doesn't do much else.

Gaming headsets have come a long way in the last few years. As twitch streaming has taken off as a huge force of content creation, and games like Fortnite have introduced a whole new generation to trials and tribulations of talking to rude teenagers on the internet.

The Kraken 7.1 V2 is for gamers, and that’s about it. They sound decent enough, but much like other gaming headsets, they’re meant as a convenient solution for those who want immersive gaming experiences in relative privacy, for relatively cheap. These are not the go-to headphones for gamers who also demand a HiFi audio experience.

In the box there’s the USB headset and quick start guide, and that’s it. There’s no adapter if you want to use the headset with your phone. There isn’t even a foam wind screen/pop filter for the mic, which is a pretty common inclusion for a gaming headset. The headset’s frame is made of black brushed metal.

The durable metal and plastic Razer Kraken 7.1 V2 is, in a word: simple. As gaming headsets go—especially coming from Razer—it has a pretty unassuming look, and it lacks a lot of the more garish visual flare typical of gaming peripherals. There are no random jagged edges or obnoxious streaks of clashing colors. Apart from the name, there’s not a lot here to remind you this is an edgy product.

The Razer brand sits embossed across the top of the cushioned band of the Kraken 7.1 V2, and is only particularly noticeable when the light catches it just right. The logos on the headset’s sides light up with colored LEDs, but they’re dim enough to stay relatively subtle. If its too much, you can always turn them off with the Razer software (more on that in a bit). The extendable mic has a relatively low profile, and retracts into the left headphone almost all the way. Despite the band, this isn’t the easiest headset to pop on and play. The headphones lack a horizontal left-right hinge, which made it occasionally tricky to get them to sit right on my head. We’ve talked about the importance of isolation quite a bit here at SoundGuys. It’s hard to get great results when you can feel the gaps between your head and the headphone pad.

I ended up getting them to fit well enough by changing their position on my head. It took a little getting used to, but was hardly uncomfortable.

The fully articulated microphone retracts almost fully into the headset, allowing you to get the perfect placement—or just stow it when you don’t need it. There’s a convenient button—the only one on the headset—at the tip of the mic for muting. Give it a click and the mic’s tip will light up red when it is muted.

How is the Razer Kraken 7.1 V2’s Surround Sound Gaming? These headphones are, to put it mildly, large.

The Razer Kraken 7.1 V2 headset offers virtual surround sound gaming. In a lot of cases, this didn’t greatly improve my experiences in games like Overwatch, Fortnite, Assassins’ Creed: Odyssey. Adding an increased emphasis on positional audio is occasionally useful in the quieter moments of Fortnite, but really doesn’t add too much.

This should go without saying, but surround sound won’t make you better at a game. I was bad at Fortnite before I started using the Razer Kraken 7.1 V2, and I’m still bad. It’s ultimately not meaningfully easier to determine the direction of a sound with these than with a stereo headset, or even a decent pair of speakers. Most games had myriad visual cues compensate for what little difference there was.

What can the Razer Synapse software do? The Razer Synapse software offers all sorts of customization options.

Like almost all Razer gaming peripherals, the Kraken 7.1 V2 functions best paired with the Razer Synapse software. With Synapse, you can customize the headset’s Chroma lighting options. You can set a static color of your choice, make the color shift across a spectrum, or set it to “breathe,” which makes the color fade in and out.

Many gaming headsets offer physical volume controls, but the Kraken 7.1 V2 has no such feature. That might not sound like a big deal, but if you’re playing a game, using Discord, and listening to music all at once—a fairly common scenario on PC—sometimes it’s nice to just reach for a dial on the cord.

Additionally, if you’ve already got Synapse set up with newer Razer gear, you might be in for a surprise: The Kraken 7.1 V2 doesn’t support Razer’s Synapse 3 program. If you want access to its settings, you’ll need to install an older version of the software. 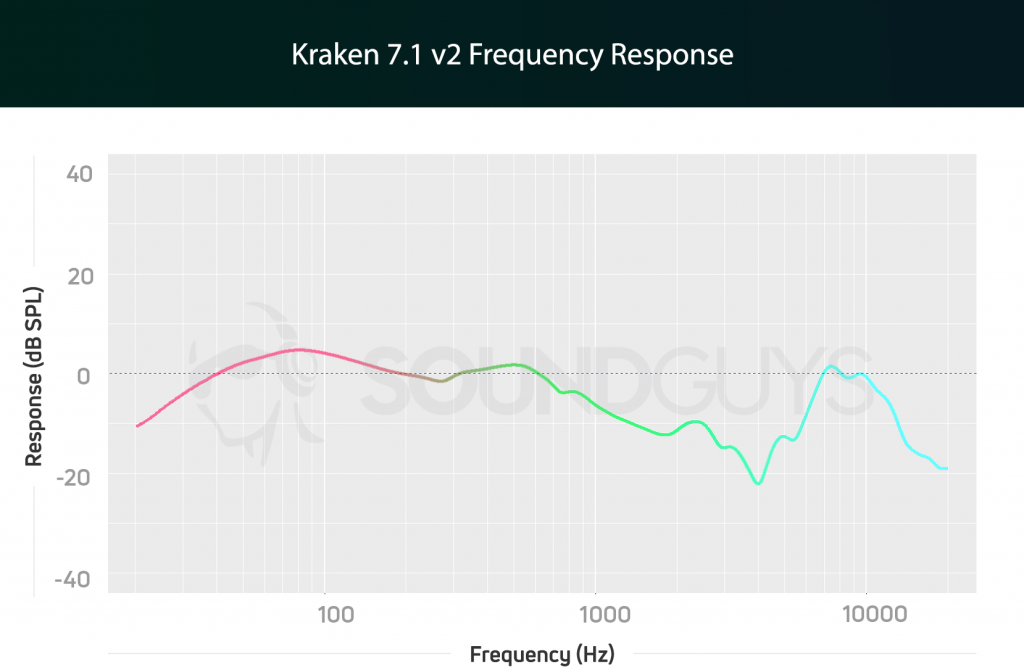 The Kraken 7.1 V2 is hardly an audiophile’s dream. While there’s nothing particularly bad about its output, it really emphasizes bass over mids. For music that means things like cymbals and strings can get a little masked by particularly loud bass lines. This is what happens to the high hat and the guitar in James Brown’s I Got Ants in My Pants (and I Want to Dance).

For games, the experience is a little more of a mixed bag. Increased bass emphasis can be great to make explosions really stand out. If you’re aiming for an immersive experience in a single player game, that can be great. If you’re playing something like Fortnite, or another multiplayer game, having the quieted mids can actually be pretty detrimental to the experience if you like to listen at lower volumes. Sure, you’ll hear the gunfire and explosions great, but hearing footsteps and other minor audio elements can be just as valuable, especially with a surround sound headset like this.

There are some ways around this. You can change the loudness at frequencies from 125Hz to 16kHz with the Synapse EQ controls, using presets or manually adjusting the sliders. You can also change how different games emphasize the sound they output in their own settings menus, though the options vary wildly by game. If you have roommates or particularly noisy neighbors, the Razer Kraken 7.1 V2 does a pretty good job blocking out the kinds of sound that can be particularly obnoxious in-game. While low hums make it through, you won’t be troubled by the noises of traffic outside or someone talking in the other room. 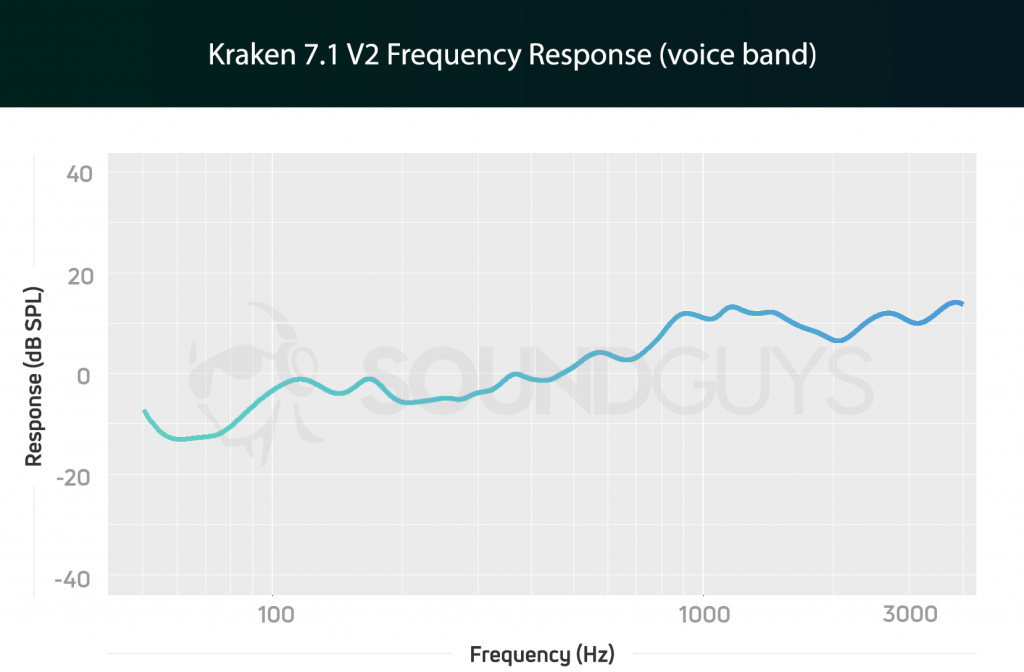 The microphone is a little mid-heavy, but you definitely won’t lose any vocal detail if you have a lower-pitched voice.

The Kraken 7.1 V2’s microphone offers pretty clear audio, all things considered. As the chart shows, the mic boosts frequencies in the 1-3kHz range, where a lot of high pitched noises that make our voices sound normal are, so it won’t sound like you’re talking through a tin can. However, lower-pitched voices may sound a little weaker than they should. The mic extends and can bend to just about whatever position you like. The red light indicates it is muted.

I never had any issues with clarity, nor did I ever get any complaints from those who I spoke to on Discord. Admittedly, any issues there could have been connection-based, but it’s comforting to know this product works well in that use-case all the same.

The Razer Kraken 7.1 V2 is a solid and simple gaming headset. It’s comfortable enough and sounds good enough to suit your needs, regardless of what game you’re playing. The surround sound doesn’t add much to the gameplay experience, but it still sounds pretty neat. If you’re worried about the microphone, don’t be—though you could always simply spring for a gaming mic if you like your old headphones.

However, there are some more glaring drawbacks, too. Having to rely on an old Synapse version to access the settings is a drag, especially when the Kraken 7.1 V2 isn’t much older than the current program. The lack of horizontal articulation can make getting a decent seal pretty inconvenient. It took a little doing for me and I have a pretty average sized head.

If you’re already hooked into Razer’s older software ecosystem—something much of its hardware still uses—and you want something to make the explosions go boom even bigger, the Razer Kraken 7.1 V2 is definitely worth considered. It doesn’t take much fiddling to set up and does what a gaming headset needs to solidly.