Aukey 7.1 Gaming Headset review: Why is my voice a whole note lower?

Solid construction with a microphone that reproduces voices in a lower register.

These headphones prove that you don't have to invest in something like Razer or Turtle Beach for a decent gaming headset. The headband's suspension mechanism provides a comfortable fit, while the large control module makes it easy to identify the buttons, which is crucial mid-game. For $49, this is a well-built option for gamers.

Gaming can be a testosterone-charged domain, which perhaps explains why the Aukey 7.1 Gaming Headset lowers players voices when relayed over the built-in boom mic. Whether this is a feature or a quirk is subjective, possibly dependent on the lilt of your voice. Despite this odd characteristic, the $49 headset proves it can hold its own among more expensive alternatives.

Who is the Aukey 7.1 Gaming Headset for? 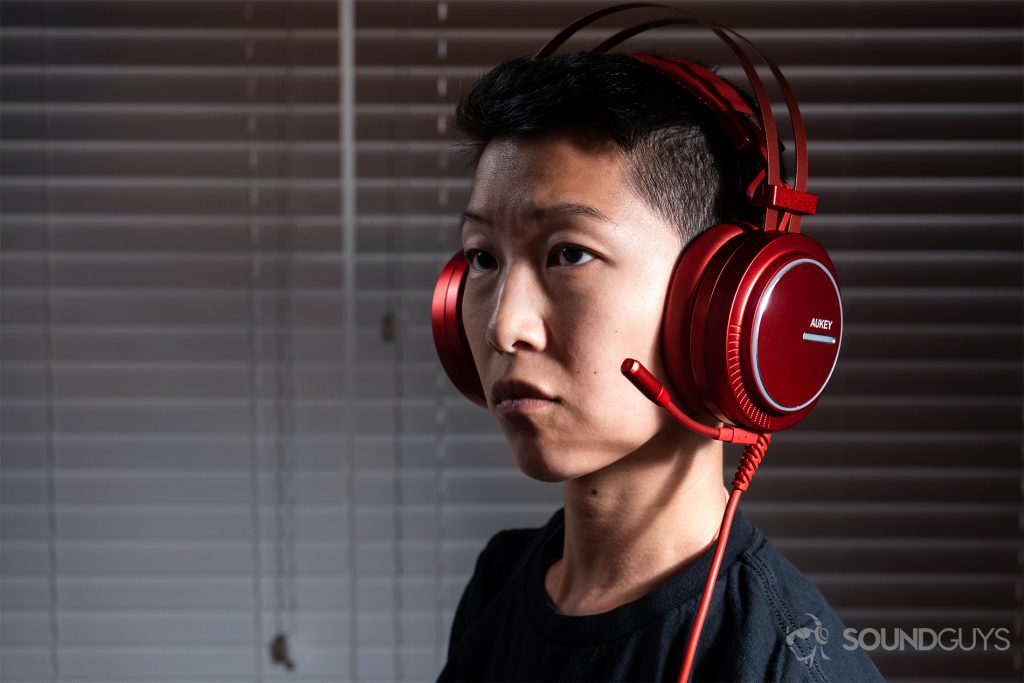 The large ear cups weigh heavily, but fatigue is delayed due to the headband suspension.

You may have deduced by the name that this headset is intended for gamers. Although technically anyone may use it, there exist gaming-specific features that may be undesirable for general consumers. For instance, the large control module is easy to command blindly, but weighs heavily and looks unsightly. Additionally, the boom mic is non-removable which could be annoying for those looking for leisure headphones.

How is the Aukey 7.1 Gaming Headset built? The integrated control module lets gamers adjust RGB patterns and toggle the microphone on the fly.

Large plastic ear cups are joined by a forked metal headband fastened above a suspended, adjustable cushion. Despite the cheap nature of plastic, the metallic sheen on the ear cup housings looks nice and is complemented by the LED rings lining the perimeter.

The memory foam ear pads are tenuous compared to the plushness offered by the Sony WH-1000XM3 or Bose QuietComfort 35 II, but the Aukey 7.1 Gaming Headset also costs just $49. With that price comes another compromise: it lacks yolks to facilitate ear cup rotation, which can cause discomfort with glasses. The adjustable headband counteracts the heavy ear cups, but only for so long.

On the left ear cup, a flexible boom mic lets users communicate with virtual teammates during a raid. Just like the USB cable descending from the same ear cup, the microphone measures a bit short but still registers and relays voices effectively.

The integrated control module sports five raised buttons that gamers can use to adjust volume, mute the mic, toggle 3-D sound settings, and cycle through RBG lighting presets. To EQ the sound, gamers should download the company’s Scepter Sound Software. Unfortunately, though, its use is limited to PC owners. 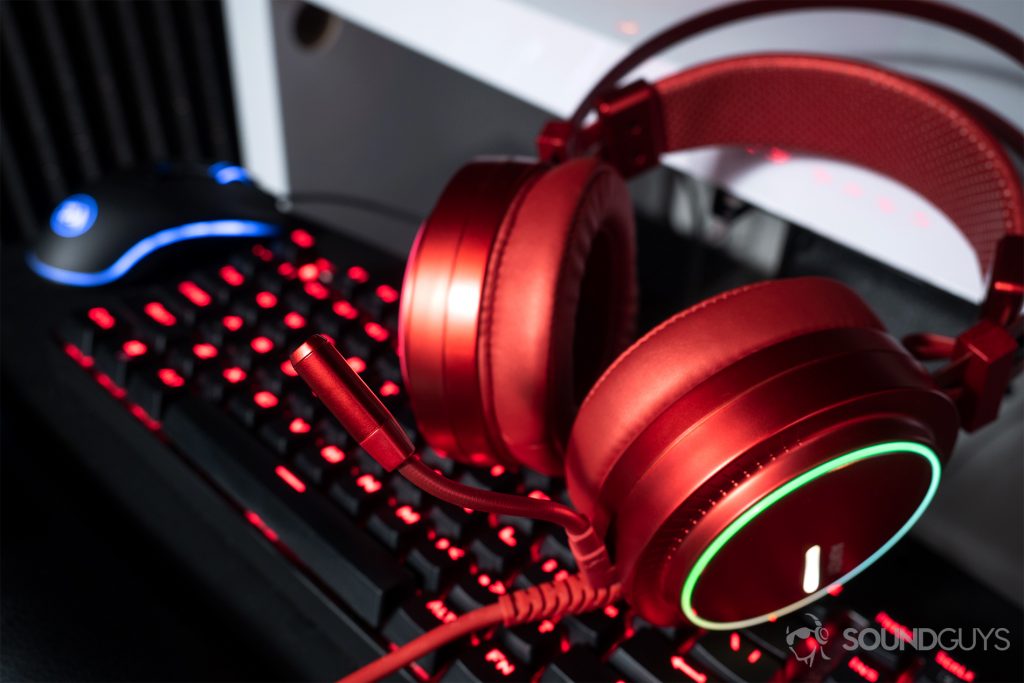 Listeners are granted a realistic sense of spatial awareness, but the sounds lack clarity.

The surround sound is immersive and creates a more accurate sense of spatial awareness than general-use in-ears. Generally speaking, clarity could be improved: when playing League of Legends and firing a champions “ultimate power,” it’s hard to perceive environmental noises, which can be detrimental in a tournament setting.

This part is strange. The omnidirectional microphone lowers the speaker’s vocal register, which is jarring. At first, I thought the review unit was faulty but then realized that others experienced this same issue. It makes me sound like a pubescent boy, to which you may be thinking, “What’s new?” Touché, but it really is a disorienting difference. Even speaking in a higher pitch, still sounds like it’s being transposed down. 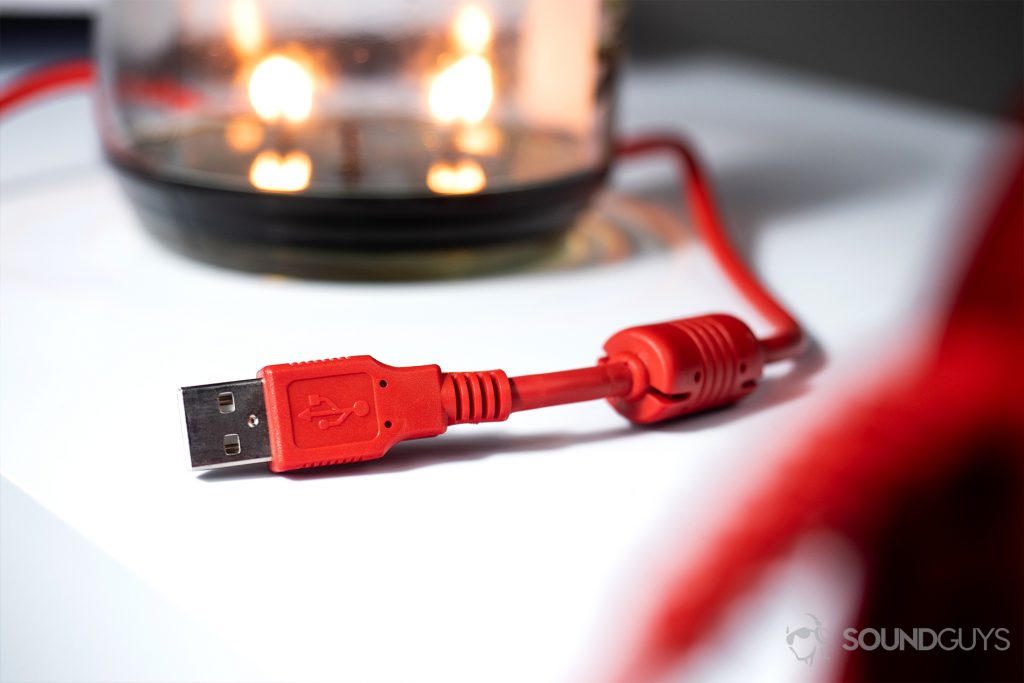 The US-A connector is well-reinforced and seems resistant to fraying.

Plug-and-play headsets like the Aukey 7.1 Gaming Headset are great because it requires less time fussing around with setup and more time spent actually gaming. The 2.2-meter USB-A cable allows for plenty of movement in my cramped office corner, but that may still prove short for some. At the termination and exit from the ear cup, the stress relievers are substantial and rid the mind of cable-fraying concerns.

How does the Aukey 7.1 Gaming Headset sound? For a sub-$50 pair of gaming headphones, the sound is surprisingly neutral-leaning. An emphasized low-end helps make explosions sound more present, while the 2.5kHz spike is useful for more audible vocals be it in-game or from your teammates.

Although the frequency response/a> is a pleasant surprise, clarity is expectantly disappointing. Lows easily mask mids, which can prove detrimental to a crucial moment. What’s more, isolation leaves plenty to be desired as the headphones are unable to attenuate low-frequency noises, likely due to the hard-to-achieve seal and sub-standard materials.

The vocals in the Head and the Heart’s song Ghosts, require effort to hear beyond the into Am-E piano chord progression. Even during the intro, which is occupied by just the piano, detail is lacking. Listeners get a feel for the eerie mood, but auditory detail is nonexistent. Beginning at 1:06, the band’s “dos” usually resonate clearly but are difficult to distinguish even when the only competing sound is the piano.

Treble sounds are even more difficult to identify as demonstrated during the verse at 1:54. The intermittent tambourine hits struggle to maintain a presence, but when listening with the Audio-Technica ATH-M40x it’s easy to recognize.

Should you buy the Aukey 7.1 Gaming Headset? 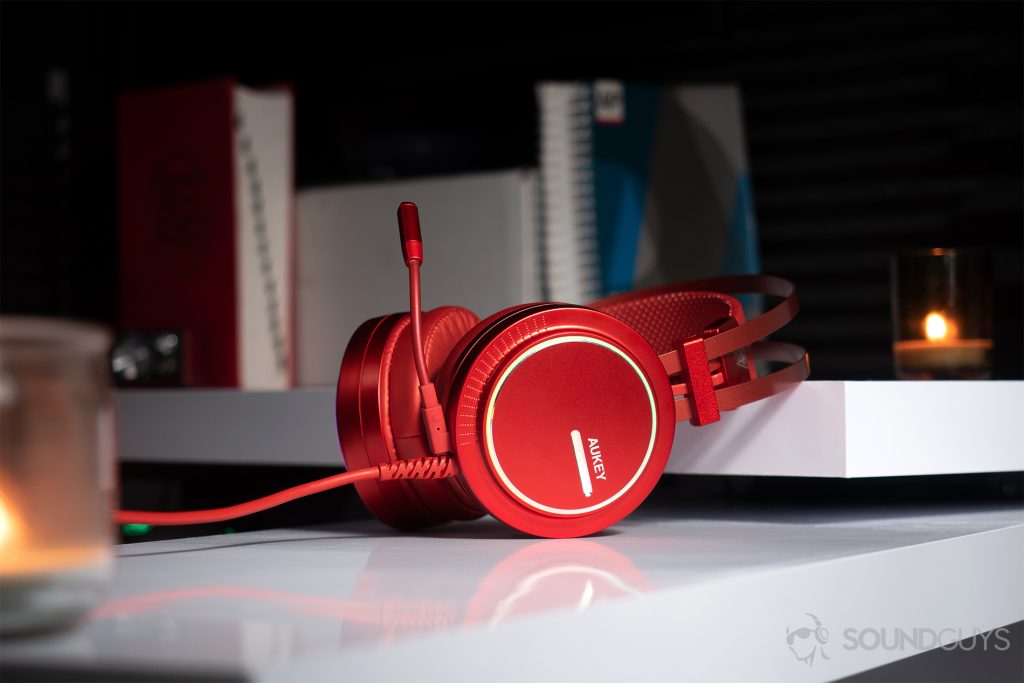 For just $49, this headset makes for a great gift this holiday season.

Despite its flaws, the Aukey 7.1 Gaming Headset is an undeniably solid value. The non-rotating ear cups are annoying but the headphones remain comfortable regardless. Additionally, the microphone does a good job relaying the speaker’s voice, even if it does so at a lower frequency. The RGB lighting isn’t too ostentatious, but it’s obvious enough to add a bit of flair to an otherwise plain gaming headset. If you don’t take gaming too seriously and just want a headset that looks cool and functions well, this is an affordable contender.

Aukey 7.1 Gaming Headset
7.8
Get into Your Game The AUKEY Scepter Series GH-S5 Gaming Headset has powerful audio performance to revolutionize your gaming. Along with stunning sound, it’s designed for comfort and practicality. Elevated Gaming Audio Immerse yourself in epic game worlds, track down enemies, experience rumbling explosions. The enlarged 50mm drivers deliver dynamic sound with enhanced bass. The ‘GH-S5 Scepter Sound Software’ (free from the AUKEY website; for Windows PC only). Comfortable Headphone Fit The earpads (made with a soft and durable leather-like material) cushion for comfort and seal against external noise to improve sound quality. The expanding headband self-adjusts for perfect fit without fuss. Practical & Desirable Design The built-in mic bends into position so you’ll be heard loud & clear. The integrated 2.2m / 7.22ft USB cable is tough & tangle-resistant. It features an accessible inline remote with volume, 3D sound effect, microphone mute, and RGB lighting effects buttons. The RGB LED ring and horizontal accent glow in a spectrum of colors (with steady, fading in & out, or circling pattern) or cycle through each vibrant color. 24-Month Warranty Whether it’s your first AUKEY purchase or you’re back for more, rest assured that we’re in this together: All AUKEY products are backed by our 24-Month Product Warranty.