The Jabra Elite 3 might not have all the additional features you want, but it's cheap, sounds good, and is easy to use.

The Jabra Elite 3 is the company's cheapest true wireless product to date. The inclusion of aptX is rare under $100, and the earbuds come close to nailing fundamentals like audio output and isolation, but is that enough to make it stand out?

If you’re on the hunt for true wireless earbuds, finding a budget pair that checks the boxes can be hard. If you don’t mind spending $200 USD, you can find something that does a little bit of everything, or you can spend a lot less to get something that handles just the basics. If crossing that hundred-dollar line is too much and you’re intent on something with aptX support, the Jabra Elite 3 may strike just the right balance.

The Elite 3 is the cheapest pair of true wireless earbuds Jabra has ever released. Is affordability enough to justify the buy?

Who should get the Jabra Elite 3? 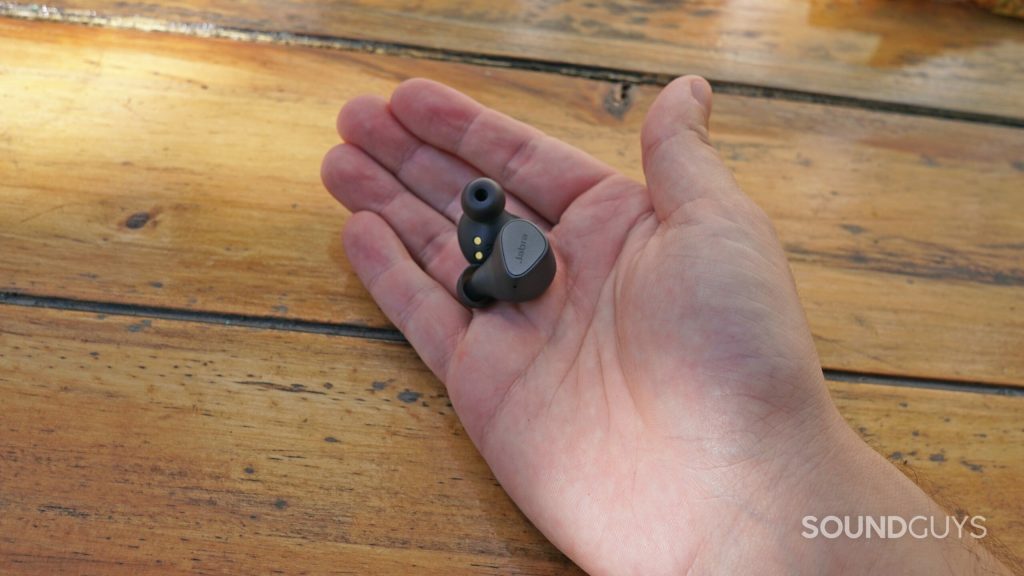 The Jabra Elite 3 is a pretty simple product, and that’s a good thing. There aren’t a ton of bells and whistles here, which means it’s easy to put the earbuds in and start listening.

Made primarily of plastic, the Elite 3 has a fairly generic look, with a shape designed to nestle into your ear. These true wireless earbuds fit securely, though there’s nothing like hooks or fins for added stability, which means achieving a decent seal is especially necessary—luckily the Elite 3 comes with additional silicone tips, so finding the right fit won’t be too hard.

The earbuds are IP55 rated, which guarantees protection from jets of water (not submersion) along with dust and small objects. This makes Elite 3 a great option for those inclined to partake in outdoor activities—you won’t have to worry about getting caught in the rain, or the dirt and grime of the hiking trail. However, while the buds are durable, the case doesn’t feel terribly sturdy—it’s made of lightweight plastic, and the magnets inside do well keeping the earbuds in place, but the hinge feels pretty flimsy. 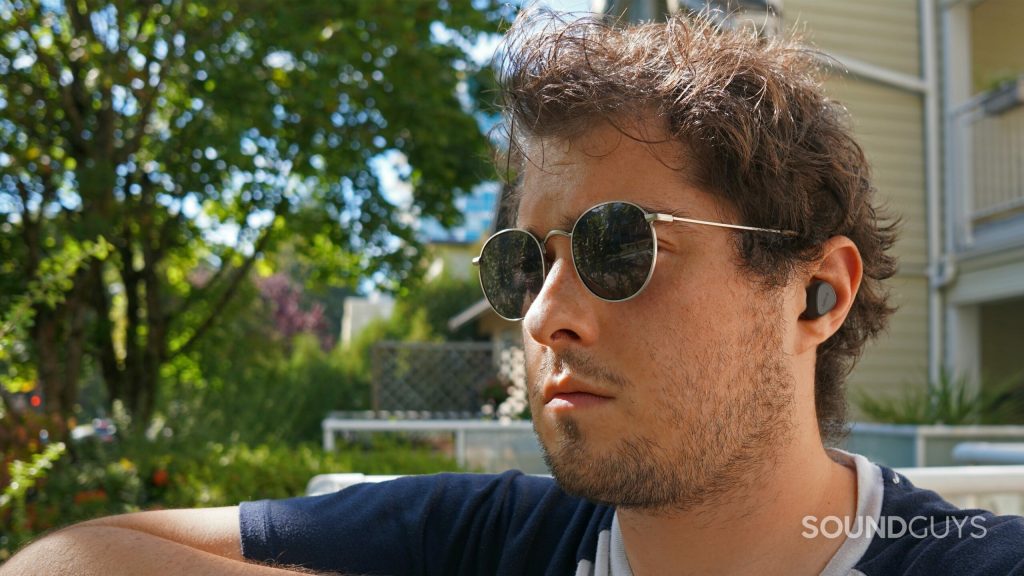 These are really comfortable and lightweight.

Once you get the earbuds comfortably in, using them is pretty simple. The Jabra Elite 3 features a multifunction touch panel on each earbud (it’s the plate with Jabra written on it) and a series of taps affords a decent degree of control. On top of the usual, single, double, triple tapping (the right earbud) to control playback, skipping, and going back a song, you can also press and hold the right or left button to raise or lower volume respectively. A double-tap of the left earbud summons your phone’s virtual assistant. One tap of the left earbud enables HearThrough mode, which uses the microphones to filter in outside noise and keep you aware of your surroundings.

Here’s a full rundown of the Elite 3 controls:

The Jabra Elite 3 uses the free Jabra Sound+ app (iOS and Android) to bring a few additional features, and it’s helpful during the initial pairing process, so it’s definitely worth a download.

That edit widgets button lets you rearrange the options on the page, but there are only two features right now, so it’s an odd addition.

Sound+ is pretty simple and currently, it lets you toggle the HearThrough mode, cycle through EQ presets, and update the Elite 3’s firmware. The app feels like it’s made for more features, given its “edit widgets” button, but currently, it only lets you arrange whether the EQ presets are above or below the HearThrough window. The app also brings Spotify integration, and the ability to set your voice assistant to Alexa instead of whatever’s built-in on your Android phone.

Installing the app also activates quick settings controls in the notifications section of your home screen. Just pull down the menu and you can toggle HearThrough and get a live battery reading.

What Bluetooth codecs does the Jabra Elite 3 support?

Opening the home screen dropdown menu presents you with a few control options.

The Jabra Elite 3 supports the default SBC codec alongside the high-quality aptX codec. If you’re an Android user, aptX access is great, but iPhone users will have to stick with SBC, as the Elite 3 doesn’t support AAC. It uses Bluetooth 5.2, which means it could one day support the new Bluetooth LE audio standard and LC3 codec.

The Elite 3 maintains a steady connection once it’s paired, but the initial pairing process can be a little bit of a hassle. As a device that supports Google Fast Pair, a connection card should pop up on the screen of your Android device when you open the earbuds charging case, however until you install the app, that process will fail consistently. Once everything’s set up, the earbuds easily and automatically reconnect with your device without issue. The earbuds don’t support Bluetooth multipoint.

How long does the Jabra Elite 3 battery last? 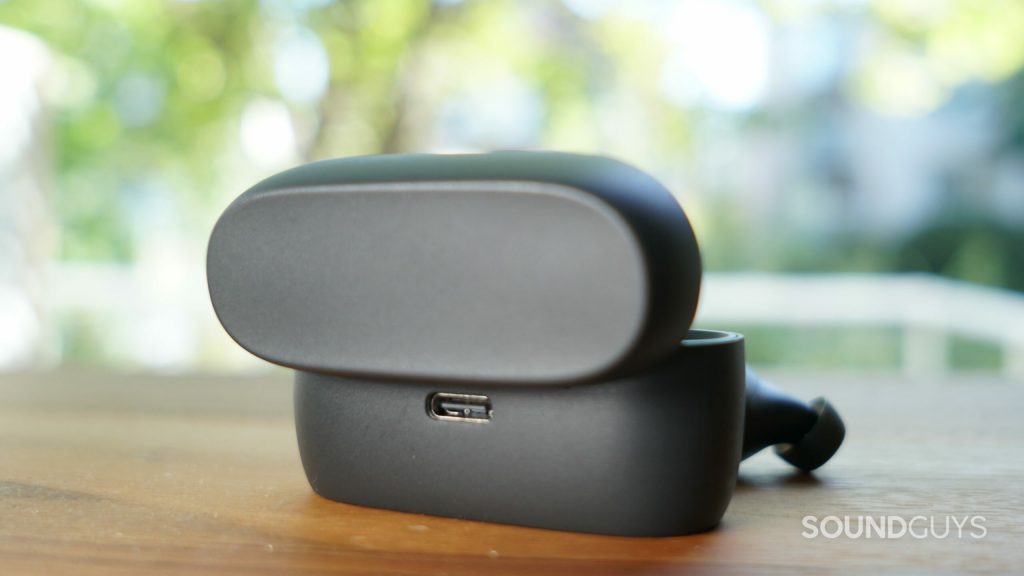 There’s no wireless charging, but USB-C fast charging is nice.

According to Jabra, the Elite 3 can last up to 7 hours on a single charge, and in our testing, we found it got pretty close. At a consistent output of ~75dB(SPL), the left earbud for the Jabra Elite 3 lasted 6 hours, 48 minutes and the right earbud just a little longer at 6 hours, 55 minutes. Jabra also claims that there’s enough for three full charging cycles in the case, bumping overall battery life to around 28 hours, and we haven’t experienced anything to call that into question.

Read on: How long do AirPods last, and can you make them last longer?

The charging case doesn’t support wireless charging of any sort, but fast charge is available. Just 10 minutes in the case will fill the Elite 3 buds with an hour of playback time.

How does the Jabra Elite 3 sound?

Bass sounds come through a little louder than we’d like, but they still sound nice.

Compared to our target curve (pink), the Jabra Elite 3 (cyan) actually sounds quite accurate. There’s a little more bass emphasis than we generally look for, but otherwise, the earbuds output nicely emphasized highs and mids. This measurement comes from the default Neutral EQ preset, but in the app, you can pick between easy-to-parse options like Bass boost, Treble boost, and Speech, as well as the more nebulous Energize and Smooth presets. There’s no way to create a custom EQ profile in Jabra’s app.

Music of most genres should sound pretty nice coming through the Jabra Elite 3. Listening to Beside April by BADBADNOTGOOD, pretty much every instrument sounds quite nice, from the crash of the cymbal to the organ sounds that harmonize with the rhythm guitar. The added bass emphasis makes the reverberations of the kick drum and the bass guitar linger a little louder than it feels like they should, but not so much that it makes anything else difficult to hear.

How well does the Jabra Elite 3 block out background noise?

This is pretty average stuff—not bad, but hardly groundbreaking.

The Jabra Elite 3 features isolation performance well within the norms of true wireless earbuds without active noise cancelling (ANC). If you have the right size ear tips to establish a decent seal, you shouldn’t run into much trouble in most places with a moderate amount of noise. Busy nearby traffic or loud cafe settings won’t get blocked out much, but that’s not always a bad thing—if it was really a good idea to not be able to hear the noise of oncoming cars, the Elite 3 wouldn’t have included a HearThrough mode, after all.

Can you use the Jabra Elite 3 for phone calls? 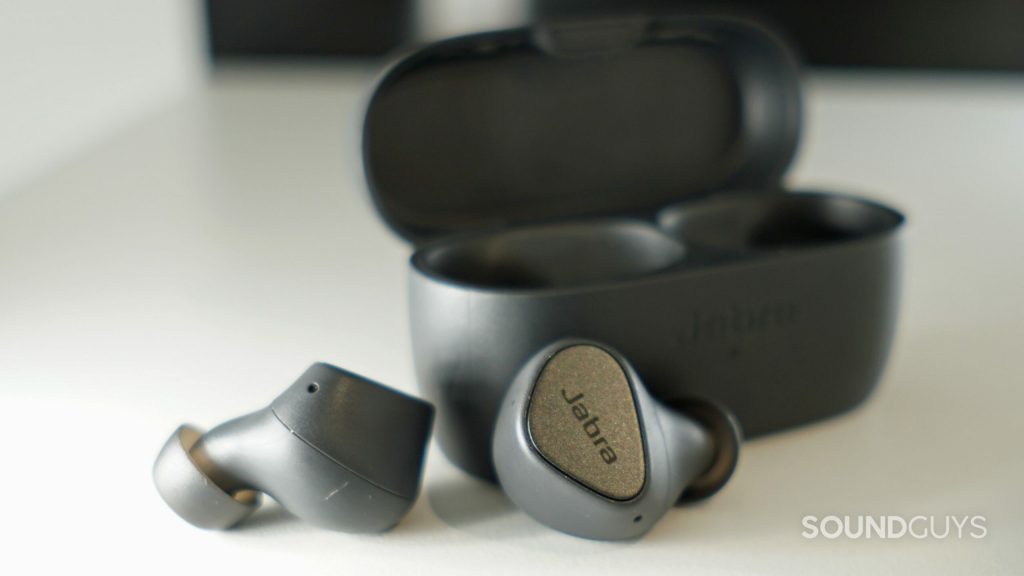 The microphone is pretty unremarkable.

Given the price, it shouldn’t be too surprising that the Jabra Elite 3 microphone sounds pretty average. This true wireless earbud microphone is relatively clear, though it doesn’t do a terribly good job of blocking out environmental noise. It’ll do for a quick phone call, but not much else. Listen for yourself:

The Jabra Elite 75t earbuds look a little different from the Elite 3, but the case is almost identical.

Jabra’s made a lot of Elite true wireless earbuds in the last few years, and the Jabra Elite 75t is one of its best. If you have an iPhone and the lack of AAC is all that’s standing in your way, these true wireless earbuds could be for you—the Elite 75t doesn’t feature aptX, but AAC is definitely present. The Elite 75t also brings ANC, though it’s hardly the best around in that regard. On top of that, you get the same IP55 rating, USB-C charging, and slightly better battery life.

The Jabra Elite 3 definitely hews a little closer to our target curve at various points on the frequency spectrum, while the 75t has a more workout-friendly sound with its generously emphasized bass notes. The biggest software difference between the Elite 3 and Elite 75t series is that the latter lets you create a custom EQ in the My Sound+ app.

Price is still a pretty big differentiating, though—the Jabra Elite 3 runs for $79.99 USD, while the Jabra Elite 75t has an MSRP of $149.99 USD, almost double. However, the 75t came out a couple of years ago at this point, so you may be able to find a discount if you hunt around.

Should you buy the Jabra Elite 3?

If you’re in the market for a reliable pair of true wireless earbuds on a budget, you should consider the Jabra Elite 3. 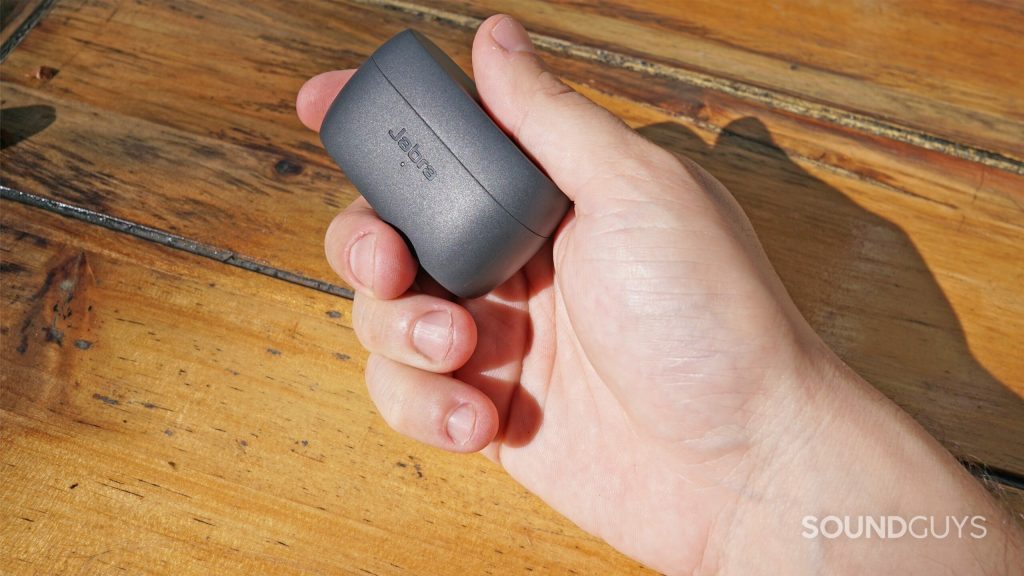 The case is a little on the large side, but narrow enough to fit in a pocket without issue.

These true wireless earbuds are easy to use, they sound good, and they offer very solid combined battery performance. There’s not much more to them, but for under $79.99 USD, having a lot of extra features was never really on the table. I have concerns about the long term durability of the case, but most true wireless earbud charging cases have flimsy feeling hinges. The bottom line is this is a great choice for the budget-conscious consumer.

Jabra Elite 3
All prices listed in USD unless otherwise specified. Prices may change over time, and vary by region. Unfortunately, we cannot list Amazon prices on the site, as they vary greatly by currency.

The Jabra Elite 3 isn’t a terribly Apple-friendly product, so people with iPhones should probably look to one of the myriad options more tailored to their needs first. We don’t love the Apple AirPods because it doesn’t seal to the ear, but true wireless options like the Anker SoundCore Liberty Air 2 and the Amazon Echo Buds (2nd Gen) are very reasonably priced and come with support for the AAC audio codec. Both of these options also support setting custom EQ profiles, so they may be attractive if being bound by the presets of the Sound+ app doesn’t appeal to you.

Next: The best true wireless earbuds