EPOS and Sennheiser's last hurrah together is yet another expensive and decent gaming headset. Is that good enough, when $100 will get you something great?

Isolation
Comfortable
Easy to use

Tightness is a problem for glasses
Price

EPOS and Sennheiser's last hurrah together looks almost identical to the last couple GSP headsets, and performs a lot like them too. This is good gaming headset, but boy is it expensive for what you get.

Sennheiser has put out some decent—albeit expensive—gaming headsets in partnership with EPOS for years. Now EPOS is striking out on its own as an independent company, but before it can really start shaking things up: it’s got one last jointly developed headset to show off. The EPOS Sennheiser GSP 602 has all the visual hallmarks of a GSP series headset, but with a slightly pared-back feature set.

Fundamental elements like audio and mic quality have been somewhat rough parts in this product line. Does the EPOS Sennheiser GSP 602 finally nail it?

Who is the EPOS Sennheiser GSP 602 for?

This is essentially a new color variant of the GSP 600. There’s also a black and white GSP 601 model available.

At a glance, the EPOS Sennheiser GSP 602 is kind of an intimidating gaming headset. It’s got a big bulky plastic frame, with a hinge system at an odd angle, and a boom microphone that looks more at home on the sidelines of a football game than at a gaming PC. However, after just a couple minutes: it’s not so bad—in fact, there’s really not all that much to using it.

This wired gaming headset connects via 3.5mm to your PC or console of choice. It’s made primarily of plastic, but still feels pretty sturdy—there’s a heft here that you don’t often get from headsets without a ton of metal. The headband features adjustable tension sliders, and a thick mesh-covered cushion. The headphones themselves sport thick leatherette-covered pads, which have a mesh layer on the inside of the ear cup to help with heat buildup.

This headset clamps down pretty hard, but not so hard to be uncomfortable.

In short, the EPOS Sennheiser GSP 602 is very comfortable, and it doesn’t take much work to get it that way. The headband is easy to adjust, and the hinges provide a wide range of movement so people with different head shapes shouldn’t have any issue. It clamps down tightly, and achieves a decent seal very easily, though gamers with glasses will struggle to establish one with the leatherette ear pads—EPOS sells replacement pads for the GSP 601, which will work on this model as well, but don’t match the color. There’s also no velour option (a bummer for our bespectacled friends out there).

Actually using the headset is really easy. You can mute the attached boom mic by flipping it up, and there’s a big volume dial on the right ear cup, and that’s really all there is to it. There aren’t any other buttons or hardware features to think about, and no software either. The headset comes with two detachable 3.5mm cords—one ending in a single TRRS plug for consoles, and one ending in a split mic/audio jack for PCs that need it.

Gaming with the EPOS Sennheiser GSP 602

The TRRS cord option makes connection to consoles a cinch.

Gaming with the GSP 602 is totally solid, if a little unremarkable. There aren’t any bells and whistles here like virtual surround sound, so what you’re left with is a pretty standard plug-and-play experience. Even though the headset clamps down with a pretty decent amount of force, I never felt any negative tension even after multi-hour sessions.

Games like League of Legends and Dauntless on PC, or Control on PlayStation 4 sound great. You may want to find something with surround sound for games like Valorant or Fortnite, which rely on more granular positional audio cues. However, if those aren’t games you play, or you’re only casually interested in them, you shouldn’t have much issue.

How does the EPOS Sennheiser GSP 602 sound? 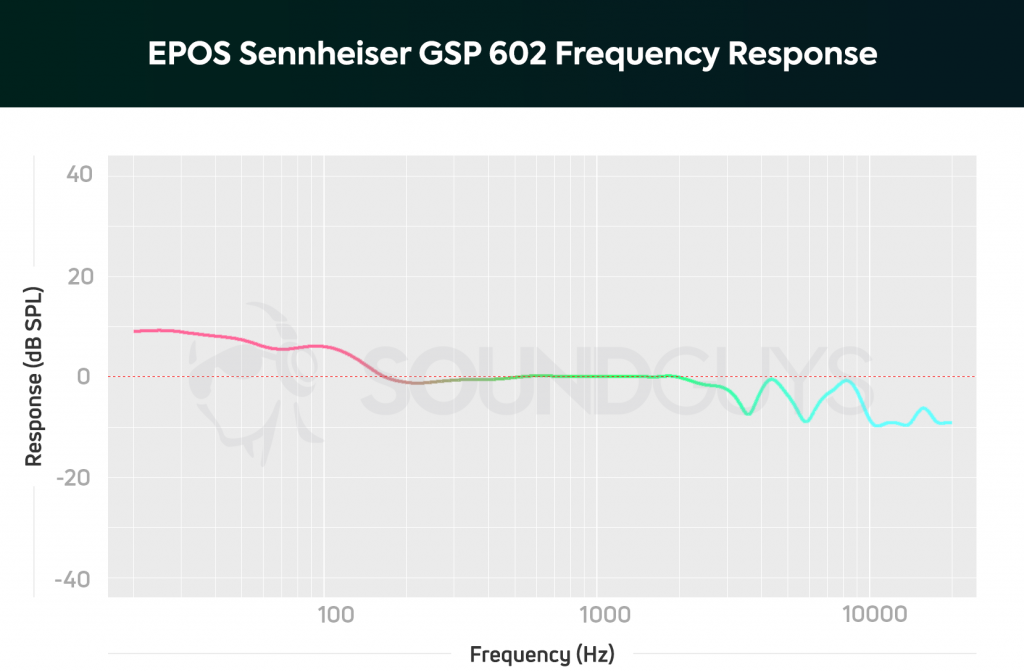 The EPOS Sennheiser GSP 602 sounds pretty standard for a gaming headset. While it offers largely accurate audio output, the headset boosts bass range sound up to around 150 Hz. Over-emphasis like this, of up to 10dB, can make some bass sounds appear up two twice as loud as the rest of your music, but this is pretty standard. Many people enjoy this type of response, and we have a feeling you will too. If not, you can always use an equalizer to adjust it to your liking, as the relatively even response makes the task an easy one.

In music, a lot of this is added emphasis is a non-issue, because sounds that deep don’t crop up all that often. Genres like EDM, where really prominent bass tracks are often desirable, will sound great on the EPOS Sennheiser GSP 602, but other songs may sound a little distorted. In the classic Heart track Kick it out, the bass guitar comes through far more prominently than it should, and consistently pulls focus from the vocals during the chorus and the lead guitar during Nancy Wilson’s solo.

In game, a frequency response like this means you may have a little more trouble hearing subtler sounds amid the rumble of explosions and gunfire than you otherwise would. If you’re playing less action-packed games, you’ll enjoy the fact that the ambient music will sound better than you might be used to—an excellent perk for RPG, RTS, and FPS fans. 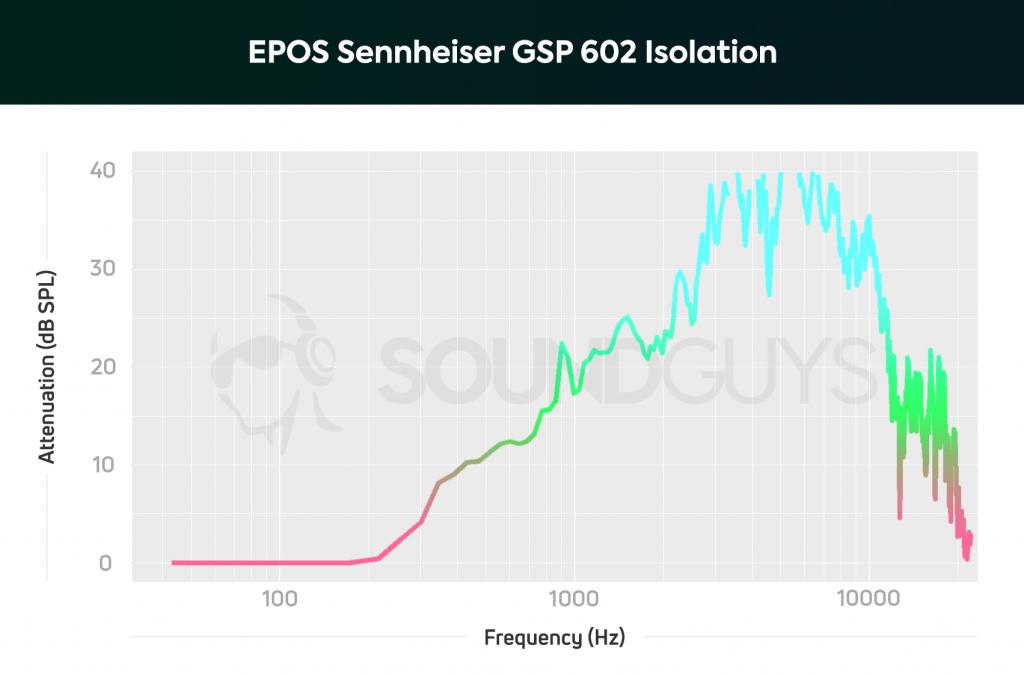 There’s really nothing quite like a good seal and thick ear pads.

No gaming headset on the market has better isolation than the EPOS Sennheiser GSP 602 (currently, anyway). The relative tightness of the headband, coupled with the size and thickness of the ear pads make for a very impressive amount of attenuation in the high and mid range.

However, given that the headset’s clamping force is a big part of that, it’s important to say this will probably get pretty uncomfortable for people wearing glasses, to say nothing of the potential isolation loss. If you’re not someone of the bespectacled persuasion, this will keep the noises of the home at bay with ease. 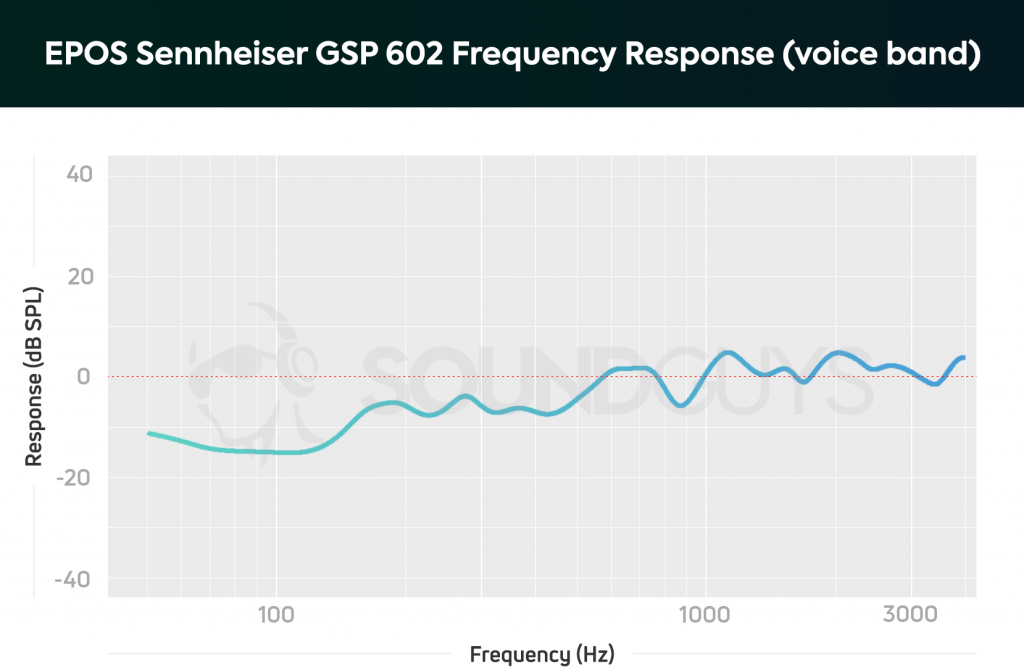 Just like the audio output, this is a pretty standard microphone for a gaming headset.

The EPOS Sennheiser GSP 602 has a pretty unremarkable microphone, all things considered. There aren’t any clarity issues, and it’s easy to use, but it’s about as accurate as the average gaming headset. There’s a notable de-emphasis in the bass and mid range up to around 500 Hz, which means people with deeper voices will come through quieter overall than they otherwise would. If you aren’t Barry White, don’t worry: you’ll sound just fine. The low-end de-emphasis is probably meant to combat something called the proximity effect, which can make your audio sound worse than it should.

Have a listen for yourself:

Should you buy the EPOS Sennheiser GSP 602?

If you don’t have glasses and you need something straightforward, the EPOS Sennheiser GSP 602 is a great option, if a pretty expensive one.

This is a sturdy headset with decent performance, but you should get more than that for this much money.

At over $200 USD, you should probably aim a little higher as far as features are concerned. The performance is exemplary, but then again, so are most headsets at this price point. The gaming headset market is really competitive these days, and there is an absolute glut of excellent options, many of which are fully half the price of the GSP 602.

Wired headsets like the Razer Blackshark V2 and HyperX Cloud Alpha S offer a lot more features for far less money. If you really want something more basic, the GSP 300 offers comparable performance at a similar discount—the only difference big difference being that the cheaper headset has a 3.5mm dongle instead of swappable cords.

The gaming headset market used to be a place full of also-ran headphones with poor mics slapped on them. That isn’t the case any more—just in time for everyone to be working from home for the foreseeable future. There are a lot cheap, excellent options, which makes an expensive-but-good one a little tougher to justify.