Though the Sonos One is currently limited to only Alexa, thats sure to change with future updates promising Airplay and Google Assistant compatibility. For now it's an annoying hurdle but once it gets fixed, this could be the speaker to beat. 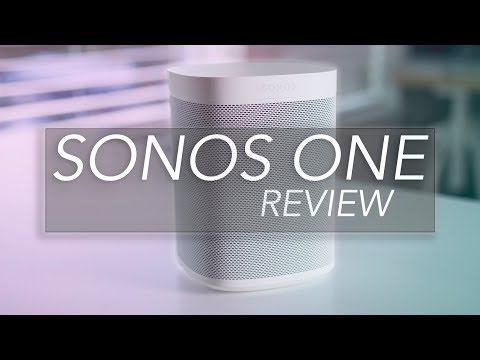 Smart speakers are the latest craze, and it’s only just begun. There’s a whole new battle going on that you may or may not have realized you’re already a part of: smart assistants. What began as a cool new feature on your phone is quickly blossoming into an entire new ecosystem of products. And if you don’t pay attention, you might end up dividing your life in annoying ways. One company that doesn’t want you to choose is Sonos. Whichever assistant you end up letting ruin run your life, your Sonos will work with it; starting with the new Sonos One speaker that has Alexa built in (Airplay and Google Assistant coming in 2018). Hot take: if you want all-in-one smart speaker that sounds good, there are currently no other options. 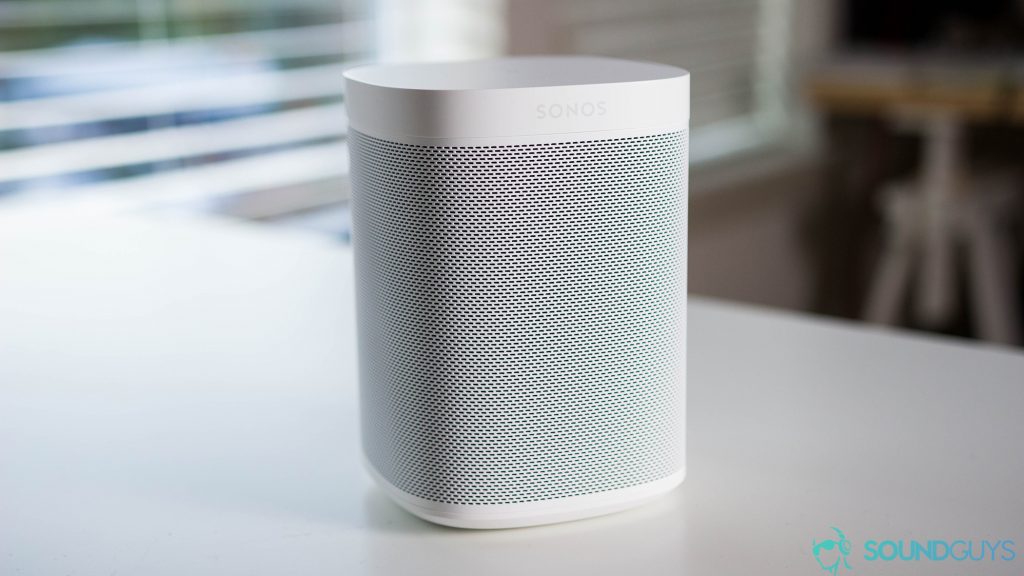 Sonos One in matte white

If the Sonos One looks familiar to you that’s because it has the same design as the Play:1 speaker. That said, it’s been tweaked to add new microphones needed to pick up voices accurately, but the sound has remained the same. So if you have an original Play:1, don’t think you have to upgrade because you’ll get better sound. The speaker is surrounded by a matte white grill (also available in matte black) save for a plastic stripe down along the back which has the ethernet input (if you’d prefer to hardwire it over using WiFi). Up top is where you’ll find all of the touch sensitive controls that allow you to control volume, and turn the microphone off and on—handy if you or someone you know doesn’t want the speaker listening for a hotword for whatever reason. 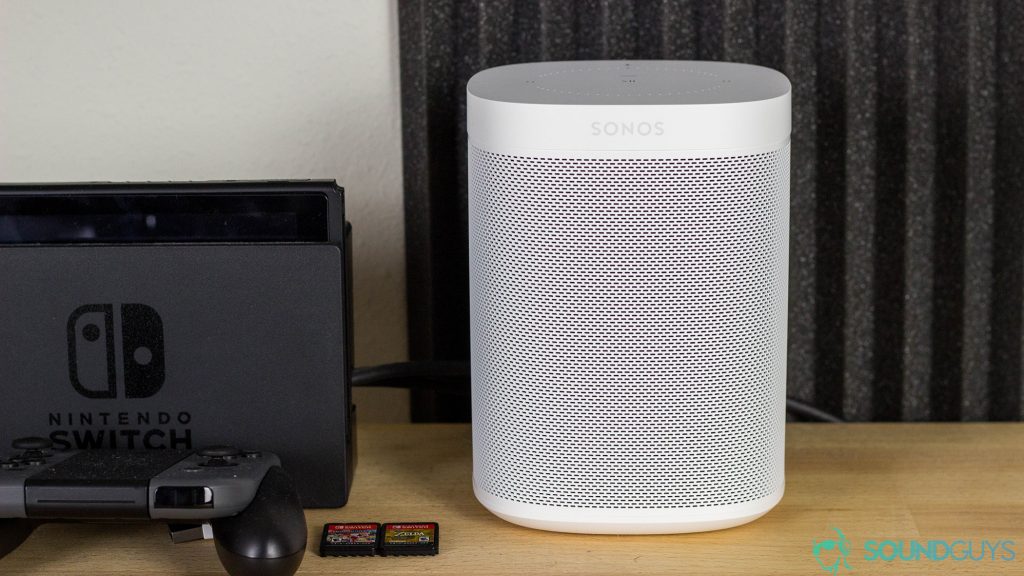 Overall, the plastic finish doesn’t feel cheap and it’s smooth to the touch. Even though this isn’t a waterproof Bluetooth speaker, it’s humidity resistant; so as long as you have a safe power outlet to plug into, you can keep one of these in your bathroom. Because yes, you will have to plug it in. This is a Wi-Fi home speaker—not a portable one. It sticks to the minimal design that most Sonos products have, so whether you keep this on your bookshelf, kitchen counter, or in your bathroom: it blends in perfectly and doesn’t stand out. It’s there to play music for you, and it does it well. But more on that later, first let’s get into the most interesting part of this speaker which is the connection and Alexa features. 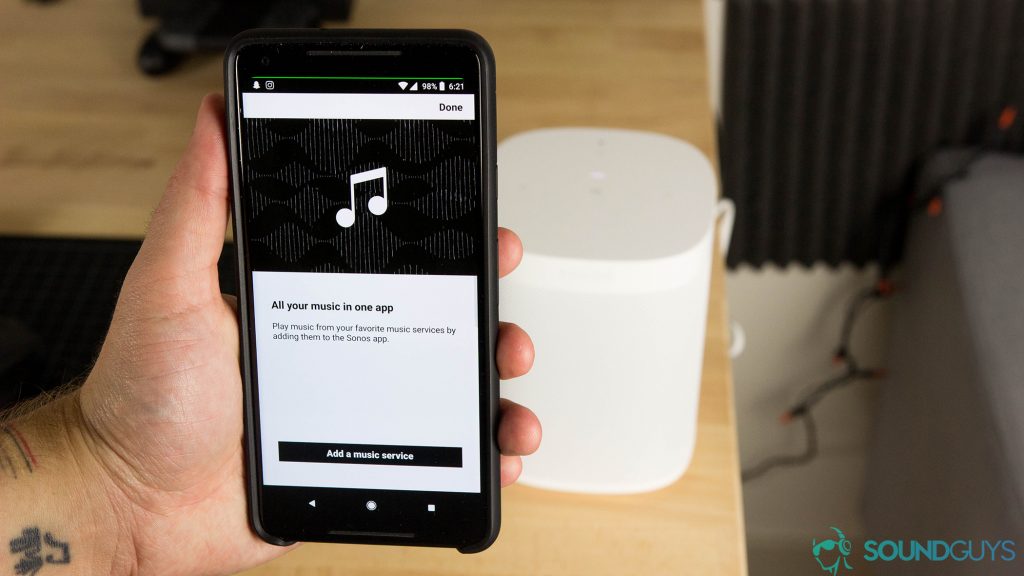 So first things first setup is both super easy, and weirdly convoluted. After plugging it in, the Sonos One automatically found my WiFi, which is a huge improvement to the PlayBASE that we reviewed where I ended up just plugging it in with an ethernet cable to get it to find my router. With very little effort, I was able to select the One on the device controls in Spotify and play music perfectly. But what was a confusing mess of screens, permissions, and apps was the process or connecting . You have to download the Sonos app, which then makes you download the Alexa app, which then needs to be connected, which then needs permissions, etc. You get the point. By the time setup was complete, I honestly couldn’t remember how many screens I had to go through. It’s not necessarily difficult (and I was able to get it all on the first try) but it was definitely confusing. A streamlined process would be a little nicer for the average person.

Now before I go into all of the issues that I had with this speaker in terms of compatible services, I should preface this by saying that most—if not all—of my complaints are promised to be fixed in updates coming either later this year, or early 2018. So if you’re reading this around that time: these might not be issues anymore. The biggest gripe, of course, is that voice controls for Spotify aren’t coming until late in December of 2017, and voice controls for Apple Music haven’t even been announced yet (if they’re ever coming). I don’t feel like I’m any different than most people, and most people use Spotify and Apple Music. Now that’s not to say that it doesn’t support these services, because in the app the interface is super easy to navigate between these apps and many, many more. But you’re going to have to click through the app to control your songs. 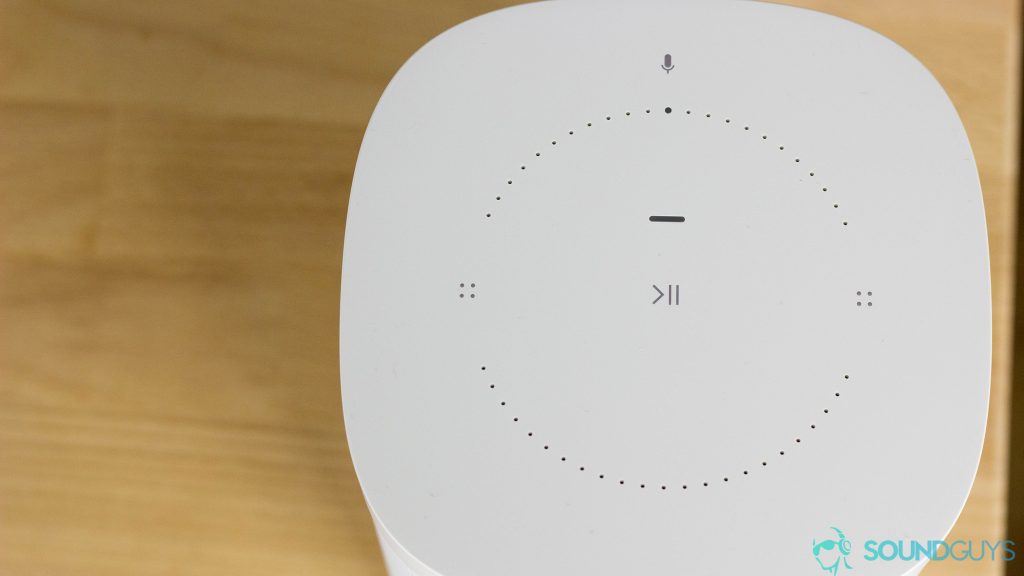 For example, if I play a song via Spotify—it plays through the Sonos One no problem. But if I tell Alexa to skip to the next song, it says:, “I can change the playback mode only when music is playing.” Which is kind of funny, seeing as it has to lower the volume of the music in order to say this and then once it does, promptly returns to playing the music. It also has this problem simply when asking Alexa to pause music. It doesn’t register that anything is playing, so it doesn’t pause. This gets even more annoying when you’re starting from nothing and ask Alexa to play something. Because even though Spotify is connected, it automatically searches the most popular and well-loved music streaming service instead: Amazon Music. And if you don’t have a subscription with them, which I don’t, it’ll tell you that it can start a free trial with you instead.

Again, Sonos says this will be solved by the end of the year by adding Spotify voice integration, so keep an eye out for that just in time for the holidays. Sonos also promises Airplay and Google Assistant functionality in 2018; so if Alexa isn’t your thing you’ll have other options. Thankfully the Sonos app is surprisingly smooth and easy to navigate. Whether or not you use it is up to you, but I’ve been pleasantly surprised by it. Now this is the only Sonos speaker in my apartment, but if you’re already in the Sonos ecosystem then you’ll definitely want to use this app as you can group speakers together and control what plays where. A single Play One is more than enough to resonate through my apartment, but a second one in my bathroom would be golden. Plus the microphones on top do a great job picking up my voice even with music playing at a decently loud level, something that my Google Home struggles with. 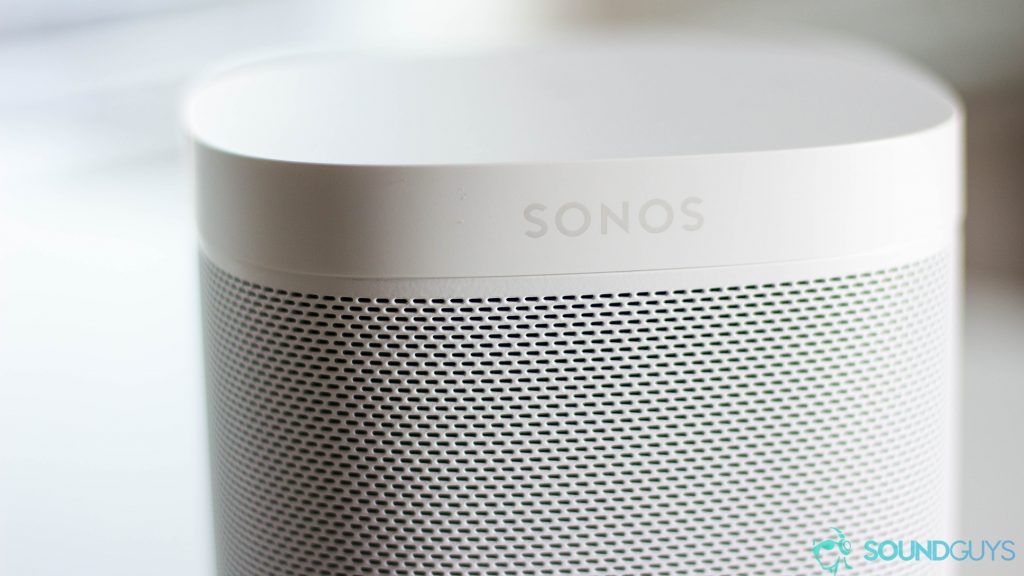 A close-up of the Sonos One

Maybe it’s just that I live in a 1-bedroom apartment, but the One gets loud. Like, keeping it on 50% was more than enough to enjoy music from anywhere, and I was still nervous that I was annoying the neighbors. Now to be honest: I wasn’t thinking that I’d be impressed by the sound quality of the Sonos One. Sure, it’s Sonos, but at the same time the One is their entry level speaker. I was fully expecting the sound to reflect that. I was wrong.

The lows in the speaker get deep thanks to that dedicated woofer, and though it’s definitely a little too much for my taste: it’s not bad at all. Like there’s no muddiness to speak of between the lows and the mids and plus, if you do decide to hook these up with other speakers for surround sound while watching a movie or something those lows will definitely handle those Michael Bay explosions just fine. My favorite part of the speaker was probably the mids, which gave the perfect amount of detail to the rhythm guitar during the intro of “Someday” by The Strokes and didn’t lose any of that when the vocals came in.

Normally when the vocals come in you can hear a slight dip in the quality of the guitar as it dips into the background, but the Sonos One does a nice job handling the transition. If there’s one area of sound that I’m not a fan of it’s how the speaker handles cymbals and hi-hats. It doesn’t do too great of a job at giving you a sense of space, which you can hear by listening to the cymbals throughout the song “Step” by Vampire Weekend which sound really pulled back. 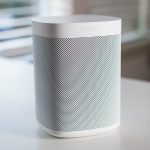 The Sonos One now supports both Amazon Alexa and Google Assistant integration. 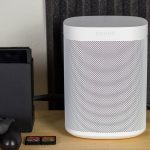 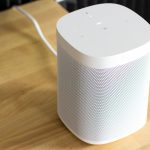 Touch controls on top of the Sonos One let you control your music if voice isn’t supported. 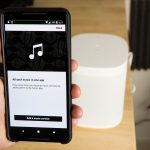 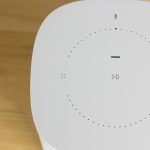 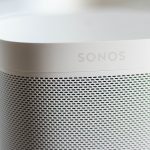 If you want a speaker that sounds good and has a built-in voice assistant: there’s really no other option besides the Sonos One right now. Apple’s Homepod and the Google Home Max are sure to be good options as well, but neither of them is currently available—and they require you to only use one assistant. If you want the flexibility of choosing whatever assistants you want without needing to buy brand new hardware, the Sonos way might speak to you.

Granted it currently only supports Amazon’s Alexa and no word on yet on whether or not it will support Siri, but Google Assistant support is promised early 2018. And that would be my main thesis with the One. The main problems that I had with the speaker like it’s lack of Spotify voice control and only being compatible with Alexa right now, are things that can be fixed via software updates. And not only can they be fixed, but Sonos has already promised the features and has a timetable for their release. And what can’t be changed like the sound quality and the physical design is already great and I had no problems with it. But the main reason I like the One so much is the price.

Don’t get me wrong $200 isn’t really cheap, but considering that some other speakers are just as expensive, don’t sound nearly as good, and don’t have a smart assistants make the Sonos One that much more appealing to me. Whether you’re already neck-deep in the Sonos ecosystem or are making your first Sonos purchase I don’t think you can go wrong with this little guy.