For good sound quality and a comfortable fit, check out Panasonic's new buds.

The Panasonic RZ-S300W is meant for the listener who wants her earbuds to do a little bit of everything. Alexa integration means you can easily respond to incoming messages, check notifications, and more, while the IPX4 rating makes these earbuds ready for almost any workout. That said, these are feature-sparse relative to offerings from Samsung, Google, and even Sony. Sound quality and comfort are the main reasons to buy the RZ-S300W.

Panasonic is no stranger to consumer audio, and it’s hoping to swing big with its RZ line of true wireless earbuds. Listeners who need versatile and unobtrusive earbuds will be charmed by the Panasonic RZ-S300W. These durable earbuds hardly protrude from the ear, and include useful features like quick charging and Amazon Alexa integration. Time to find out if these earbuds warrant the $119 price, or if the noise cancelling RZ-S500W buds are a better value.

Who should get the Panasonic RZ-S300W? Each earbud’s touch panel is encompassed by a silver, notched ring.

The Panasonic RZ-S300W supports mono listening with either earbud.

A charging case is the first impression any user has when using a true wireless headset, and the Panasonic RZ-S300W case is, well, unremarkable. The hinges feel a bit flimsy, and the design looks like the result of a lazy approach to minimalism. It’s outfitted with one USB-C input, two cutouts for the earbuds, and three LED indicators to notify users of the remaining battery life.

The earbuds, while not my style, have a sophisticated look to them thanks to their matte black finish and textured accent ring, which encompasses each touch panel. My favorite thing about the earbuds is how they fit: they’re small and barely protrude from my ear. Some may find it concerning that Panasonic doesn’t provide wing tips, but I never had an earbud fall out by accident while walking or skateboarding. Most listeners should be fine, so long as the small, medium, or large ear tips fit properly.

Each earbud houses a handful of contact points for charging, but they don’t elicit quite the same feeling of discomfort as the larger RZ-S500W. Placing the earbuds back into the case was easy; I never had to be exact about their placement to ensure charging.

These are a feature-light pair of true wireless earbuds.

Operating the controls was a breeze, and I could do everything I wanted without drawing my phone from my pocket. Playback and volume controls are practically a given, and touch-and-hold access to Google Assistant was responsive, too. As with any headset, it takes a few uses to memorize the controls, but they’re easy to internalize.

The Panasonic Audio app is an ugly duckling, but beneath that drab veneer are plenty of useful features worth playing around with: you may select your preferred virtual assistant, equalize the sound or select from two presets, prioritize connection stability or sound quality, and update the firmware. I opened the app plenty of times to play with the EQ settings, and it never crashed; good job, Panasonic. The earbuds stay connected within their designated 10-meter range, whether inside or outside.

Yes, the Panasonic RZ-S300W stayed connected to my smartphone in various environments, in large part due to the independent connection each bud formed with my phone. Not only does this help with consistent connection quality, it also reduces latency and allows for either earbud to be used in mono mode. Bluetooth 5.0 firmware affords a 10-meter wireless range, but the lack of Bluetooth multipoint bummed me out.

Like most earbuds of this price, the Panasonic RZ-S300W only supports one high-quality Bluetooth codec: AAC. This is fine for iPhone users, as AAC plays incredibly well with iOS, but the same can’t be said for its performance across Android devices. Streaming quality is inconsistent, and most of the time Android users are better off forcing SBC for consistent audio quality.

This lack of aptX support is disappointing, but Bluetooth codecs are only part of the equation. Sound quality is highly dependent on the actual hardware and how well the drivers are tuned to reproduce audio. Fortunately, Panasonic spared no resources when it came to creating a fun, clear sound for the RZ-S300W, so it’s easy to forgive the aptX omission. You will, however, notice audio-visual lag when watching TV or movies.

In order to pair the Panasonic RZ-S300W:

According to the manual, pairing with a different headset requires you to remove the earbuds from the case, tap and hold either earbud for seven seconds, and select the RZ-S300W from your desired device’s menu. I wasn’t able to achieve this, so I had to manually unpair the earphones from one device to be able to pair and connect with another. In the grand scheme of things, it’s not a big deal, but seeing how devices like the Samsung Galaxy Buds Plus support Swift Pair for immediate device switching, the Panasonic experience feels cumbersome. Perhaps this will change with a firmware update.

When subjected to a constant 75dB(SPL) output, the Panasonic RZ-S300W earphones lasted 7 hours, 9 minutes on a single charge, and the case provides a supplemental three charge cycles before it has to be topped up via the included USB-C cable. When in a pinch, the headset can quickly charge to supply 1.5 hours of playtime after just 15 minutes in the case. Some may be bummed about the lack of wireless charging, but it didn’t prove inconvenient during my Panasonic RZ-S300W review period. A big problem with true wireless charging cases is that they’re always topping the earbuds up to 100%. Constantly repeating the partial-deplete, full-charge cycle shortens the lifecycle of a given true wireless headset.

Fortunately, we’re at a turning point for true wireless battery software: Apple announced that its AirPods models will soon support battery optimization with the hard release of iOS 14. This enables the headset to learn a user’s charging patterns and hold off on topping the buds off to capacity until needed. In theory, this will extend the life cycle of a given headset. Panasonic made no mention of similar software upon the RZ-S300W release, but we may see it coming down the pike.

How do the Panasonic RZ-S300W sound? The earbuds block out some background noise, but aren’t nearly as effective as the noise cancelling RZ-S500W.

Panasonic uses 6mm dynamic drivers for its base model, which relay a pleasant, familiar sound: bass and treble notes are emphasized to create a more engaging sound. In doing so, listeners may easily perceive low notes (e.g. bumps and oomphs), while retaining some semblance of clarity thanks to the emphasis in the treble range. Don’t fret about the 2-6kHz dip in the frequency response chart; this is intentional. These frequencies can create unpleasant distortions in the human ear canal which are amplified when a seal is made; by intentionally de-emphasizing these notes, listeners sidestep fatigue.

Isolation is pretty good, but not remarkable. Midrange frequencies like nearby conversations are rendered almost half as loud as they’d sound without the earbuds in. Again, this is fine, but low frequencies are unaffected by the earbuds, so if you’re going to use these for travel, I recommend turning your ears toward the excellent Panasonic RZ-S500W.

Mahalia’s song I Wish I Missed My Ex depends on a steady bass beat and chorus to back up Mahalia’s soulful vocals. The bass drops at 0:20, and the slight bass amplification adds a thump to the consistent beat, which makes the song more engaging. The drawback to this is how it makes Mahalia’s lower register difficult to hear. A clear example of this is at 2:03, which is an instrumentally light segment relative to the chorus. As Mahalia sings, “troubling me all over my phone all night,” it’s hard to hear the word “night” because it coincides with a kick drum hit.

This isn’t a huge deal: most people won’t notice this masking unless actively listening for it. However, listeners who keep their ears open for vocal detail and harmonies should take a moment to equalize the bass so it’s less amplified. Tambourine hits sound great with the headset though, especially during the choruses: the tambourine jingles are clearly rendered thanks to the treble emphasis, but aren’t so loud that they’re distracting.

Can I use the Panasonic RZ-S300W for phone calls? 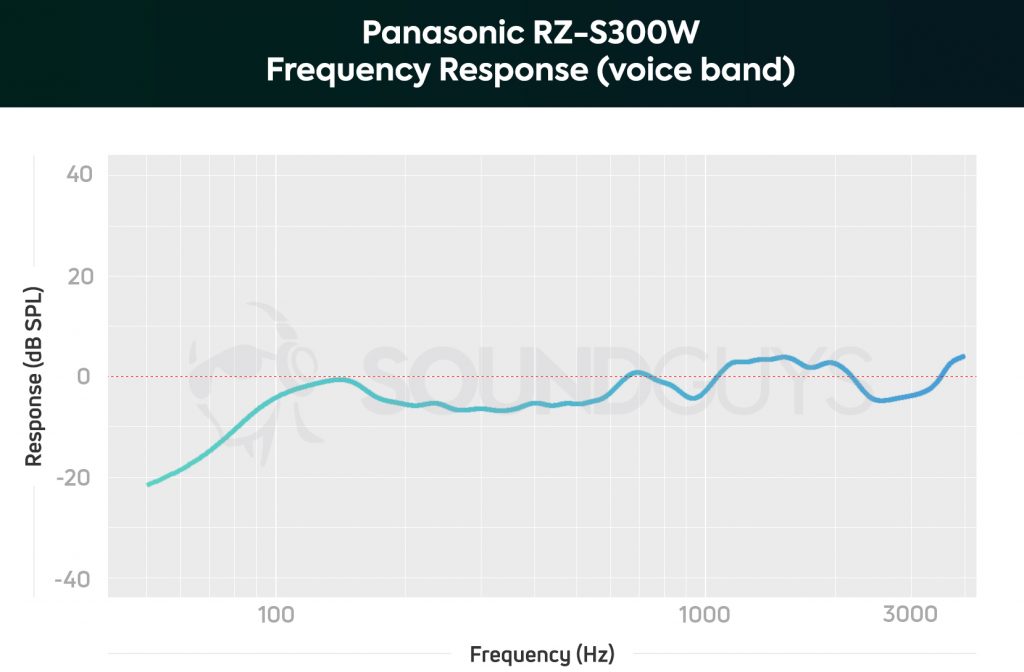 The microphone system isn’t as advanced as the Panasonic RZ-S500W, and the proximity effect is present during calls.

Much like other embedded microphone systems, the Panasonic RZ-S300W is just okay. My voice sounds unclear, which is a consequence of the proximity effect—when a speaker is talking too close to the microphone, resulting in distorted audio. More advanced systems mitigate this by applying a high-pass filter to its systems. Again, it’s not terrible, but the cheaper Anker SoundCore Liberty Air 2 sounds much better than these Panasonic buds. The Panasonic RZ-S300W and Panasonic RZ-S500W are very similar true wireless earbuds, but the latter includes noise cancelling technology. Listeners who want some of the best noise cancelling earphones on the market should throw down a bit more for the premium RZ-S500W earbuds: they use Panasonic’s hybrid ANC to cycle through 50 levels of intensity according to your environment. I was dubious of the technology, but found it so effective I had to decrease the noise cancelling strength in the Panasonic Audio app because it was disorienting.

Each headset has a slightly different sound signature. Listeners who prefer a greater sub-bass presence should get the RZ-S500W model, while the RZ-S300W is tuned like more traditional consumer headsets with the bass notes being more emphasized than the sub-bass notes. What’s more, the microphone systems also differ from one another—the RZ-S500W is much better at recording and transmitting accurate, echo-free audio.

Get the RZ-S500W for remarkable noise cancelling and an experience similar to that afforded by the RZ-S300W.

Both Panasonic earphones use Bluetooth 5.0 firmware and support just AAC for high-quality wireless streaming. Alexa integration is supported in this line of headsets, too. If you travel or commute regularly, the RZ-S500W are a better choice; otherwise, save some money and enjoy a longer play time with the Panasonic RZ-S300W.

Should you buy the Panasonic RZ-S300W? Each earbud houses an LED indicator, which is easy to miss unless you’re paying close attention.

Yes, the Panasonic RZ-S300W is a great headset for listeners who are willing to pay a bit more for sound quality and comfort. There are certainly cheaper true wireless alternatives with more features and better codec support, but most lack the audio engineering finesse heard here. Whether you’re a die-hard Panasonic fan or just looking to upgrade your JLab earbuds, the RZ-S300W is a great buy.