Middle-of-the-pack true wireless earbuds with a monster of a charging case.

At first glance, the Jam Live True seems like an fantastic package: the IPX4 water-resistant, cloth-wrapped earbuds are unique and the dual-purpose charging case is functional and useful when in a pinch. If you prioritize battery life over sound quality and a secure fit, then this is a great choice, but for just a bit more money, you can get a pair of true wireless earbuds that sound significantly better.

Keeping up with the latest and greatest true wireless earbuds is tiring, but the Jam Live True tries to standout with its fabric wrap design and dual-purpose charging case that provides an extra 15 cycles to the earbuds’ standalone battery life. With the rise in cheaper true wireless earbuds though, the $100 market is becoming rather saturated, making it harder for products like the Jam Live True to stand out from the crowd.

Who is the Jam Live True for? 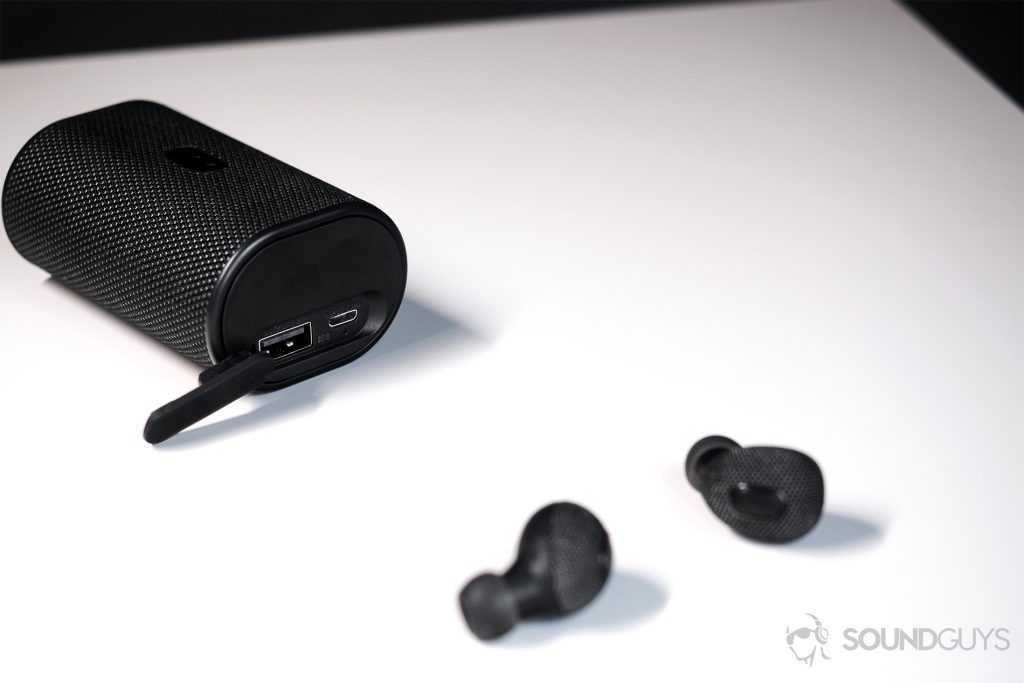 The IPX4 earbuds are small and easy to grip.

How is the Jam Live True built? 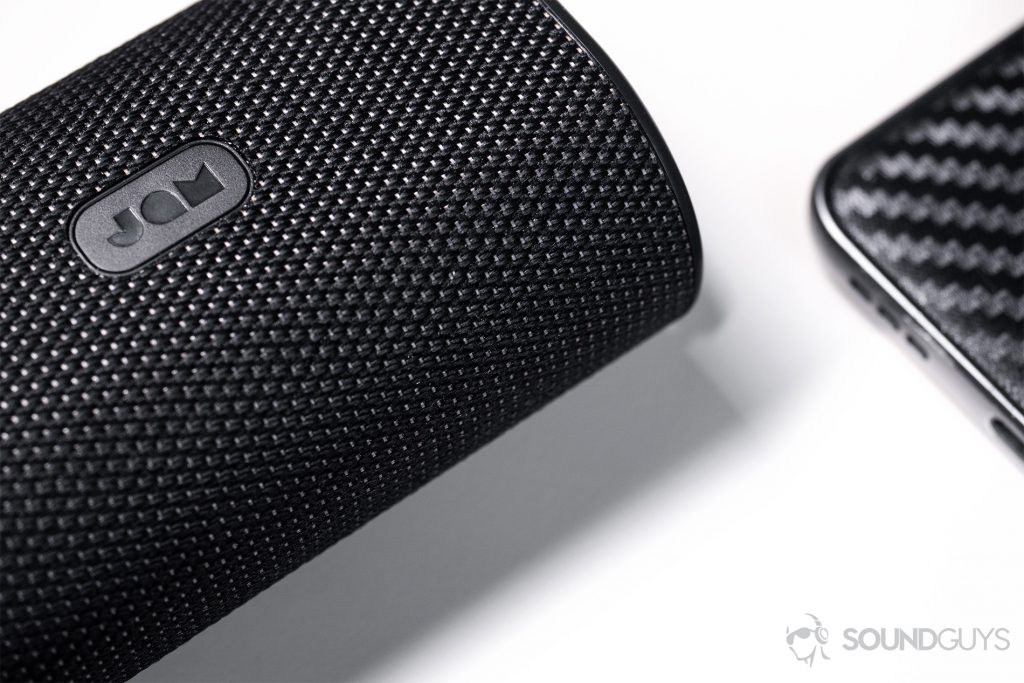 Much like the previously reviewed Jam Ultra True, the Live True case and earbuds are enveloped by a textured fabric that makes it easier to grip. While it’s a functional design, it’s not necessarily the most striking or appealing and is reminiscent of the JBL Flip line of waterproof speakers.

Both earbuds house inlaid buttons, which offer minimal functionality. Listeners can’t skip tracks or adjust volume via the earpieces; they can, however, play and pause music and answer calls. While the earbuds don’t feature integrated Google Assistant support, they are compatible with various virtual assistants.

Playback control is limited as users can only play or pause music and can’t even skip tracks.

The charging case stands as the highlight of Jam Live True as it provides an extra 15 charge cycles. Although in all fairness, you may get less out of it if you end up doubling up on charges and using it for your smartphone as I did. The case’s mechanics are nearly identical to its predecessor seeing as it slides out from the shell and features the same silicone port cover.

Plan on working out? You can do better than these

Isolation and fit aren’t great. The former degrades audio quality since a fair amount of background noise permeates the weak seal, and the latter made me worried about the earbuds plopping out while jogging and working out. Then again, the IPX4 rating does mean you can breathe a sigh of relief if water spills on them.

While the microphone isn’t as bad as that found on the Soul Emotion true wireless earbuds, it’s not great. The presumably omnidirectional polar pattern allows voices to remain audible, but my conversation with a frustrated customer service rep forced me to switch back to my LG G6’s microphone because he kept having a hard time hearing what was being said.

As with all wireless headphones and earbuds, we subjected the Jam Live True earbuds to a consistent 75dB(SPL) output until the battery life depleted. Although the earbuds are given a 3-hour standalone time, we found they lasted 3.56 hours under these conditions, a pleasant surprise seeing as many true wireless earbuds fall short of their listed playback times. 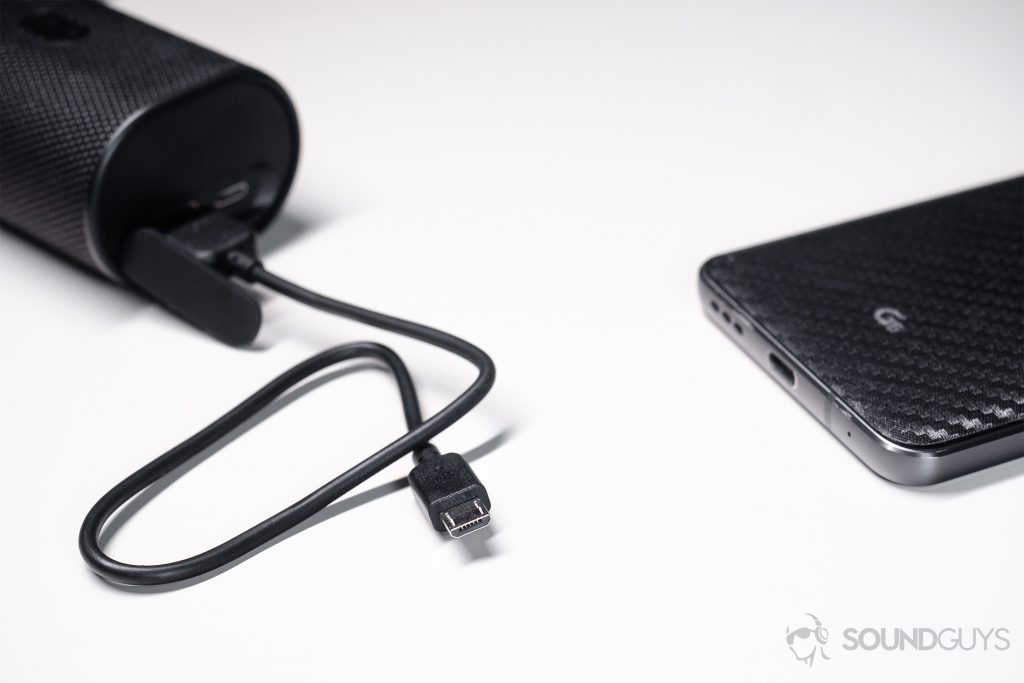 Listeners can charge their phones on the go with the included charging case.

These operate via Bluetooth 4.1, which seems a bit archaic in an age where more and more devices come with Bluetooth 5.0 support to boot. The firmware’s age shows, too; just as Adam struggled with connectivity on the Jam Ultra True, the Jam Live True have the same follies. Autoconnect is finicky at best and connection stability is dubious even in low-traffic areas like my 900-squarefoot apartment. The Jam Live True earbuds don’t even try to stay remotely neutral as they replicate a massively exaggerated low-end. Isolation isn’t great as many low rumbles and surrounding voices will mask the sound of your music.

To be frank, they don’t sound twice as good as the JLab JBuds Air or even the Monoprice True Wireless. They can, however, get loud. Whereas I typically listen to earbuds around 50 percent of my phone’s volume, I kept these down to 25-30 percent during regular listening.

The frequency response chart reviews the altered, bass and mid-centric sound signature, which is audible to an untrained ear. The bass emphasis was useful in the gym, but for casual listening, there are better and cheaper alternatives. Maintaining a secure fit with the earbuds is a challenge, especially since the Jam Live True doesn’t include any sort of wing tips.

The bass guitar in Fleetwood Mac’s song Rhiannon is loud, even compared to the drum hits, but clarity is severely lacking. The song sounds like it’s missing a lot of its character and charm, especially as it pertains to the resonance of Stevie Nicks’ vocals. Unfortunately, the harmonic resonance of her raspy vibrato as she sings the word “life” at 1:00, is completely masked by the drums and keyboard.

Highs are reproduced with even less emphasis and clarity as demonstrated by the song Little Shadow by the Yeah Yeah Yeahs. Hi-hats are a constant throughout the song, and what should sound like a powerful, defined crash of drumstick to cymbal is relayed as an underwhelming cymbal hit. On the flipside, the harmonic frequencies that reverberate from the opening guitar picking is surprisingly well-replicated relative to the hi-hats.

Should you buy the Jam Live True? Like the Sony WF-SP700N, listeners need to be deliberate about placing the ‘buds back in the case to ensure charging.

If you’re committed to the Jam brand or are drawn in by the fabric wrap design, yes, these are a fairly affordable pair of true wireless earbuds that are just fine. For just under $100, though, listeners should expect something better than “suitable” or “fine” for their listening purposes, and can easily find comparably priced, better-sounding options out there.

Aside from the increased battery life, it's hard to justify buying this over the Jam Ultra True seeing as they share identical designs.

Perhaps you like the idea of the dual-purpose charging case but don’t like the unreliable fit and generally bunk sound; if that’s the case, then the Rowkin Ascent Charge+ is an excellent pick. It includes a Qi Wireless charging pad, dual-purpose charging case, and touch capacitive earbuds that form a cogent seal for $139. In fact, as of publishing the Ascent Charge+ comes with an extra $20 discount.

Still looking? Read up on our list of the best AirPods alternatives

Jam Live True
6
No wires, no restrictions. With JAM Transit Ultra, you're free to move. Two separate earbuds fit snugly and comfortably into each ear, delivering up to 3 hours of playtime with a single charge. When you're done rocking, pop them back into their charging and carrying case for up to 10 full earbud charges. you'll love that the case doubles as a backup battery for your mobile devices- just plug them into the USB port. Features Bluetooth 4.1 and wireless calling capability. No wires, no restrictions. Separate earbuds fit independently into each ear. The sleek case holds your earbuds and recharges them up to 10 hours. The charging case includes a USB port to charge your mobile devices. Answer (or decline) calls directly from your JAM Ultra earbuds. Store your earbuds in the carrying case, which fits easily into purse or bag. Bluetooth 4.1 The latest Bluetooth technology ensures a strong audio connection.