Discomfort after an hour
Unstable app

The charging case is a double-edged sword; it comes in handy when you need to charge your phone, but it adds a lot of bulk to the true wireless package. For many, it's a compromise worth making as the Rowkin Ascent Charge+ is a feature-packed product with plenty of inclusions.

One of the biggest gripes about true wireless earbuds, aside from looking strange, is their battery life. It seems that we’re lucky to get three hours of standalone battery life from truly wireless options, but the Rowkin Ascent Charge+ earbuds exceed the listed 3.5 hours of playback time by just over half an hour. If you’re looking for one of the most versatile pair of true wireless earbuds, your search ends with the Charge+.

New here? Read about what makes a good set of true wireless earbuds

Who is the Rowkin Ascent Charge+ for? The Rowkin Ascent Charge+ are the smallest sport earbuds available as of the September 19, 2018, launch.

There are plenty of inclusions with your purchase of the Rowkin Ascent Charge+. You get a dual-function charging case that can also charge phones; three pairs of ear tips; a USB-C cable and USB adapter; a Qi Wireless Charger; and the truly wireless earbuds.

How is the Ascent Charge+ built?

The cylindrical earbud housings are ribbed, making the earbuds easier to grip with sweaty fingers. Each earbud features a capacitive touch panel along with an integrated and LED indicator. Learning said touch controls takes all of five minutes, but they could be more intuitive—especially since certain tasks are earbud-specific. 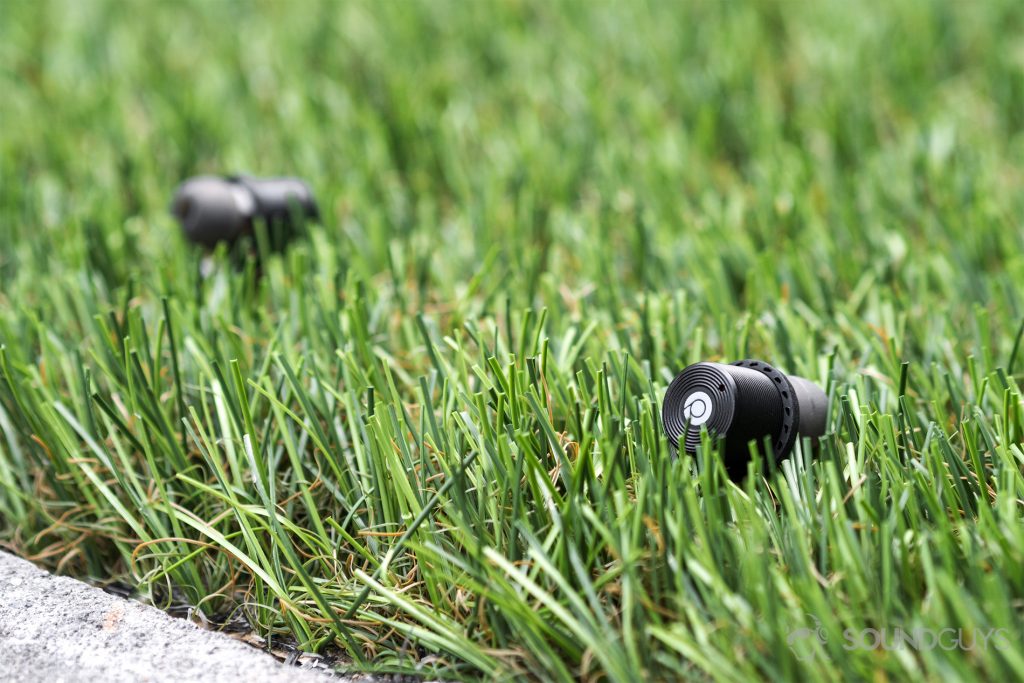 Each earbud features a capacitive touch panel for playback controls and taking calls.

An odd-looking but effective silicone ring grips the seam dividing the nozzle from the housing. Whether you’re weight lifting, running, or biking to the bank, the Ascent Charge+ ‘buds stay in place. However, if you find the material to be irritating—or aren’t one for the outer ring appearance—you can always remove it.

Rowkin angles the nozzles of the Ascent Charge+ earbuds at 45 degrees for an ergonomic fit. This is supposed to make things comfortable for day-long wear. Unfortunately with the rubber ring installed, the fit irritates my ears after an hour of listening. Removing the ring, though, leaves the fit feeling unstable. Instead, I limit my listening to hour-long segments instead. 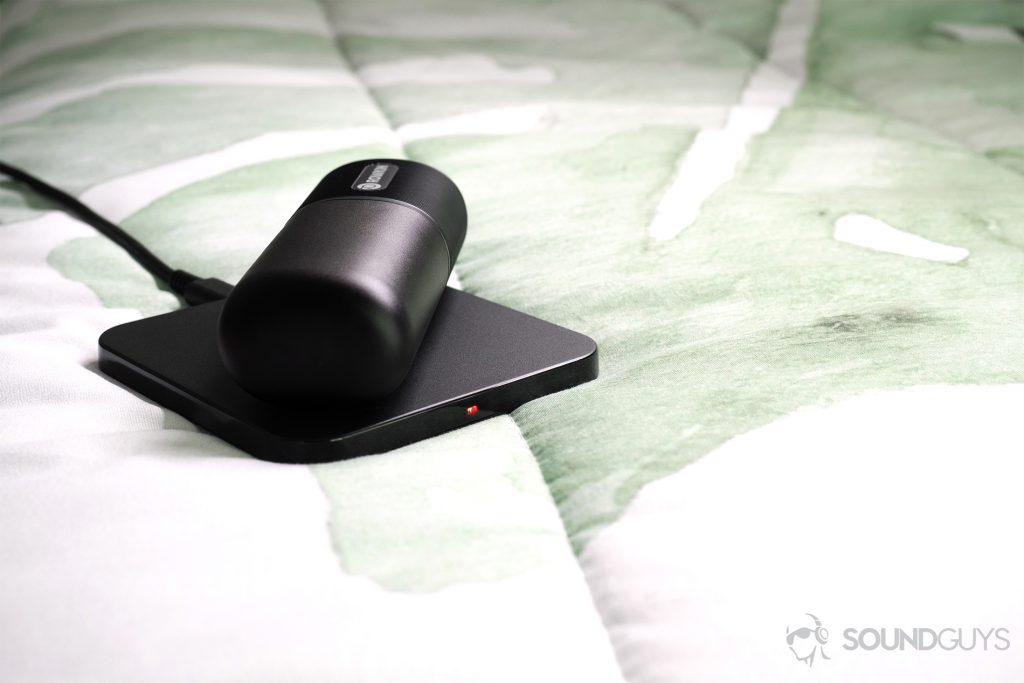 Included with the Rowkin Ascent Charge+ is a Qi Wireless Charger.

Reminiscent of the Bose SoundSport Free case, the Ascent Charge+ case sports a tubular build. Rather than a hinge mechanism, the included case works more like a drawer. Not only does the 1900mAh case charge the earbuds, but it can also charge your phone if it’s USB-C compatible. And if you’ve exhausted every nook and cranny in your book bag, you can hook the case onto the outside via the loop. 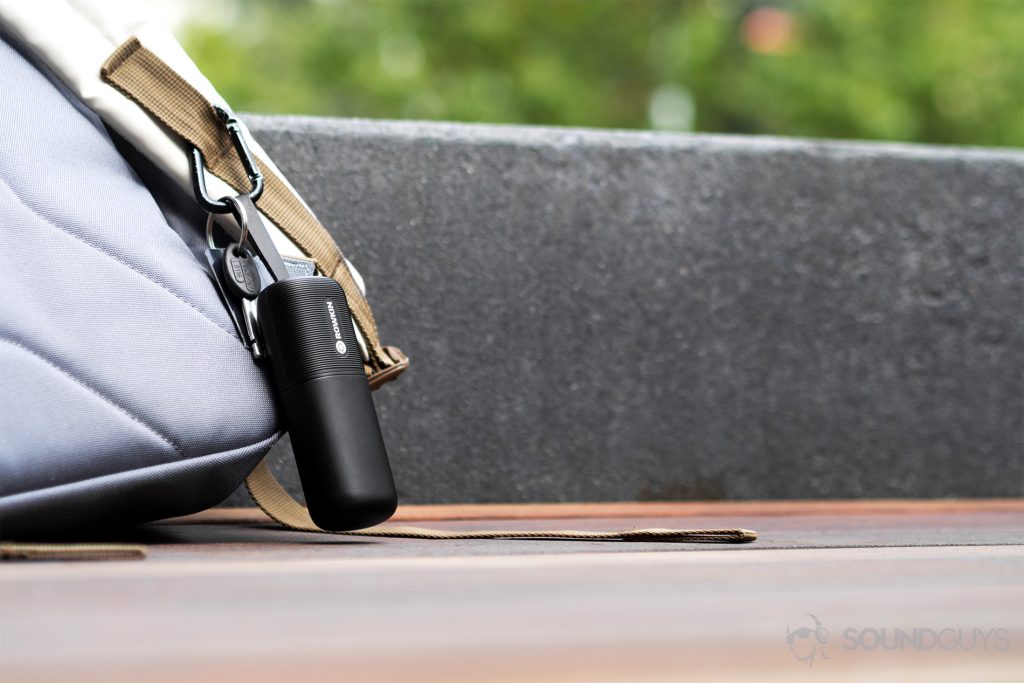 Although the case is large, it’s easy to travel with by attaching it to the outside of a bag.

One of the coolest inclusions of the Rowkin Ascent Charge+ is the Qi Wireless Charger. By setting the case on the charger without fumbling around for the proper cable, you’ll be saved from plenty of headaches. And just like the case, the Qi charging pad can charge compatible mobile devices. For instance, I was able to use it with my LG G6.

These work seamlessly once you get the hang of them. Here’s a cheat sheet from the Rowkin manual to help you study up. 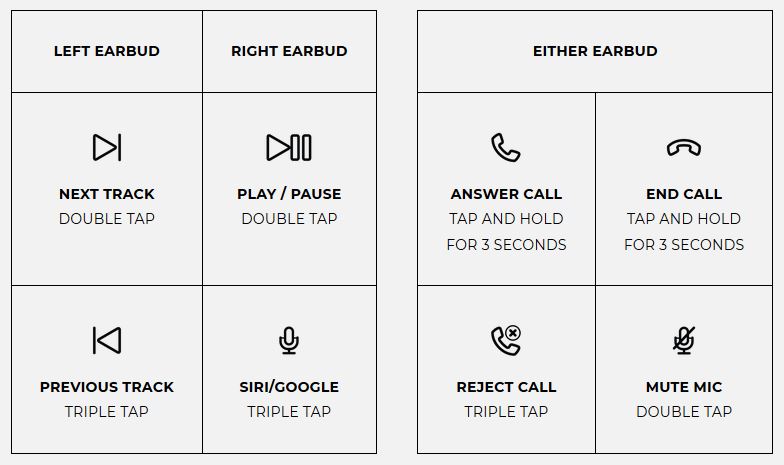 Is the Ascent Charge+ good for working out?

They’re great for indoor cardio junkies because of the stable fit. But if you’re going to be running or cycling outside, we don’t recommend them. They do such a good job at insulating you from the environment that it could be considered a safety hazard. Instead, you’re better off with a safer pair of workout earbuds. Additionally, if you use them for running outside, you may notice that the shape of the earbuds amplifies wind noise.

For indoor activities though, the noise-reduction, fit, and IPX5 water-resistance make these a versatile choice for anyone who likes to exercise with music. 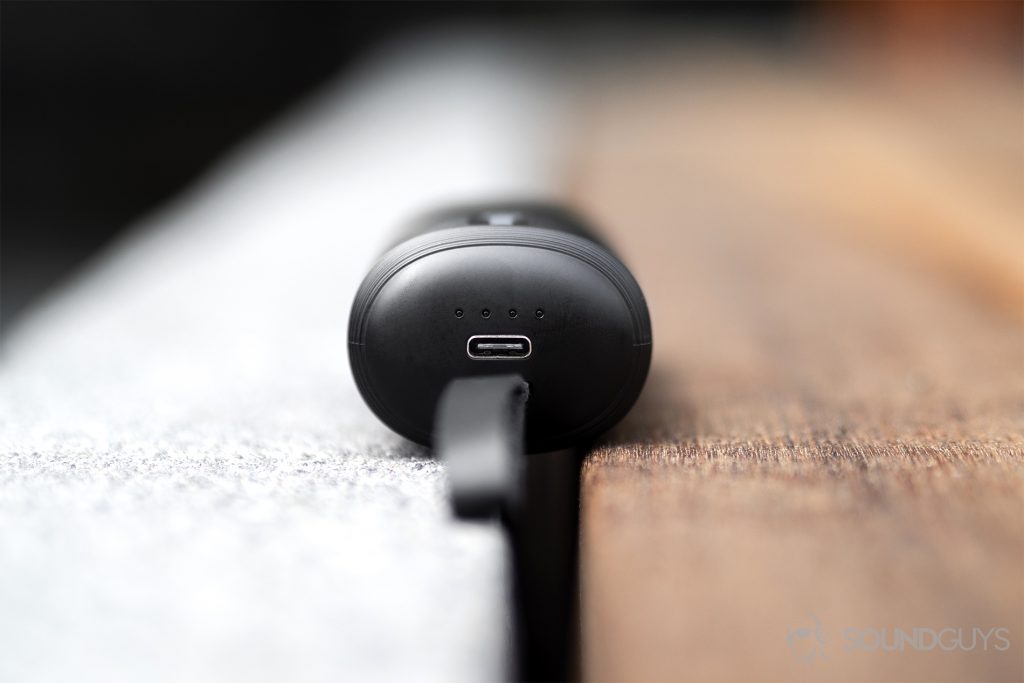 You can charge the case directly via USB-C cable, or place it on the included Qi Wireless Charger.

The battery life of the Charge+ is excellent given that they’re rated to last just 3.5 hours. During our objective testing, we found that a single charge provides 4.13 hours of playback when subjected to a constant output of 75dB(SPL). When you do exhaust the Ascent Charge+ battery life, just plop them into the case. From there they will automatically begin charging.

If the case is also out of juice, you can charge one of two ways. Either connect the USB-C cable directly into the case, or place the case on the Qi Wireless Charger. Completely charging the earbuds takes up to 70 minutes, while doing the same for the case takes about two hours.

Operating via Bluetooth 5.0, means that the Rowkin Ascent Charge+ easily maintain a stable connection. Unfortunately, both my PC and LG G6 are only Bluetooth 4.2 compatible, so I wasn’t able to directly test the 5.0 capabilities. However, I’m able to walk throughout my 900ft2 apartment without connectivity stutters, which is promising. In fact, regardless of what environment I was in, the earbuds managed to maintain a constant connection without dropping. The only situation where it stuttered was when I was on the subway. The Rowkin Ascent Charge+ are a versatile pair of earbuds that perform well with a wide array of music.

If you’re looking for a pair of dynamic driver earbuds with overwhelming bass, you’ll need to keep looking. The frequency response of the Ascent Charge+ is neutral-leaning with a bump in treble frequencies. Due to the noise-reduction enhancements, you don’t need bass emphasis to hear the low-end. Additionally, due to the software and good fit, you’ll be less likely to turn up the volume which will protect your hearing in the long run. 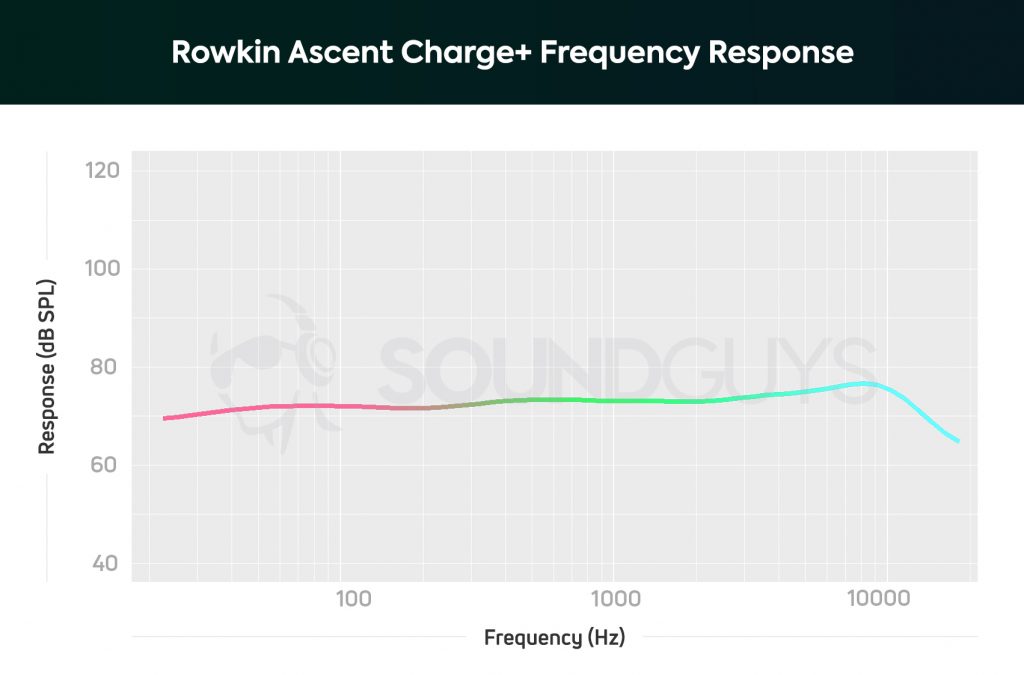 Although the bass isn’t exaggerated, its presence is still apparent. The treble, on the other hand, has a tendency to sound over emphasized and, thus, harsh.

In Sex n’ Drugs by Abhi the Nomad, the intro opens with C#m and F#m. Following these chords, chimes are thrown into the mix, and are clearly heard. Granted, at 0:12, the chimes are the only sound that can be heard. Just 12 seconds later, the bass drops and Abhi’s voice remains audible even with the bassline.

Even though, the frequency chart may make some listeners dubious of the low-end response, its presence is significant. I happen to prefer this type of response as it allows you to hear the accompanying instruments in tandem with the beat.

Treble frequency emphasis is obvious within the first 40 seconds of Sex n’ Drugs. At 0:35, the first hi-hat is hit, and its harmonic resonance is overemphasized and caused me to decrease the volume from 75 percent to just over 50 percent. Although this is fatiguing, the spike around 8.5kHz explains the harsh response. This can be mitigated by playing around in the Rowkin app and adjusting the EQ settings.

Should you buy the Rowkin Ascent Charge+?

Yes, this includes an excellent pair of earbuds that are easy to set apart from the crowd. Not only are they claimed to be the smallest sport earbuds, as read by the packaging, but the battery life is superb, and the dual-purpose charging case is handy. Additionally, the inclusion of the Qi Wireless Charger is a nice touch. 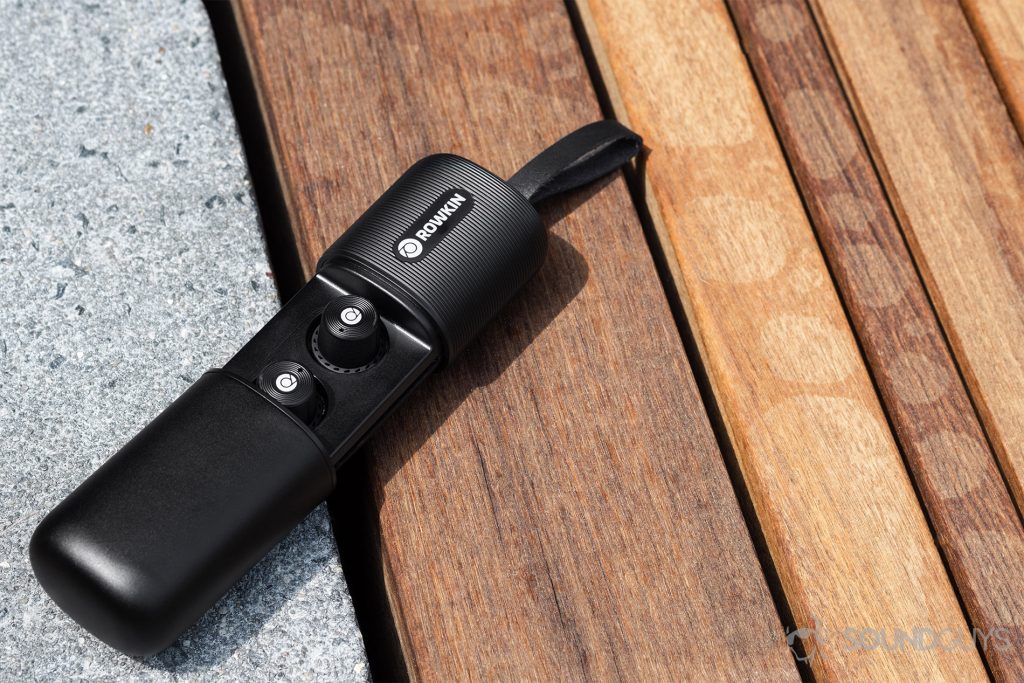 The IPX5 Rowkin Ascent Charge+ are a powerhouse set of true wireless earbuds.

Of course, the Rowkin Ascent Charge+ isn’t without its imperfections. If you have small ears, it’s not worth trying to justify the pain. Although, if you don’t mind feeling like they may eject at a moment’s notice, you can always remove the ring. What’s more, if you listen to treble-heavy music, these may not be for you as the sibilant treble frequencies were hard to endure beyond 15 minutes. With those being the two biggest faults of the Charge+, however, it’s safe to say that these are an excellent pair of truly wireless earbuds.

Rowkin Ascent Charge+
7.8
Contrary to other brands that attempt to fit the entire ear, Rowkin has created an earbud that fits comfortably in the ear, and stays put during active adventure activities. The removable rubber wheel allows for easy retention without the bulk. Appearing like small dots in your ears, your wireless headphones will be almost invisible. With zero wires or cords, it’s easy to store and use. These Bluetooth earphones are technologically-packed for their extreme small size.