These were once great but now you shouldn't bother.

If you're not a fan of wires while exercising, these are great. But if you're also looking to use them for casual listening there are better sounding ways to spend a few hundred bucks. 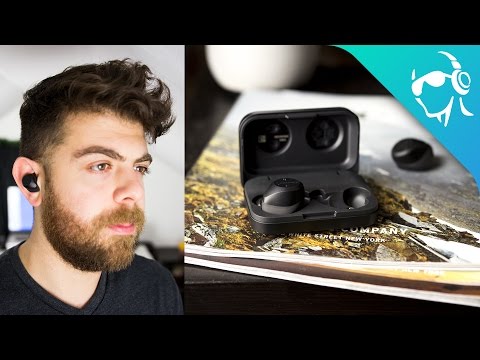 This may seem weird but there was a time when AirPods weren’t as common as they are now. At the time that these came out, if you wanted true wireless earbuds you didn’t have many options. While most buds at that time were average at best, the Jabra Elite Sport excelled. Now that some time has passed and everyone is pretty familiar with the new product category, how do those original earbuds hold up? Let’s find out.

Editor’s note: this Jabra Elite Sport review was updated on June 8, 2021, to include the Sony WF-1000XM4, JLab GO Air, and Anker Soundcore Spirit Dot 2 to the alternatives section.

Who should get the Jabra Elite Sport?

What’s it like to use the Jabra Elite Sport?

The Jabra Elite Sport comes with a nice charging case that keeps them in place while they’re not in use.

Just by looking at them, the Jabra Elite Sports are what I envision when I think of my perfect pair of true wireless buds, just a little slimmer. All black, minimal earbuds that you can discreetly pop in and out of your ear throughout the day. Before you can do that, you will need to find the right combination of wingtips and ear tips. I found that just the largest pair of memory foam tips with no ear wings worked perfectly for me, but your mileage may vary. Once I figured it out, I had no problem keeping these in my ear whether I was running or commuting on the train. Unfortunately, these are still kind of large and will probably jut out of your ears. That’s just a side effect of the technology from that time though, and it’s true that newer models are slimmer but not by much.

The Jabra Elite Sport earbuds have tiny playback controls on the outside of each earbud.

On the bright side, these are made for exercise. They’re IP67 certified which gives them protection against sweat, and they have a built heart rate sensor along with a very health-centered app (more on that later). It’s good that these don’t fall out but unfortunately, they do get a little uncomfortable after about an hour of listening. I wouldn’t call it painful but you’ll be aware of the placement in your ear, which is also kind of good since you probably don’t want to lose one. Speaking of which, the charging case has a little bit of a pop to it when you’re opening it and the first time opening up the case I almost lost an earbud. It popped open and sent the right earbud flying under my seat. Just a fair warning so you don’t go opening the case near a sewer or something.

Related: What makes a good pair of in-ears?

When you open the box you’ll get a charging case, the headphones, three sets of silicone ear tips, and three sets of memory foam ear tips, two sized wingtips, a micro USB cable to charge the case, and a small box with the quick start guide and warranty information inside.

Be careful when opening the charging case as there’s a bit of a pop to them that can send an earbud flying if you’re not careful.

This is the part of the review where the “true wireless” part of these earbuds gets put to the test. The audio signal has to get sent from the source device to the master earbud, then from there, it gets relayed over to the other earbud, and then has to playback with no delays and skips. In three days of constant testing, I’ve only had two or three quick stutters during playback. Otherwise, these played back perfectly.

The left earbud gave out once, but that was it.

The only major issue I had was once on the second day when the left earbud just gave out for some reason and I had to put them back in the case and let them reset. Since then I’ve been on the lookout for it to happen again, but it hasn’t. Pretty impressive considering all of the features these have packed into them. One of my favorite features has to be Passthrough, which uses the microphones in the earbuds to let you hear what’s going on around you. This is useful for when you need to be aware of your surroundings, or just want to talk to someone quickly without removing the buds entirely. The new AirPods Pro do this too, but the Jabra Elite Sport was one of the first true wireless earbuds to do this effectively.

On the left earbud is the volume up and down buttons, which also let you skip between tracks if you hold them down. The right earbud has the play/pause/power button which also answers phone calls if tapped and activates the heart-rate sensor if you hold it down. The top button lets you open up the Jabra Sport app if you tap it, or start a workout by holding it down. The app itself isn’t as user-friendly as my main fitness app, but it does provide way more information especially when paired with the heart rate sensor in the earbud. You can get training from a voice coach right in your ear and it’ll rate your workout depending on how hard it was for which can be both rewarding and shameful, depending on your workout. There’s also an option to “find my headphones” which will cause them to emit a high pitched sound so you can easily locate them as long as they are within range.

How’s the battery life of the Jabra Elite Sport?

Like most true wireless earbuds, the battery life on these isn’t great at only about three hours. But they do come with a charging case that lets you recharge it two more times for a total of nine hours of listening times. The Jabra Elite Sport show their age when it comes to battery life. Three hours is fine for most workouts, but is nowhere near what is needed for average use throughout the day. Now the average that we see in true wireless earbuds is closer to five or six hours. True, that still isn’t great, but it’s almost double what these will offer.

If you don’t have the time to let them charge completely they also have a quick charge feature which will give you an hour of listening time in only 15 minutes of charging. Just enough time for a decent run or workout.

How do the Jabra Elite Sport earbuds sound?

I wasn’t expecting these to sound amazing and they don’t, but I was surprised at how good these sound. Soundstage obviously isn’t too amazing but as far as quality goes they don’t sound that much worse than other regular fitness buds that were released at that time. Since the release of these, there have been a number of true wireless earbuds focused on good sound but these still aren’t bad for exercise.

The Jabra Elite Sport have a quick-charging feature, so just a few minutes in the case will give you an extra boost.

I usually expect a higher emphasis on the bass in workout earbuds and the Elite Sport didn’t let me down. If you’re looking for that extra push to your music to help push you past the pain of workout, these won’t disappoint. That said, the fact that these are already so close to your ears means that songs tend to sound too bass heavy as the lows really push through their limits. The rhythmic bass of Feel It Coming by The Weeknd made its way nicely throughout the song but it, along with the steady bass kick almost feel like the main part of the song.

Overall the mids kind of battled with the low end and resulted in some masking of the lower notes. This was really present in Redbone by Childish Gambino where I’m more used to the vocals being more forward sounding, floating over the top of the instrumental which wasn’t the case here. The low end definitely had more of a say than the rest of the frequencies.

The Elite Sport earphones amplify bass notes, but not to an uncomfortable degree.

Highs were pulled back plenty which is great if you’re not a fan of harshness, but it does take away from detail in cymbals and hi-hats. Overall, it sounds like Jabra played it safe and took off a little more than was necessary to avoid any painful sounds and I agree with the decision since these are sitting right in my ear, but the choice is kind of noticeable, and cymbals, tambourines, and hi-hats are just barely there.

So should you buy the Jabra Elite Sport?

You should definitely avoid buying these right now. When the Jabra Elite Sport true wireless was first released, they were some of the best true wireless earbuds you can get. Now, they’re just average. The sound quality is average, the ease of use is average, the battery life is below average, and while the heart-rate sensor is still cool, it’s no longer the must-have feature it once was. If you can find them on sale, you can still make good use of these in the gym, but as of right now these will run you around $219 USD which is simply ridiculous. There are plenty of better true wireless options available now and while the Jabra Elite Sport is still a solid pair of buds, you should probably skip them unless you can find them for way cheaper.

The IP57 rating means the Elite Active 75t are resistant to dust and water.

The Jabra Elite Active 75t lacks the Elite Sport’s heart rate sensor but features an IP57 build and a more compact design. Originally, these earphones relied only on passive isolation, but Jabra added noise cancelling to its Elite 75t series headsets with a significant software update. If you don’t need heart rate monitoring, the Elite Active 75t are a much better option, with better battery life, more modern design, and more comfortable button controls. If you want a pair of durable, top-tier true wireless noise cancelling earphones, save up for the Jabra Elite 85t instead.

What about the Apple AirPods Pro?

The Apple AirPods Pro have indentations to indicate where the touch controls are located.

Since the release of the Jabra Elite Sport, the true wireless market has exploded. Now there’s better tech, better sound, and even lower prices in some cases. Starting with the better tech, there are options like the AirPods Pro and Sony WF-1000XM4 true wireless earbuds. Both of which have the transparency mode of these, but with the added benefit of some seriously impressive active noise cancelling. Everyone is familiar at this point with how well AirPods are suited for iOS users, but if you’re an Android user then you might want to check out the Google Pixel Buds (2020) which offer a similar experience. Alternatively, Samsung Galaxy smartphone owners should consider the Samsung Galaxy Buds Pro, which are IPX7-rated.

Those options are going to cost you, though. If you want to keep it under $100, there are still some pretty great products to choose from like JLab GO Air and Anker Soundcore Spirit Dot 2.

What's the benefit of earbuds with a heart rate monitor?