How listening to music improves your workout

Your favorite song may not make you go from couch to 5K, but it can improve your mood during workouts.

Go to a gym and let your eyes mosey about. You likely see a bunch of AirPods. Broadly speaking, you probably see more earbuds than patrons. It seems we’ve come to a widespread consensus that music makes working out more enjoyable, but why? Many of us have experienced this: you’re jogging through an otherwise dilapidated stretch of pavement and struggle to stay in the zone. Perhaps the city’s “groutfit” has you feeling uninspired. Then, your favorite song—Taylor Swift’s Welcome to New York, of course—begins and your legs pump a little harder, finding a rhythm between labored breaths.

This isn’t just an anecdotal phenomenon. A study accessible through the National Center for Biotechnology Information put subjects through the rigors of fitness machine exercise while listening to electronic/dance music. The 52 participants were divided into two groups: passive listening and musical agency. The latter was subjected to music which gave feedback of their movements. Simply put, members of this group could make music with the various exercise machines. The musical loops were designed to synchronize at 130bpm.

When engaged with the music, subjects performing an array of exercises showed a greater increase in mood, calmness, and alertness.

The data collected indicate those in the musical agency group benefited from the more engaging experience. Participants showed a greater increase in mood, calmness, and alertness relative to the passive listening group. Not only did these positive facets increase, but the musical agency group also noted decreased levels of anxiety. Granted, passively listening to music decreases anxiety, too, relative to baseline levels (pre-workout, no music). A kindred study supports this and posits that exposure to music during physical activity increases post-activity pain tolerance and positive mood.

In layman’s terms: you don’t have to produce music with each step or bicep curl to benefit from music’s calming effects. Let’s take the results a step further. You could see how selecting a predetermined song, when you need the motivation, yields results similar to the musical agency group. This shift in focus could alleviate perceived pain and stress, allowing you to perform better.

Keeping pace with the bass 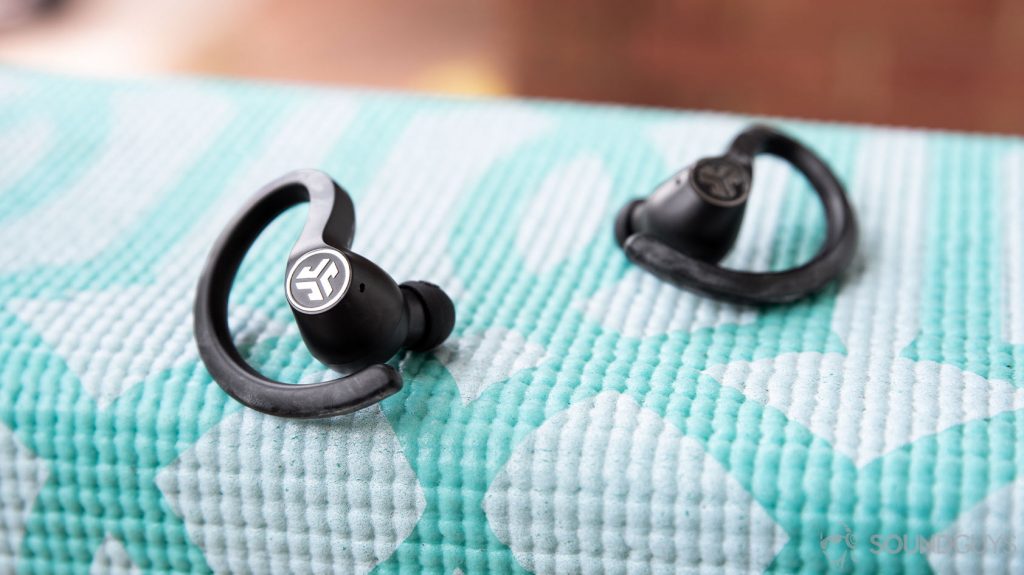 The JLab JBuds Air Sport have a heavy-handed bass response.

In a similar vein, studies heed the importance of tempo. According to one published in the Research Quarterly for Exercise and Sport, there’s a direct relationship between exercise intensity and music tempo. For instance, cyclists prefer 125-140bpm, while runners prefer 123-131bmp. Being able to sync your exercise to the beat, often the salient percussive element of the song, makes it easier to achieve optimal performance.

This seems to be the case in my experience. Between my three most frequent modes of exercise—running, rock climbing, and cycling—upbeat music is reserved for cycling and running while less intense songs are preferred when climbing. While I’m sure some rock climbers swear by uptempo electronica, I can’t imagine enjoying a session with that genre of music. 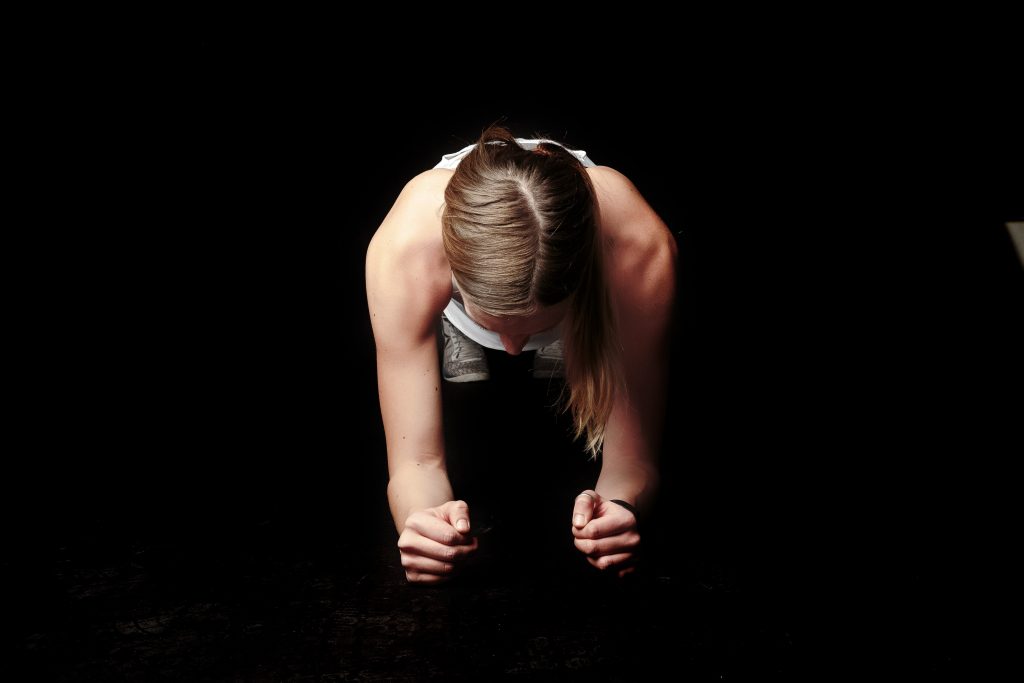 You may still feel the burn, but you’re less likely to perceive it when listening to music.

If you’re in the minority who are unaffected by music while exercising, then at the very least it serves as a distraction from the pain.

North and Hargreaves, authors of The Social and Applied Psychology of Music, investigate why certain songs elicit profound responses from listeners and if music is an effective tool in aiding ill patients. Their findings circle back to the benefits of music during exercise. They suggest music diverts the brain’s focus away from perceiving pain.

The explanation is similar to how auditory masking works: there are competing stimuli. In the case of auditory masking, it’s a loud sound opposing a quieter sound. Regarding pain and music, though, the brain’s energies are divided between focusing on pain and on music. In both instances, auditory masking and exercise, our brains only have so much processing power. An enjoyable song provokes the brain to concentrate on the tempo, melody, and so on, rather than solely on physical distress.

Our brains can only process so much stimuli simultaneously. Throwing music into the mix of exercise refocuses the brain's attention.

Additionally, a study published in the Journal of the American College of Cardiology noticed those who listened to music while on a treadmill exercised for longer than those without music. It also observed a related trend: those who listened to music expended more energy per one’s individual mass than those who exercised sans-music. This secondary benefit makes sense, as more time spent exercising is likely to lead to more calories burned if all other variables are controlled for.

What about outdoor athletes; isn’t safety a concern? 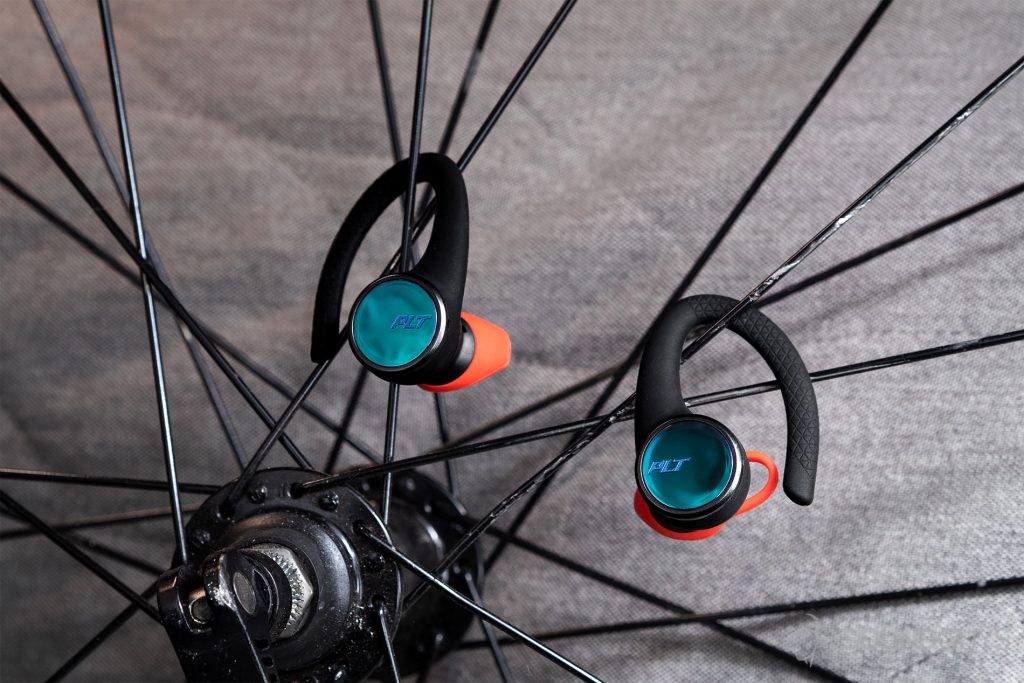 The Ambient Aware ear tip design makes these a viable option for outdoor runners and cyclists.

Yes, safety is first, second, and third when taking to the streets. If you despise stationary bikes, treadmills, or weights, listening to music may still benefit your workout. You just have to be more vigilant than your indoor counterparts. This means picking out a pair of headphones with designated safety features. Whether you invest in bone conduction headphones or a pair with Ambient Aware mode, being aware of your surroundings is non-negotiable.

As someone who enjoys extended outdoor bike rides, I use the right earbud and ensure my surroundings can be heard. A great, durable option for this are the Plantronics BackBeat Fit 3100. The earhook design keeps the earbuds stable. Plus, the ear tips allow external noise in, something we condemn in other circumstances. It’s a fair trade-off between enjoying your heart-pumping tunes without compromising awareness.

In all fairness, there are benefits to exercising without music, too. Maybe you find it meditative to hear your surroundings in full, or maybe you find yourself becoming too distracted by your favorite beats. As per always, it’s your decision to exercise how you prefer. Me? I’ll stick to a reliable pair of in-ears while breaking a sweat.

Next: What makes a great pair of workout earbuds?