Bose offers the newest addition to your budding friend group

For those who like to host events and are already knee-deep in the Bose ecosystem, the SoundLink Color II makes for a great addition to the collection. It's water-resistant, compact, and gets surprisingly loud.

The shift in seasons is nature’s way of ringing in neighborhood block parties. Whether they’re a mere social obligation or something that you earnestly enjoy, you’re going to want some sort of musical ambience. The Bose SoundLink Color II has an on-the-nose address for this need with “Party Mode,” but is it good enough to make your gathering the talk of the town? 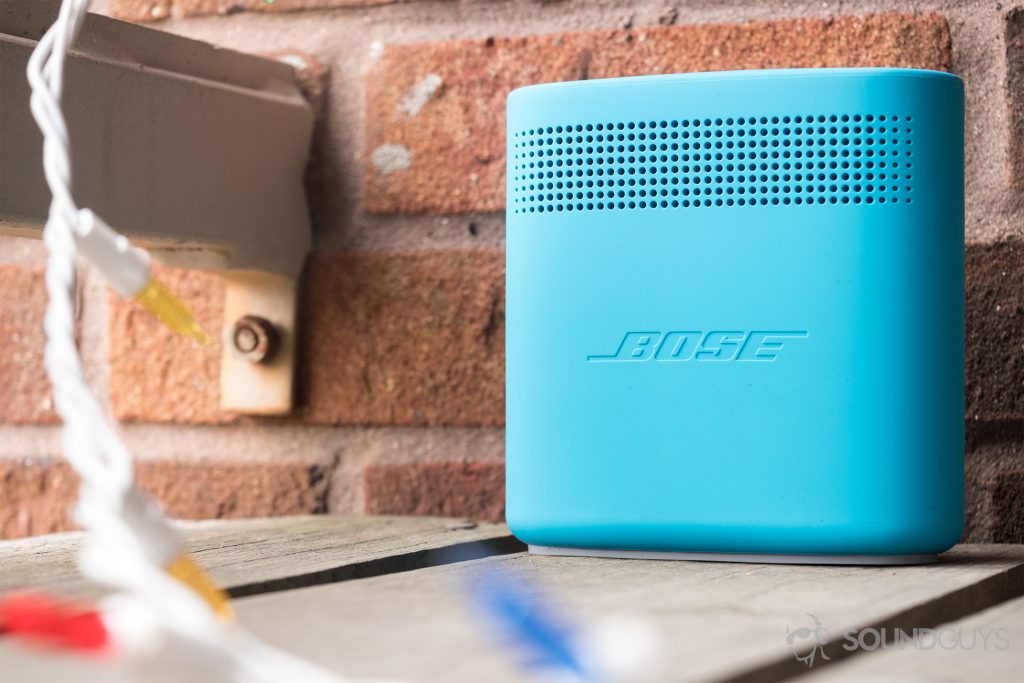 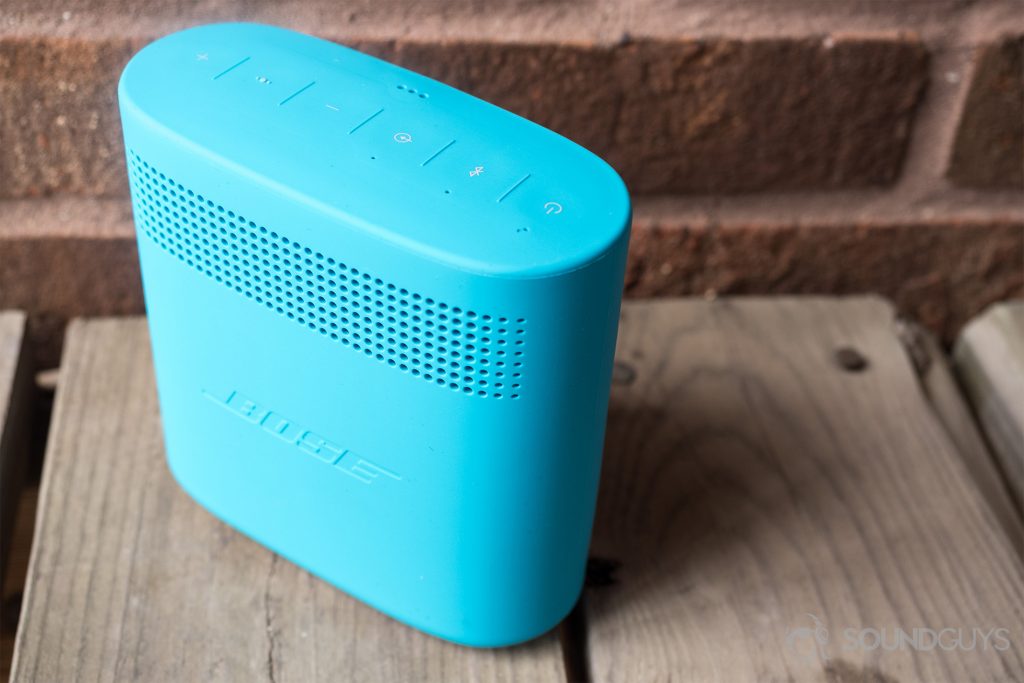 Like a little teapot, this speaker is short and stout. It takes up less space than the Beats Studio 3, which is good since portability is a recurring theme in Bose’s ad campaign. Music brings us together, and Bose wants to facilitate these gatherings anytime, anywhere. A silicone covering makes the speaker easy to hold, even when wet. That’s right. The IPX4-certification protects this speaker from splashes. Though, it can’t be submerged. If you’re looking for something fully water-proofed, click on over to our Best Waterproof Bluetooth Speakers list.

Beneath the silicone sheath, dual-opposing, passive radiators create a loud sound while keeping surface vibrations to a minimum. Reflecting back on my time with the Bose SoundLink Color II, this hardware was severely under appreciated. Switching back to my outdated Klipsch iGroove compelled me to break out the Richter magnitude scale.

Music brings us together, and Bose wants to facilitate these gatherings.

Users can alternate between source devices, access virtual assistants, and control playback functions from the six-button panel. Oddly enough, Google Assistant relays responses almost inaudibly. To hear it, I have to place the speaker next to my ear, which is as awkward as you’d imagine. Generally speaking, the Bose Connect app is a nice idea; yet, it seems to derive pleasure from frustrating users and crashes often. 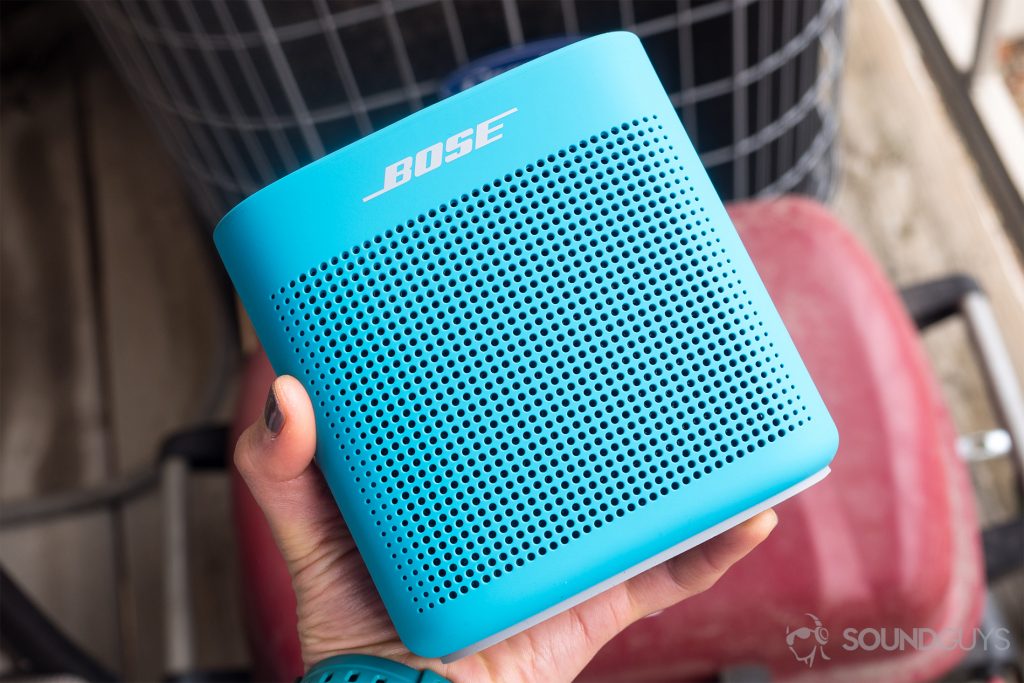 The Bose SoundLink Color II can fit one hand due to its compact size.

The Bose SoundLink Color II has an optional “Party Mode” (page 25). Sadly, no, this doesn’t mean that John Travolta—circa 1977’s Saturday Night Fever—can be summoned at-will, but it does double volume output while offering flexible placement options. Additionally, the app automatically updates the unit’s firmware (Ed. note: This works with other products, such as the SoundSport Free.) Though Bluetooth codec support isn’t explicitly stated, latency issues are virtually non-existent. Now you can laze around, endlessly watching YouTube videos without being forced to lip-read.

Don’t want to talk to friends, that’s okay. Talk to Siri instead.

Virtual assistant-access is compatible with Siri and Google. By depressing the multi-function button for two seconds, the respective assistant is ready to answer all of your ridiculous and revealing questions. The microphone is appropriately placed on the top panel and easily picks up voice commands. If only it iterated responses just as well.

Why does IPX4-certification matter… and what is it?

All that you really need to know is that the Bose SoundLink Color II can take more than a few splashes, but don’t try to skip it like a rock. You’ll be left with a water-logged paperweight.

MultiConnect is as easy as the initial pairing process, and it’s a feature that I took advantage of more than I was expecting. All you have to do is hold the Bluetooth button down until a voice informs you that it’s “ready to pair another device.” Being able to swap from a phone-streamed podcast to a laptop-streamed episode of Bates Motel made my dependent tethering to the digital world that much easier to maintain. Both the SoundLink Color II and SoundSport Free struggle to maintain a reliable connection within normal parameters.

In order for optimal playback, Bose says to keep your phone within nine meters—30 feet—of the speaker. This works for downloaded media, but most of us use streaming services. With my phone placed just four meters from the speaker, Spotify streaming quality is degraded. (WiFi speed oscillates from 36-48 mbps.) If streaming stability is paramount, you can use the auxiliary input—assuming that your phone supports it.

On a more positive note, the speaker fabulously maintains dual-connectivity. Switching between devices is easy, as the speaker recognizes them automatically. And, initial pairing is hassle-free and reconnecting is a simple matter of powering your phone and the speaker on. Though I mentioned how voice commands are relayed quietly, the act of making those commands is an immediate process. Though Bose doesn’t explicitly state compatible Bluetooth codecs, there’s no lag-time between depressing the multi-function button and the speaker’s response. Battery life is underwhelming and falls short of the stated eight-hour battery life.

Charging from zero to 100 takes just under three hours with a recommended 1000 mA power source, and playing the speakers at 50% volume provides seven hours and 15 minutes of playback. For parties and outdoor activities, volume will likely be cranked to 60 percent, if not more, resulting in a greater dip in battery life. In all fairness, the speakers get awfully loud for their size. For personal use, there’s no need to push volume beyond 30 percent, unless you’re avoiding conversation. At that point, forget Bose; instead, go with the Marshall Stanmore, and crank it up to 11. The SoundLink Color II is one of many Bose products that is compatible with the Bose Connect app, which lets users control volume, update firmware, and switch between devices.

This speaker gets loud. When playing these on my balcony, I clearly heard songs over the neighboring construction. To meet the bass emphasis that most listeners are accustomed to, volume needs to be set at 75 percent. Pro tip: for optimal bass performance, position the Bose SoundLink Color II so that the back is a foot from a wall. Also, elevate the speaker to improve sound projection.

The Bose Connect app is a nice idea; yet, it seems to derive pleasure from frustrating users and crashes often.

When taking the speaker outside, the mids get lost due to auditory masking. Environmental noises skew our perception of sound. Since the human brain has limited auditory bandwidth, it lops off seemingly imperceptible information. Though this is important for survival reasons, it’s not great for the speaker’s perceived sound quality.

Him & I, an autobiographical radio hit by G-Eazy and Halsey, recounts the artists’ romantic relationship and uses a powerful beat to accentuate their defiant, rebellious natures, which are even more pronounced when the two are coupled. The sub-bass reproduction is tenuous compared to the upper-bass. This is most obvious during the verses, when the vocals divert attention from the lows.

The Bose SoundLink Color II can fit one hand due to its compact size.

G-Eazy’s spoken vocals are clearly separated above the low-end. Though vocal fry is a polarizing topic, it’s impressive that the SoundLink Color II reproduces this facet of Halsey’s timbre clearly. This is especially apparent when Halsey sings the hook of chorus, “in the end, it’s him and I.” Her pitch lowers ever so slightly as she sings, “I,” and the speaker conveys this subtle change.

Bringing out the highs gives the product leeway to falter in other areas, because it seems more detailed.

Switching gears to Cold War Kids’ Tell Me In The Morning, it’s clear that the treble receives extra processing, which manifests as overemphasis of the highs. During the verses, the tambourine is too forward. As a result, the treble inappropriately overshadows the mids throughout the song.

Bose didn’t go so far as to make the treble sibilant, but its exaggeration is obvious. This isn’t automatically a strike against the overall sound, as many consumers favor this kind of emphasis. Bringing out the highs gives the product leeway to falter in other areas, because it seems more detailed and clear, relative to baseline products. Located on the top panel, the microphone is good at picking up voices for phone calls or virtual assistant commands.

If you’re already devoted to the Bose ecosystem, absolutely; the Bose SoundLink Color II will be worth your while. Plus, the ability to sync-up two speakers is great for small to medium gatherings and gives hosts flexibility when it comes to sound placement. Though still costly, the $129 isn’t going to break the bank like the Tivoli Audio Model One Digital. This little speaker has great functionality; plus, being able to update the firmware via the app, gives me hope that connection issues will be resolved.

Now, if you want to save a couple bucks on a comparable speaker, mosey on over to our review of the JBL Charge 3. The black model currently goes for $119.95, is IPX7-rated, and lasts 20 hours, instead of the Bose SoundLink Color II’s seven-ish hours.