Dive into all your summer adventures with UE’s cannonball speaker.

If you're looking for a speaker to accompany you on every summer adventure, the UE Wonderboom 2 is a great option. The lack of an integrated microphone is annoying since it means you can't access a voice assistant, but it's a small price to pay for a speaker that floats.

It’s a Saturday night, everyone’s gathered around the pool, and you’re listening to the birds sing and crickets chirp. It sounds lovely. After some time, you think, “Man, Biz Markie’s song Just a Friend could really turn this night into a party.” You realize whipping your phone out won’t do but, hey, you just got that spiffy new Ultimate Ears Wonderboom 2 speaker. After the first measure, everyone recognizes the song and sings along with an inebriated cadence.

Ok, it may not go down exactly like that but you get the picture: if you want to be the life of the party there’s nothing better than playing DJ. Ultimate Ears’ latest waterproof speaker makes it easy to turn a summer hangout into a memorable montage with a few drawbacks.

Who is the Ultimate Ears Wonderboom 2 for? 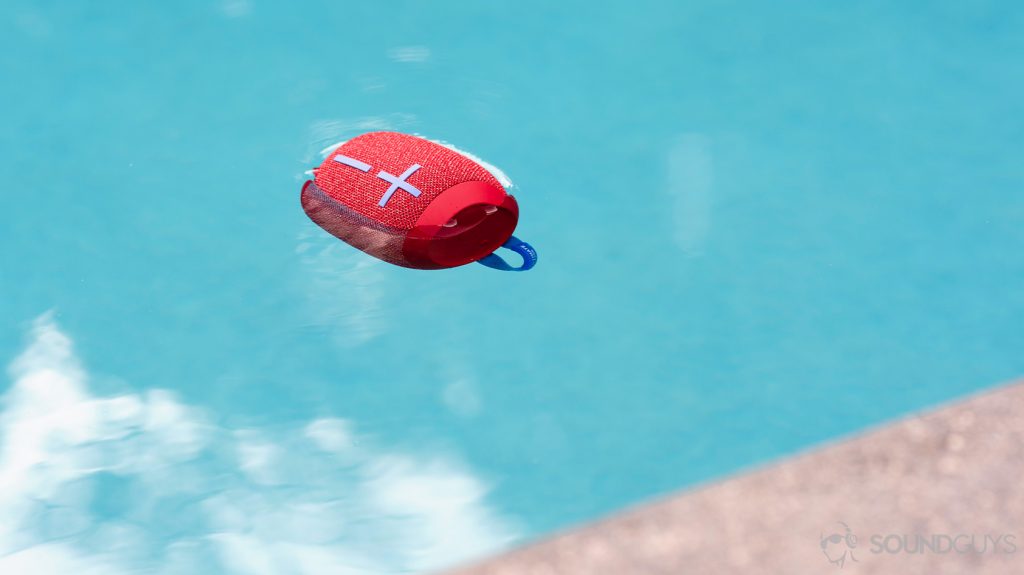 The speaker can be placed directly in the pool and float about.

The Ultimate Ears Wonderboom 2 houses three buttons on the top panel. Oddly enough, you can only skip tracks. If you want to go back, you need to do so from your phone.

If you’re familiar with the original Ultimate Ears Wonderboom, you’ll feel at home with the Wonderboom 2. Its design is nearly identical save for the updated elastic loop and the “outdoor boost” button located on the bottom panel. Just like before, this tapered cylinder floats, meaning music can emanate from the middle of your pool party. It houses two 40mm drivers and two passive radiators, which is enough to make waves.

The signature plus and minus buttons retain their vertical placement along the speaker. Just like the original Wonderboom, pressing both buttons simultaneously emits a tone indicating battery life. It’s a nice idea, but not supremely helpful as the paperwork doesn’t specify what battery level corresponds to each tone. The top panel houses three discreet buttons: Bluetooth pairing, playback controls, power. It’s odd, you can skip tracks but can’t return to a previous one. In order to do that, you’ll need your phone. 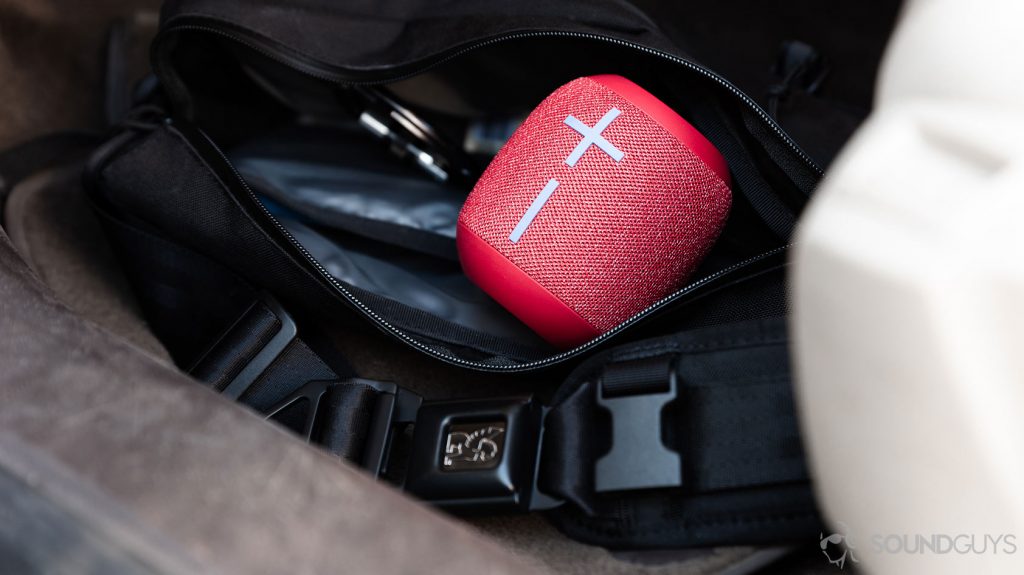 While it’s easy to hook the speaker onto anything, the Ultimate Ears Wonderboom 2’s bulbous shape makes it difficult to fit into small sling bags.

Another strange omission: an integrated microphone. We’ve seen waterproof speakers, like the Bose SoundLink Micro, include this so it’s not a technological limitation. Sure, a portable speaker isn’t the best way to hop on a conference call, but it is useful for voice assistance. Being unable to access Google Assistant isn’t necessarily a dealbreaker, though. After all, this is marketed as an outdoor companion more than anything else.

The Wonderboom 2 lacks an integrated microphone, meaning no access to voice assistants or phone calls.

Drawbacks aside, I love the elastic loop and used it more often than expected. What’s more, my car’s Bluetooth can be rather fickle, so I connected my phone to the Wonderboom 2 instead. The little speaker sat atop a cup holder and filled my sedan with sound. Battery life was a non-issue for me, but for anyone considering taking this on an extended road trip, it still plays music when charging. The original Wonderboom has a different strap and top panel. However, the second-gen model retains the same stout, cylindrical shape. 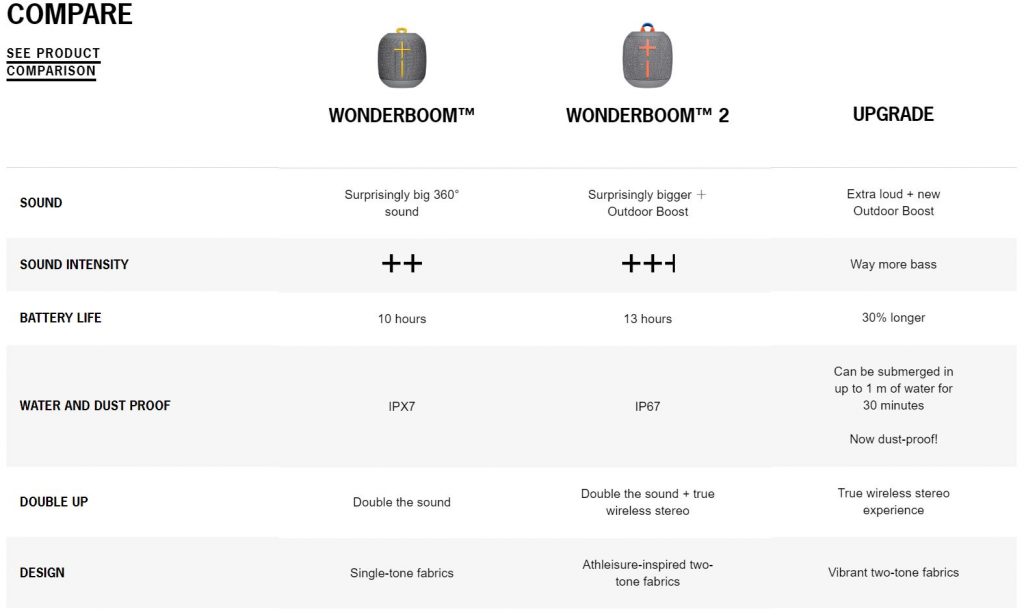 Additionally, Ultimate Ears beefed up the battery to last 30% longer than before. While we weren’t quite able to reach the full 13 hours, it’s significantly better than the first model. You also get the benefit of “outdoor boost mode,” which increases the maximum output from 86dBC to 87dBC. It projects a louder sound at the expense of midrange clarity: vocals become less audible. The last difference is that you can now pair two Wonderboom 2 speakers for stereo listening, whereas before pairing two Wonderbooms just doubled the loudness. 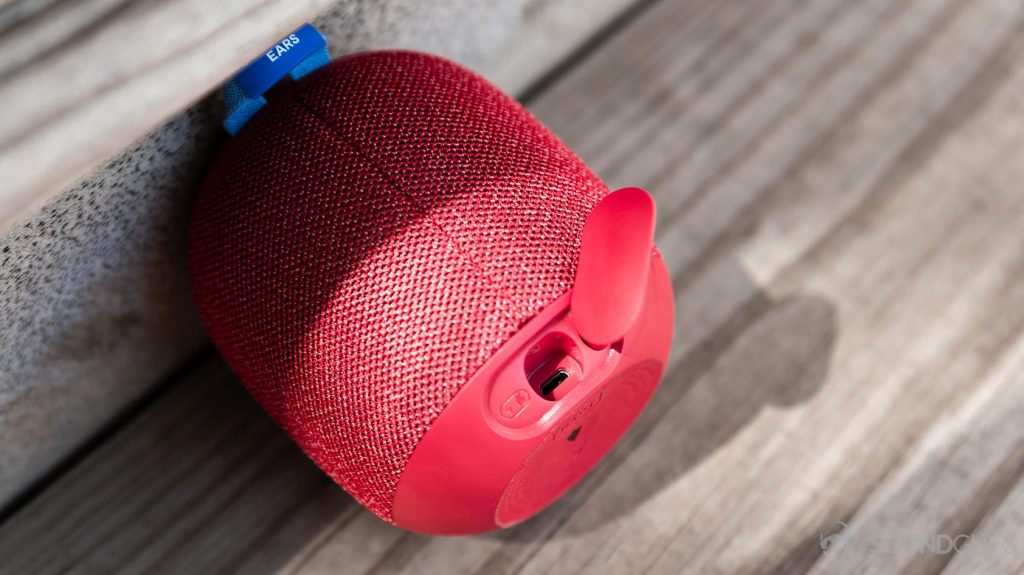 The Wonderboom 2 charges via microUSB, an outdated choice on Ultimate Ears’ part.

When subjected to a constant 75dB output, the Wonderboom 2 lasted 9 hours, 44 minutes. This is underwhelming relative to UE’s posited 13-hour battery life, but is a marked improvement over the first-gen model. It takes 2.6 hours to charge via the included microUSB cable. Just like the lack of microphone integration, the microUSB input seems a design oversight. 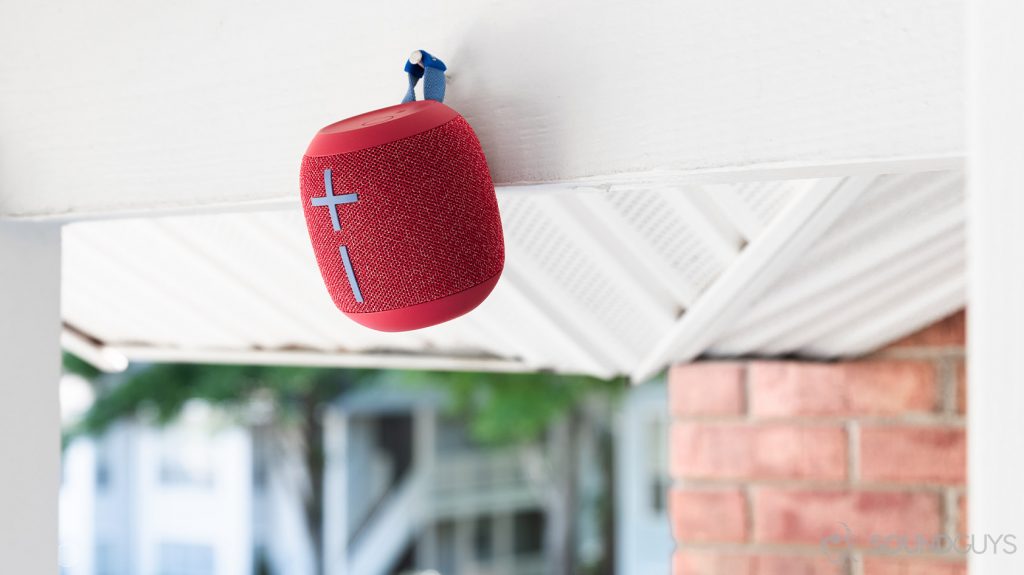 It’s easy to hang the speaker from a tree branch or, in this case, a nail on the balcony.

The Ultimate Ears Wonderboom 2 operates via Bluetooth 5.0 and supports SBC only, which is fine since you’ll likely be taking this outside where the benefits of high-quality codecs would be rendered null. You may connect two devices simultaneously for easy alternating. What’s more, if you have two Wonderboom 2 speakers, or a friend with one too, you can pair them together and are afforded a 33-meter Bluetooth range.

To pair to another Wonderboom 2 speaker, press and hold the center button. The same button lets you toggle between mono and stereo mode. Again, doing so doubles the loudness and enables stereo listening for more realistic reproduction of sound. It also pairs with the first-gen Ultimate Ears Wonderboom (mono-listening only) but won’t do so with the Ultimate Ears Boom, Megaboom, Blast, or Megablast speakers. 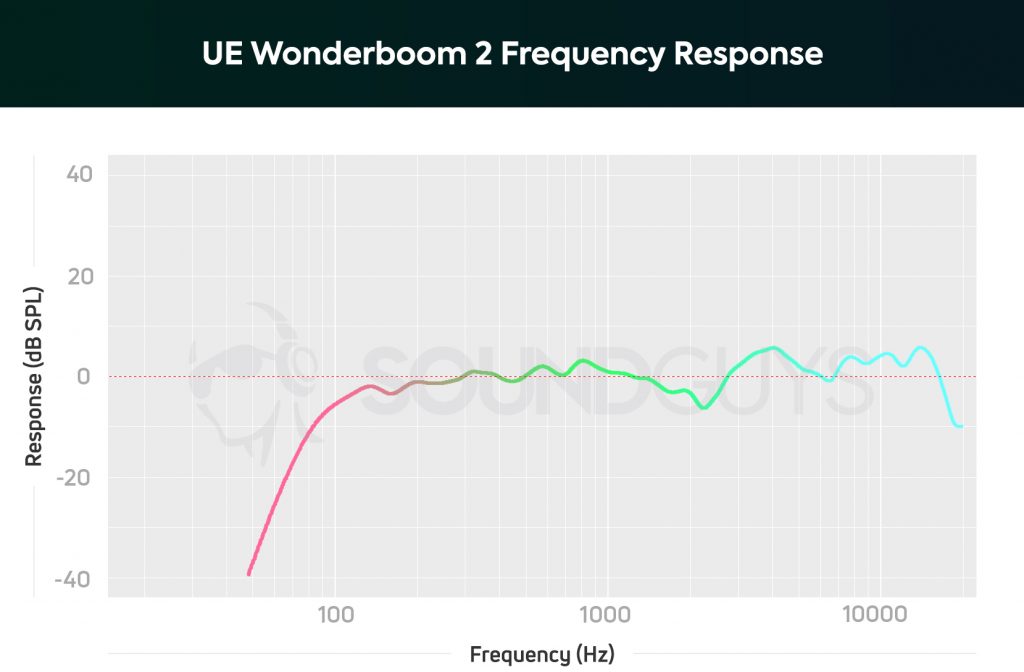 Objectively, the speaker is lacking in the sub-bass department. These frequencies don’t become noticeable until 80Hz, even then those notes are half as loud as 200Hz. I’m surprised UE didn’t grossly emphasize the bass more; granted, I prefer this as vocals are easier to hear. There isn’t much in the way of auditory masking. However, if you increase the volume beyond 70% clarity is reduced because the harmonic resonances become distorted. If you’re outside, this is completely fine, though, since loudness takes precedence over clarity in party situations.

The de-emphasized sub-bass is apparent in Sam Henshaw’s song Church. At 0:45, the bass drops and transitions the song from the bridge to the chorus. Upon my first listen of Church with the Wonderboom 2, I was anticipating the drop to have some oomph to it. Unfortunately, it’s nearly impossible to register. That said, some headphones emphasize the bass so much it renders Henshaw’s vocals, “Wake up and get yourself to church,” inaudible. With the Wonderboom 2, vocals are almost always easy to identify.

Treble emphasis isn’t too noticeable but in moments where there are cymbals or hi-hats in tandem with kickdrums or synthesized bass notes, music reproduction sounds strange with this speaker. It’s because of how the marked sub-bass reduction contrasts with the perceptible high-frequency exaggeration. Take the second verse (2:06): there’s a constant low-end beat carrying the song, but our ears are drawn more to the louder, metallic ringing of the tambourine hits.

Should you buy the UE Wonderboom 2? 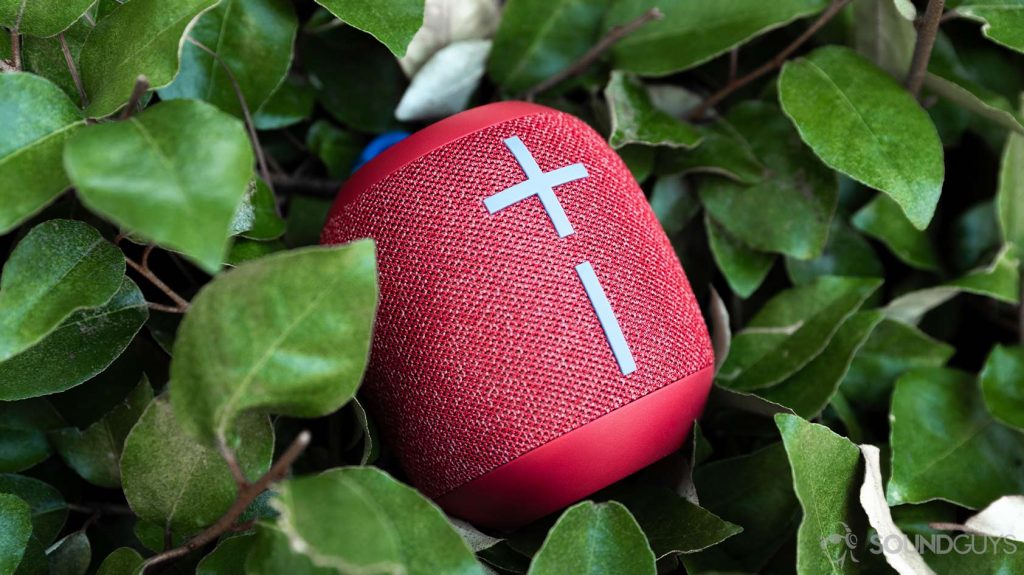 The plus and minus buttons are easy to press.

If you want one of the most durable, portable speakers available, yes: you should get the Ultimate Ears Wonderboom 2. Its ability to float is a cool, functional party trick and the updated looping mechanism is great. However, if dust-resistance and extended battery life don’t matter to you, grab the original Wonderboom for $60 rather than $100.

Can I connect to more than one other speaker at a time?

Unlike many Ultimate Ears Bluetooth speakers, the Wonderboom 2 doesn't support the Party Up feature that allows connection to up to 150 other Boom speakers. Products like the Ultimate Ears Boom 3 and Megaboom 3 support this feature.

UE Wonderboom 2
Ultimate Ears WONDERBOOM 2 is a super portable speaker that rocks a surprisingly big sound - anywhere. Heading outside? Hit the all-new Outdoor Boost for louder, crisper audio that's specially tuned for outdoor listening. With 13 hours of battery life, it'll rage 'till dawn. It's got a rating of IP67, so it's super waterproof. And dustproof. And it floats. Plus, you can wirelessly pair two WONDERBOOM 2 speakers for an even bigger stereo or mono sound. It's your shower buddy, your beach volleyball captain, and the "big splash" at your next pool party.