No Bluetooth 5 or high quality codecs
Sound quality is good for hikes or the beach, but isn't great

The Flip 5 is a worthy successor to the Flip 4 and if you're going to be heading out for a weekend trip or just going to the backyard, these are definitely worth the asking price.

There aren’t many products that get universal recommendations. Everything from cars to kitchen knives has a plethora of opinions and reviews for people to look into before they buy. That isn’t really the case for affordable, waterproof Bluetooth speakers. For years now if you wanted a speaker that you can bring to the beach and won’t break the bank my answer has been to just get the JBL Flip. While the Flip 4 has been the go-to for a few years now we have the JBL Flip 5, so how is it?

How’s the build quality of the Flip 5? 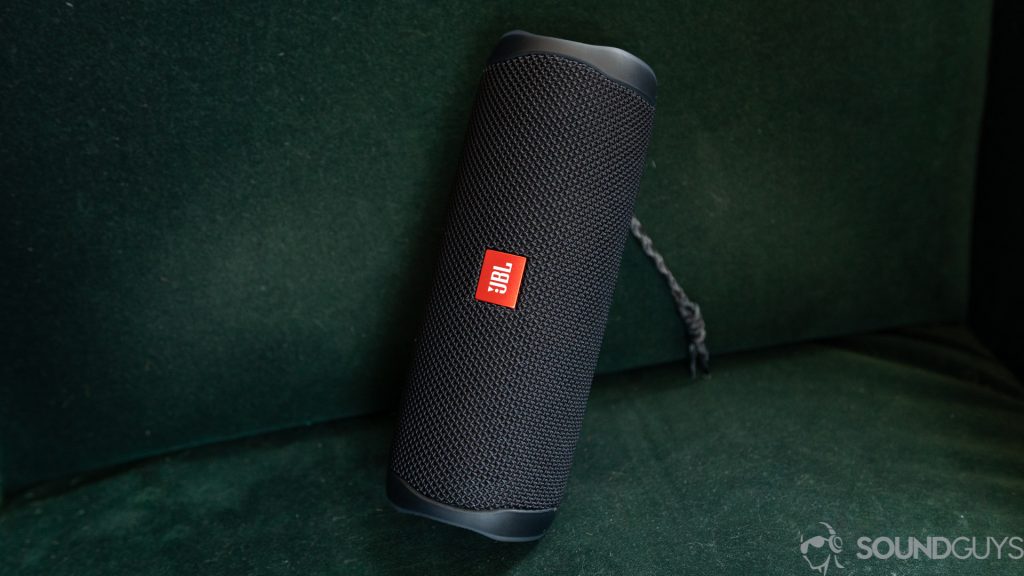 On the front of the speaker is the red JBL logo.

If there’s one thing the JBL Flip series is known for, it’s for being tough. The Flip series started out splashproof, and eventually made the jump to being completely waterproof—and that’s still the case with the new JBL Flip 5. It’s wrapped in a durable fabric material that gives it an IPX7 rating, meaning: it can survive being submerged in up to three feet in water. On either end of the speaker is a tough rubber that protects the exposed bass radiators. Down the back of the speaker is where you’ll find the power and Bluetooth pairing button as well as the USB-C input for charging the speaker up. Both buttons here have lights around them for when the speaker is on and connected to a source device. It’s a useful feature that I wish was also used on the playback buttons that’s built into the fabric. While it’s easy enough to figure out which button is which thanks to them slightly protruding away from the fabric, I feel like they would be much easier to use in low light situations if they lit up or were at least painted a different color. While I enjoy the black on black look I think having the buttons be white or some other vivid color that pops off the speaker would help with legibility. It’s still small enough to fit in your bag and comes with a string, though I’d recommend swapping it out for some paracord.

Obviously I’m nitpicking here, because the JBL Flip 5 is built about as good as a $100 speaker meant for your next adventure can be. There’s even a small loop built into the speaker that comes with a string so you can hang it from things like branches or even shower heads. Pro tip: if you pick one of these up I would recommend ditching the cheap shoelace string and replacing it with some strong and cheap paracord that can come in handy in emergency situations while hiking. The design of the speaker hasn’t changed much from the JBL Flip 4. The Flip 5 is still cylindrical in shape and isn’t heavy at all weighing in at just 540 grams. Sticking this speaker in the water bottle pocket of any backpack would be a perfect fit. Another underappreciated thing about the Flip series is that they come in a bunch of different colors so whether you want teal, all-black, or even pink you can find one for you.

How to pair to the JBL Flip 5? The only lights are in the power and Bluetooth buttons.

Pairing to the JBL Flip 5 hasn’t changed from any of the previous versions and it’s still just as seamless. All you need to do is:

Connection strength is solid, and I had few problems playing music anywhere in my apartment from my iPhone 11 Pro in my pocket. When there was an issue, though, it was an issue that required powering the speaker on and off before playback resumed normally. Twice during testing, the audio just began to skip and stutter uncontrollably which was annoying—but thankfully not permanent. Simply powering off the speaker seemed to fix the issue, but it’s still not something you want to be dealing with. Unfortunately, there are no high quality Bluetooth codecs to speak of here so there was a huge lag while watching YouTube videos. For whatever reason, the audio never synced up with what the person was saying, and because JBL removed the 3.5mm input: there’s no real way around this issue. It’s a bit of a bummer, since you can’t use this speaker with anything that doesn’t have Bluetooth. 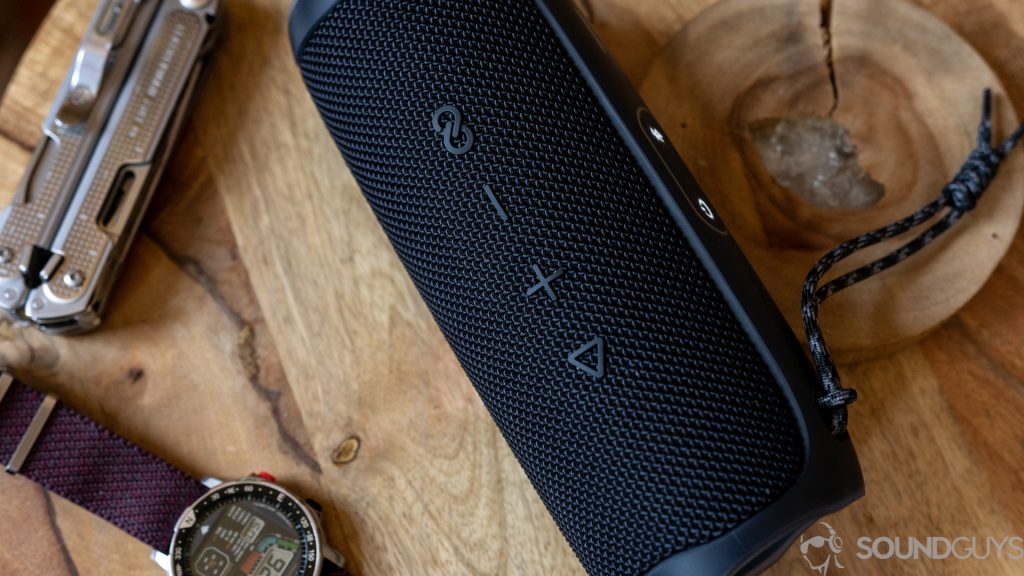 Along the side of the speaker are the playback controls button built into the fabric.

What the JBL Flip 5 does have is the PartyBoost mode which I still find to be one of the most useless features on JBL speakers. If you click the dedicated PartyBoost button on the speaker then you can pair a second JBL speaker for stereo sound or even just to add more life to your party. I personally don’t know anyone who has ever bought more than one speaker, but if you decide to pick up a second speaker, already have one, or have a friend that also has a fairly recent JBL speaker, then maybe you might find this feature useful. In my experience, just one speaker was more than enough for any hike or trip to the beach I’ve ever been on. If you find yourself needing a second speaker to power your parties often then it might be worth investing in something like the JBL Boombox or the UE Hyperboom, both of which are giant speakers that you shouldn’t have a problem partying along with.

Besides that you’ll get the standard playback buttons like the volume up or volume down buttons designated by the plus and minus signs, respectively. Then there’s the play/pause button which will let you pause tracks or skip to the next song if you double tap it.

How long does the battery of the JBL Flip 5 last? The speaker charges via USB-C which has orange so you can see it.

JBL claims that you’ll get 12 hours of constant playback with the JBL Flip 5, and in our testing we got 9 hours and 27 minutes which isn’t bad at all but falls just short of the claimed 12 hours. Still, that’s more than enough for an average day at the beach or a good day hike.

How does the JBL Flip 5 sound? 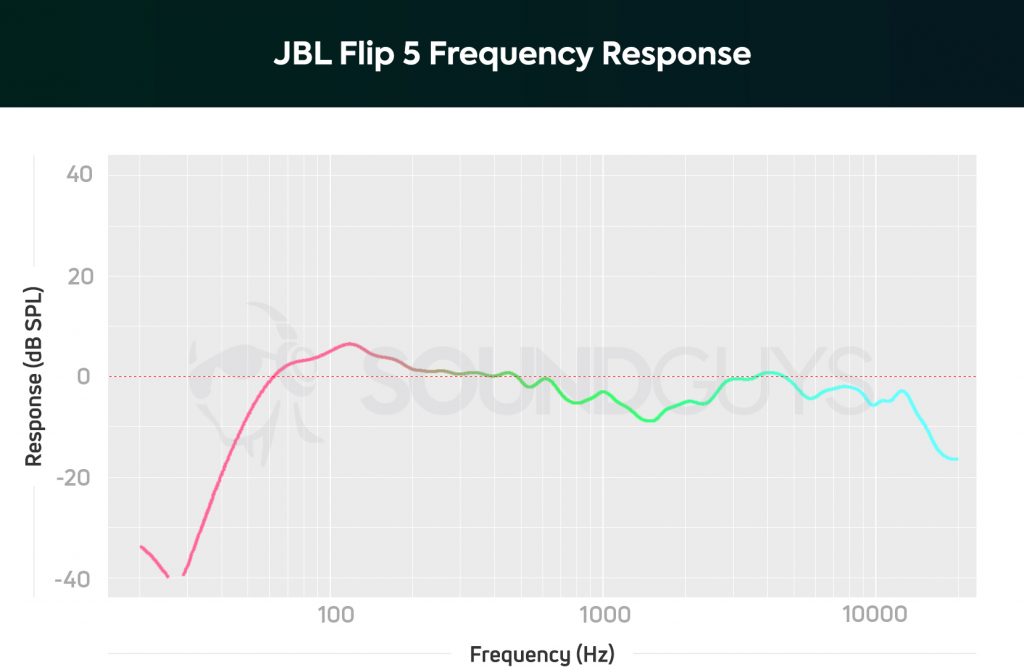 The JBL Flip 5 still sounds good enough for what you’re going to be using it but don’t expect amazing sound.

Before you read too much into a heavily-smoothed chart, recognize that the Flip 5 is a budget Bluetooth speaker. The rolloff at 60Hz is something that you’re not only able to ignore completely, but you’d have to live with no matter what speaker you buy under a few hundred dollars. Additionally, as you’re likely going to be using this in less-than-ideal environments: this is merely a ballpark measurement to give you a rough idea about the Flip 5’s performance, and a rough idea only. It won’t always be representative of what you’re going to hear, because you’re not going to be listening to this in a sound-dampened or anechoic environment. You’re going to listen to it in a room, or a noisy place like the beach, or in a yard.

JBL upgraded the driver inside the speaker to give it more of a deeper low end, and the company succeeded from what I could tell. JBL’s wireless speakers tend to follow a signature sound that’s roughly similar to the Harman target curve. Essentially, bass notes from middle-C and lower see a bump from 2-8dB, mids are evenly emphasized, and the highs are gently attenuated. The Flip 5 doesn’t buck this trend, and you’ll likely be happy with the sound without too much futzing with any in-app equalizers or junk like that. Take it out of the box and start using it.

The bass response definitely sounds like it was given more of an emphasis this time around than the JBL Flip 4, but it still isn’t going to be the greatest thing you’ve ever heard. The difference is subtle, and if you’re hanging out in the yard or the beach: chances are you’re streaming off of a lowish-quality service like Spotify or Apple Music. If you aren’t really paying attention to the subtleties of the bass response, you won’t hear them anyway. Still, it was a welcome addition in The Less I Know The Better by Tame Impala, where the groovy bassline is the main part of the song in my opinion. It sounded good enough to hear but wasn’t able to get super low due to the hard drop off at under around 100Hz.

As the mids are less emphasized against the lower-frequency notes, sometimes they can be tougher to hear in music with a super strong bass line. This isn’t a huge deal when listening to podcasts since there wasn’t a lot going on besides voices, but in songs with a lot going on like Ghost Under Rocks by Ra Ra Riot I found that some instrumentation was lacking in clarity as things like guitars and strings were battling for volume with the vocals throughout the chorus. Highs were also pretty quiet, and you may find yourself boosting the levels from time to time. Throughout the same song, the shakers and cymbals throughout the background of the song sounded more like weird hisses like cymbals just because of how low and unclear they were.

Does the JBL Flip 5 have a microphone? 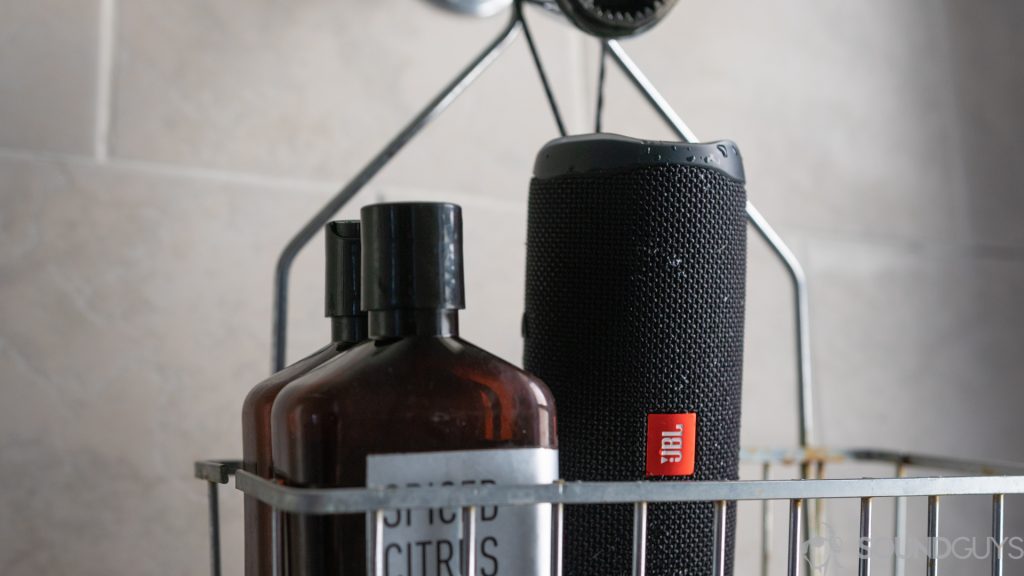 The JBL Flip 5 is perfect for outdoors or just the shower.

No, the Flip 5 does not have a microphone. So if you were hoping for a speaker to answer phone calls on or if you want access to your phones personal assistant then you won’t get that here.

Should you get the JBL Flip 5? 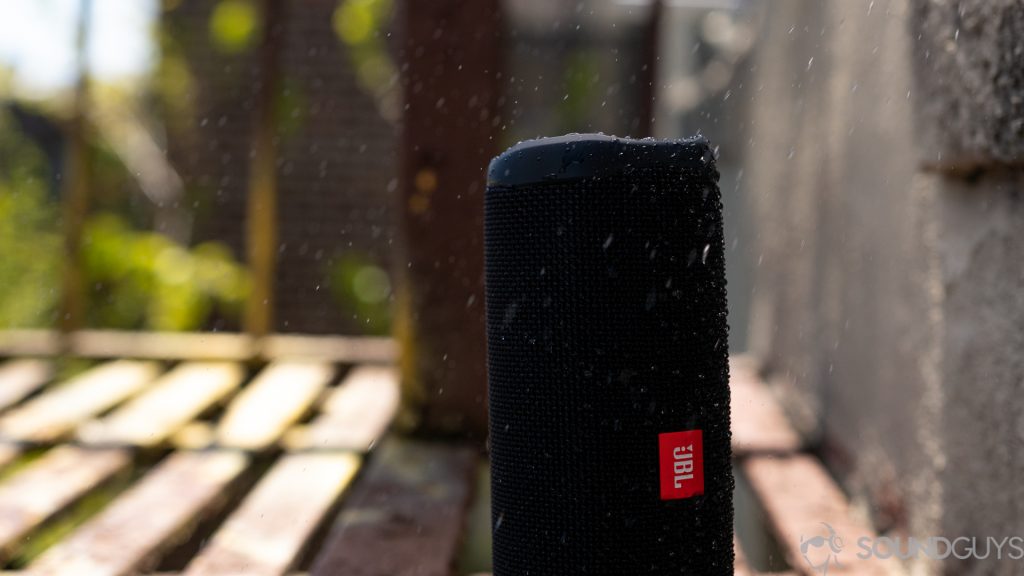 The JBL Flip 5 is covered in an IPX7 fabric.

If you don’t already have a Bluetooth speaker and are looking for an affordable speaker to knock around on your next adventure: yes, the JBL Flip 5 is absolutely worth it. It’s got a tough waterproof fabric, good sound, decent battery life, and its portable size makes it a great option for just about everyone. My only hesitation here is that if you already have a JBL Flip 4, there is absolutely no reason to rush out and upgrade. You’re not missing out on much besides USB-C charging, and a slightly upgraded driver, but do those really matter in a speaker that you just plan on beating up anyway? For most people the answer is no.

The Flip 4 can be also be found for much cheaper online, but as long as you’re not paying over $100 for the Flip 5 I’d say just spring for the newer model. That said, if you can find the Flip 4 for way cheaper then you might be better off just picking up one of those as it’s still a solid Bluetooth speaker that can handle your excursion. Still, at under $100 you’re not going to be upset with the Flip 5 and it’s a worthy upgrade to what was already one of the best Bluetooth speakers around.