Still one of the best portable speakers you can buy.

If you're knee-deep in the Bose ecosystem and want a travel-friendly speaker that can withstand nearly anything, the SoundLink Micro is a great addition to have. Otherwise, save some money and go with something like the JBL Clip 2. 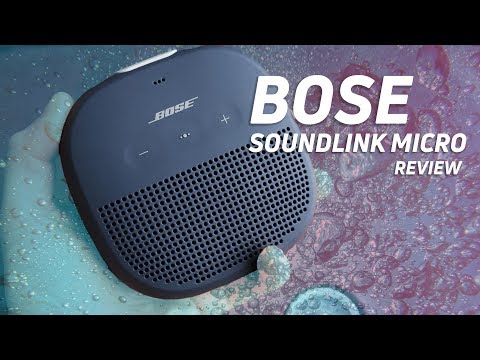 Portable speakers are a great way to bring the party anywhere, but they often forgo sound quality for portability. That’s not the case with the Bose SoundLink Micro; nearly two years after its release, this waterproof speaker remains one of our favorites. It even has an elastic strap that can loop around your bike or bag during an outdoor adventure day.

Editor’s note: this review was updated on January 20, 2021, to match formatting to SoundGuys’ current style.

Who’s is the SoundLink Micro for? The Micro can easily hook onto a backpack and project sound during a hike or just stay there during a commute.

The SoundLink Micro is available in black, midnight blue, and orange. A soft-touch rubberized finish, identical to the SoundLink Color II, makes it easy to grip while protecting it from the environment, namely water.

The Micro is versatile, portable, and durable enough to keep up with nearly every pace of life.

Not only is the Micro speaker impervious to spills, but it can also endure full submersion for up to 30 minutes thanks to its IPX7 rating. Unlike the UE Roll 2, the Micro doesn’t float, not even a little. But when it does emerge from the depths, drying is quick due to the rubber exterior. Like most humans, I enjoy singing in the shower and the SoundLink Micro has no trouble playing music as skin-scalding water pours down. I’ve been using this regularly for nearly two years now, and the speaker has held up to soap splashes, drops, and everything in between. IPX7 certification allows for the SoundLink Micro to be fully submerged for a maximum depth of 1m for up to 30 minutes.

For the curious, the speaker continues to play music while submerged. Quite frankly, however, the audio quality is drowned out to say the least. Just for kicks, I tried to use Google Assistant while it was submerged and couldn’t get it to work. When out of the water, the Micro’s microphone effectively registers voices for the respective virtual assistant.

Sure, water-proofing is great and proper implementation is impressive, but the Bose SoundLink Micro is also a generally durable speaker. The silicone strap? Yeah, it’s tear-resistant. Try as you may, that strap knows resilience. Additionally, the external silicone rubber material—though not officially shock-proof—minimizes the vulnerabilities of the speaker and holds up to drops quite nicely. On the rear of the SoundLink Micro is a tear-resistant strap that can be hooked onto nearly anything.

What’s more, the SoundLink Micro can enter speakerphone mode which lets a user take calls while her phone is in another room. Mic quality, well, it’s fine. People said that I sounded echo-y, but they could hear me well enough. That’s what matters in a mobile speaker like the Micro.

That’s right, listeners with a death grip on the 3.5mm aux cable won’t be in love with the Bluetooth-only SoundLink Micro. Though the official Bluetooth codecs aren’t stated in the bundled paperwork that Bose provides, there are noticeable latency issues with the SoundLink Micro. The Bose SoundLink Micro fits right in whether you’re hosting a small apartment gathering or camping out after a long hike.

Audio lags behind video with a one-second delay. The same goes for commands, like skipping tracks. This isn’t a deal breaker but can be annoying at times, especially when you don’t know if it’s just a latency issue or if Google Assistant didn’t hear you.

It has improved in the past few years, making it much more stable than when I initially mentioned it during the review of the SoundLink Color II or SoundSport Free. While the ability to update a device’s firmware via the app is an invaluable feature for product longevity. Once it’s stable the ability to control speaker volume and alternate between/pair to devices is great. Charging the SoundLink Micro takes anywhere from 3-4 hours via micro-USB.

This is disappointing. The speaker is listed at 6 hours of playback time, but with volume at 50 percent, listeners will be lucky to get five hours of enjoyment. According to Bose, a 1A power source will take 4 hours to complete a full charge cycle while a 1.5A source will take closer to 3 hours. That ratio of charge time to playback time—not great. On the flip side, users can simultaneously play music while charging if at home or using a portable power pack. Granted, this isn’t ideal but it’s a nice option to have. Naturally, doing so will make the already time-consuming charging process that much longer.

Should you buy this over the SoundLink Color II? Yes, there are plenty of reasons to go with this micro speaker over the larger alternative. The SoundLink Micro is less than half the size of the Color II and half the weight at 10.2 ounces. If travel is your main concern, the SoundLink Micro is going to be the better pick. Not only does it take up less space, but it can also be hooked onto almost anything, really. As one may predict, the Bose-branded SoundLink Micro and Color II share nearly all of the same features. Both can connect to an Amazon Echo Dot and both are able to access virtual assistants like Google Assistant and Apple’s Siri. Both feature multipoint connectivity, allowing for each speaker to simultaneously connect to two devices via Bluetooth multipoint. The main difference, regarding features, is that the SoundLink Color II includes a 3.5mm input. The Bose SoundLink Micro is a great companion for small outdoor gatherings from grill to the table.

Yeah, this gets plenty loud. Volume output rivals the larger SoundLink Color II but can’t quite match it. Still, users won’t away with blasting the volume a modestly sized apartment complex. As a matter of fact, the most defining aspect of this speaker may very well be its volume. Though it won’t be able to entertain a large party, the Micro can certainly handle intimate gatherings.

Its minuscule size is misleading since the SoundLink Micro is able to pump out unexpectedly strong bass. With volume maxed out while playing Stupid Rose by Kweku Collins, air movement was felt by my hand that hovered four inches above the speaker. Sure, the low-end is overemphasized, but it’s not as clear or strong as something like the JBL Link 300.

The Bose SoundLink Micro can easily fill a dorm room or medium-sized living space with music.

Collins’ vocals are reproduced clearly and aren’t masked by the low-end until the volume reaches 75 percent. Again, bumping the volume beyond 60 percent diminishes sound quality. In Stupid Rose, treble clarity drops off during the synth-solo that begins at 2:45. In all fairness, with a speaker like the Micro, volume likely takes precedence over clarity allowing for difficult-to-differentiate notes to be forgiven.

Inside the speaker sounds best. There are plenty of walls for the sound to reverberate, making the perception of sound seem louder and more full. Since there’s less environmental noise to mask the Micro’s audio, treble sounds best when indoors. On the other hand, when taking the SoundLink Micro outside, one of the first aspects of the sound signature to go is the treble. This is easily degraded by interrupting ambient noise as common as the wind. Users can just increase the volume, so long as passersby don’t give hard side-eye.

While biking, wind becomes increasingly loud and all detail is, well, gone with the wind. The volume helps a lot here, and users need to significantly increase it to hear over passing cars. Though the Micro can be wrapped around handlebars, there’s no way to get it to sound good while cycling. That said, if all you want is to hear something without fumbling with headphones, the Micro is great.

Should you buy the Bose SoundLink Micro? The Wonderboom 2 waterproof speaker can be placed directly in the pool and float about.

If you’re big on traveling and want a speaker that you can take anywhere, yes, but mainly if you’re already invested in the Bose ecosystem and have the money to spend. If you don’t fall into either of those camps, save some dough and go with the JBL Clip 3 for $10 less. Alternatively you can spring a bit more cash while still staying under the $100-mark by getting the UE Wonderboom 2. The main benefit here is that the Wonderboom 2 floats; oh, and it emits 360° sound for a more evenly distributed sound experience. For those on the fence, know this: You won’t be disappointed by the SoundLink Micro. For a compact, durable, portable speaker, this is one of the best available.

Can I use it for cell phone calls?

Yes, the Bose SoundLink Micro can be used for phone calls. The microphone quality isn't great, though. If you intend to use it for professional calls, you may want to go with a dedicated headset for conference calls.

Bose SoundLink Micro Waterproof Bluetooth speaker
9.2
The Bose SoundLink Micro Bluetooth speaker delivers sound so good for a speaker its size, you’ll never leave it behind. Proprietary Bose technology produces loud, clear sound—even outdoors—thanks to its custom-mounted transducer and passive radiators. All from a speaker that’s at home in your hand. It’s also waterproof from the inside out, has a soft but rugged exterior and tear-resistant silicone strap, so it’s ready to take with you on all life’s adventures. Attach it to your backpack or cooler, and don’t worry if it falls on the sidewalk or in the sand. And if you drop it in the pool, just dry it off and keep playing. Enjoy up to six hours of play time with a rechargeable lithium-ion battery. Pair your smartphone or tablet wirelessly and easily with Bluetooth connectivity and voice prompts. Press a button and take phone calls out loud directly through the speaker with crisp, clear Bose sound. The built-in speakerphone also gives you voice access to your phone’s Siri or your Google Assistant—directly through the speaker. It even works with the Echo Dot for hands-free voice control. Want even more sound? Use the free Bose Connect app to pair more than one compatible Bose Bluetooth speaker for Party Mode to play the same music through each. Or use Stereo Mode to separate right and left channels. Available in Black with Black strap, Midnight Blue with Smoky Violet strap or Bright Orange with Dark Plum strap. Included: Sound Link Micro Bluetooth speaker; USB cable.